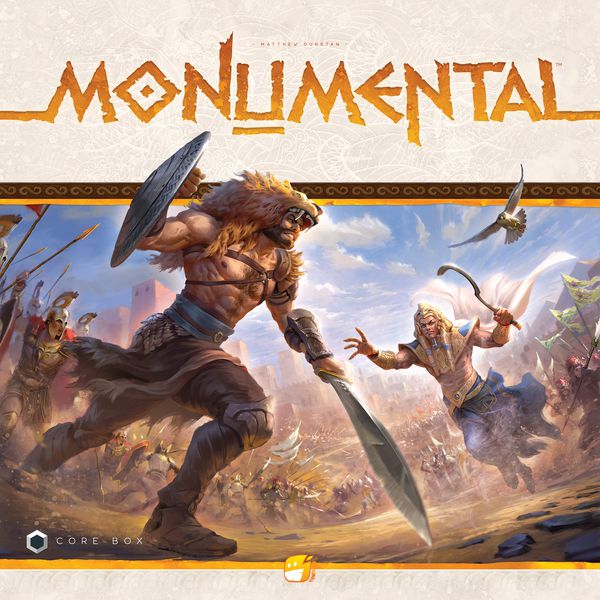 Monumental is a currently-in-Kickstarter civilization game, where each player controls a unique civilization with different cards and powers at their control. Players will interact with the modular board, as well as their individual cities, each round in order to expand their civilizations as they progress through the game’s three ages. As I talk about these different features in more detail, please keep in mind that Monumental is in development and some of these features may be changed by the time it’s due to ship in September of 2019.

The end goal of Monumental, like many 4x games (explore, expand, exploit, exterminate) is to build the most impressive civilization. Players will do this by constructing new buildings and wonders, unlocking new cultural and scientific ideas, and using their military to gain new lands. Each player starts with 15 civilization cards (which will make up your city), 5 cultural policy cards, 1 warlord card, 9 troops, 2 explorers, and 2 outposts. Each unit except for the outposts has its own art and colors, making them easily stand out in the box and on the game board. Also each warlord has different powers to aid his or her civilization in battle. The civilization cards, while similar, are also different and feature unique artwork. 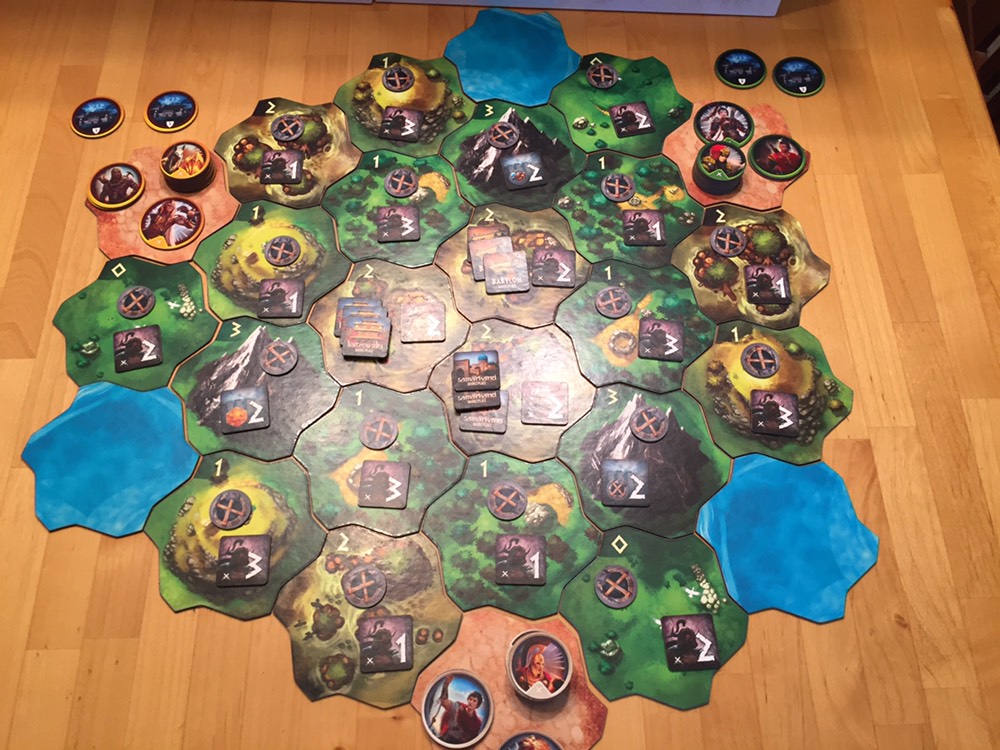 Before I drill any deeper into the mechanics, I wanted to give a quick sidebar on the art and components. If I was reviewing a finished copy of Monumental, I would give it high marks in this category. Since it is a prototype copy, not all of the art was there, and what was there is watermarked “WIP – prototype”, but it looks great otherwise. Some of the civilization or wonder cards could be frame-worthy if they were larger pieces. The component quality is high as well, with all the tokens and board pieces feeling like thick, durable chipboard. And even though they are large tiles, none of them were warped.

On player turns, they start by activating their city. Each city is made up of a 3×3 grid of civilization cards, which players activate by choosing one row and one column of cards to use this turn. These cards give production (used to build), science (used to get new knowledge cards), and military (used to move units). Players can also gain gold (used in place of production, science, and military) and culture (used for getting new cultural policies). After activating the city, players can then take as many actions as they have the resources to pay for. They may: acquire development or basic building cards, develop cultural policy, conquer a province, make a military move, set an outpost, move an explorer, or make scientific progress. 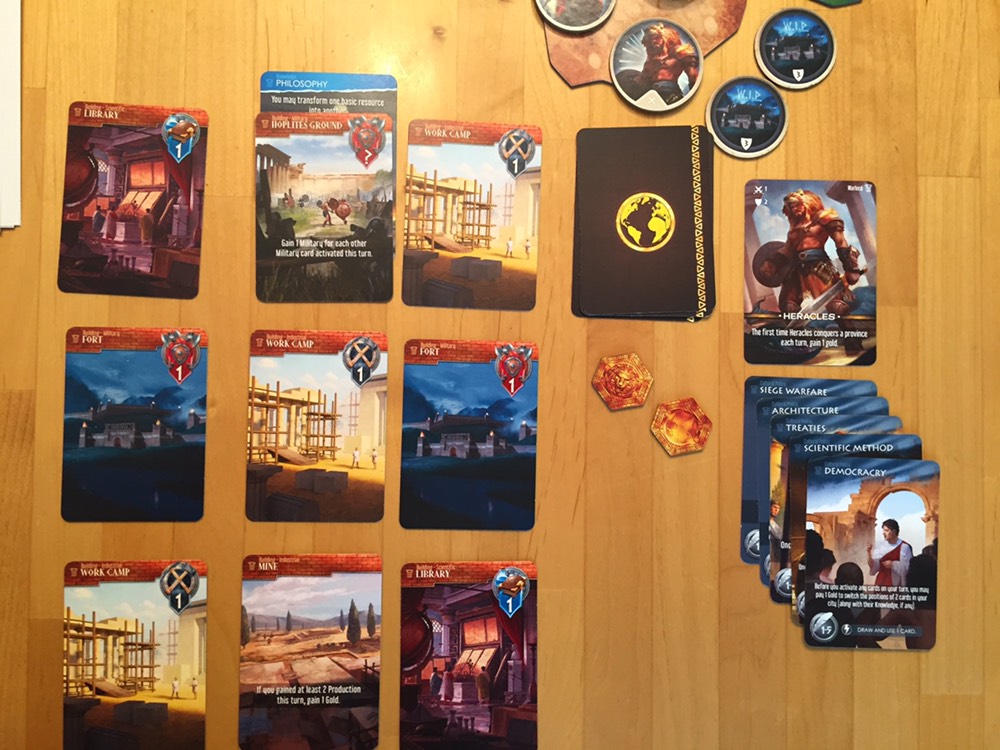 Heracles’ city, all set up for a first turn. Players activate one row and one column for a total of 5 cards to gain resources from.

Most of these actions are fairly straightforward, but the development deck is important to understand. These are more powerful cards than the three basic ones that are always available (until exhausted) and acquiring cards from the development deck is also how you drive the game through the three ages: Classic, Medieval, and Modern. The game has you shuffle the three eras separately, then place them in order with Classic age cards on top. The wonder cards also appear in this deck.

It seems like Funforge has done a great deal to try and balance the game to appeal to different play styles, and whether you want to be a conquering warlord or a cultural epicenter, you can still have a shot at winning. Players are encouraged to explore and move towards the middle of the map by all the production tokens on untouched tiles, as well as the markets in the middle of the map. There are a number of markets and market tokens equal to the number of players, and I like how this can drive players out of their corners of the map and into military encounters with each other. The end game is triggered when the last card of the development deck is dealt. Play continues until the player to the right of the starting player has gone, so everyone has the same number of turns. Scoring is based on the number of knowledge cards, any wonders or cultural policies, and each province controlled. 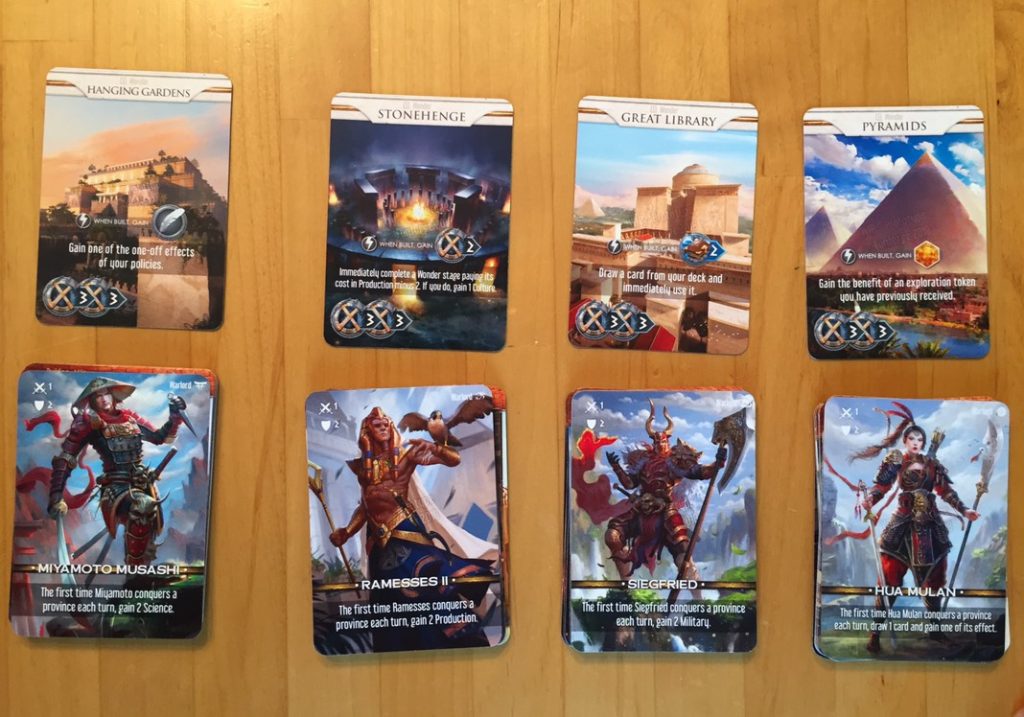 A few of the wonders and the other 4 warlords.

Monumental has a lot going on, but once all the parts are in place, it isn’t too complicated. The deck-building is reminiscent of Clank!, while the military actions are just like Smallworld (province + enemy troops + any wonders or outposts). The gameplay feels polished already, and I like how you interact with your city and the civilization cards. How the game progresses through the ages is well-done also, and makes it so no one player is left behind with inferior technology. My biggest concern with the gameplay is the potential for “action paralysis”. Players have so many options at hand, and can do as many actions as they have the supplies for, that it wouldn’t be hard to see a game round lasting 15 minutes in a 4 player game. There’s a reason why many civilization-building games include a round timer. If I had a final copy of Monumental, I would get a sand timer from another game and use it for players who were a bit too methodical.

My other large concern will most likely be addressed in the next year, but there needs to be some clarity in the iconography. Each civilization has its own 15 cards, but it took several passes through the entire game deck to notice the tiny white icons in the top corner. These could be made bigger, and called out in the rules. Also missing from the rules is explanations of what the different tokens are. I finally figured out what the culture tokens were based on elimination, but at no point in their current beta state do the rules show you what each token is. I was only able to build the 3-player map because of a small picture from the rule book. One more thing to keep in mind is table space—with 4 players needing room for a 3×3 grid, plus the game board and development track, you’re going to need plenty of room. 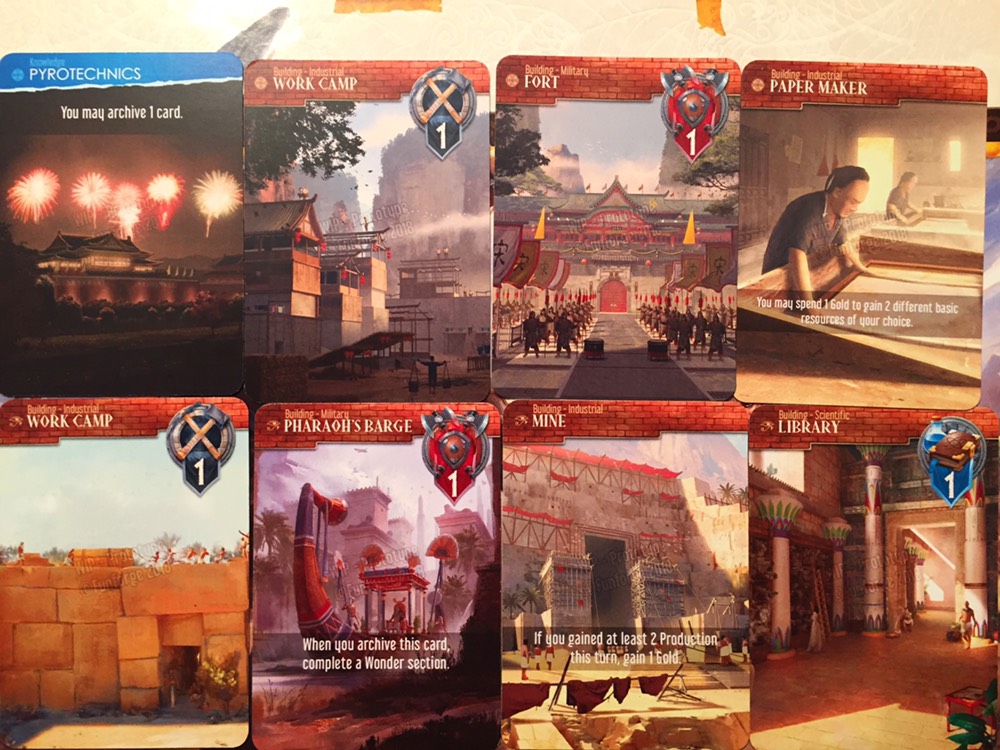 Spot the difference? It’s in the top left corner.

Overall, Monumental has a lot going for it as a civilization game. The modular tiles and different decks will give you a different game every time you play—especially if you take different warlords each time. The unique city mechanic and development deck are an interesting take on blending 4x game play with deck-building, and the Kickstarter has even more to offer if your interest is piqued. As with any Kickstarter project, I must suggest that you only back it if you know the risks and can’t live without the exclusives—but with Funforge’s pedigree, I think you’ll get a lot of bang for your buck. The Kickstarter runs until Thursday November 22nd, at 9 AM PST. 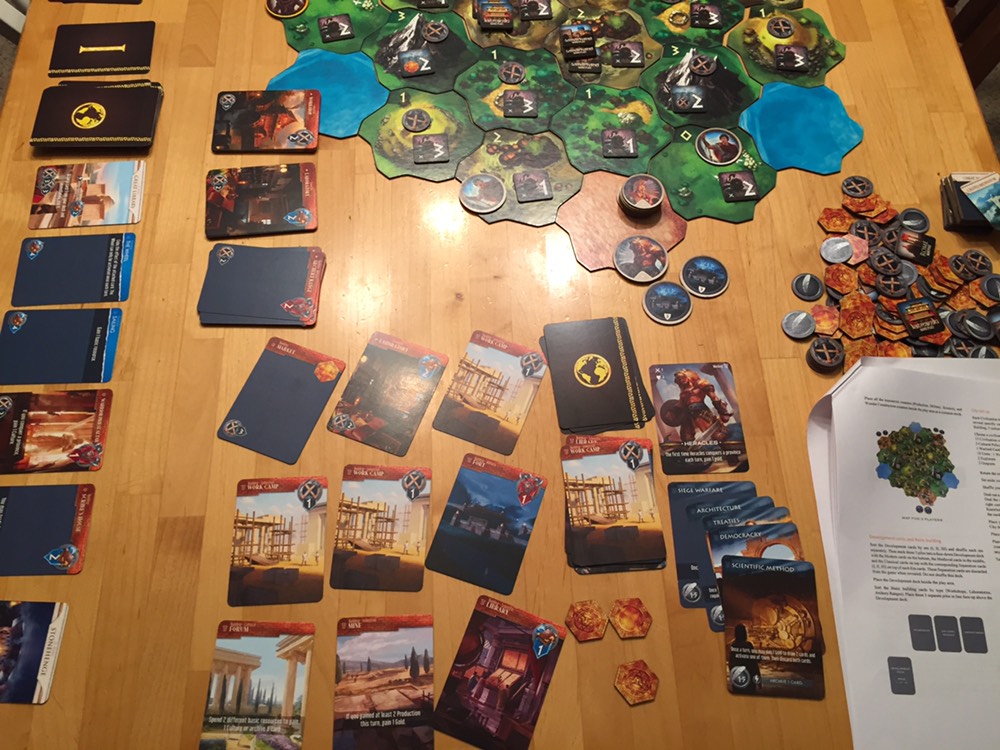 A pulled-back view of the map, city, and development track (on the left of the picture). The tapped cards are the ones I used that turn.

A preview copy was provided by Funforge.