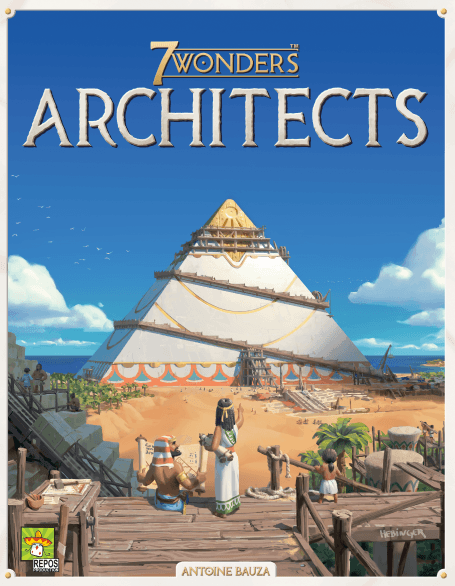 7 Wonders was a gigantic success in 2010, and is one of the most award-winning board games of all time. Since then, we’ve had four expansions, a second edition, and a two-player spinoff with its own two expansions. It also seems to me that it was the impetus for the addition of the Kennerspiel des Jahres (Connoisseurs’ Game of the Year) award; the game is just a bit too complex for the traditional family award, the Spiel des Jahres. Naturally, this means that we’re due a “family version” of the game, and here we have it in 7 Wonders: Architects. But is it any good? Let’s find out! 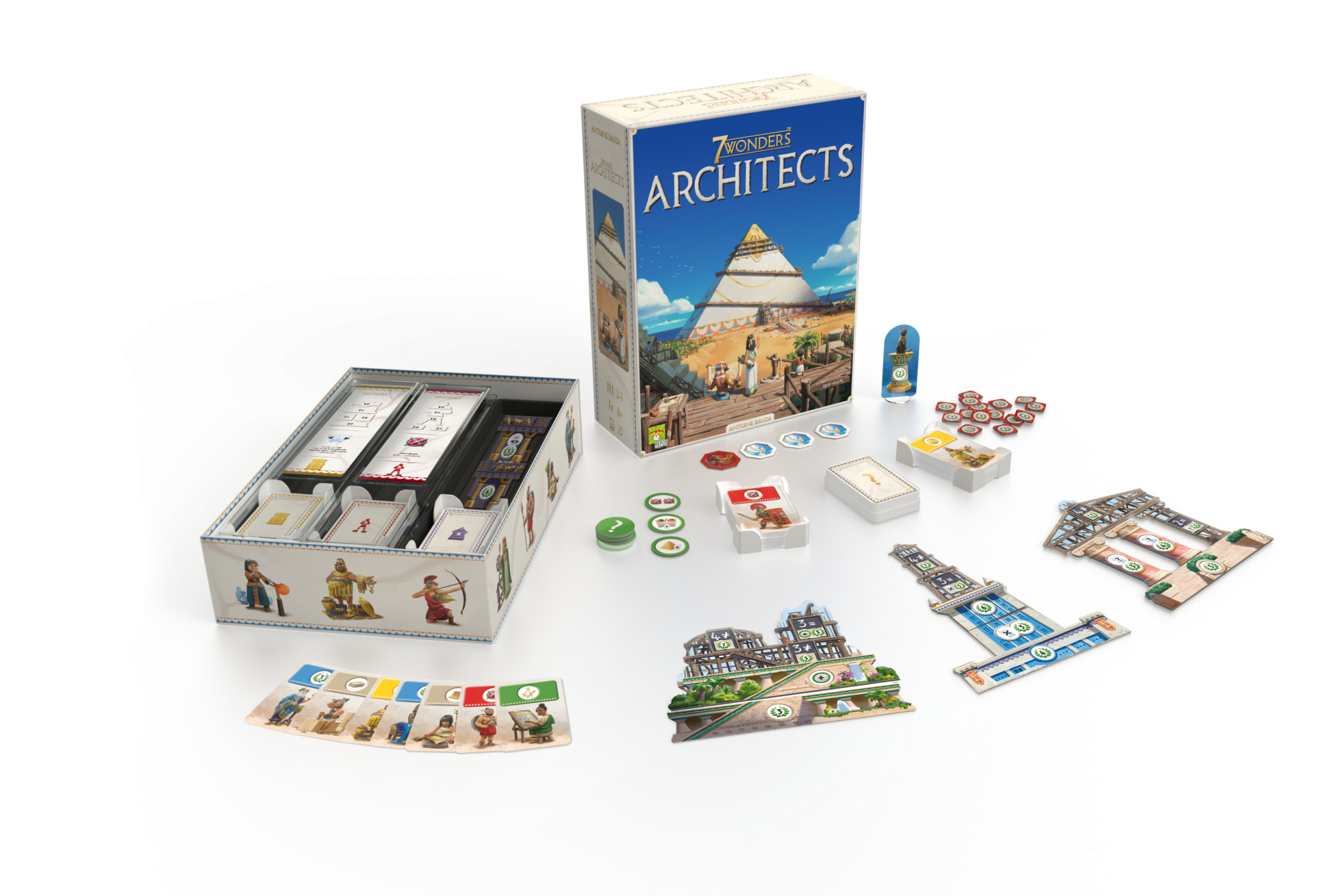 For a long time, I’ve been saying the insert and components for Res Arcana are the best I’ve ever seen. I’m amazed to say it has been supplanted by 7 Wonders: Architects! The components are all stored in individual plastic containers; nothing is loose in the box. Each player is given their own box of contents (cards and pieces of a wonder), while the very few communal pieces are also stored in their own container. I’m not a huge fan of the oddball Catan  card size, but I was also amazed to see that even with Gamegenic sleeves on the cards, the contents all fit back into their plastic containers! (My Ultra Pro Catan sleeves were slightly too long.) While the “construction” of the wonders is clearly meant to appeal to kids, I also found it extremely fun to do even as an adult. While the $49.99 price tag is high for an introductory kids/family game, the components live up to the premium price tag.

And this really is an introductory game. After reading the rules, I was quite afraid that the game would simply be too boring to be worth it. All you do on your turn is take a card, and maybe cash it in for things. Then it occurred to me: that’s literally all you do in 7 Wonders or 7 Wonders: Duel. Still, it’s undeniable that Architects is a major step down in complexity. Resources have very little meaningful difference, other than that players are trying to collect all-same or all-different sets for their wonder. Likewise, science is purely for collecting advantageous tokens, and the turn-based card drafting has players selecting from far fewer cards in a way that allows experienced players to help. There is still a modicum of strategy, but this is not something you’d reach for at game night over its big brother.

What you would do with this game, however, is use it to introduce the game world to families and older kids. My 7-year-old has played her share of family board games like Bärenpark, Summer Camp and Cat Lady, and she was able to play this fine, though there were a few minor points of confusion (e.g. Gold is a wild resource but not a wild Science symbol). At the beginning of our first game, she seemed too put off by the rules’ difficulty, but by the end, she was ready to play a second time.  It’s also worth noting that, unlike the original, this game works quite well with two players, so it can also work really well as a parent introducing one child to the game world.

Although Architects is a bit pricey and advanced for a kids’ game, it gets a few key things exactly right for that “kid appeal.” First and foremost, of course, is the way that players actually “build” cardboard replicas of the different wonders. This is the main draw for this age, and it’s also very fun to trigger different special abilities as you work on the wonder. There’s also a cat token, which is like, well, catnip, to a little kid. Furthermore, if you have the cat token, you can peek at the top card of the central deck, and what’s more fun than a little “I know something you don’t know; nana nana boo boo”?

Ever since 7 Wonders came out, I’ve argued with many people that the game is more complex than they give it credit for, and was deserving of the Kennerspiel des Jahres award it received, rather than the traditional family award. But it’s still one of my favorite games of all time, and having an introductory game that can introduce the general concepts to my budding gamers is just a treat. Add in some of the best components and storage I’ve ever seen, and I can’t help but give this one a strong recommendation.

A great introduction to one of the best games of the past few decades.