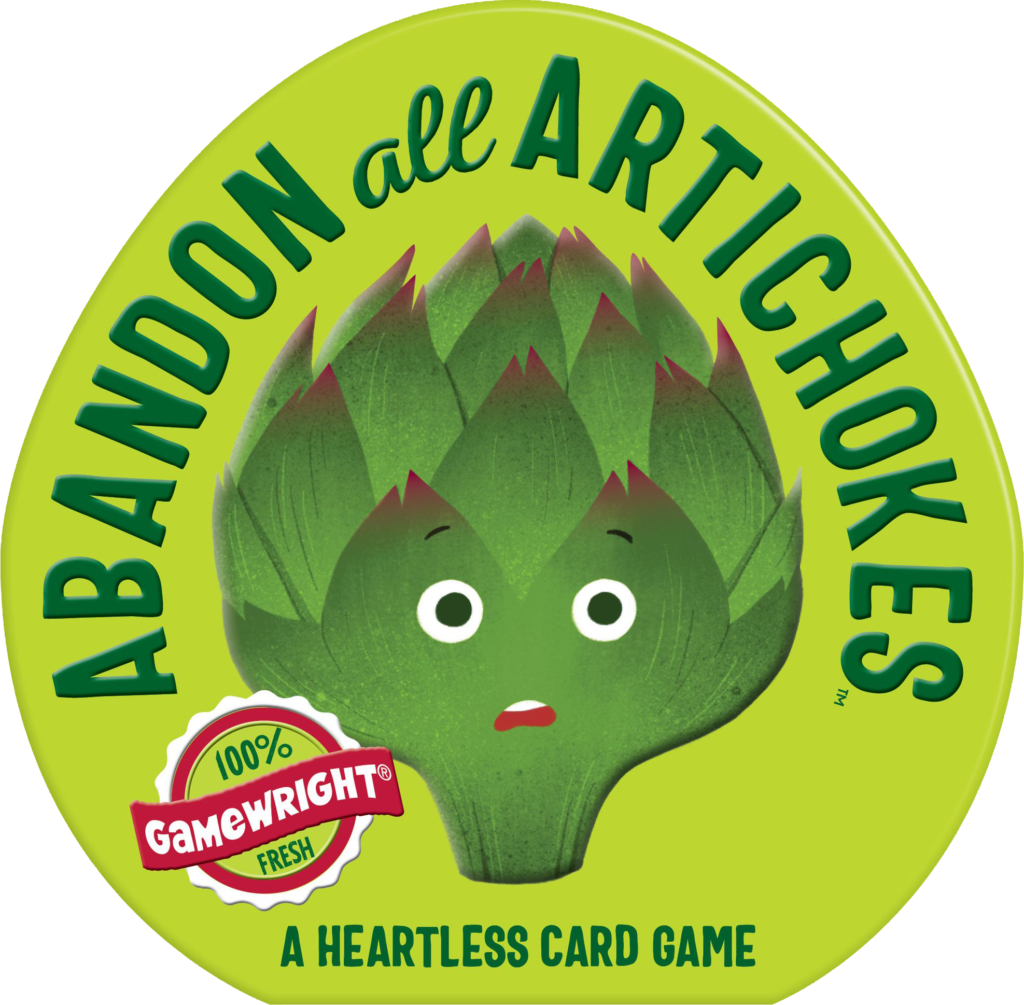 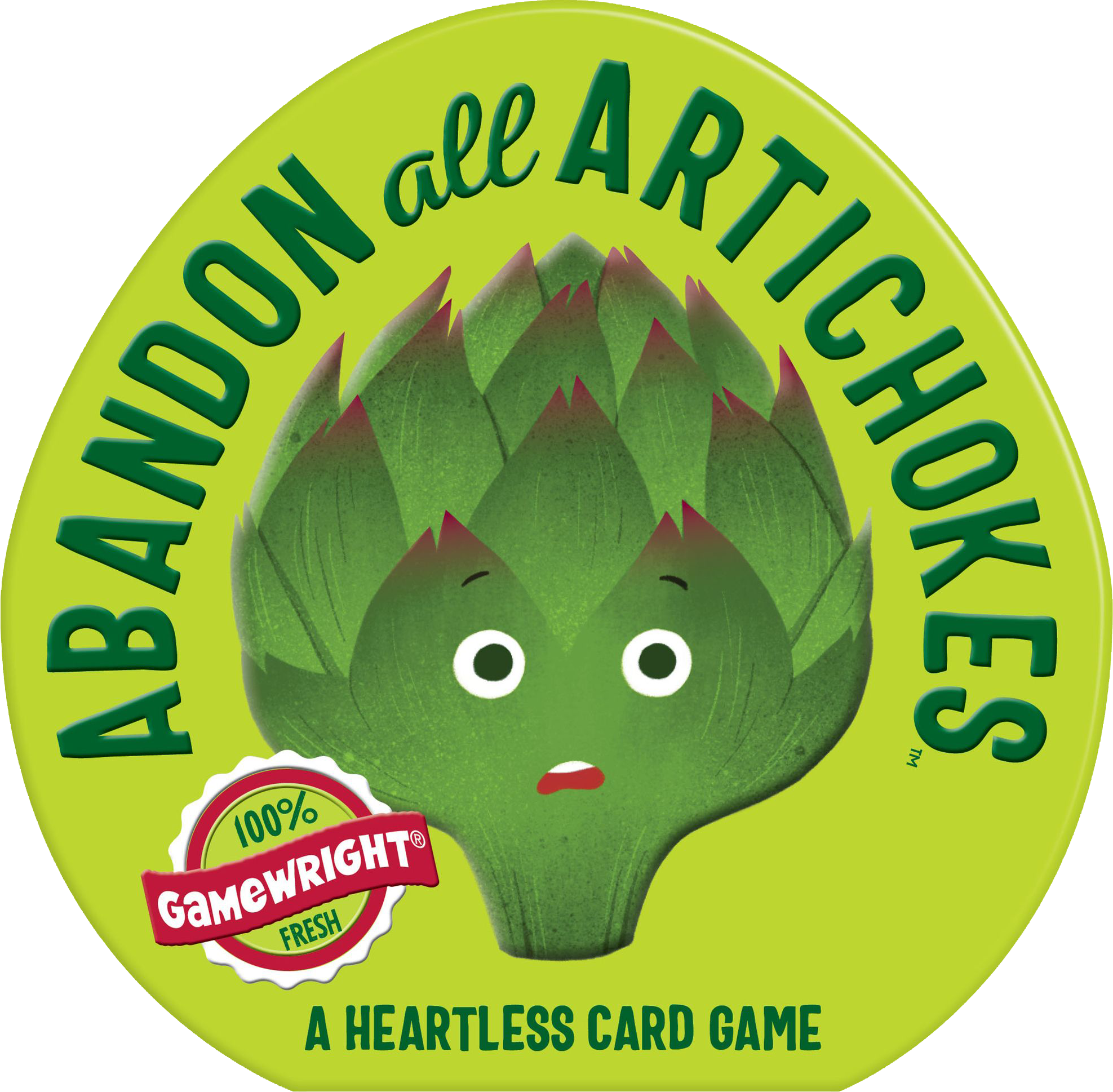 I couldn’t tell you why, but it seems that vegetables are a common occurrence in board games, going all the way back to 2007’s Agricola. Recently, we’ve had Point Salad, a drafting game entirely about combining different sets of vegetables, and now Abandon All Artichokes. In this introductory deckbuilder, players must get rid of their disgusting artichokes to win, and use other vegeterables to do so. But could a game about vegetables be fun!?

I am jealous of this game.

I’ll never actually take it anywhere, but occasionally I like to pretend that I’m a game designer. And I keep thinking that there could be some more seriously good games in the design space where players simply take a card on their turn from a tableau, and don’t do much else. Abandon All Artichokes nails this concept. Who needs economies when you have vegetables?

On a player’s turn, they take a card to their hand from a row of five cards, then play any actions they want to in their hand, draw, shuffle if needed, repeat, like most deckbuilders. It’s a game that sounds like it has almost nothing going on. In fact, your ten starters are completely useless, even worse than the Coppers in Dominion! It’s like starting with 10 Estates worth 0 points each! And that makes this design all the more clever. 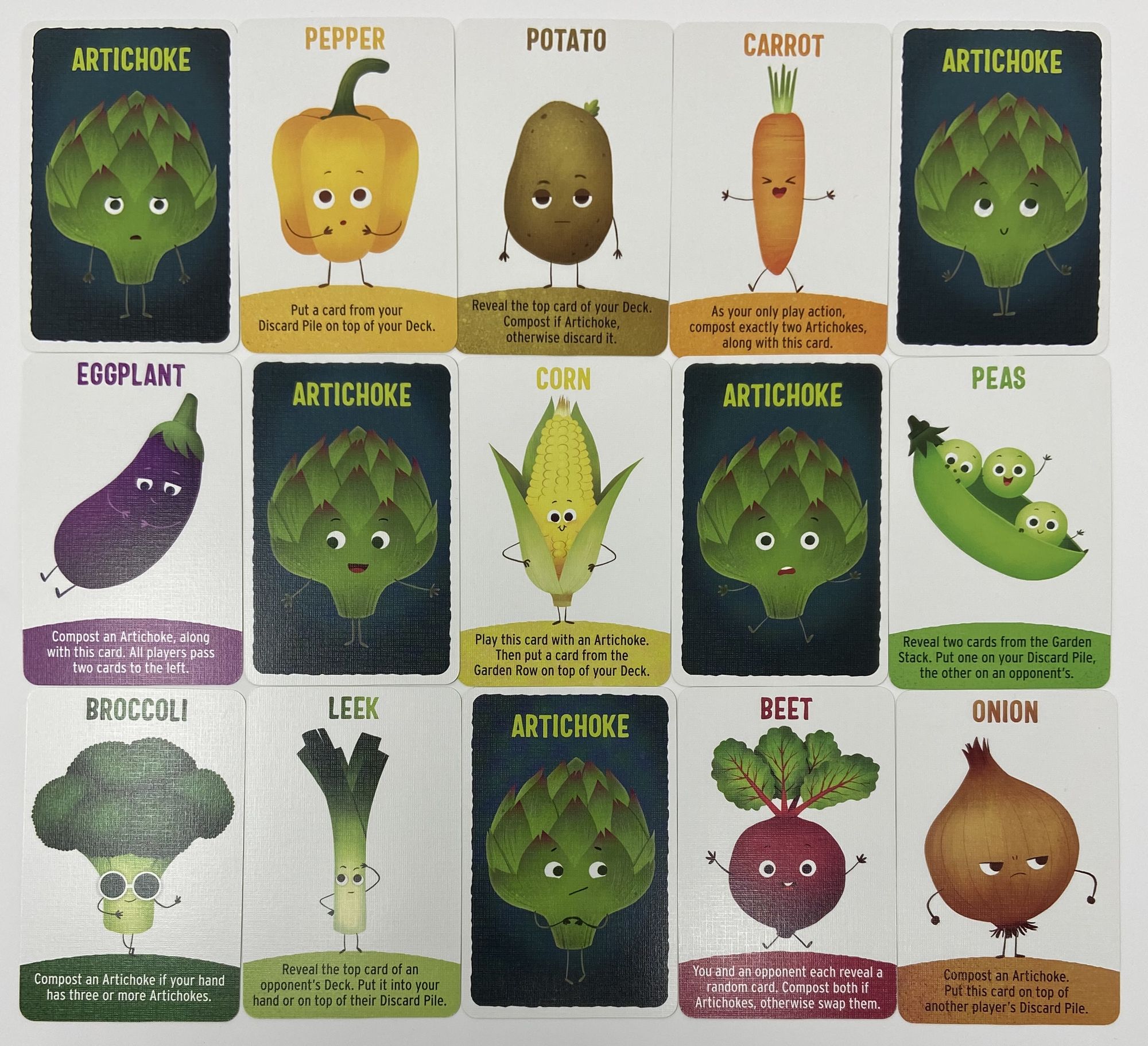 Abandon All Artichokes doesn’t mess with money, and it doesn’t mess with victory points, either. Winning is simple: when you draw five new cards at the end of a turn, if it has no Artichokes, you win. The various other vegetables that you draft to your hand give you a variety of ways to try and manipulate your deck to make this happen. I’ll admit I was skeptical: are there really 10 different card effects that can fit in this design space? Yes!

Trashing (“composting”) your Artichokes is not the only way to win. Remember, you only need to draw one hand with no Artichokes. A card like the Pepper (put a card from your discard pile on top of your deck) that has been used in so many other deckbuilders suddenly has new meaning here. One way to win is simply to flood your deck with non-Artichokes, or stuff the top of your deck with them so that you draw five good cards in a row. The Eggplant and the Beet are basically variations on Dominion’s Masquerade card, but again, with this new context, it feels completely different.

So while there’s a lot more going than it first appears, the game is actually quite simple to play, and it teaches the concept of deckbuilding extremely well. Not only do players learn the concept of drawing cards that they’ve gained on prior turns, but the entire emphasis of the game is on trashing/scrapping/composting your cards, which is often a hard lesson in deckbuilders. (I remember my first game of Dominion in 2009 vividly, buying Coppers for no reason until we basically got stuck.) I’m not sure deckbuilding veterans will want to bring it out often when there are more advanced deckbuilders that don’t take too much longer, but it is a great introductory tool.

Well, with one exception. My 6-year-old daughter can play this game completely fine, except that for some reason, all of the cards explain their effects using text instead of symbols. While this might be preferred for older players, this game could easily be for ages 6+ or 8+ instead of 10+ if they had gone with iconography instead of text. Younger kids may just be able to memorize the effects after a while since there are only 10 unique cards, but this is one rare instance where I would have vastly preferred icons.

I also wish the game came in a box and not a tin. I hate tins! But, you know, now I’m nitpicking.

The artwork is fun and eye-catching. The game is a measly $12.99. It’s fun to play, and possibly the best way to teach people the idea of a deckbuilding game. For that purpose, it comes highly recommended.

Thank you to Gamewright for providing a review copy of Abandon All Artichokes.

Abandon All Artichokes is a fantastic way to introduce children to deckbuilding, and it's fun for the adults, too.