Review: Abomination: The Heir of Frankenstein 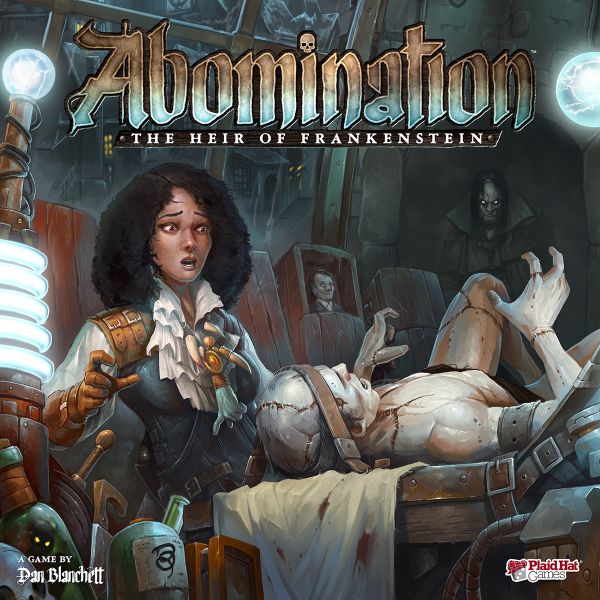 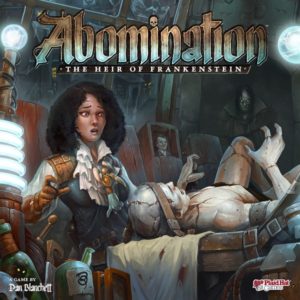 Abomination: The Heir of Frankenstein is a deeply thematic game of worker placement and resource collection. Narratively, it takes place 20 years after the events of the Mary Shelley classic, as a new generation of mad scientists attempts to continue Dr. Frankenstein’s work.

Though this game is well-designed mechanically, it is extremely disturbing, both in theme and visuals. True to the source material, the imagery is very dark. It has loads of blood, guts, murder, corpses, selling bodily organs, and a strong theme of resurrecting the dead. It is most definitely NOT a game to play with kids or folks who struggle with horrific themes.

I love horror board games, so I was immediately drawn to the theme of Abomination: The Heir of Frankenstein. Plaid Hat Games has an amazing track record of deeply thematic releases, so I couldn’t wait to check this one out. This worker placement game is closely tied into the classic Frankenstein story, taking place a number of years later. Captain Walton is now an old man, still chasing the monster as a few mad scientists are trying to continue the Doctor’s macabre work. 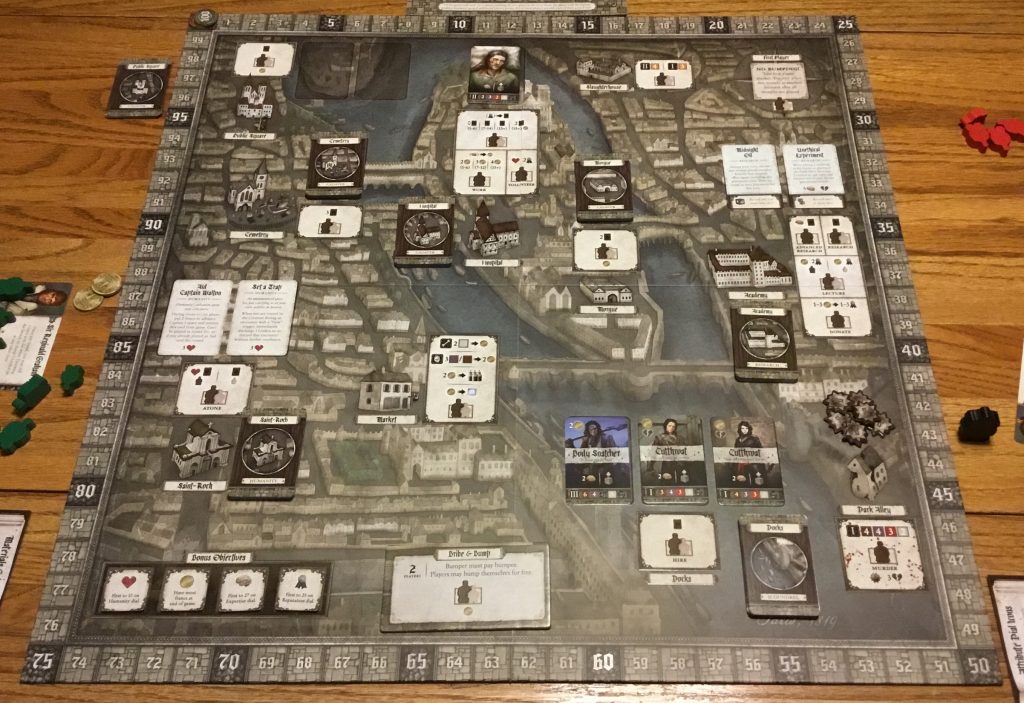 The goal of the game is, of course, to create a new monster. Each round begins with the first player drawing a card from the event deck, which consists of event and encounter cards. Events generally change the rules for the current round, and encounters are either resolved immediately or kept hidden until a player enters a particular location. (Think Crossroads cards in Dead of Winter.) Sometimes these events will also include public executions, which create cadavers for players to harvest, or lightning storms, which provide the electricity they need to do their experiments.

After the event has been resolved, players take turns placing their workers on the board. Workers come in two types: scientists and assistants. Some spaces can take either type, but others require a particular one. As with most worker placement games, the challenge comes from a tight board with limited options. This is where the “bumping” mechanism comes in. If a player wishes to place a worker on a space that it full, she can “bump” the existing worker by paying them a certain amount of money. There are only a limited number of bumps allowed each round, so players’ decisions become more restricted as each round goes on. 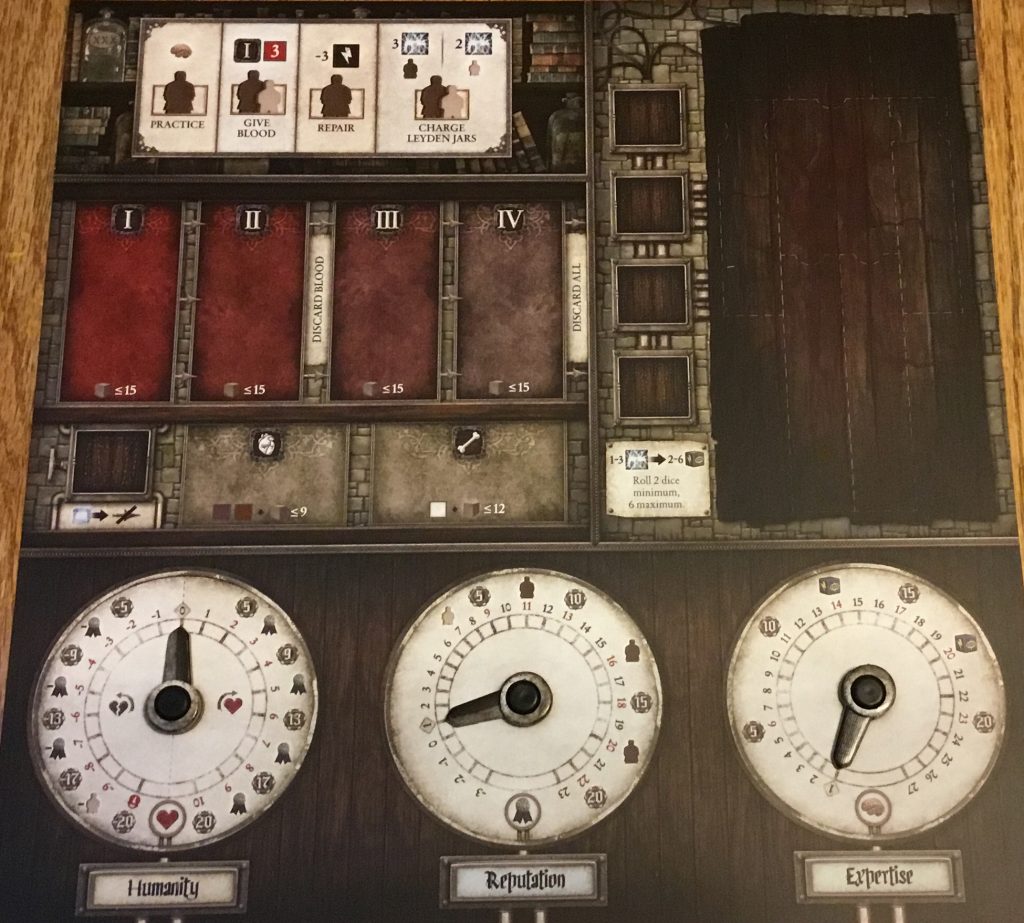 Workers can do all manner of dark deeds, from digging up corpses to gathering animal parts from the slaughterhouse. Additionally, they can research, give scientific lectures, or even atone for their sins at the local church. As these actions are taken, players will collect body parts, and their stats will modulate. Players have Humanity, Reputation, and Expertise characteristics, all of which will prove necessary to winning the game. 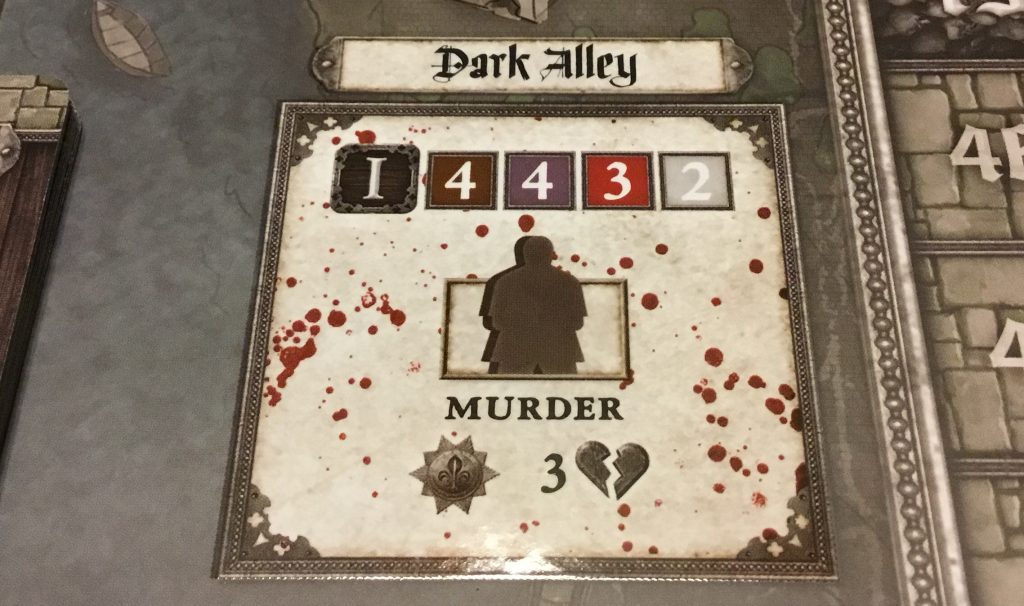 Once all workers have been placed, players move into the Lab Phase. Here, they can take the resources they have collected and attempt to build parts of the monster. Each body part has a requisite number of materials needed to construct it, so a player has to discard the indicated cubes every time they wish to build. Additionally, they must be of a certain level of expertise to perform the grim procedures. If a player wished to start building, for example, a head, she would need 10 expertise, as well as 2 brown, 3 purple, and 3 white cubes. She earns victory points based the most decayed material she used – the fresher the body parts, the better. If the player used any animal parts, she will earn fewer points. 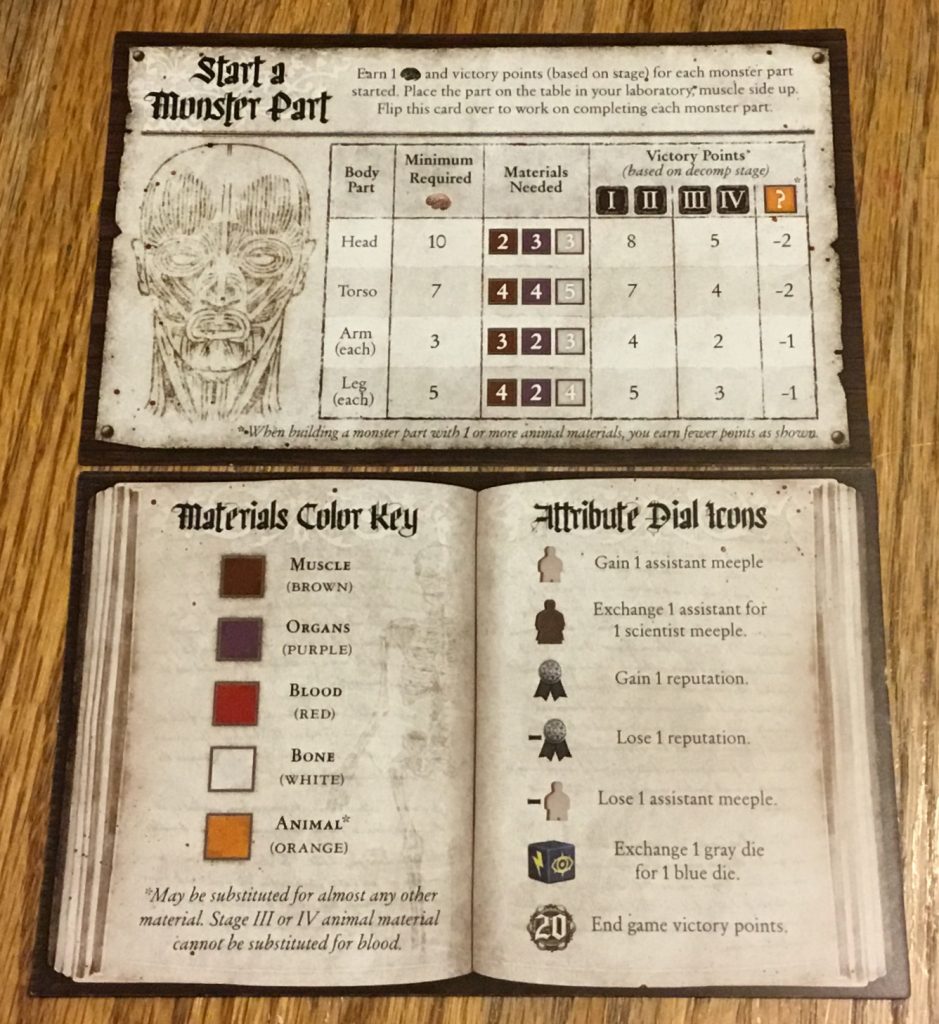 Building body parts is a 2-step process. First, players need to construct musculature, and then they can add skin. This means that, to build a complete creature, they will need to perform at least 12 operations (6 pieces, twice each), perhaps more, as I’ll explain momentarily. 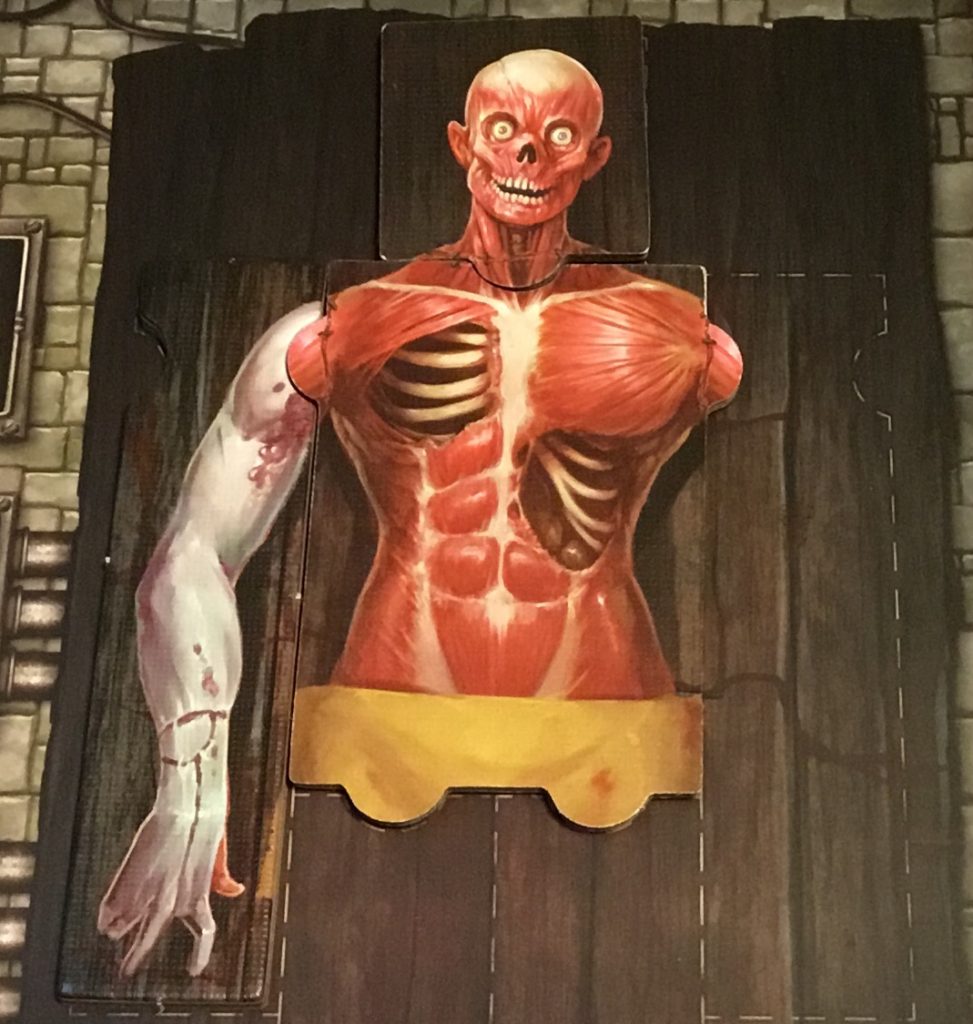 If a player has a completed body part on her tableau, she can attempt to “throw the switch” to bring it to life. To do this, she spends a number of Leyden jars of electricity and rolls twice as many dice. Depending upon the result of her roll, the body parts on her tableau could come to life, but they could also get damaged and possibly downgraded or destroyed.

The game ends either when a player has brought their monster to life (with the obligatory exclamation “IT’S ALIVE!!!”), or when Captain Walton reaches the end of the game’s time track. At this time, players total up their scores and the player with the highest score wins.

Abomination is really something. Most of the horror games I have played are silly-fun, like Zombicide or Betrayal at House on the Hill, games that don’t take themselves remotely seriously. Abomination takes itself VERY seriously, even more so than Dead of Winter, which sets it apart from the rest. It is dark, disturbing, and in-your-face, which may be a good thing or a bad thing, depending upon players’ opinions of the horror genre. 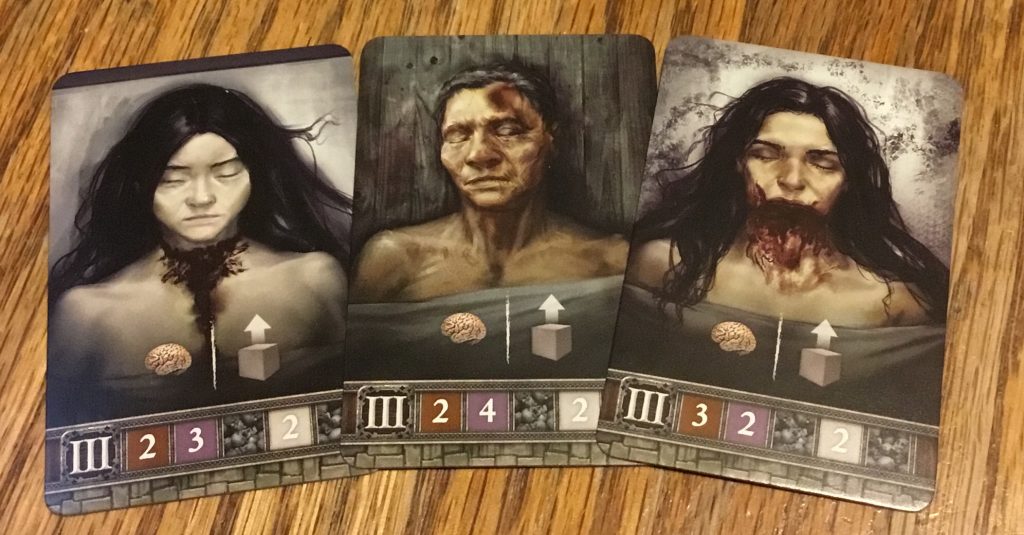 The attribute dials are one of my favorite aspects of this game. They draw players into the narrative by making them wrestle with the implications of their grotesque experimentation. The idea that a player is losing their very humanity makes their decisions feel weightier, and it’s something that might sit with players long after the game is over.

This brings up another thing I really like about this game. To draw a parallel to film, in my opinion, the best movies are the ones that remain in viewers’ minds after the credits, the kind that they are still thinking about weeks later. Abomination is a very unsettling game, but I found myself carrying that discomfort with me after the game had ended. Now, I realize that might sound like a negative, but I actually mean it as a positive; basically, this game was so immersive that it left a lasting impact on me.

Everything about this game feels thematic, even its minutiae. For example:

Small details like these help to seamlessly integrate the narrative. All of the locations fit their actions well and help to immerse players in the game’s world. This blending of theme to mechanisms makes the game a bit easier to teach, as well, since everything “makes sense” in terms of the story.

That said, despite the strong theme, I do not foresee this game having much long-term replay value. I suspect that after a handful of plays, most folks will feel like they have explored all that the game has to offer. There are likely to be variations in narrative text, events, etc. from one play to the next, but the general game arc will be largely the same each round.

Abomination’s production is as good as I have come to expect from Plaid Hat. Everything looks and feels nice, with the exception of the chintzy plastic cubes; I would have much preferred them to be wooden. The dice and meeples are nicely detailed, and the game box is sturdy. (Side note: it also looks great on a shelf next to Dead of Winter.)

Due to the length and morbidity of this game, it is certainly not for everyone. Mechanically, it is well-designed (if a rather long endeavor to play), but its theme is intense enough that I would only recommend it to adults who really love horror and enjoy longer, more involved games. For the rest of the gaming population, I recommend sticking to other, less murder-y worker placement games.

Abomination is a solid game that mixes ameritrash theming with euro design. I enjoyed it, but due to its incredibly macabre theme and artwork, I would primarily recommend it to those who really enjoy the horror genre.