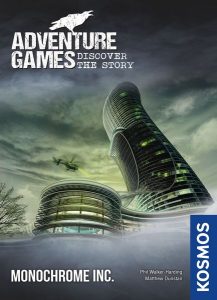 Adventure Games is a new line of escape-room-style card games from KOSMOS. The first two entries are The Dungeon and Monochrome Inc., featuring a fantasy dungeon and “evil corporation” theme, respectively. They work much like classic point-and-click video games, with players exploring the map, finding items, and combining them as they uncover a larger narrative. From accomplished designers Phil Walker-Harding and Matthew Dunstan, they offer engaging stories and replayability not always found in this genre.

The Adventure Games series feels like a spiritual successor to the popular EXIT series. As is the case with EXIT, these new games have players working together to explore their surroundings and find a way out. However, while the EXIT series consists of one-shot experiences where components get ripped up, drawn on, and otherwise destroyed, the Adventure Games are multi-session stories that offer some replay value.

Like any escape room game, the fun of the Adventure Games comes from discovering their secrets. As such, I will try to keep this review as spoiler-free as possible.

Speaking in broad terms, the Adventure Games focus much more on story than on puzzles. They are turn-based, which differs from every other escape room game I’ve played. In my experience, tabletop escape games often devolve into just a mess of components on the table, with everyone staring at them until something jumps out. In contrast, the turn-based nature of the Adventure Games gives their experience a more structured feel. 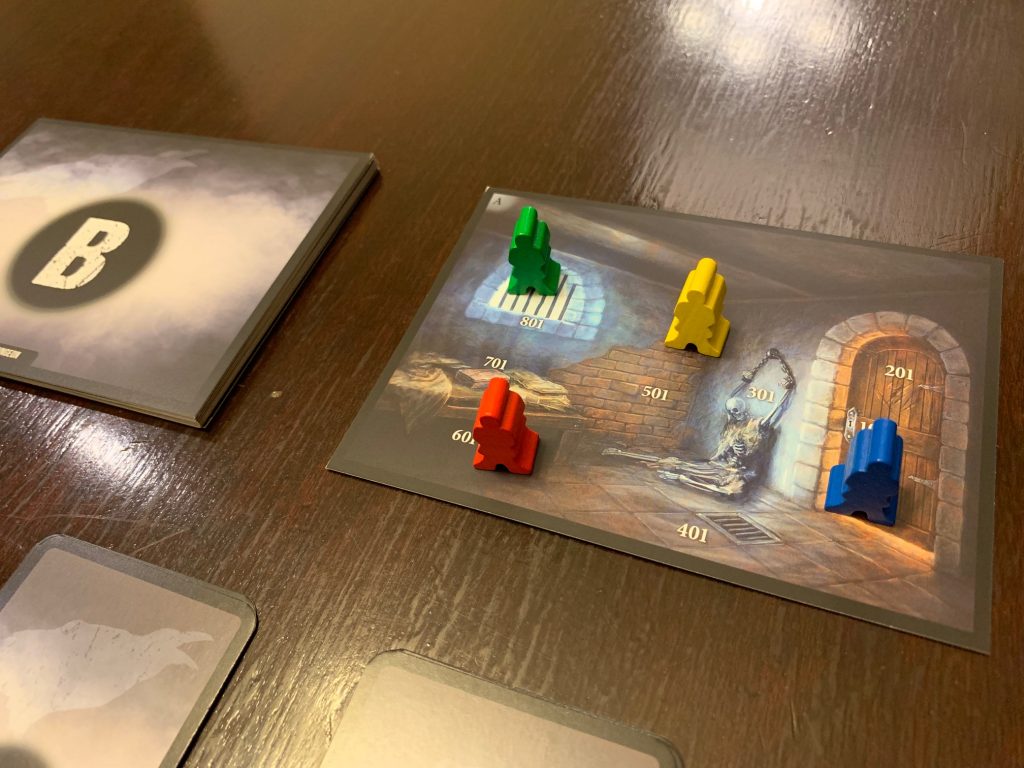 That said, perhaps the greatest difference from other, similar titles is the Adventure Games’ strong, written narratives. One of my all-time favorite games is Tales of the Arabian Nights, a game where every session yields unforgettable, theme-drenched story experiences. The Adventure Games have a similar vibe, with an enjoyable, if simple set of puzzles thrown in. Each one comes with a thick book of numbered encounters, and as players progress, they can use items and locations to trigger them.

Each item has a 2-digit number and each location has a 3-digit number. To give a made-up example of how an encounter might work, suppose the players had found item 16, a dead flashlight, and item 21, fresh batteries. To combine them, the players would read encounter #1621, a number made from combining both of the cards’ identifiers (16 and 21). 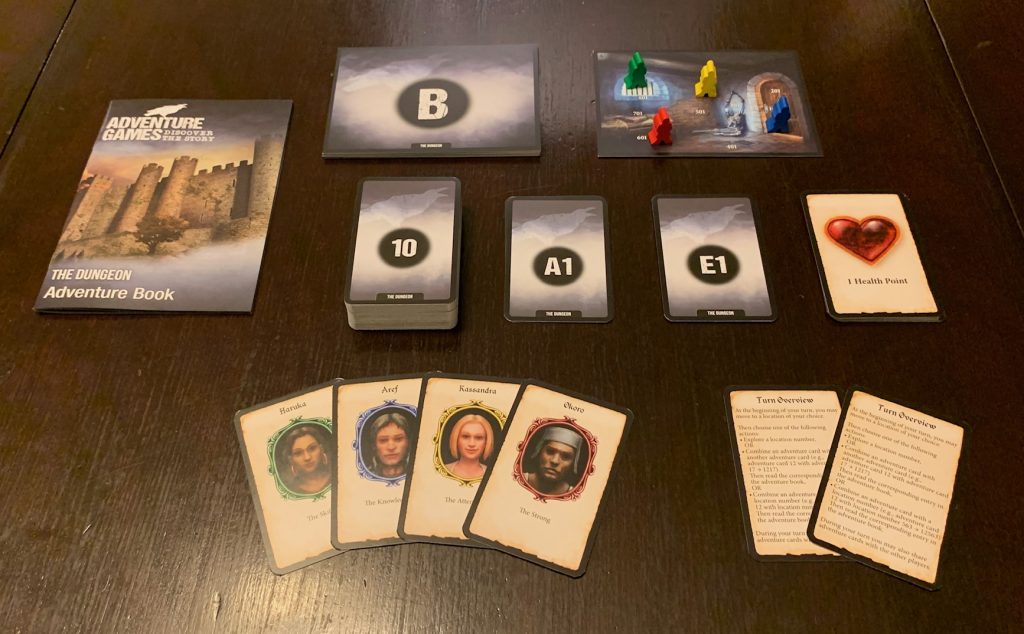 Encounters can also occur by using an item at a location. Suppose players later found item 30, a shovel, and wished to use it at location 402, a pile of loose dirt. They would then read encounter #30402, again, made from combining the pair of identifiers. This encounter-numbering system is extremely elegant and intuitive, and I like it a lot.

The first 2 Adventure Games both contain 3 “chapters.” Each chapter takes 60-90 minutes, so players can either choose to play them over a series of nights, or power through the entire story in a single, epic session. To that end, unlike other escape room games which either 1) cannot be replayed because they are consumable, or 2) can be replayed, but the game-arc doesn’t change, the Adventure Games can be replayed with the possibility of variation. To avoid spoiling any substantive content, I’ll explain how using an out-of-context example:

The text on this card instructs the active player to resolve an encounter, but which encounter depends upon which character he or she is playing. This means that the outcome of a particular card could be completely different from one playthrough to the next! The overarching, macro narrative should remain pretty consistent, but subtle differences like this give the game some extra mileage.

A free smartphone app is also available to guide the gameplay, if players wish to use it. It features a detailed, step-by-step walkthrough of the setup…

…as well as audio narrations for each encounter in the book.

The game can be played with or without the app, depending upon players’ preferences. If reading the text themselves helps players to feel involved in the action, then they can stick with their own narration, but if they prefer to let the app tell the story, they can do that, too. The app’s interface is user-friendly, and I like that it provides extra content for other KOSMOS games, as well!

The Adventure Games are my new favorite tabletop escape rooms. While I have enjoyed the majority of the EXIT, Unlock!, and Escape the Room games, this new series offers more cohesive, engaging narratives than any before them. When it comes to board games, thematic immersion always enriches the experience, and these games really deliver in that regard. They provide memorable moments of humor, tension, and excitement, making for awesome gameplay.

Now, to be fair, I know that not every gamer craves story and theme that way I do. As such, when deciding between, say, an Adventure Game and an EXIT game, it’s worth considering what you want out of the experience. If you like escape room games for the tricky puzzles, then EXIT might be the better choice; those games emphasize puzzles first and foremost. However, if, like me, story and theme are what you look for – if you love games like Arabian Nights, Mythos Tales, or Sherlock Holmes: Consulting Detective – you will really dig the Adventure Games. In my opinion, they are the best escape room games yet. I cannot wait to see the next installment of this series.

As a fan of story-rich games, I really, really like this series. It is a different take on the escape room genre, and I highly recommend checking it out.