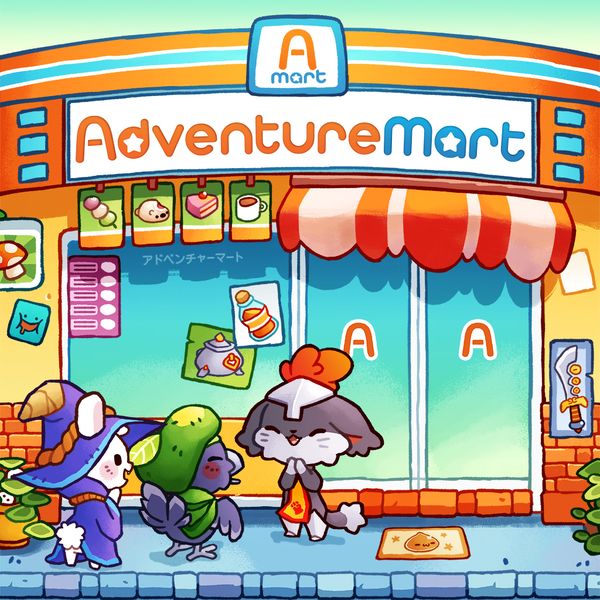 In Adventure Mart, players are vying to be the best store manager over the course of five days as they try to get better items in stock and attract customers in the form of travelling adventurers. After the week is over, the manager with the highest profit wins! Think you have what it takes to run Adventure Mart?

The game uses magical items, shrines, and references other uses of magic in the flavor texts. Witches and hellfire are both mentioned. Several Fixture cards feature shrines with chalk stars drawn on them, with candles or other items around them.

Adventure Mart has a cute look that seems like a cross between Hello Kitty and World of Warcraft. Based on its visual design, it looks like it would be a good introductory game for kids or new gamers, to show them how a card drafting game with light economic abilities might work. However, that is not what I experienced when playing. Adventure Mart has enough going on that it’s actually a much more complicated game than the art would imply. 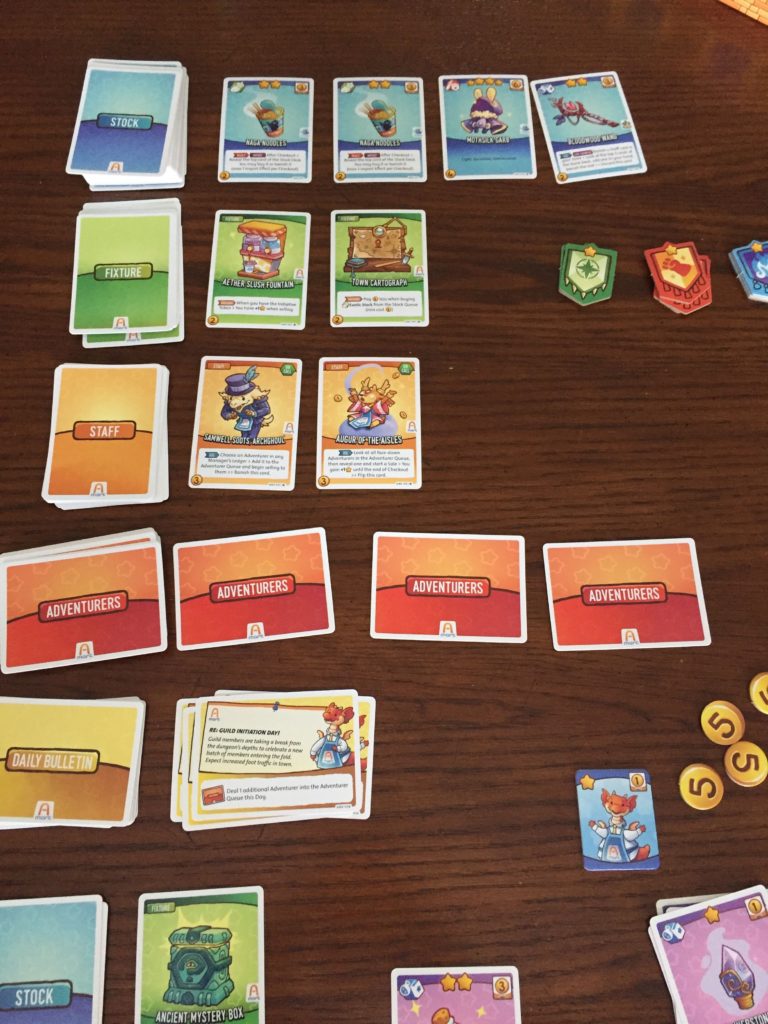 Perhaps it is a failing on my part to assume that something that looks cute would be easy or a lighter game – and to be honest, it’s not “heavy” in the sense that there’s too much complication, but I did leave the table feeling like the game could be simpler or the rules could have been a bit more explicit.

To play the game, each of the four rows of cards are restocked each morning – Stock, Fixtures, Staff, and Adventurers. Stock are high-quality items to make your hand of cards stronger, often with helpful abilities. Fixtures are items that stay in your store and usually help when buying items. Staff help you in various ways, but you have to rehire them every work day or they get discarded; er, rather, banished to the Abyss. Adventurers are only flipped over when someone wants to sell to them. At that point, you find out what kind of items they are looking for and what abilities they have. Players take turns either buying cards, making sales to Adventurers, or using card effects until the last Adventurer has been sold to, then everyone gets a final turn that round. When selling to Adventurers, other players can make better offers to try and snipe your customer, usually resulting in a bidding war.

It doesn’t sound overly complicated, but with three types of stock (Martial, Magic, and Exotic), Fixtures, Staff, bonuses from past customers, and adding the daily bulletin, it quickly spirals into a “Stop the game so I can stare at my cards to make sure I’m adding this all up right.” Something just didn’t click for me even though I like card-drafting games and was looking forward to Adventure Mart. It looks kid-friendly, but out-bidding and sniping sales and some of the take-that you can accomplish in the game are decidedly more adult in their execution. For example, there’s a Staff card that lets you take an Adventurer out of another player’s ledger (where they go after a sale is done) and put them back out and start selling to them again. The Padawan I was playing with agreed that that was a mean card. 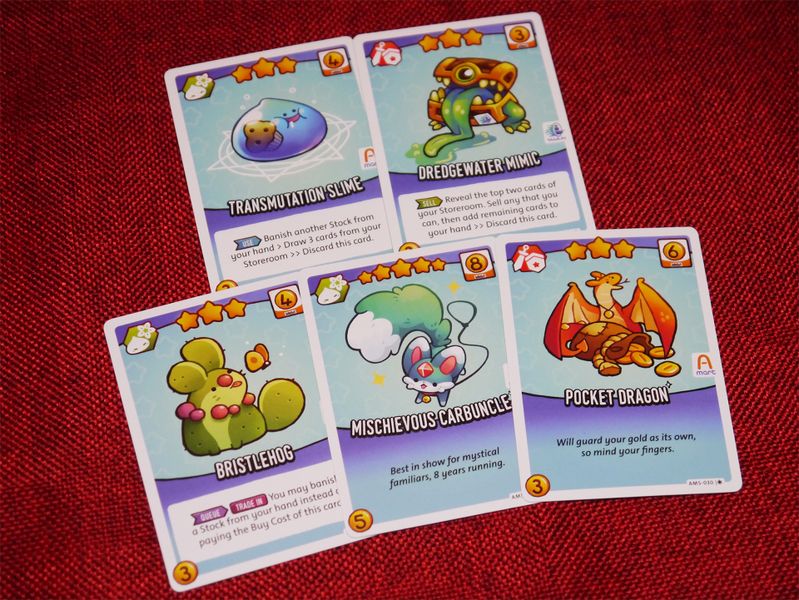 The cards themselves are a nice thick stock, and feel a little thicker than your average playing card – which is nice, since you will be holding and shuffling them a lot. The tokens and coins are all the standard thick cardboard, and punched out easily. The art is cute fantasy – friendly looking dragons in shirts and ties, cartoony animals in adventuring gear – even the mimic is non-threatening (but a bit slobbery).

I don’t have a whole lot bad to say about Adventure Mart, other than I wish the rules were a bit clearer (I read them three times and watched a video) and that the game was either a little more kid-friendly or less cute-looking. I have no doubt there is an audience for it, it’s just not me. If you’re looking for a new drafting game with light economics and bidding, Adventure Mart might be worth a try.

If you’re looking for a new drafting game with light economics and bidding, Adventure Mart might be worth a try.