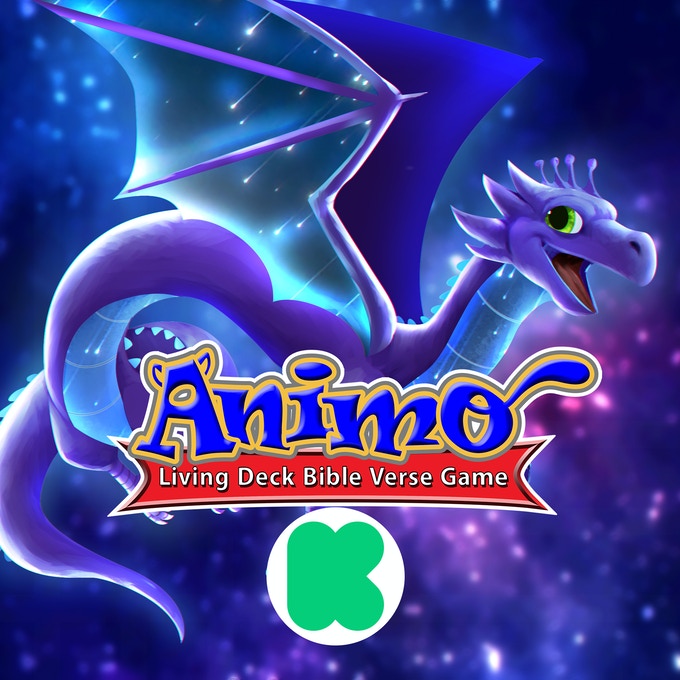 Animo is a living deck, trading-card game based heavily on Pokémon. All cards have scripture verses on them, and the game strives to be both mechanically and theologically sound. Does it fulfill its ambitious goal, or does it flop like so many scripture-based games?

The creators of Animo said they wanted to borrow mechanics from Pokémon and add a few of their own, and it shows in the gameplay. This is not a bad thing, as Pokémon is one of the most successful card games out there. The main differences are that the titular Animo are used to score points (they don’t directly battle each other), there aren’t as many trainer cards, and power cards don’t need to be directly attached to Animo in order to activate them.

Each player will have their own deck of 50-60 cards. Within the deck, there are a few different types of cards: story cards, which grant players a special action during a turn (like taking an Animo out of their discard pile); Sinnies, which can be played on an opponent; Animo, which are the creatures players use to gain points and defeat Sinnies; powers, which are needed to play Animo; and equipment, which can be played on Sinnies or Animo to augment their stats.

During players’ turns, they draw up to 5 cards, or just 1 card if they already have 4 or more in hand. Next, players play power cards into their Power Pool, Animo into their Small Group, story and equipment cards to their respective places, and/or Sinnies onto their opponents’ Sinnies space. Finally, players use their Power Pool to activate Animo and score them.

The scoring phase is how players earn points or defeat Sinnies. Each Animo has a cost to activate and players must use their Power Pool cards to activate Animo. Each card in the Power Pool can only be used once per turn, so players need to consider how to best activate each Animo in their Small Group. Once activated, Animo score the number on the top left of their card. If no Sinnie is present, those points go directly toward the players’ virtue points. If a Sinnie is present, the number on the top left of the Sinnie is deducted from the total Virtue earned, but the Sinnie is defeated so long as the value of the Animo is higher.

Animo ends in 3 ways: someone scores 60 virtue points, someone defeats 6 Sinnies, or only 1 player remains (this is rare, as players can only be eliminated if they are supposed to draw from their deck and cannot do so).

Theologically, Animo’s gameplay pairs well with the theme of pursuing righteousness. Players try to score virtue points, and even when players play Sinnies onto each other, they are revealing sin in their opponents’ lives so their opponent can attack it. Even the Animo have their own style of play based on their kind: Faith Animo often let you discard cards and get them back again,  Hope Animo often let you draw or search you deck, Holy Spirit Animo often let you level up Animo faster, and Love Animo often grant fellowship bonuses and are particularly effective at dealing with Sinnies.

The Bible verses on the cards are also great because they fit the theme, and I found myself subconsciously memorizing them while I was waiting for my turn to play. Even though Animo is a bit simpler than Pokémon, its scripture-infused nature pushed it above Pokémon in my mind.

The artwork and design of the cards is excellent. The naming of the Animo is simply delightful: Quillow, Draylight, Globster, Detestabull, and Salteenie are some of my favorites. The cards feel nice in hand and seem like they will hold up to many shuffles. The optional player mat is just the backside of the rules for Animo’s alternate game mode, Hide It in Your Heart (more on that later). The fact that the publisher included a game mat is great, but it is thin and it does move around when lightly bumped.

Animo cards come in two main packs: you can buy a full deck that includes all the cards you need for one person to play Sharpen Your Sword, Animo’s premier game mode. These main packs are meticulously balanced and include 1 ultra Animo each. Booster packs are also available, which contain cards not found in the base packs.

If you want to be competitive in Animo, you’ll want to pick up some other cards outside the standard pack. The base packs are excellent for playing against each other in a quick-setup game, but the fun of a game like Animo (as with Pokémon or Magic: The Gathering) is in building your own deck to take on your friends. Even if you can’t find anyone else to play with at the moment, fine-tuning your deck can be a good time in itself.

Those are really the best moments in Animo: taking the time to craft your deck and then going against someone else who has done the same. It’s gratifying to see the combos you imagined play out and sometimes even surprising when you discover new combos hitherto unknown. In general, Animo’s cards are pretty well-balanced, so there aren’t a bunch of crazy rules to keep track of when constructing your deck. Well-balanced cards also means that there are thousands of competitive deck combinations.

Animo also includes a shorter, alternate game mode for 2-5 players called Hide It in Your Heart. Everyone is dealt 5 cards, which they arrange in a plus sign, and the goal is to have the most virtue points in your heart at the end of the game. The catch is that you can only look at the middle card at game start, so you have to swap cards from your hand with cards from your heart. This game mode is fine, but in and of itself is only a 5.5/10 to me.

The Red Letter Day expansion packs, coming to Kickstarter September 7th, feature cards based on Jesus’s words. The main draws of these expansion packs are the Percy and Treashell Animo, but there are a few other ones in each deck that I found particularly powerful.

The Percy pack is a Hope and Faith-based deck. It includes 1 holographic Percy, a couple level 1 Percys, but only 1 level 2 Percy. However, that level 2 Percy is very powerful: once activated, you may search your deck for any 2 cards of your choice and immediately place them in your hand. The Percy pack also includes Sowcrow, who allows you to draw extra cards every time you play him.

The Treashell pack is a Love and Holy Spirit-based deck. This includes a holographic Treashell, some level 1 and level 2 Treashells, and 1 level 3 Treashell. The level 3 Treashell provides 2 bonus Love powers if it’s in your Small Group, which can let you activate many Animo in one turn for a huge score. Salteenie is also a fun one in this pack as it allows you to immediately return the active Sinnie to your opponent’s hand once you grow Salteenie from level 1 to level 2.

The Red Letter Day expansion packs add some fun new cards to your arsenal, so if you already like Animo, it’s a worthy pick-up. More Animo means more powers and more fun combinations.

There’s a lot to like in Animo, especially for people who enjoy customizable deck card games like Pokémon or Magic: The Gathering. Anyone can enjoy the card-trading, deck-customizing, and kinesthetic gameplay, and I can see how Animo would be especially enjoyable and accessible to kids, given its shorter playtime.

That said, aside from the initial deck-building, don’t expect a ton of strategy during the gameplay. There are interesting decisions to be pondered, but it never felt as thinky as Race for the Galaxy or Dominion. There’s also the real possibility of not drawing many power cards at the beginning of the game, which leads to Animo just hanging out in your small group, not scoring you points. This can be mitigated with customized decks, but for the base decks this was occasionally a problem. Animo is listed as a 2-4 game, but I’m not a huge fan of playing it with 4 people because it feels like it goes longer than it’s worth. Playing with 3 is fun, but I prefer 2 players for a more strategic experience.

There are not many Bible or scripture-based games that are good games in and of themselves (Settlers of Canaan and Commissioned are ones that come to mind for me). Animo is trying to walk a tightrope as it merges Biblical themes and sound tabletop gameplay, and, at the moment, it’s not as deep as its peers Pokémon or Magic: The Gathering. However, Animo doesn’t need to be as deep as those games. Animo wants to be a fun, family-friendly, customizable card game with Biblical themes about cute Animos comboing for points, and it does that well.

A review copy was provided by Animo Games.

Animo wants to be a fun, family-friendly, customizable card game with Biblical themes about cute Animos comboing for points, and it does that well.