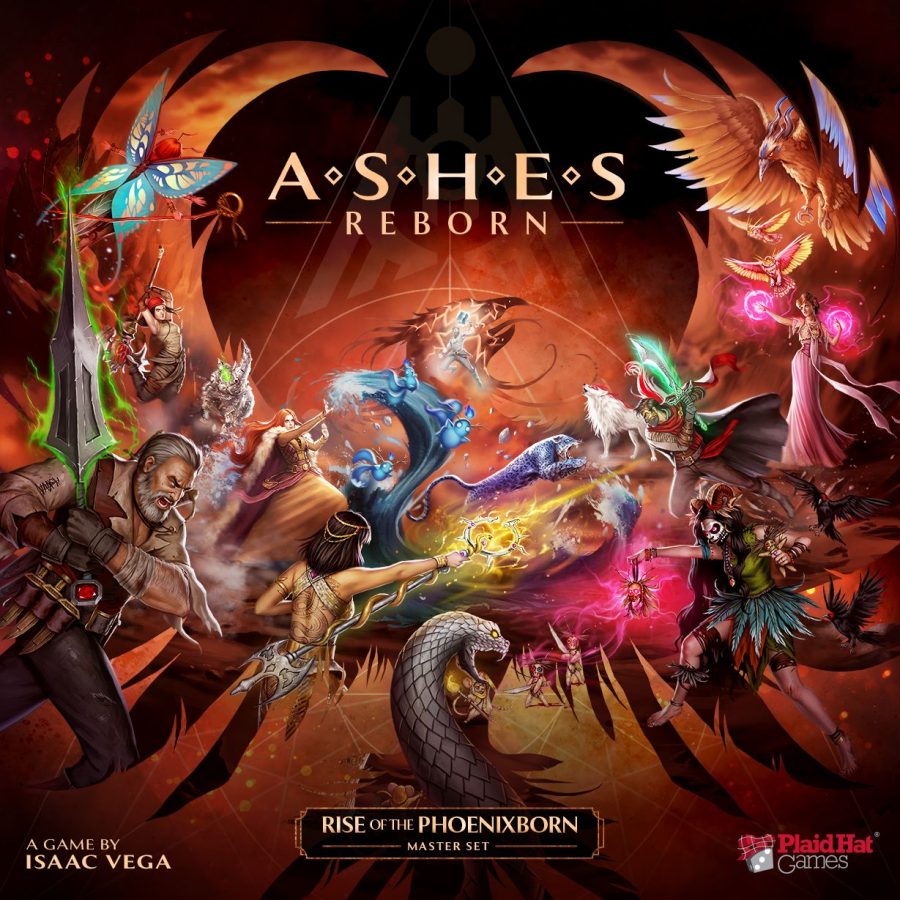 In 2015, Plaid Hat Games launched a two-player mage battle card game. No, not Summoner Wars, their other one, Ashes: Rise of the Phoenixborn. A lot happened in the intervening years: Plaid Hat was sold to Filosifia / Z-Man Games who were then sold to Asmodee, Plaid Hat bought themselves back out to independence, and and Ashes went out of print. Thanks to the ardent fandom of Team Covenant, Ashes is back in print as Ashes Reborn: Rise of the Phoenixborn. The subtle name change indicates not only the return of the game to print, but also a considerable rules update, enough that my rulebook says “Version 1.5” on it. Did Ashes deserve a second shot at life? Let’s find out!

The most important thing to point out about Ashes is that it is in an incredibly crowded genre. Magic: the Gathering set off an entire genre of “card battlers,” such as Summoner Wars, Mage Wars, KeyForge, Epic, and many more. The genre really isn’t any less crowded in 2021 than it was in 2015. To stand out in this crowd, it will take either uniqueness, excellence, or both.

The unique twist of Ashes is a dice system. While Magic: the Gathering had players using specific cards (“Lands”) to fuel other cards, with that general concept often replicated in games like Star Realms or Race for the Galaxy, here players have their own pool of dice that are used to pay card costs. There are four unique pools of dice, and paying for cards is not their only function. They can also do other specific dice actions, allowing you to mess with the other player’s dice, or damage units on the board. It can feel a bit “lucky” at times to be at the mercy of dice rolls, but we’re already playing a card game, so I’d think we’d be complaining about bad beats anyway.

In terms of strategic gameplay, I find the dice system to be interesting and fun. There are a lot of options available on any given turn, and it never feels like the dice “dictate” your move, in part because cards can be discarded to manipulate the dice. My complaint, though, is really in the “production values” side rather than the “game design” side. While the different symbols on the dice look cool, they’re a bit of a headache to learn and differentiate between for your first few games. There’s also no real connection between the very stark colors of the dice and the very black-and-white information areas on the cards, which do little to differentiate themselves from deck to deck. I would have hoped to see some simpler symbols and use of color in the redesign, but it’s something you’ll get acclimated to after a few games.

While the dice system is fun and interesting, I don’t know if I find it particularly unique. Certainly games like Dice Masters and Quarriors! had already integrated dice into the one-vs-one “battle card game” space before Ashes was released the first time. But, while innovation helps, it doesn’t get you very far without an excellent execution. And Ashes Reborn is executed very well.

I only played the original Ashes a few times, so I can’t really compare the 1.5 rules update to the original. But I found the rules very readable and easy to follow, perhaps in part because I am so experienced with this genre. Combat was easy to understand, as were the various phases of play. This seems like I’m just saying “hey, great, it worked,” but honestly, that cannot be understated. In the Kickstarter era where so many games are half-finished and poorly playtested, it is definitely worth noting that here is a good game that has also been seriously refined so that the rules are airtight. Nothing more easily ruins a play session than getting out your phone to dig through the internet for a rule that should have been clearly stated in the rulebook. Ashes Reborn has avoided this problem for me so far.

In addition, I did find the different decks interesting and unique, although their parallels to other games are somewhat obvious, particularly with such a common theme. This genre is specific enough that design space can at times feel constrained, and by my understanding, these six decks are the same that launched with the game in 2015, so it may be surprising that they didn’t feel incredibly innovative. It also makes sense that you would want to make sure players can get going easily, and then save crazy stuff for expansions.

So, let me end by saying Ashes Reborn feels fresh, but not in the typical manner. It doesn’t feel innovative or unique, but it feels fresh in the sense that everything plays out like these games should; it is a fun romp with more time spent battling and less time spent looking up rules. For those that are looking for a new expandable card game to dig into with a friend, Ashes provides a strong experience.

Thank you to Plaid Hat Games for providing a review copy of Ashes Reborn: Rise of the Phoenixborn.

What Ashes lacks in innovation, it makes up for in execution.