Review: Bardagi: The Claim for Gold 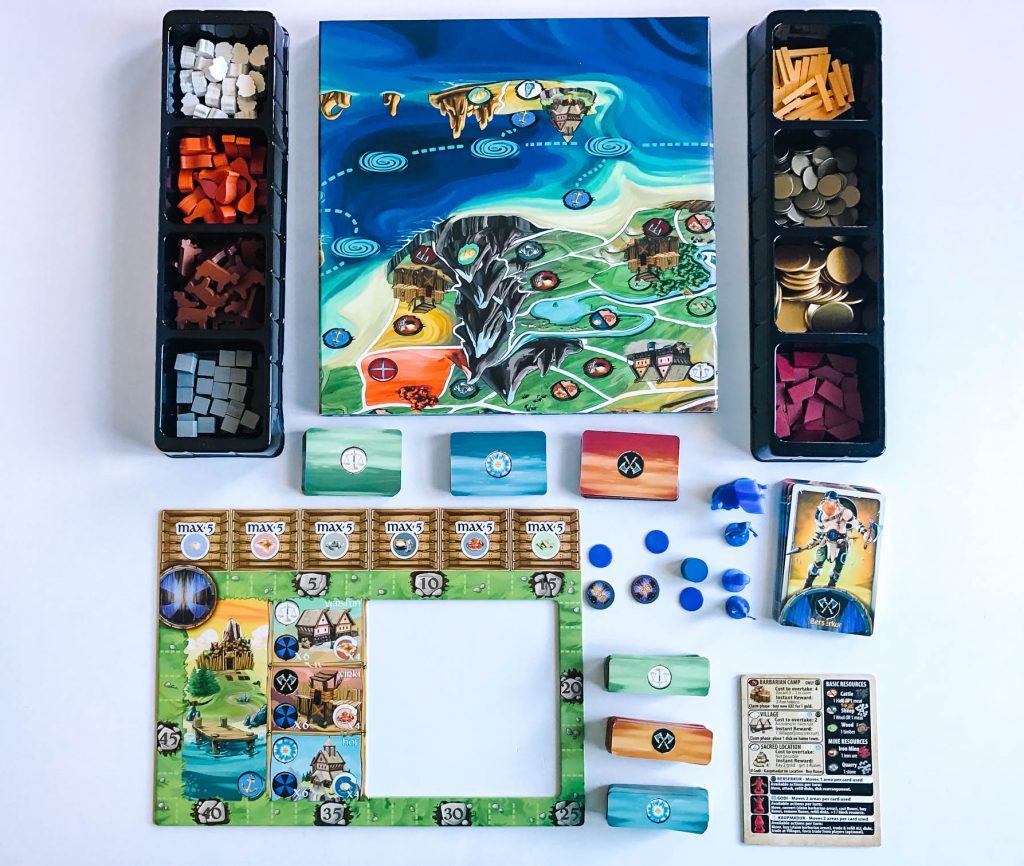 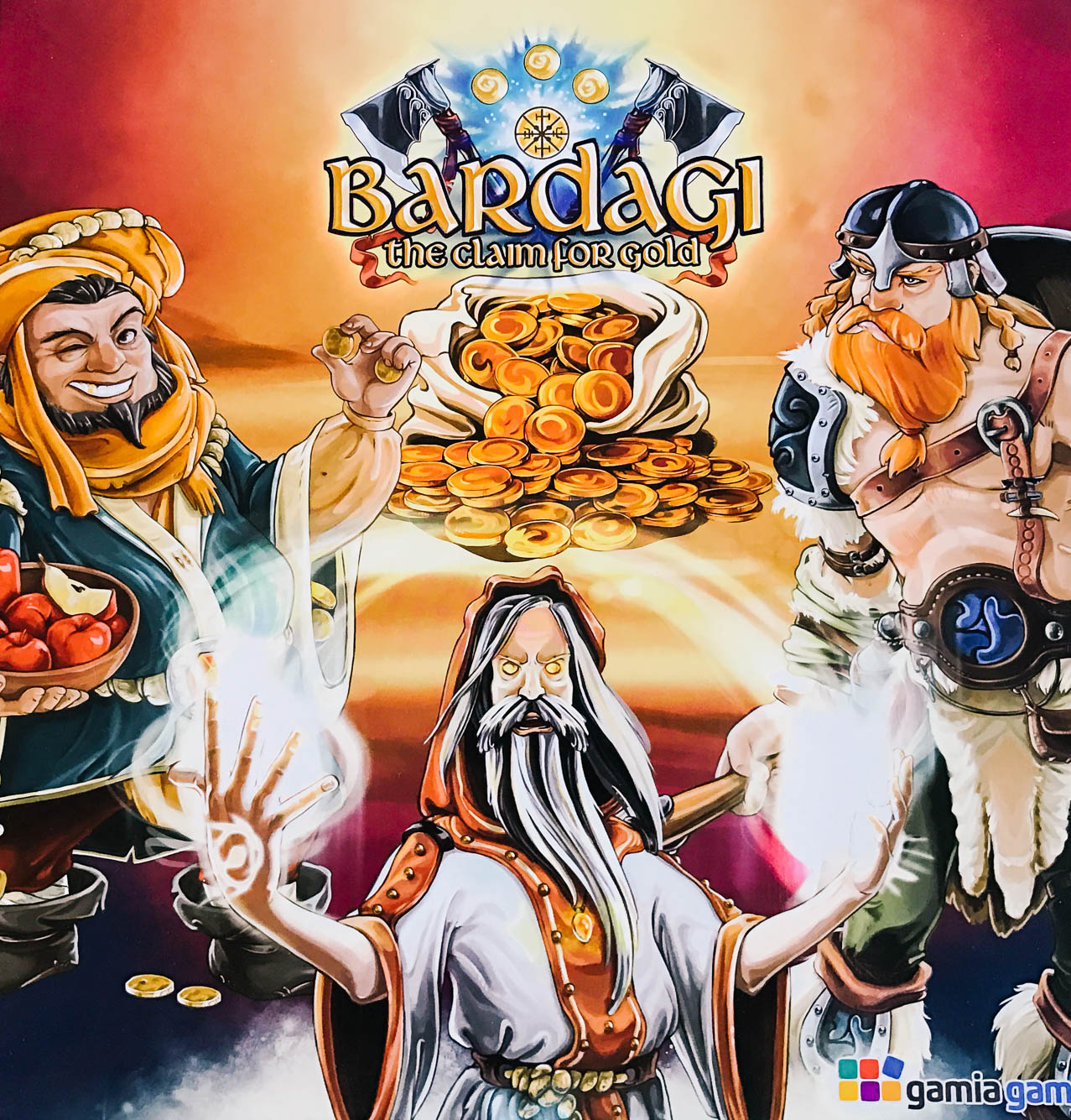 Gamia Games brings us Bardagi: The Claim for Gold, from designer Svavar Björgvinsson. I’d be remiss to mention artist Valentina Scamardì. Scamardì also worked on Master: Become a Hero, also from Gamia Games. The company is also at work on one other title: Ancient Aliens: Creators of Civilization.

Bardagi: The Claim for Gold was successfully funded on Kickstarter within 20 hours of launch in early 2016. At the time of this writing, Bardagi is currently shipping to backers. Svavar also designed Ancient Aliens, along with smaller titles like: Rally, Vikings, and the Xmas Game. 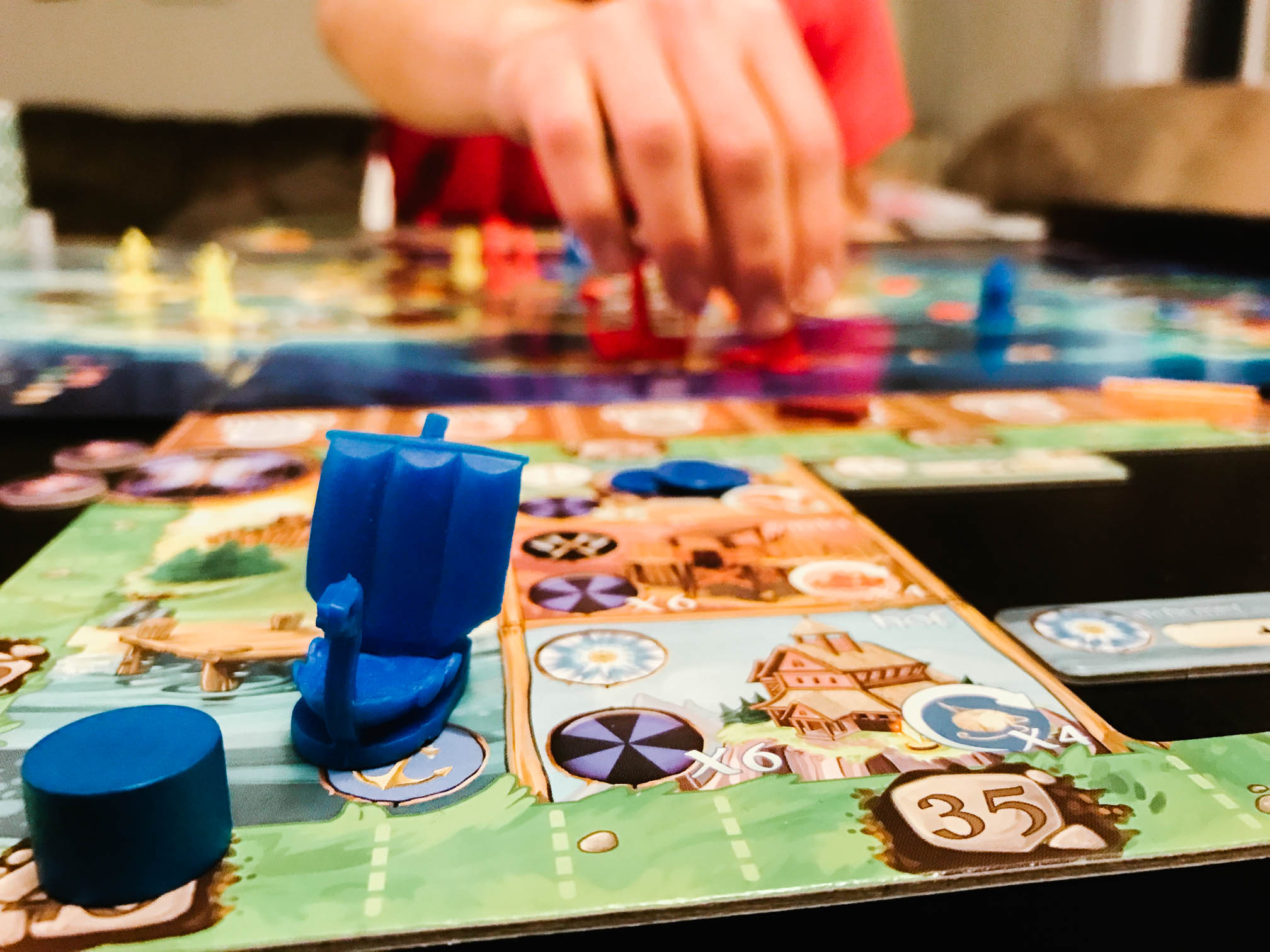 Combat and bribery abound in Bardagi, although entirely thematically employed. The Godi character (priest) does convert barbarians to an unknown (supposedly Nordic) religion, and casts runes on areas, granting or blocking special powers. 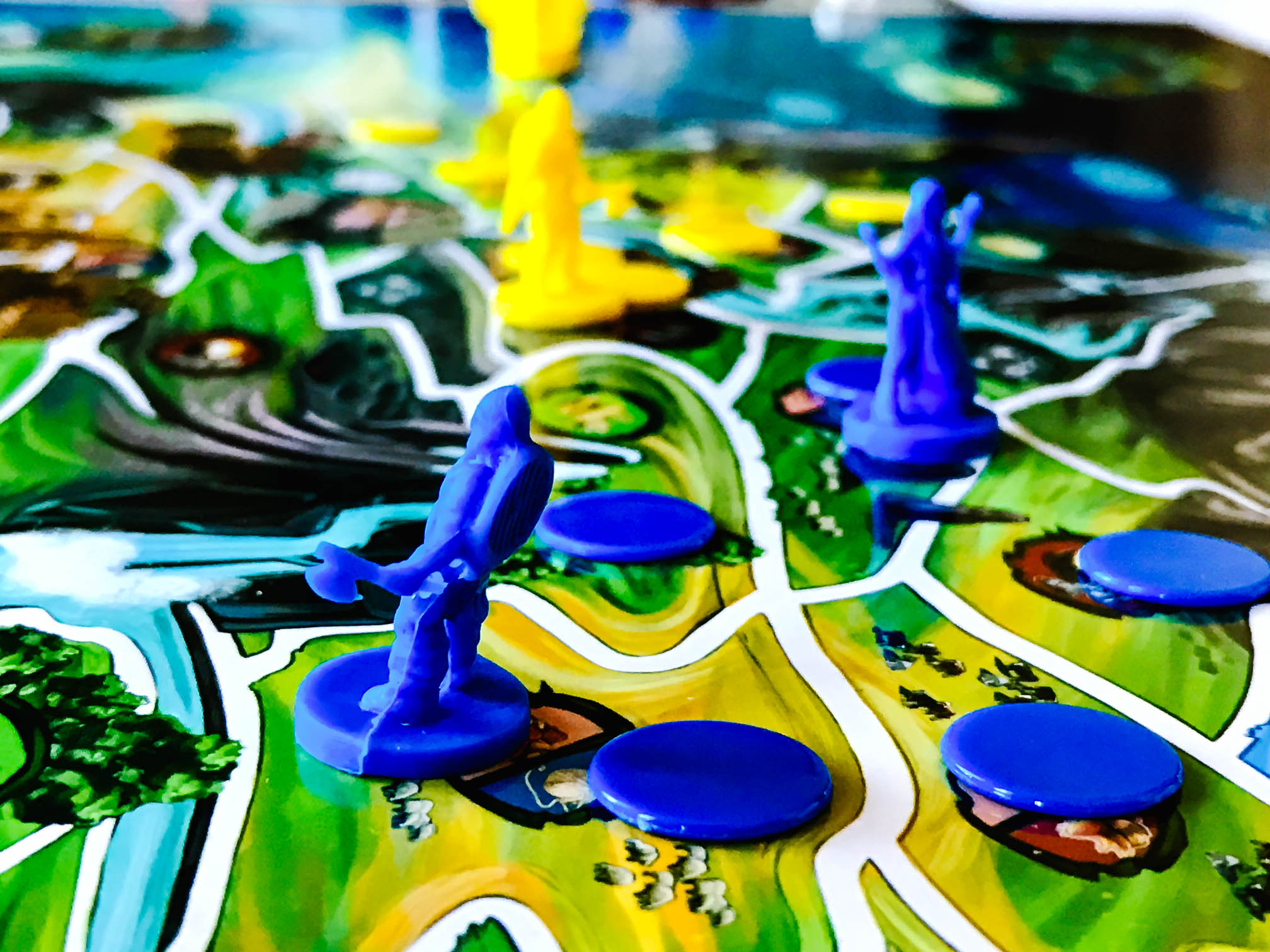 Calling all viking tribesmen! The High Jarl has released an edict to all worthy axe-bearers to take up tools and weapons. The task: conquer lands from the heathen barbarians, command resources, and build a tribal empire. Aye, to please the gods might be a virtuous ploy, but your religious conversions won’t do naught but bring more to the fold for the goal of subjugation of the terra! 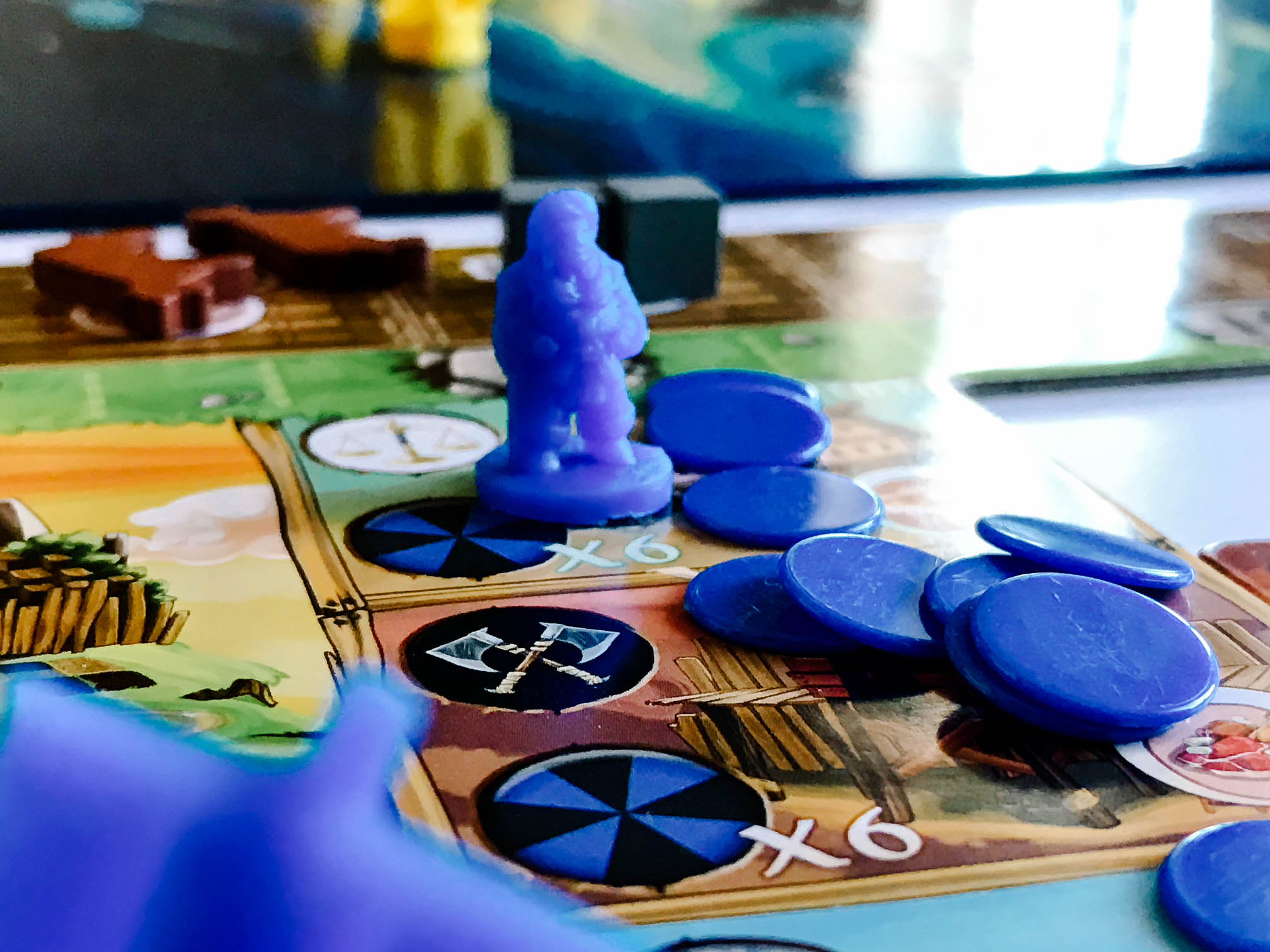 This is home base. The Kaupmadur stands tall next to his bag of disc money.

Axes! Ore! Magic runes! Leather! Chicken? Wool? What are we going to use wool for?

These are tools of the trade in Bardagi. Players select a color/tribe and set out on a journey for mad viking conquest. Of course, aside from conquering areas with your Berserker, you can also convert barbarians with the magic of your Godi, or even bribe them with the gold from your Kaupmadur trader. Players also have a Knerrir unit (boat) that allows for movement over the treacherous seas.

Each player begins home base with little discs that represent many different game mechanics (i.e. strength of troops, gold to trade, magic power, area domination). Players use cards to play out turns, with each one activating one of their four units. Each unit has a different method of taking over territory, along with special bonuses that can only be activated at villages, or barbarian encampment, for example. 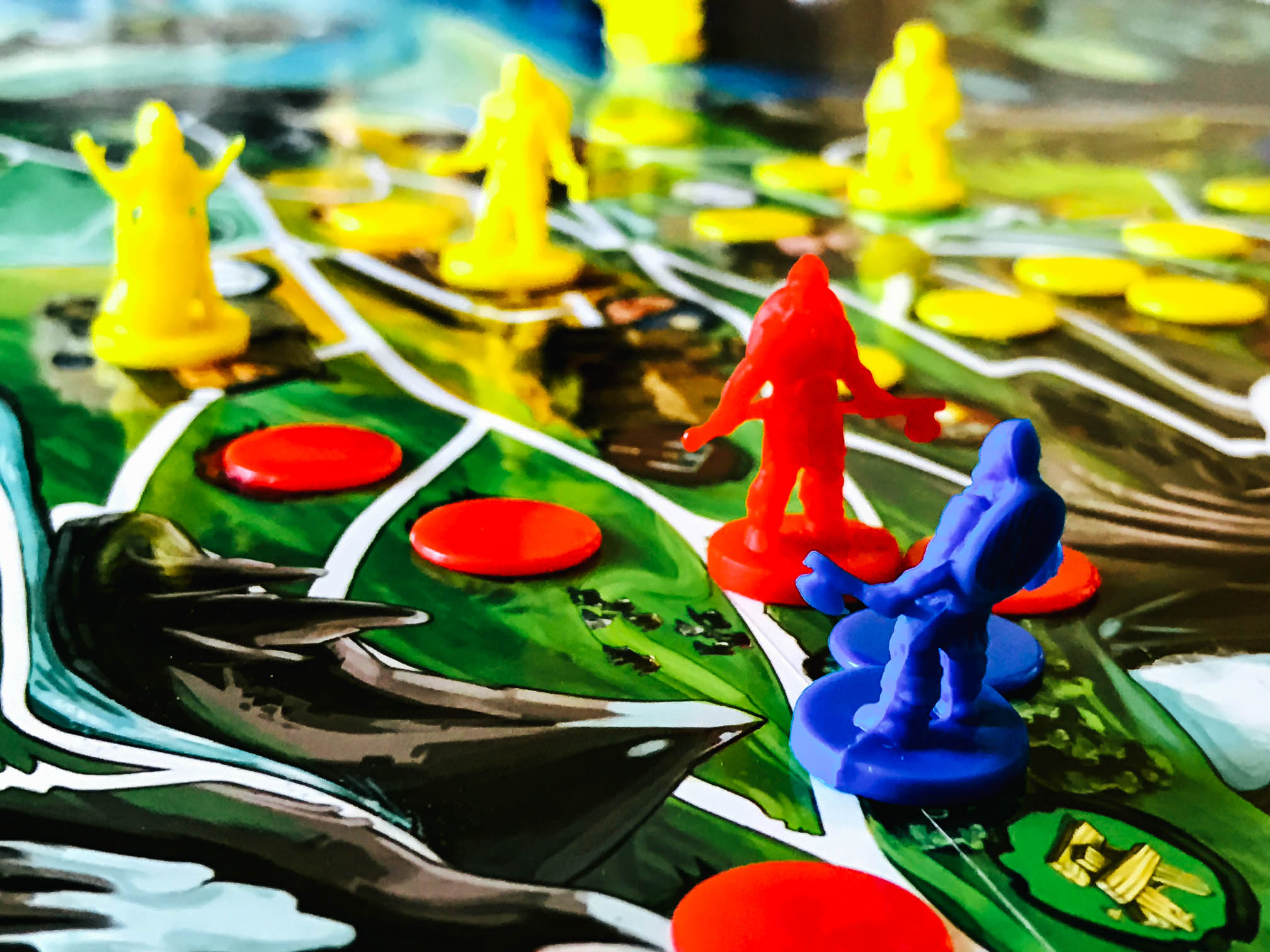 Here is a healthy example of two berserkers about to angrily engage in combat. Lots of discs too.

Players will gain resources and glory (victory points) from each area they control at the end of the round. These resources are used to construct building upgrades for their units. Upgrades grant glory, but also increase the discs they can hold, strengthen units, or give extra gold or glory for controlling specific resources. Players can also receive and play magic runes that can double resource production, block a resource, or even increase movement speed.

The game ends either on a decided real-time limit, or once a number of rounds have been played (dependent on player count). Players tally points from their gold, resource trade-ins, and receive extra points for controlling most land or amassing most gold. The player with the most glory at the end of the game is the winner.

Author’s Note: I should be forthright: as you can tell from my photos, my version of the game bears some, not all Kickstarter exclusive components. My review will cover the components I own, but I won’t go into the components I don’t have. 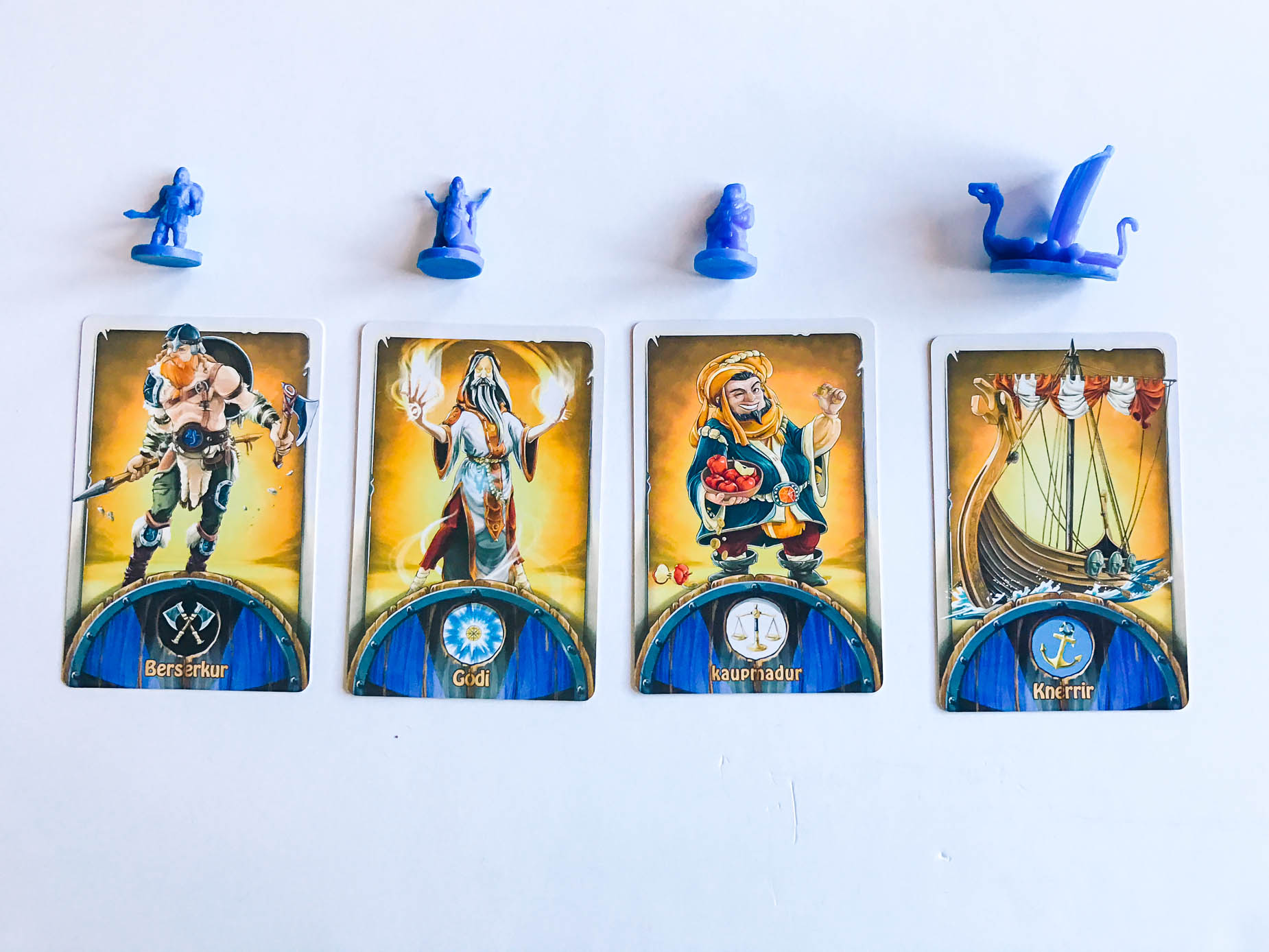 Each card with their respective unit.

Bardagi is excellent to look at. The game is bathed in beautiful, vibrant colors. The board is outstandingly detailed, depicting mountainous vistas, encampment, deserted islands, and highly-contested river bridges. The player cards and home base tableaus are also intricate and worth admiring for more than a few minutes. Each unit illustration is fascinating and has a unique flavor. For example, the Kaupmadur isn’t just a bearded local viking trader. He carries a sack of gold, wears eccentric clothing, and grins uneasily.

The component quality varies from mediocre to marvelous. The unit miniatures are muddled and bent out of shape. I’m glad to have them, but I’m spoiled by Star Wars: Imperial Assault, so I’m relatively uninterested. These player discs hearken to a younger time in my life when dropping half-opaque discs on a Bingo mat was acceptable for entertainment. While it’s difficult to teach, I’m okay with utilizing the provided discs for multiple purposes. This reminds me of cards doubling as buildings and gold in San Juan. 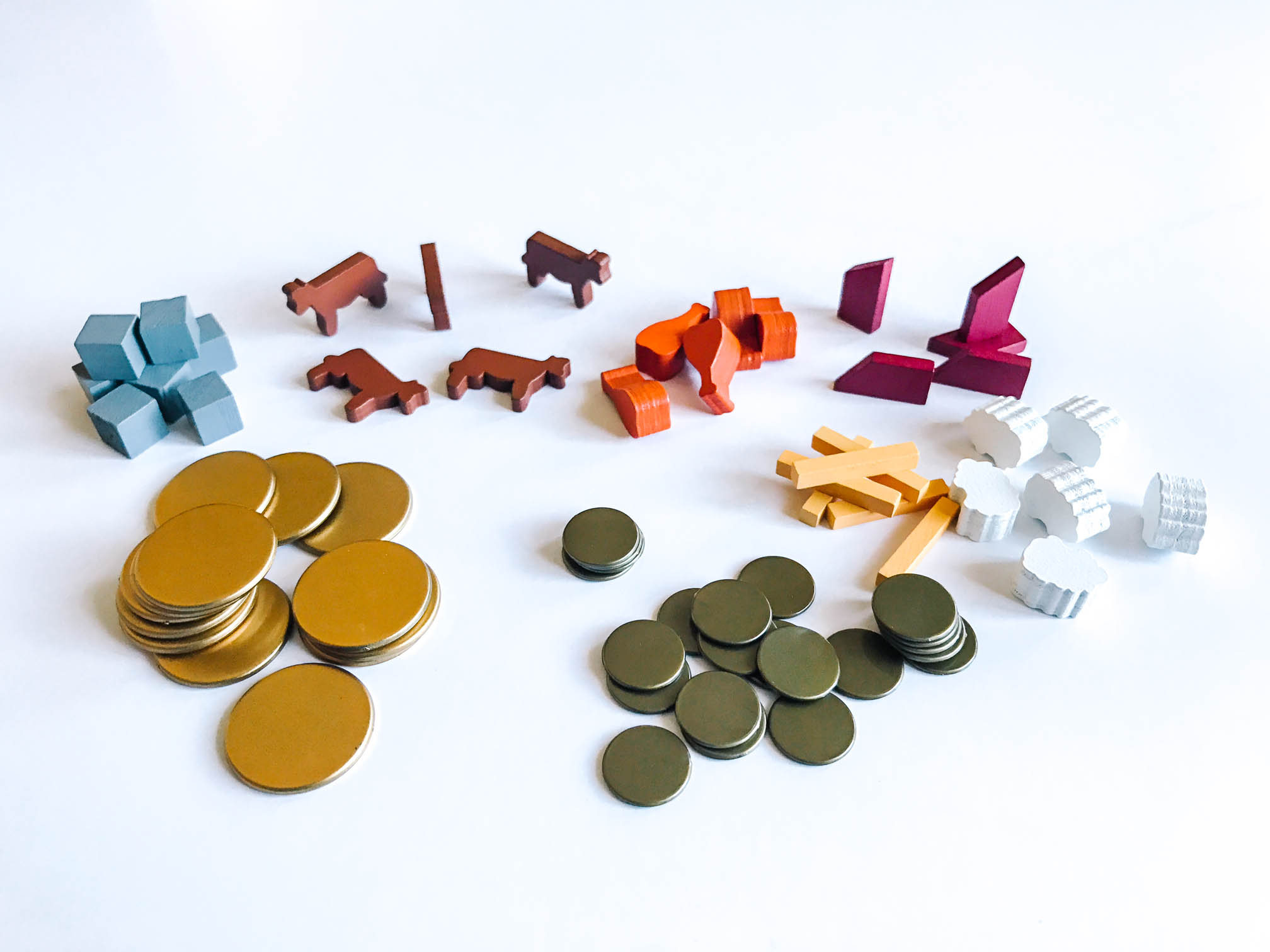 Those things said, I adore the upgraded resource components. I can jingle faux-metal coins in my hand, simulating my royal wealth. I can stack cattle and sheep meeples just because. The fat stone blocks pair nicely with the slant on the red ore slabs. The mysterious artwork on the rune chits is eye-catching, even if I need to refer to the on-board legend. The game also ships with trays to hold components, which is lovely.

Bardagi straddles the line of civ-building and area control, but doesn’t really fall into either category. Upgrading buildings provides new skills, but it doesn’t feel like a tech tree. Controlling land is integral to winning, but you aren’t really bringing big armies into combat like Kemet or Blood Rage. If anything, it plays as an adventure game, like Runebound. Sure, you aren’t worried about quests, but you definitely have a reason to travel and explore the lands, gaining plunder for your efforts.

Bardagi is clearly a euro at heart. You always end your turn wishing you could have completed just one or two more actions. This feels entirely balanced, because no matter your perceived efficiency, everyone else finished their turn feeling the same. This does pick up a tad in later rounds, as players gain two additional actions a turn. I suppose thematically, this simulates the growth of your land and population, allowing for more production and actions. 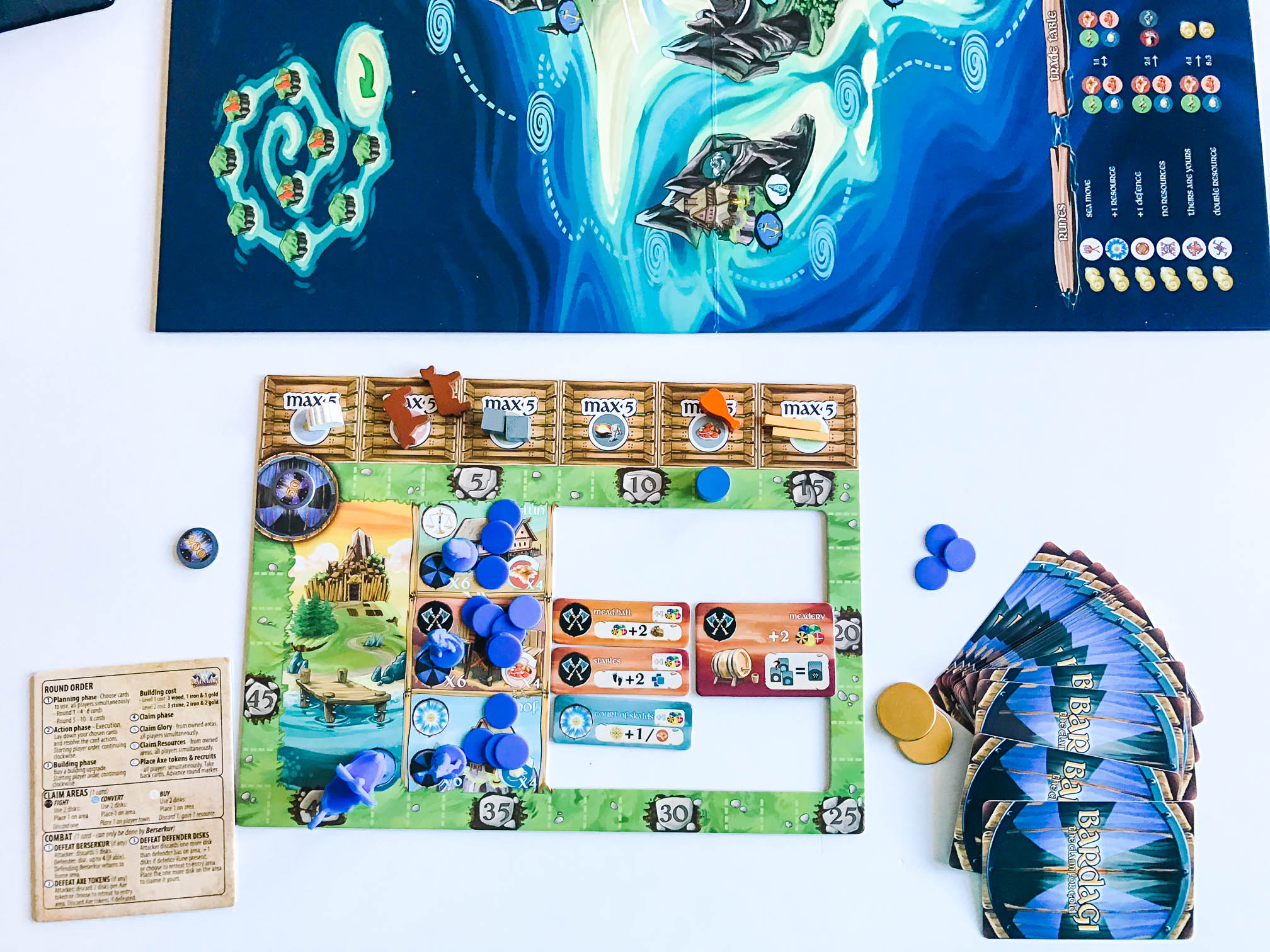 Here is what your homebase looks like as you progress through the game.

What I find interesting is despite a few hot zones early in the game, players keep to themselves. There isn’t a need to fight for land because the bloodshed is too costly, and neither player benefits from the cost. Depending on player count, somewhere around the 6th or 7th round, the game flips a switch. Chaos and war erupt among the tribes, with players viciously planning turns, AP setting in furiously.

With two sides to the game board, players have to decide which expansion is most valuable to them. Quickly claiming the outer regions of your borders will be important to halting late-game expansion from your enemies. This is going to waste lots of turns, and hurt your resource production. Maybe you want to consider taking a boat out and claiming islands? A player must decide which islands to bolster with units, and how many actions they can spend before they need to return home. I didn’t mention earlier, but once a unit runs out of discs, they must return to home base and pay a sum of wool, meat, or leather to refill their disc count. This back-and-forth limits your reach, and forces you to return home and report back to the village after long voyages for glory.

Of course, there are plenty of other benefits to units and board spaces. Players will want to capture gold to boost glory per turn. By capturing a village, you receive a free recruit every turn to add to a unit of your choice. By overtaking a barbarian encampment, you can drop axes onto key areas to boost its defense by two points. By visiting holy rune sites, you can collect additional runes for casting spells on your foes. 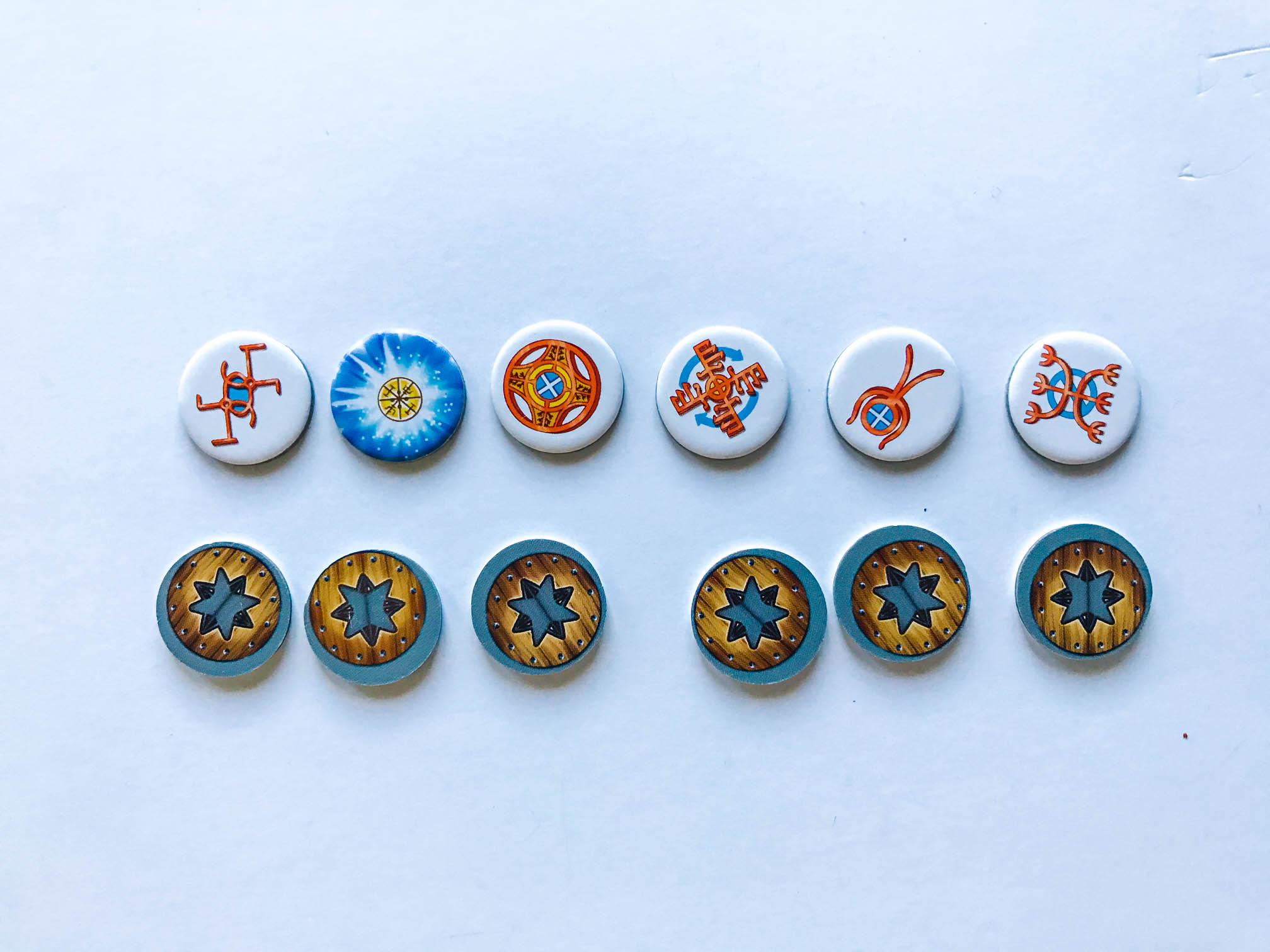 Each rune provides a different method to make people hurt… Or feel better about their life outlook.

Bardagi appeals to a very specific audience. These people like games that seem heavy upfront, but devolve into simple gameplay after a few games. The complexity comes from other players. You can get boxed into your home base pretty early in the game, but maybe you’d rather push into enemy territory and make it difficult for them to expand. Aside from random building tile and rune drawing, Bardagi is completely devoid of luck. Player skill and optimization are king. Gameplay is deterministic.

It feels like what Small World could be: fun. Here, the complexity of units and becoming most efficient with your order of actions is critical to success. Of course, your carefully laid plans could be entirely ruined by smart counterplay of your opponents.

Each turn bears so many things to think about. Where do you leave your Godi for extra resource gain? Why did you need your Kaupmadur to end 2 spaces from that village instead of 3? Did you need to refill your Berserker on the last action, or was it fine to use his last two discs on the ore deposit? Opening moves seem apparent, but I can definitely imagine optimal opening plays developing from an experienced group. 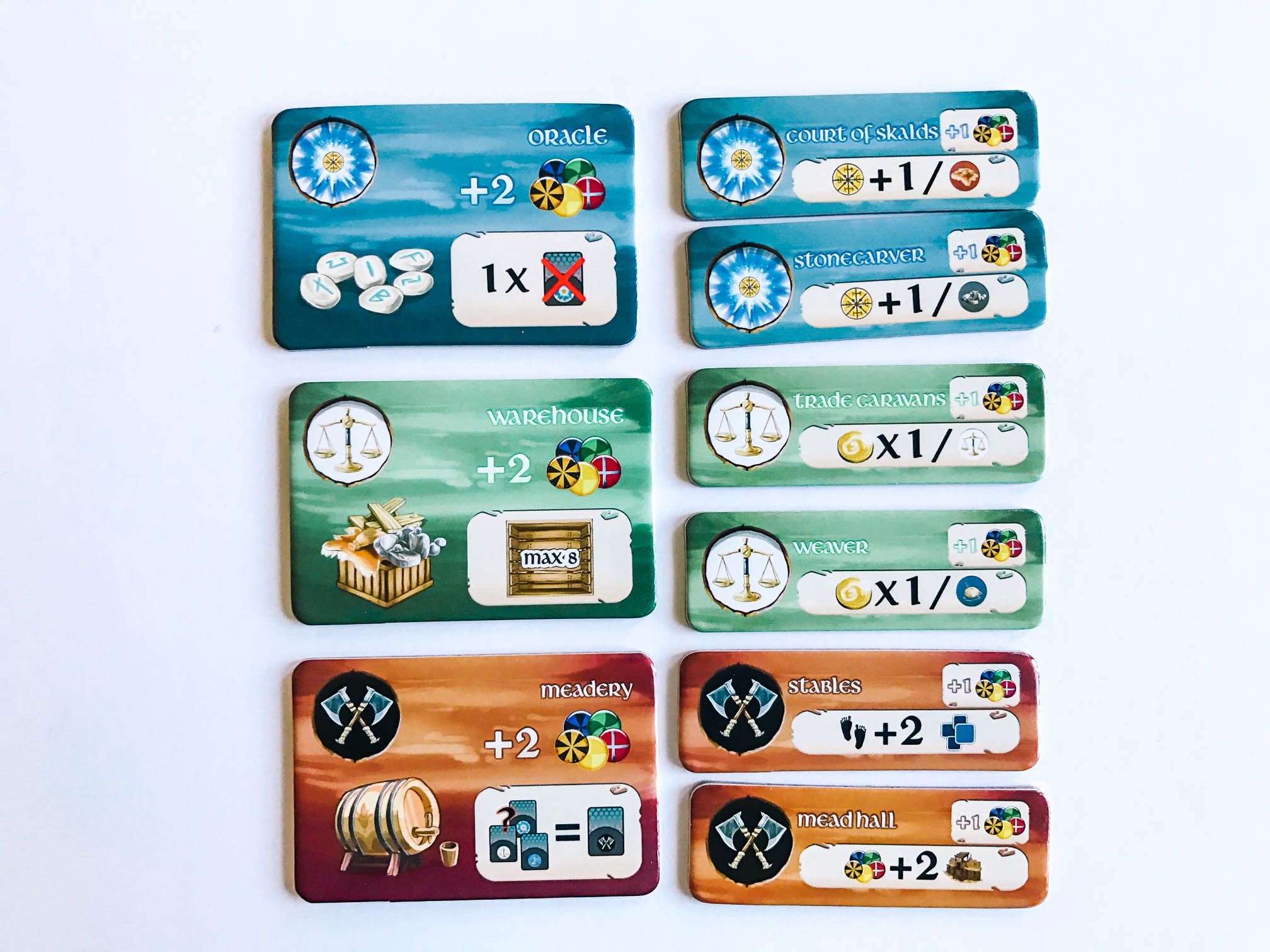 While I have received some clarification from Svavar on rules, I did find the rulebook overly comprehensive and confusing. We had to take some time figuring out how to move onto and around areas with rivers or harbors.

I’m not sure if it’s a bad thing about the game, but strategy is not at all apparent. There are many routes to victory and glory. You will gain from controlling land, and from controlling gold, but you also have to balance your resources and upgrades. There is a lot to think on, but figuring out how and why you need to place all of your discs is a bear.

Finally, I think the game is fun, but long. Even though in one game we chugged along nicely at 2 players, I felt it stretched for no reason. I think you can get the same amount of fun from 5-6 rounds, but the game doesn’t really develop fully until after an hour in. Once you approach 7-8 rounds, things become cutthroat and exciting, but also drawn out. When you realize it’s time to overtake enemy lands, analysis paralysis kicks in hard. This isn’t a bad thing about the game, but by the time it gets really interesting, I’m mentally checked out, because I’ve already been scheming and planning my inefficient turns up to this point.

Overall, I think Bardagi: The Claim for Gold works. The components are wonderful, the game has lots of variability baked in, and it offers plenty of room to try wacky strategies and destroy your enemies. It might be worth watching a gameplay video to see if this fits your fancy, however.

I’d like to write more but… I must rally, for I need to board the Knerrir forward to glory! Toodles.

A copy of Bardagi: The Claim for Gold was provided by Gamia Games for a fair and honest review. 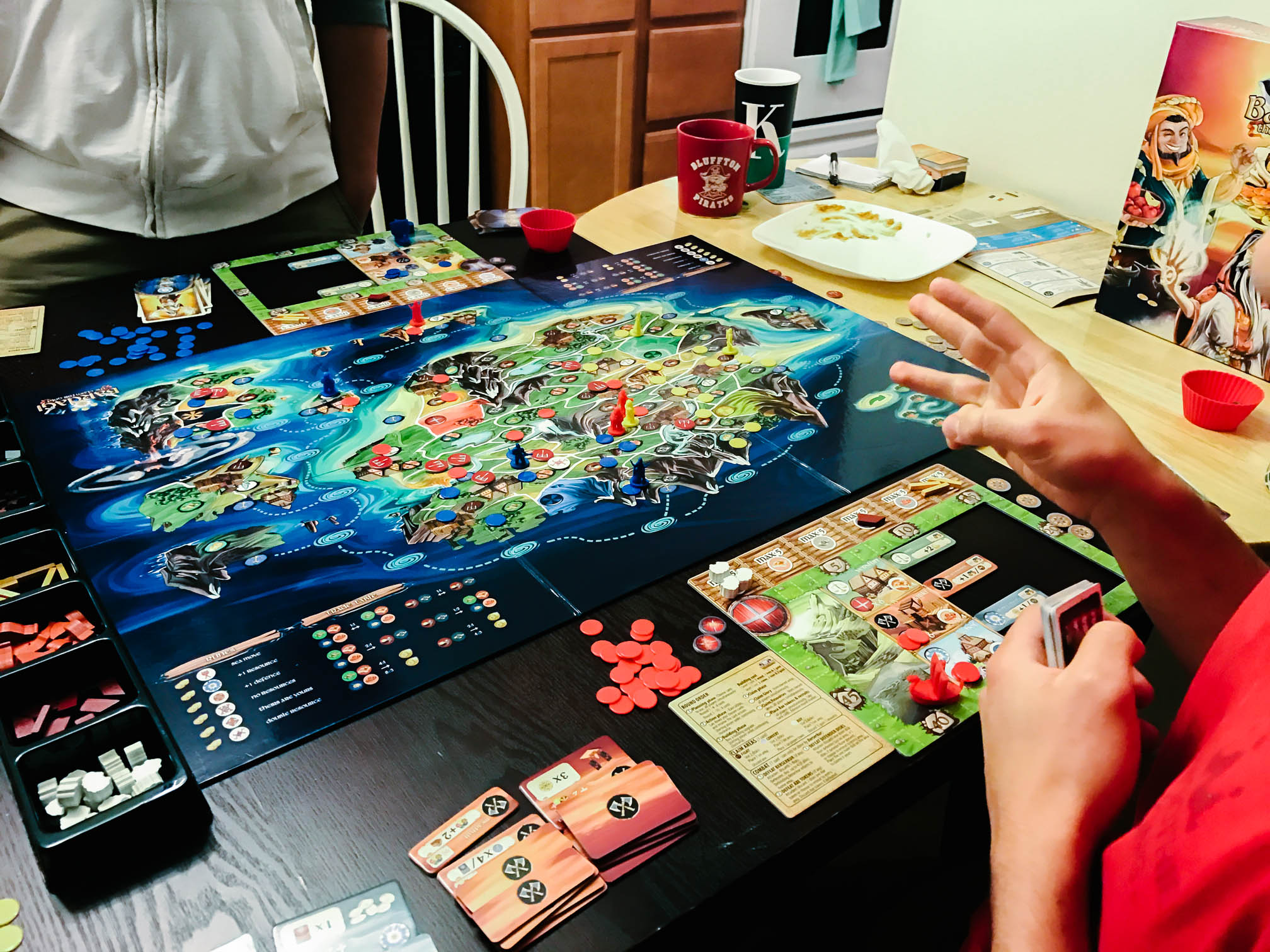 Bardagi is beautiful and adds a fun take on area control and resource management. It bears a steep learning curve, but levels out once you understand it, making it worthwhile for a group that favors complex player interaction and board control.