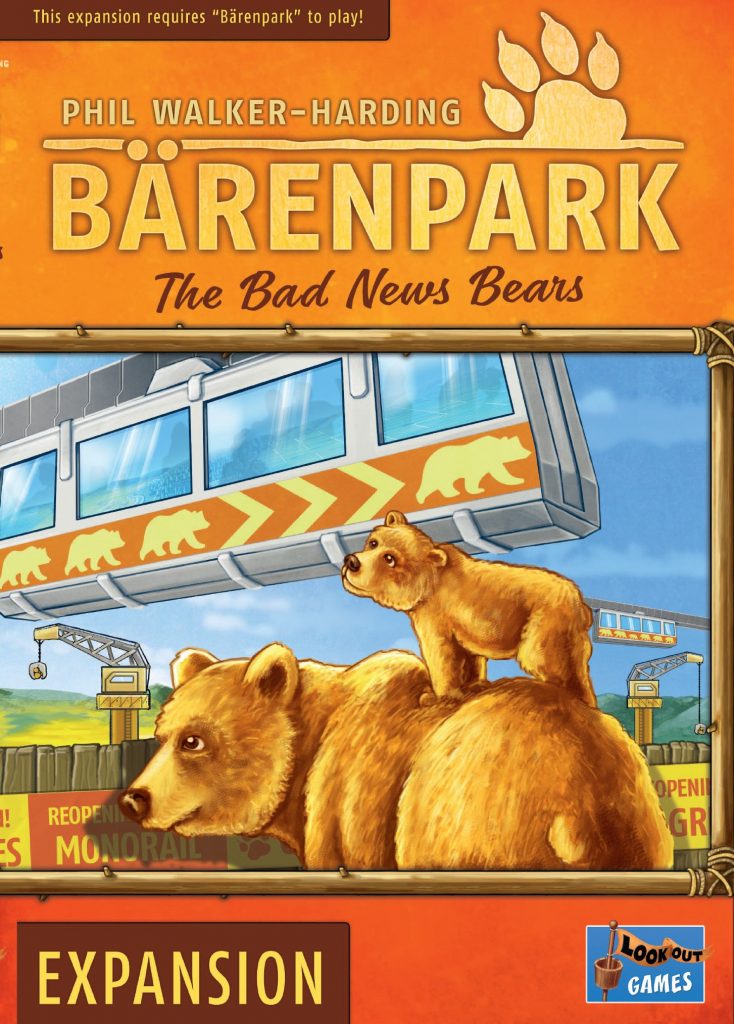 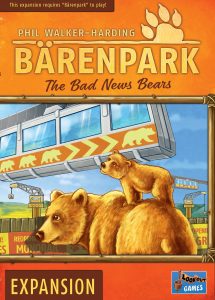 For decades, board games have included modular tiles as part of gameplay, tracing at least back to 1999’s Tikal. In 2001, the award-winning game Carcassonne showed that you could make placing tiles the entire game, and Bärenpark is definitely a direct descendant of that school of thought. Released in 2017, Bärenpark has proved popular enough to warrant an expansion, the humorously titled The Bad News Bears. But is more stuff what a simple game like Bärenpark needs? Let’s find out!

The original Bärenpark is about building a park full of bears. The tiles are cartoony and cutesy, with a little bit of humor (for example, one of standard tiles is a “Toilet” tile, because, well, your park needs those). The Bad News Bears is more of the same. The only objection to this game that I can find is if you think it is inappropriate to place animals in parks or zoos.

The original base game.

First, a brief introduction to Bärenpark. The game uses an ingenious system where polyomino tiles are placed on square landscape tiles (“Park Areas”), covering icons that then provide more polyominos in future turns. So, each turn literally involves playing a tile and collecting some new ones. Despite the simplicity, there are a lot of tough decisions baked into the weird shapes of the tiles. Additionally, this game has my favorite way to do scoring in any board game: you literally just add up the numbers on your board, and that’s it. It is a fast-playing, fun, beautiful game, and my favorite family game in the tile-laying genre. Not to be too controversial, but I find it better than Carcassonne, Kingdomino, or Azul, and think it a crime that it was snubbed for the Spiel des Jahres (German Game of the Year).

A big part of what makes Bärenpark work so well is its tight design. Every part of the rules is carefully and intricately woven together, much like the pieces themselves, so that the game itself plays as smoothly as possible. Additionally, one of the main goals is to completely fill the spaces on each of your Park Areas, and managing to cover everything up and get rid of any empty space is so satisfying, much like pulling off a Tetris in, you know, Tetris. I was a bit worried that adding more stuff to the game would break the delicate balance.

This expansion includes a few additional basic pieces, two new modules, as well as new Achievements for the module from the base game (Achievements are an optional variant). The short version is that two out of three ain’t bad.

The first module is called Grizzlies. A slate of new enclosure tiles (guess what kind of bear is in them?) is included, and the tiles are gigantic. Some of them take up half a tile by themselves, in strange ways to boot, but they are worth a lot of points and can help end the game quickly in your favor. To gain a Grizzly tile, you have to discard a standard bear enclosure as well as a “green area” (toilets, vending stalls, etc.) , and you can do this at the start or end of your turn. Playing with the Grizzlies also means adding a fifth Park Area for each player before ending the game, but Bärenpark is such a fast game that the additional time is negligible, and it’s always fun to be able to do just a little bit more in your park.

This module stays true to the “spirit” of Bärenpark. The rules are quite simple, but the complexity is in the crazy shapes of the tile themselves. Deciding when to grab a Grizzly tile — at the start of your turn, at the end of your turn, or at all — is the difficult decision. I don’t feel any need to include these while teaching someone Bärenpark, but they are quite easily added to a second game when you play back-to-back games, as we usually do. My only complaint about the Grizzlies is that it’s easy to just forget the option is there once you add it in, since nothing on the Park Areas prompts you to consider them, unlike all of the other tiles. Well, also, they take up a ton of table space. However, I’m almost always going to include these when playing with veterans. 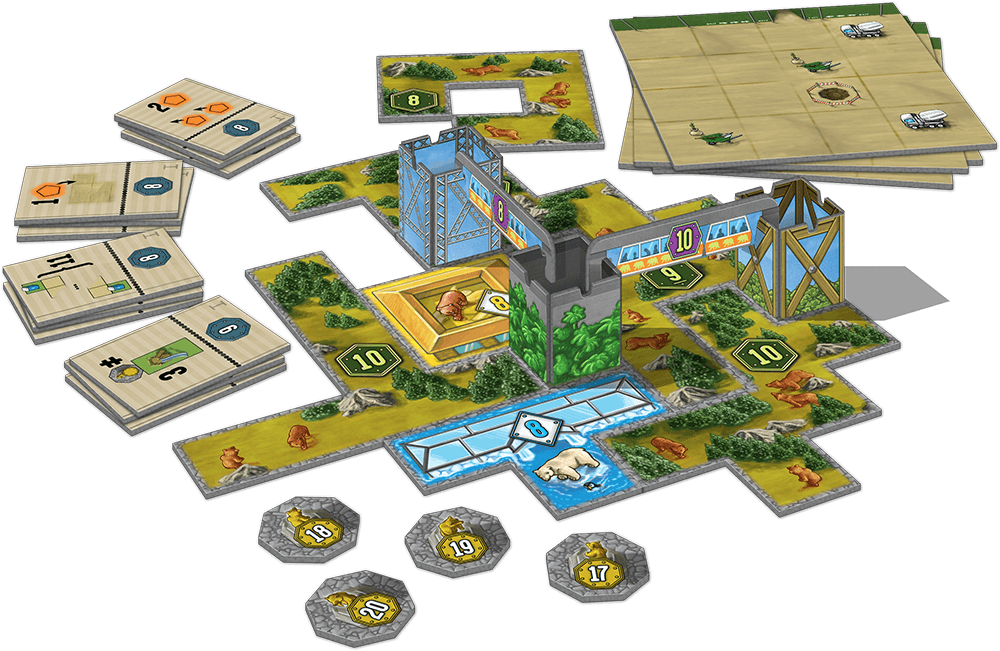 The second module is the Monorails. In my mind, these go against the “spirit” of Bärenpark in just about every way. Both physically and mentally, they are fiddly. You have to “roll” the towers together and then hang the rails from the towers. It’s an obnoxious pain for fat-fingered people like myself. Furthermore, it makes the board look uglier overall. Admiring each other’s parks at the end of the game is a big part of Bärenpark’s aesthetic appeal, and the garish monorails ruin that by covering up a lot of what you’re doing on the ground level. I also seem to knock them over fairly often.

On top of the physical problems with the pieces, the rules for monorails are unnecessarily complex. With simple games like Bärenpark, I just want to get going and play intuitively without worrying about rules. So many tile games have a list of exceptions about where things can be placed and what’s allowed and so on, and Bärenpark has very few. In the entire original ruleset, there are four stipulations in the rulebook about things you cannot do with a tile, and they’re all fairly intuitive. There are 3 stipulations on the monorails alone, and I would have only naturally come up with one of them. And much like the Grizzlies, you have to remember to even consider the option when placing Green Areas in your park. For a game this sleek and smooth, that’s too much clutter, both mentally and physically.

The third “module” of this expansion is the new Achievements. The original game includes an optional variant where Achievements are placed beside the board and players can get bonus points for doing certain things, and doing it before other players gives a higher bonus. I don’t always use this variant but it fits with Bärenpark‘s design philosophy: it’s a simple, intuitive add-on that can add a lot of strategic complexity without a lot of rules.

Often when a game has a variable piece and expansions provide more of that piece, the designer and developers do something that drives me nuts. They will include new pieces that reference the other new pieces, meaning that you can’t really “pick and choose” what to include. For example, for The Bad News Bears, they could have included Achievements that referenced Grizzlies and Monorails. However, they did not! And to me, that is a much better design. The included Achievements can be used with the base game alone, or with either of the other two Modules. The new Achievements are designed quite cleverly, so that while they don’t reference Grizzlies or Monorails, the inclusion of those expansions can change the valuation of the Achievements naturally. Again, it’s that wonderful philosophy where the complexity is baked in naturally to the simple rules.

So, two of the three components of the expansion are excellent, and one I have no intention of using again. Is that worth $29.99? That’s a really tough sell, when the base game itself is only $41.99. I think it depends on how much you play Bärenpark. If you’ve only played the game a handful of times, then you probably haven’t seen enough of it yet, anyway, and can hold off. If you’re like me and this is one of your go-to games for a quick filler at game night, then the expansion is absolutely worth it. While I’d be happier with just Grizzlies and Achievements together at half the price, I think they are good enough that once the initial sting of the price fades from memory, you’ll be happily playing with these modules for a good long while. And who knows, maybe you will be a bigger fan of the Monorails than I am.

Lastly, I should mention that this expansion also allows for players to combine all of the content, and more flexibility is always better. (And for those curious, it all should fit fine into the base game’s box.) For me, I’ll always be including the new Achievements as options when I play with Achievements, and I’ll be including Grizzlies as often as possible. As for the Monorails, I’ll probably let my kids build something out of them…

Thank you to Asmodee North America for providing a review copy of Bärenpark: The Bad News Bears.

The good outweighs the bad here, and one of the best tile-laying games of all time gets even better.