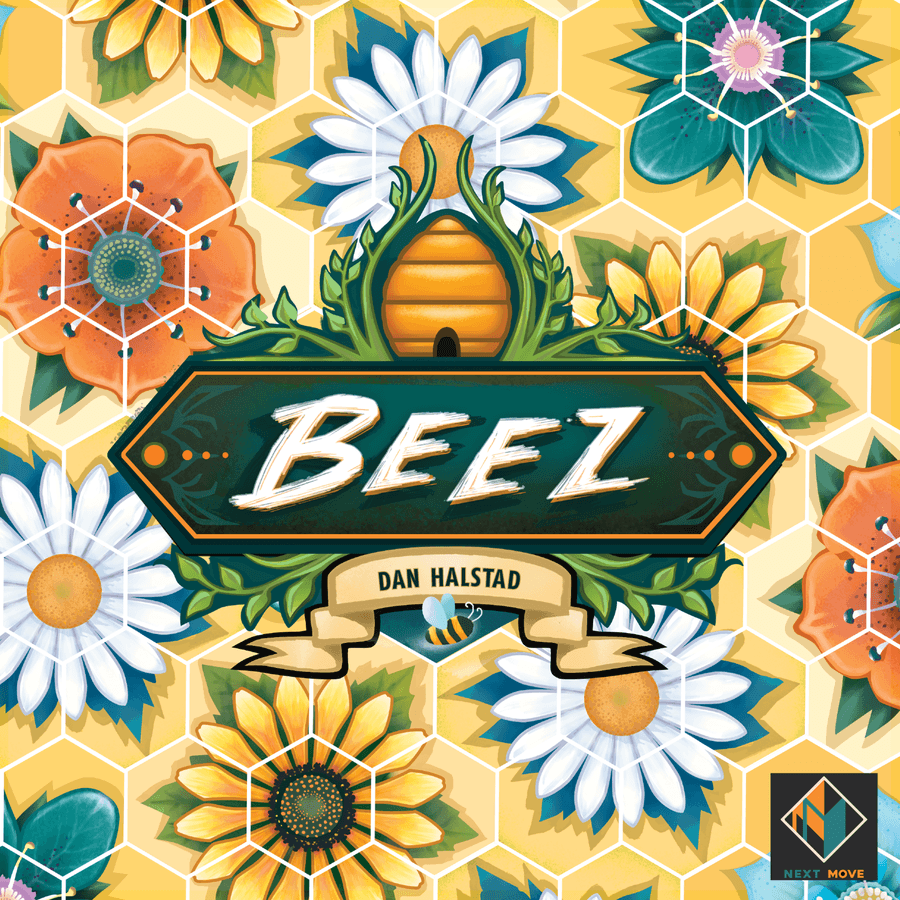 Beez is the latest release from Next Move Games, publisher of the uber-popular Azul series. This game puts players in the role of bees (beez?) flying around a field collecting nectar. Different flowers yield different types of it, and players try to collect sets of nectar to fulfill objectives. Like all of Next Move’s offerings, Beez is highly accessible and fun.

Next Move Games is one of my favorite publishers, so understandably, Beez was an insta-buy for me. In this game, players buzz around a field of flowers collecting nectar. Their goal is to complete objectives and score the most points.

The game is played on a grid of tiles, each consisting of 7 hexes and bearing either a flower or a leaf. All flower tiles have nectar tokens on them, which players will collect throughout the game. Each player has a bee mover piece, which begins on the center tile. 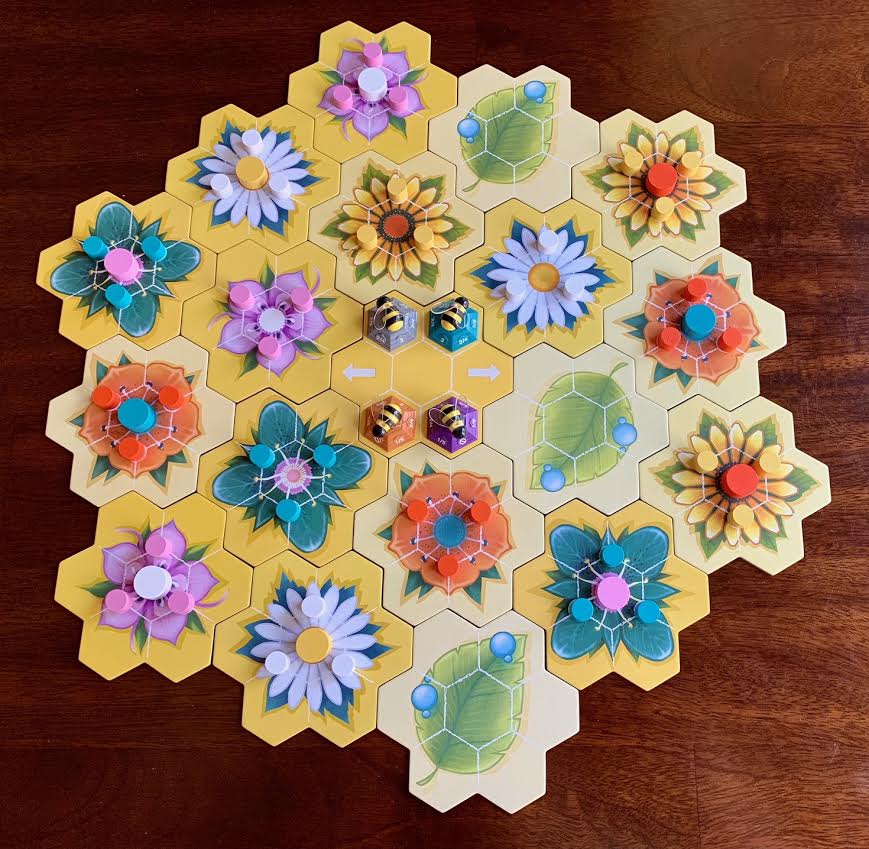 The bee movers have hexagonal bases, on which 5 of the 6 sides bear numbers. These numbers determine how far a bee can move in a given direction: either 1 or 5 spaces, 2 or 4 spaces, or 3 spaces. 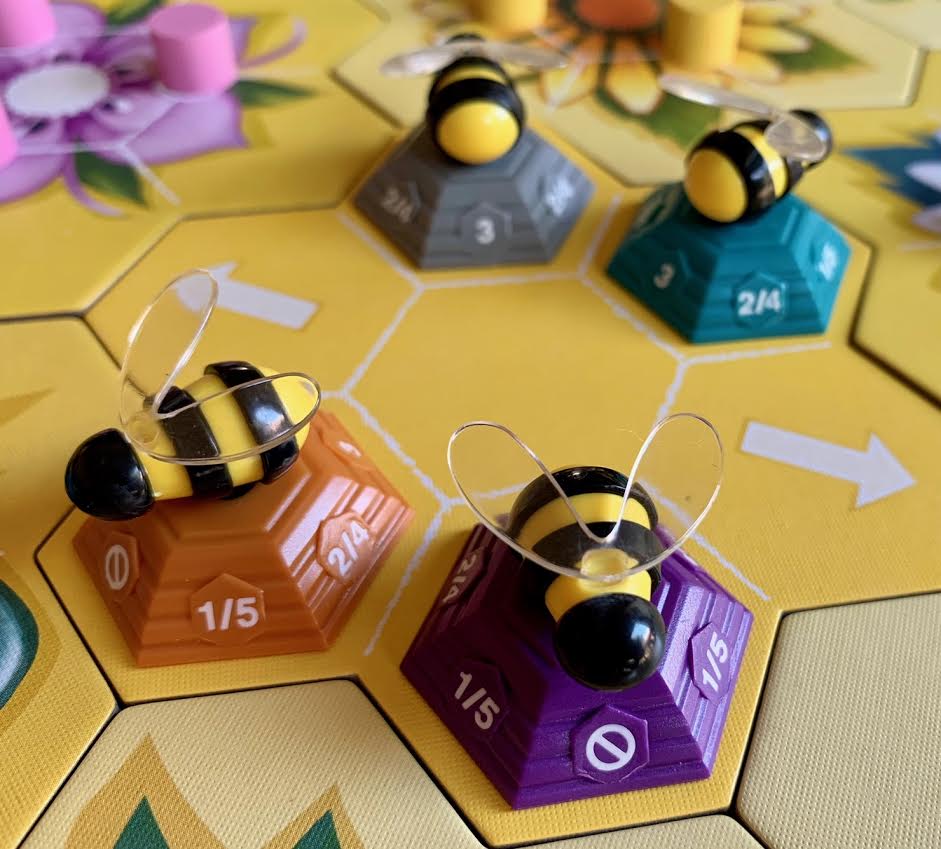 At the beginning of the game, 3 objective cards are placed face-up in the center. These are common objectives, which all players can work toward completing. Each player also has 2 private objective cards that are only for them.

The turn sequence is simple. To begin, the active player chooses a direction and distance for their bee to fly from the 5 options shown on its base. Then, the player rotates the bee so it faces this direction and executes the move. If the bee lands on a space with nectar, the player may immediately take up to 1 large and 1 small nectar token from the space. Alternatively, if the player lands on a leaf tile, on a space with a water droplet, the bee may immediately move again. 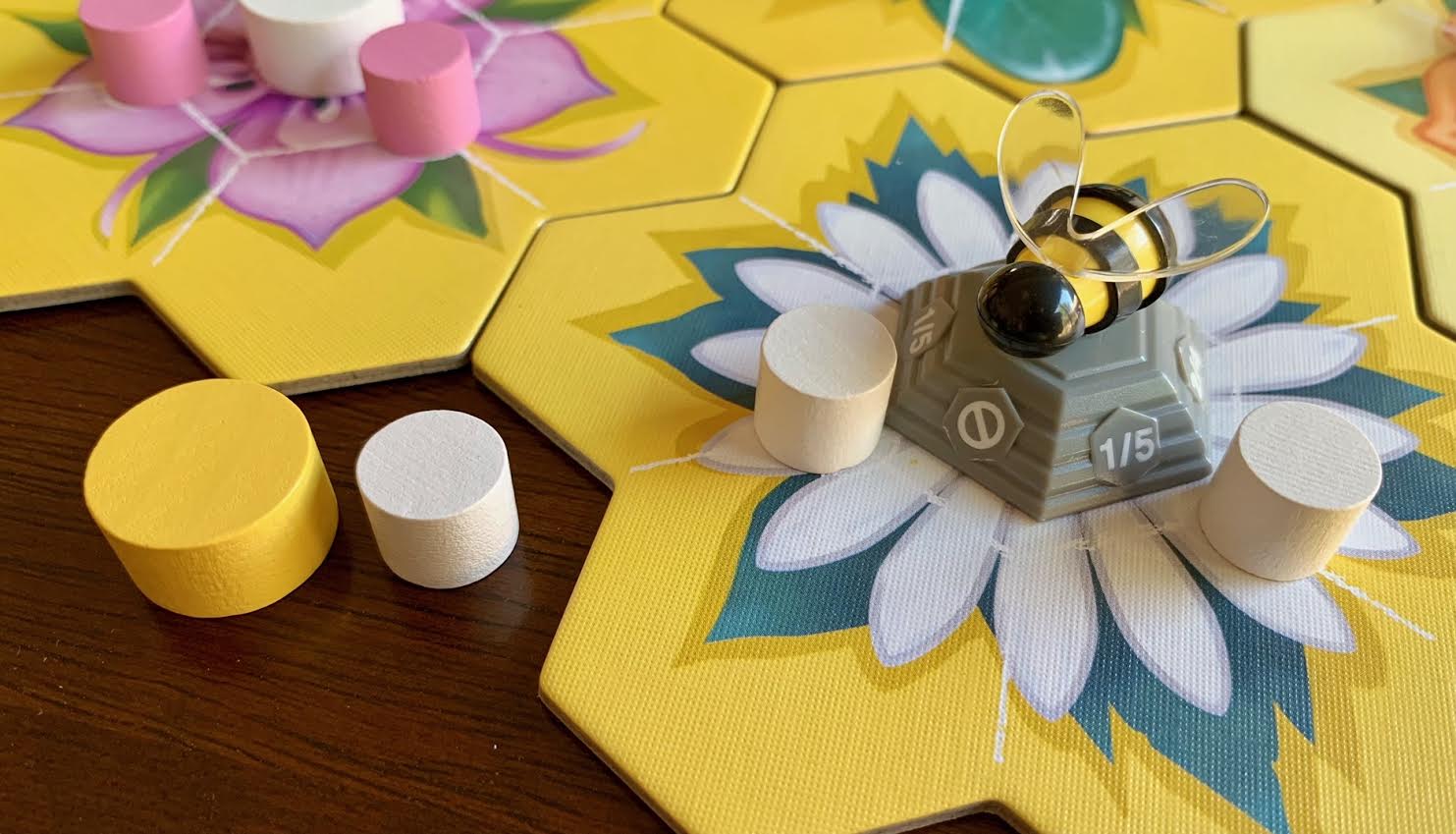 In addition to their private objective cards, each player keeps a personal “honeycomb” tableau. Anytime a player collects nectar, it gets added to their honeycomb, in the row corresponding to the move they just did (e.g. in the “4/5” row if they moved 4 or 5 spaces). At the end of the game, points are scored based on the makeup of players’ honeycombs. 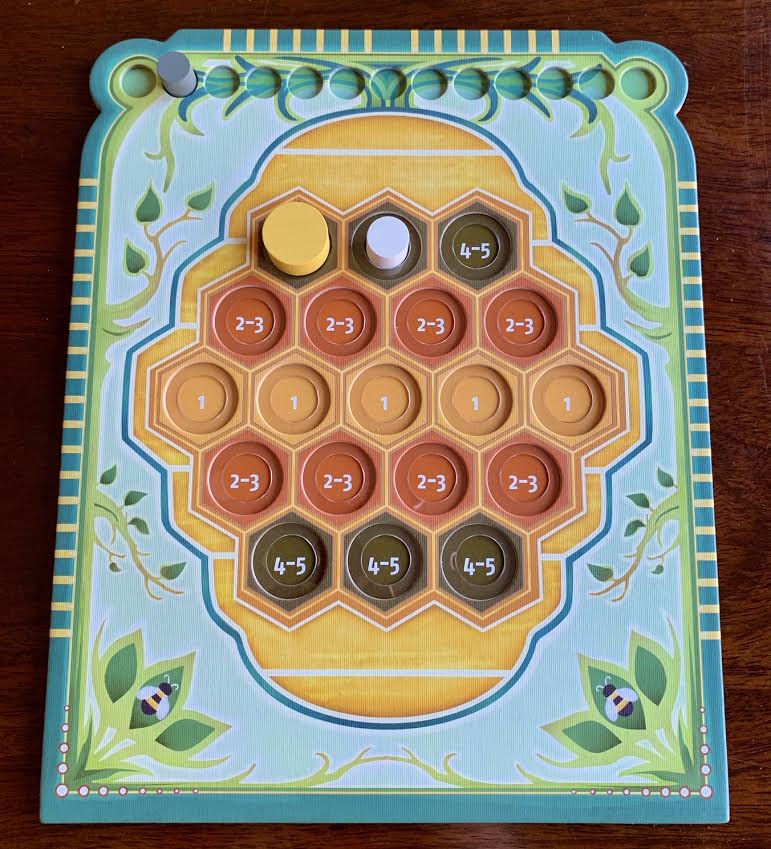 The game continues until a player collects their 12th nectar token. At that time, the current round is finished, and then points are scored according to objective cards.

Beez is a decent offering from Next Move. Like this publisher’s other titles, this game is light on rules, which makes it highly accessible. Beez is not as puzzly as Reef, nor is it as strategic as Azul, but it is still a good time. It plays incredibly quickly; if someone brought it out during a lunch hour at work, players could easily finish 2 or even 3 games.

That said, this speed also brings up my main issue with Beez: for how fast it plays, the game is cumbersome to set up. There are very specific rules for the placement of the tiles, and once they are all set, players have to position over 50 little tokens around the board. It’s not a huge issue, but for a game that might only last 10 minutes, it feels like a lot of preparation.

In spite of this, though, the gameplay is enjoyable and the theme is relaxing; this seems to be the publisher’s modus operandi. Beez is not the strongest offering from Next Move, but it is worth checking out if you are looking for a breezy game with a lovely aesthetic.

Beez is not the strongest offering from Next Move, but it is worth checking out if you are looking for a breezy game with a lovely aesthetic.