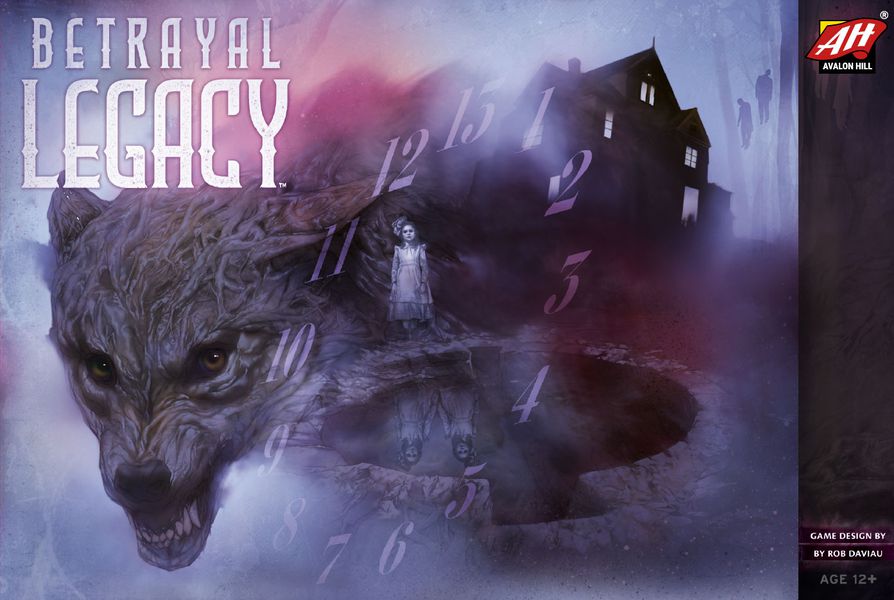 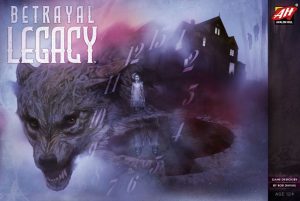 Betrayal Legacy is a reworking of the classic Betrayal at House on the Hill. Using the popular “legacy” style of gameplay, the game is played as a campaign, with each playthrough uncovering new secrets and challenges.

Like earlier entries in this series, this game involves horror scenarios, so players can expect to encounter all manner of ghosts, demons, witches, etc. The narrative involves many unsettling/disturbing events, and while there are humorous aspects to the game, the occult themes permeate the experience.

Whitney Houston sums up my feelings about the original Betrayal at House on the Hill in the lyrics:

(Admit it, you totally scream-sang those lyrics in your head.)

As I’ve said before, Betrayal is amazing. It is responsible for some of my most memorable gaming experiences ever. I love it so much that I used to write my own scenarios, way back when the expansion was nothing but a dream and an empty plea on BoardGameGeek. Even my Twitter handle, @makeahauntroll, is a reference to one of the game’s core mechanics.

Betrayal Legacy is a pants-wettingly exciting idea: it takes the original formula and makes it into a multi-game, story-driven campaign. Spanning hundreds of years, each playthrough has a new generation of explorers braving the house of horrors, and the impacts of players’ decisions carry over from game to game. At last, we can experience the history of the dreaded House on the Hill, and even go outside! (Not literally, of course. We’re gamers, going outside is not our thing.) 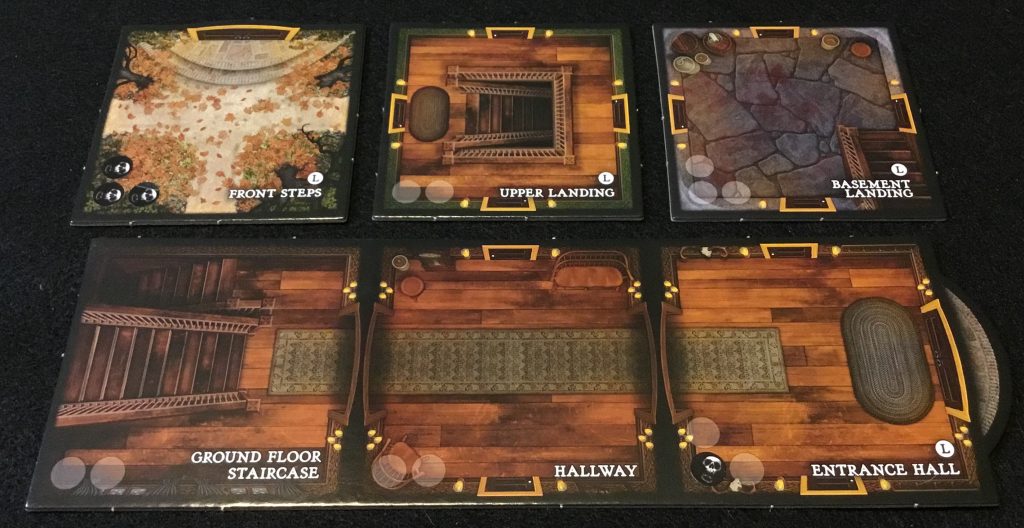 As with any legacy title, it is difficult to review this game effectively without spoiling anything. I’m going to do my best, but pardon any vagueness going forward—I will not go in-depth about specifics of the game because I don’t want to ruin the fun for anyone. Since I have ranted and raved about Betrayal games before, I am going into this assuming that the reader is familiar with the core game. If not, there are dozens of great playthrough videos on YouTube.

Fans of the series basically already know how to play Legacy, or at least how to get started. The first scenario (the “Prologue”) plays very much like a standard Betrayal game. However, the nature of a legacy game is that new rules and systems are added incrementally, with surprises at every turn. This means that each game will offer new challenges, new story elements, and new horrors. A special “Legacy Deck” guides the flow of the campaign—every playthrough, players venture further into the deck, uncovering the mysteries within. 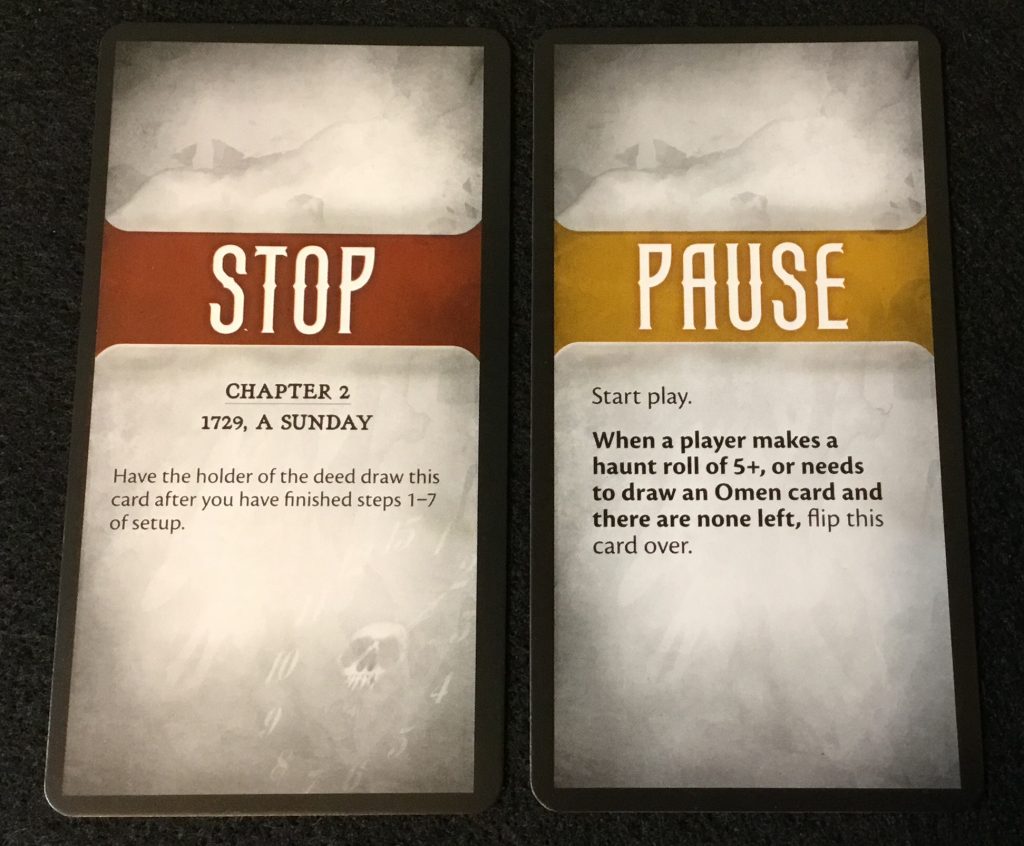 Example cards from the legacy deck.

A few minor differences in this version:

There are other changes to the main game system, but they reveal themselves throughout the campaign (again, spoilers). The best way I can sum it up is that Legacy will feel very familiar to those who have played other games in the series, but it continually adds exciting new twists.

The first Betrayal game changed my life. A decade ago, as a very new gamer, it was eye-opening for me to realize just how “big” a game could be. I had never experienced anything like it, and it played a substantial role in making me a gamer.

In the years since, I have played over 500 unique board games, so my standards for what makes a game “good” have risen dramatically. Looking back, I see that the first Betrayal game is far from perfect. I recognize that most of the Haunts are grossly unbalanced, the rules have major issues, and luck plays a HUGE role in the outcome. Despite all this, however, it remains one of my favorites. When I reviewed it a year ago, I called it “a flawed masterpiece,” and “the best bad game ever made.” 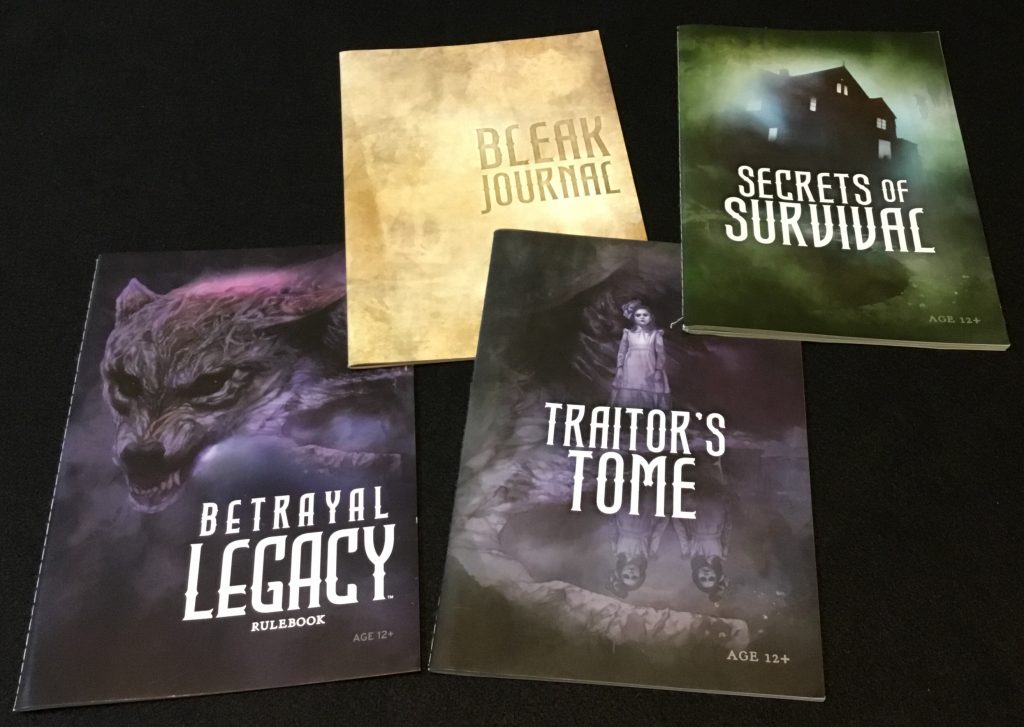 Want to know what the Bleak Journal is? You’ll have to find out for yourself.

In the 14 years since the original debuted, the industry has seen significant changes. Betrayal Legacy feels like a modernized version of its predecessor, and playing it gave me a “wow” experience similar to the one I had with its older brother all those years ago. Embracing 2018 design sensibilities, it sands off some of the rough, 2004 edges. The rules are crystal clear, the difficulty scales according to player count, and the Haunt scenarios do not seem overly complex. I haven’t played nearly all of them yet, but the ones we have tried so far have felt sufficiently playtested and balanced, with a few exceptions.

The core of the game remains the same: exploring the house, finding arcane artifacts, inching closer to the inevitable, traitorous climax. The legacy elements add a new level of dynamic gameplay, and they help the narrative to emerge over time. The stories are cohesive, and though it’s tough to give an example without spoiling anything, they just feel “better” than those before. Even the prologue scenario—sort of “Game Zero” in the campaign—had an AMAZING twist. (Seriously, it may have been the best Betrayal scenario I’ve ever played.)

Not everyone in my game group felt as positively, however. To some, the legacy aspects were not as engaging as in, say, Pandemic Legacy. They pointed out that Betrayal Legacy puts more emphasis on steadily adding content to the game, and less on meaningful player decisions that permanently alter the course of the narrative.

That said, the simple thematic change of spanning the campaign over multiple centuries makes the story feel more grandiose. The original game was set around the year 2004, so every scenario took place in the modern day—there was never a sense of the passage of time. Instead, each game was a self-contained, one-off experience. Legacy offers something really cool by allowing players to not only see, but CREATE the house’s long, storied history.

Speaking of that, Betrayal Legacy bears a number of Easter-egg references to the original. The painted figures correspond to the modern-day explorers, from the teddy-bear-wielding lady in yellow to the elderly monk to the muscle-bound guy holding a torch. It’s cool how these details thematically connect the two games. Similarly, rooms like the “Unfinished Room” leave players to speculate about how the house developed over the centuries. (My guess, if you have the first edition of the base game, is that the Unfinished Room somehow became the Underground Lake upstairs. Don’t ask me why, I just needed to include that in-joke.) Want to know how the Collapsed Room collapsed? This game will tell you. Want to know how the Bloody Room got bloody? This game will tell you.

Betrayal Legacy‘s in-game decisions feel like they matter a bit more. The knowledge that each game’s outcome may have recurring effects adds weight to players’ choices. Unlike the other games in the series, which are “reset” after every run-through, the adventurers must live with the results of every Legacy game, good or bad. In a cool, narrative callback, characters from one game may show up again in another game, perhaps even from beyond the grave.

The majority of the scenarios feel balanced and intuitive, but a few of them suffer from classic Betrayal problems. It could be confusing language in the Haunt books or a major advantage given to one side and not the other, but whatever the reason, a handful of the Haunts don’t work so well. I’ll admit that this is par for the course in the Betrayal series, but I was hoping it would be a little less pronounced. One or two scenarios lost players’ interest altogether, because they were either frustrated/confused or just felt that victory was impossible. In my experience, though, such scenarios are the outliers. In general, they are well-crafted.

New tiles will be introduced periodically.

Circling back to the base game, it’s cool to revisit it after playing Legacy. Players have a whole new appreciation for it, because they got a front-row seat to everything that came before. If you encounter, say, a witch in the base game, there may be this meta-moment of “Whoa, remember when we encountered her back in the 1700s?”

Obviously, I had a great time with Betrayal Legacy. That was all but a foregone conclusion. If you crave atmosphere and narrative in tabletop games, it doesn’t get much better than this. Whether or not you have played the original, Legacy is worth a try, and it gets a major recommendation from me.

Just make sure you don’t roll all blanks. That never ends well.

A review copy was provided by Wizards of the Coast.

Betrayal Legacy feels like a "2.0" version of the original. It is not perfect, but its dynamic, changing gameplay helps draw players into the story.