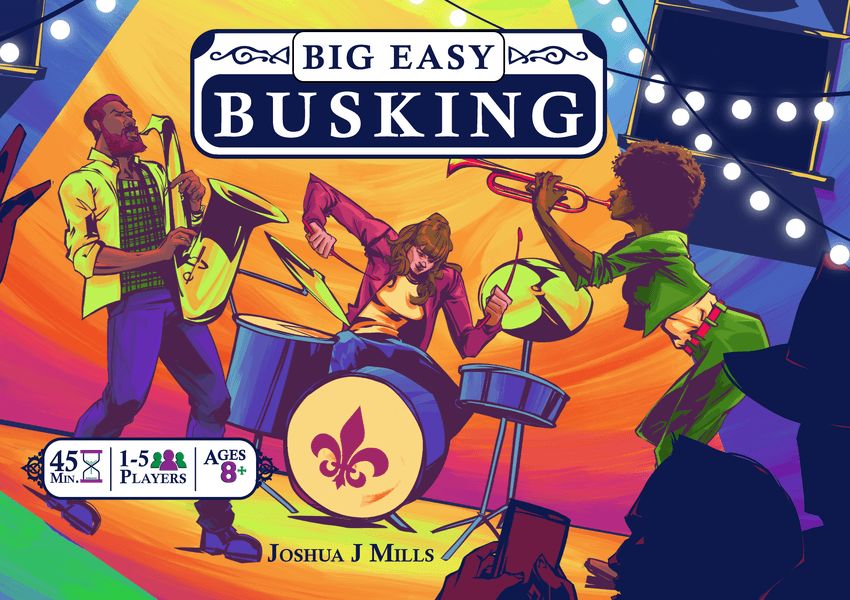 Big Easy Busking is a musically-themed area control game in which players will play songs to crowds on the streets in New Orleans. Players will try to match the mood of their songs to the crowds for extra money, while trying to balance the band’s energy and tips. The winner of the game is the player who goes home with the most money from their busking. So, do you think you have what it takes to play on this scene? 3, 2, 1, let’s go. 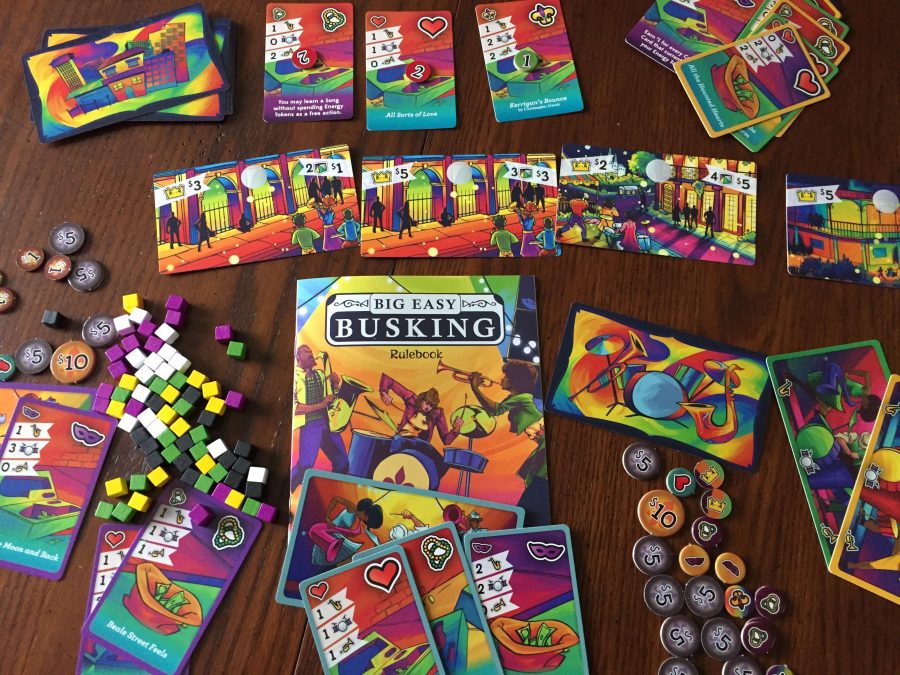 In the first round of Big Easy Busking, players will only be able to learn a song or start playing a song, but in subsequent rounds they can finish playing any song they started in a previous round. A standard round structure goes:

Players commit cubes to their reserve to learn a song, or pay the cost listed to start playing a song from their band member’s remaining energy cubes. Song cards can be either standard songs, which are out all game (these represent songs most or all musicians know), or special songs from players’ hands. The cubes it costs to play the song (including any +1 or +2 cost for standard songs) go on the card and are then placed in part or in full when the song is finished on the following turn. This gives other players a chance to see where everyone is committing resources and adapt accordingly. 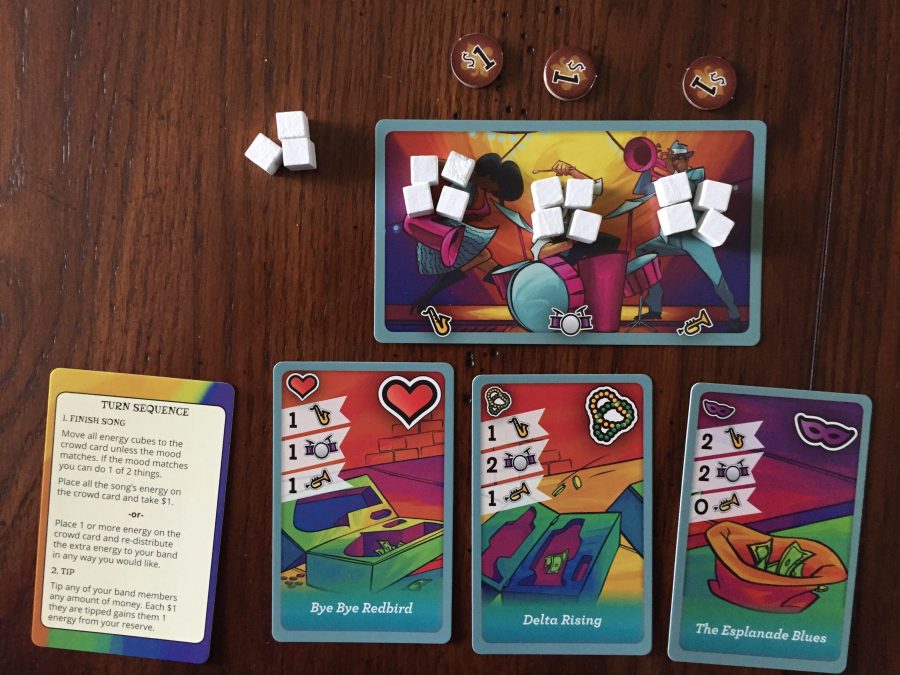 The starting setup and songs for the blue player.

After the first round, players will have the option to finish playing a song, which they must do if they started on their previous turn. When finishing, players first need to check if their song’s mood matches the crowd’s mood token; if it does not, they simply transfer all their cubes over to the crowd card. If it does match, however, they may either place all their energy cubes onto the crowd card and get $1 from the bank, or place 1 or more energy cubes onto the crowd card and return the rest to their band members any way they want.

Once everyone passes due to not being able to take any more actions, the round ends. Locations pay out based on who has the most cube, and bonuses may be awarded for reaching a certain threshold. Everything is then reset, and the locations are cleared and new ones brought out. 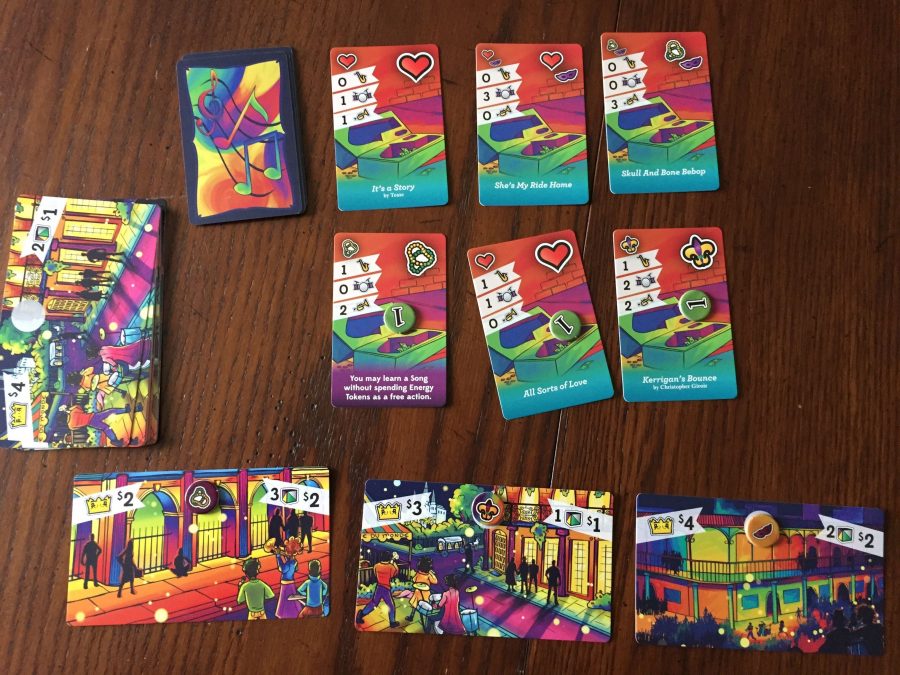 The melody market (songs you can buy), standard songs (songs that anyone can play for +1 or +2 extra energy), and crowd cards.

I was a bit skeptical about a game where I was in charge of a group of street musicians in NOLA, but once I realized it was basically an area control game with a little hand management, my skepticism faded. Big Easy Busking does a good job drawing players in, thanks to its mechanics and vibrant colors. Tipping one’s crew feels painful early on – players start with just a measly $3 – but it is necessary to free up cubes. Players who don’t plan ahead may end up a buck short when they really need it, which can be frustrating but not game-breaking. My only other (minor) gripe is that the cubes don’t have any means of staying put, which means table bumps can cause headaches. I would love to see a deluxe version with recessed player boards to keep the cubes separate.

Overall, Big Easy Busking won me over easily with its bright colors and deep strategy. It’s like a more fun, more extensive Smash-Up. Music-themed games are rare, but I enjoyed this one. It also includes a solo mode (a near-must in COVID-era gaming), and thanks to its variable setup with different standard songs, it has high replay value. If you have a chance, you should definitely check out Big Easy Busking.

With its bright colors and deep strategy, Big Easy Busking will win players over as they vie for control of the jazzy streets of New Orleans.