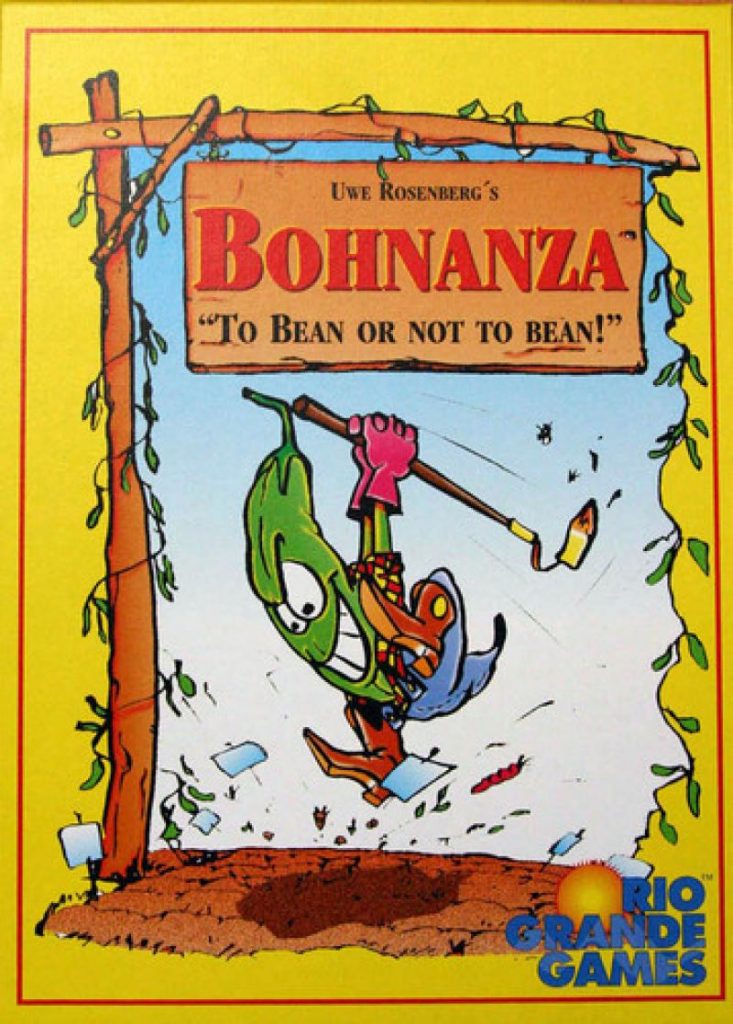 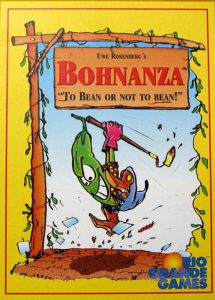 Bohnanza is a classic card game from prolific designer a Uwe Rosenberg. His first major hit game, Bohnanza puts players in the role of bean farmers, trading and negotiating to get the best beans they can. With silly artwork, lighthearted interaction, and interesting hand management rules, Bohnanza is still in print twenty years after its original release.

Bohnanza is a great, family-friendly game. No objectionable content.

The late 1990s were an odd time for board games. Catan had created a huge stir in 1995, followed by El Grande in 1996, but the hobby game industry was still just beginning to take off in the US. Magic: the Gathering dominated the market stateside.

1997 yielded three games that have really stood the test of time: For Sale, Tigris and Euphrates, and my personal favorite, Bohnanza.

Bohnanza was created by future-superstar designer Uwe Rosenberg. You may know his name from games like Patchwork, Agricola, and Caverna, but his first major hit, a whole decade before Agricola, was a silly, social card game about trading and planting beans. Bohnanza is still wildly popular today, with new expansions and versions coming out twenty years later.

Bohnanza is a simple game. It uses a deck of cards, showing various types of beans. Players have a hand of these bean cards, which they try to play (“plant”) in front them, in one of two columns of cards (“fields”). Each field may only have one type of bean in it, so if a player plants a chili bean in one of his two fields, he can then only plant additional chili beans there. Should the player wish to change the type of bean in one of his fields, he must first “harvest” the field, picking up all the bean cards there. He can then plant any type of bean in this newly-vacated field, but once he plants the first card, the field again becomes locked into this specific type of bean. The ultimate goal of the game is to have the most money at the end, which I’ll explain in a moment.

The bean cards have several pieces of information on them. Each one lists the quantity of that card in the deck, ranging from just a few to over twenty. In addition, each card has multiple levels of money payouts (worth one to four coins), depending upon the number of that bean in your field. Below are two examples: 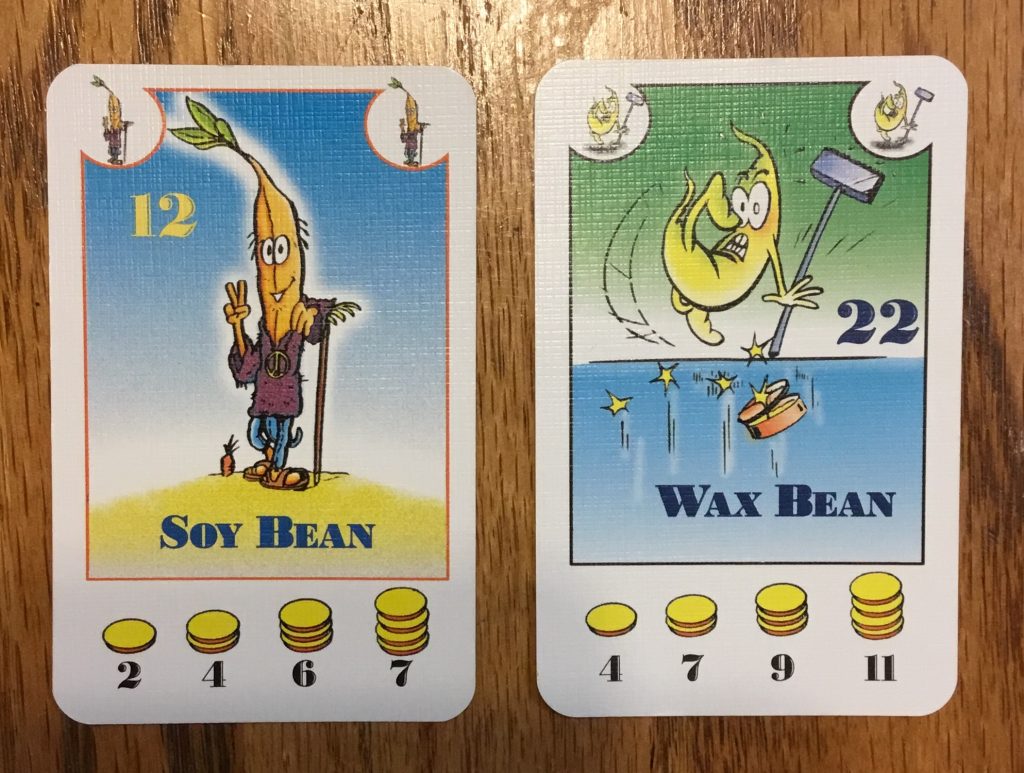 Looking at the soybean, you can see there are twelve of them in the deck. Harvesting two of them is a worth a coin, harvesting four is worth two coins, etc. Wax beans are much more plentiful, but that means they require more cards to get the same payout as soybeans.

The only way to get money is by planting and harvesting beans. The back of each card represents one coin. When someone harvests beans, he discards some of the cards, but may keep some as payment, turning them over to their coin side.

To illustrate, if a player were to harvest seven wax beans (worth a total of two coins, see above), he would pick up all seven cards from that field, discard five of them, and put the other two face-down in front of himself as money (two coins toward his final score). This is a very intriguing subtleties of the game, because anytime someone makes money harvesting beans, the remaining quantity of that bean changes, making it slightly harder to collect going forward.

The most interesting rule in Bohnanza, by far, is the card order rule. In this game, cards must be kept in the order they were acquired, meaning players can never rearrange their hands. This is critically important to the game system, but it will drive some folks crazy to not be able to put like cards next to each other.

At the start of a player’s turn, he must plant the first card in his hand (i.e. the frontmost card). If he has a place to plant the card, great. If not, he must harvest a field to make room for it. Once he has played this first card from his hand, he may optionally play the second as well.

After he has played one or two cards from the front of his hand, the player then flips over the top two cards of the deck. This is where the negotiation part comes into play. Players may use the cards they flipped over to try to trade with others.

Here is an example of how this might look:

Suppose a player’s bean fields currently hold coffee and soy beans. It’s the start of his turn, so he must play the first card in his hand. Thankfully, it’s a coffee bean, so he has a place for it; he places it in his coffee bean field. The second card in his hand is a red bean, so he opts not to play it, since he doesn’t have a field containing red beans. He then flips over the top two cards of the deck: a soybean and a blue bean. Since he has a soybean field, he can just take that card and plant it immediately, but that leaves the blue bean. He is not interested in taking it, because it will mean he’d have to harvest a field, and he is not ready to do that. He sees, however, that another player has a blue bean field. He can try to negotiate a trade with that player, perhaps along the lines of “I’ll trade you the blue bean for a soybean.” Any traded cards must come from players’ hands, never from their fields. Once all trading is complete and all trade cards planted, he draws three cards, which go to the back of his hand, and the turn passes.

Occasionally, no one will be interested in trading for a flipped card. If the active player faces this situation, he must take and plant the untraded card(s) himself. This can be very detrimental, as it might mean he has to harvest a bean field he was hoping to further expand. Because of this rule, it can be strategic to simply give cards to other players, to avoid having to plant them yourself. My group often does “IOU’s,” where a card is gifted with the understanding that, in future, the recipient will repay the favor. (Whether or not that happens depends upon who is playing…) 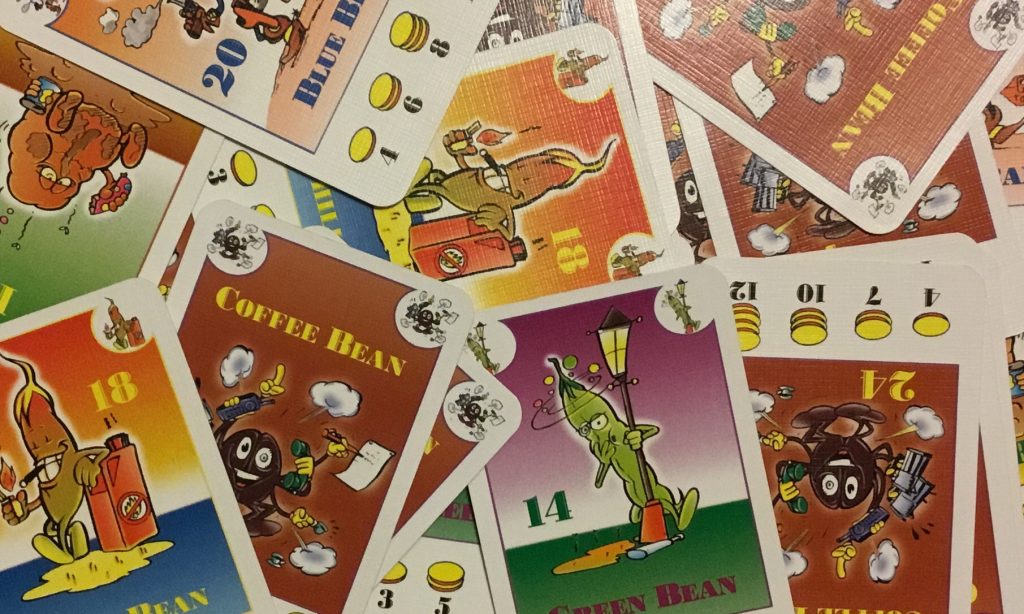 The rule of maintaining card order in hand encourages players to trade. The active player must always play the first card in his hand, so if someone’s turn is coming and his first card is not what he wants, he can try to trade it away, thus freeing up a card he actually needs.

When the draw deck runs out, the discard pile is shuffled to form a new deck. When the deck is exhausted for the third time, the game ends. This happens much quicker than you’d expect, because the deck keeps getting thinner as more cards are turned into money.

The trading is definitely the most fun, engaging part of Bohnanza. As a big fan of the negotiation mechanism, I love wheeling and dealing. Negotiation games can get extremely cutthroat, but Bohnanza is fairly “nice.” It’s simple and accessible, but offers a bit of depth as well.

It’s strange, I’ve heard many reviewers say that Bohnanza falls flat with larger player counts. I think just the opposite. The more players at the table, the more trade potential everyone has, and thus, the juicier the negotiation. Six or seven player games welcome a great deal more competition in trade offers, and, being that this is a game about deal-making, isn’t that a good thing?

That’s not to say that smaller groups won’t enjoy Bohnanza. The game allows players to purchase an additional bean field for three coins, which can prove incredibly useful in three or four player rounds. I guess what I’m getting at is this game scales very well—better than you may have heard.

I’m not always a big Uwe Rosenberg fan, but Bohnanza is amazing. It is easy for new players to understand, but it rewards repeat plays. It’s a favorite among my game group, and I highly recommend trying it out.

Bohnanza falls just outside of my Top 10. I struggle to find any real negatives with this game. It's clever, innovative, and an awesome experience through and through.