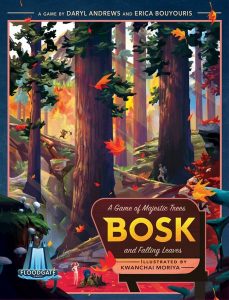 Bosk is a family game of majestic trees and falling leaves. Thematically, this beautiful experience is played over 4 seasons: 2 action phases and 2 scoring rounds. It is an enjoyable game for gamers and non-gamers alike.

A couple of years ago, I was blown away by Sagrada, a game I considered the best release of 2017. When I learned of Bosk, another gorgeous game co-designed by one of the creators of Sagrada, I was immediately interested.

Bosk takes place at a national park, over the course of 4 seasons. At the beginning, each player receives a set of pieces in their color, consisting of 8 trees, 8 numbered tokens, a squirrel, and a pile of wooden leaves. 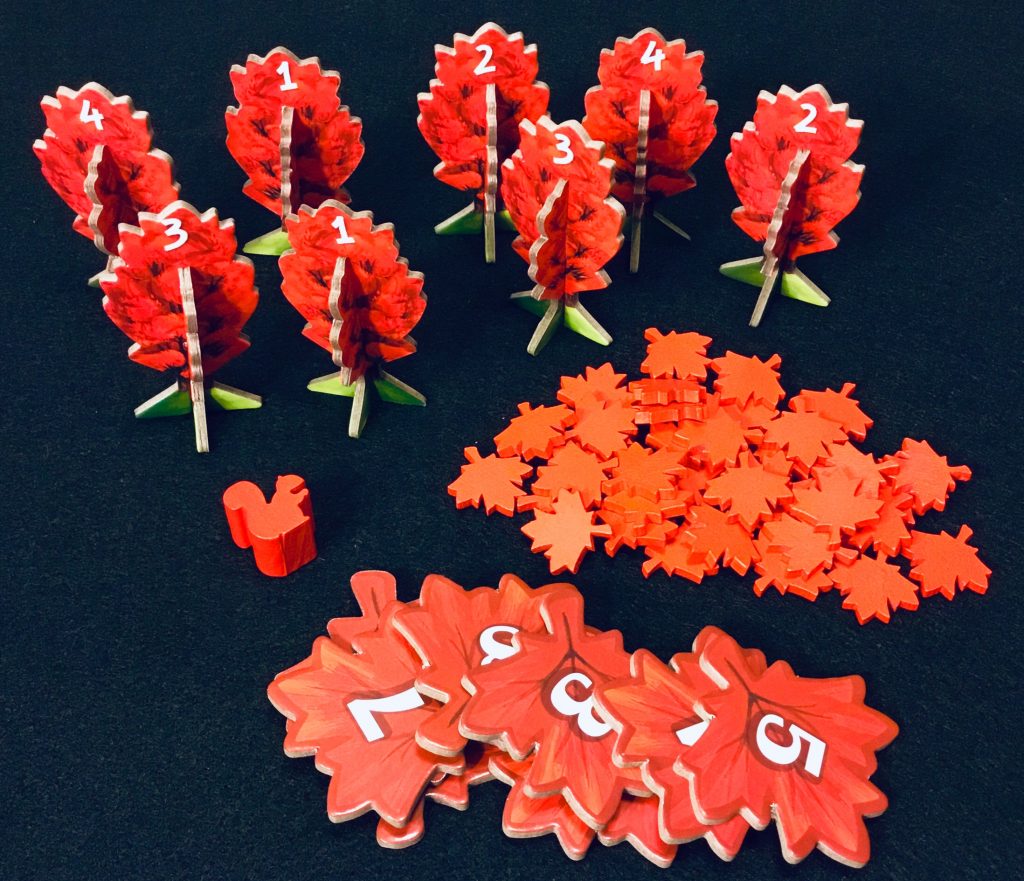 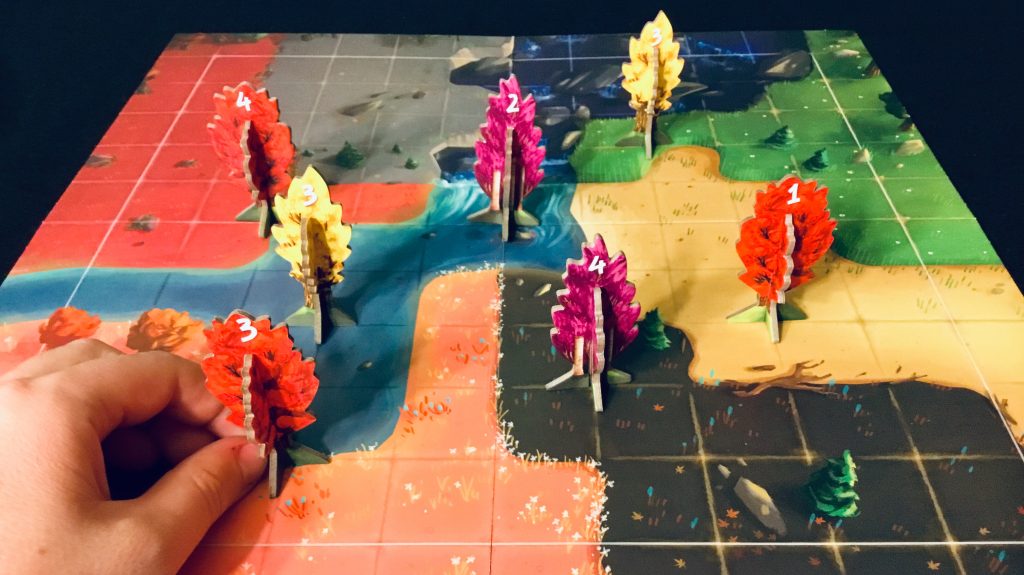 When planting trees in the spring, players can place them on any open intersections, but it is usually in their best interest to spread them out around the board, rather than planting them all in a clump. Once everyone has planted their final tree, a scoring round (AKA the summer season) occurs. Players examine each row and column on the board individually and count up the value of each player’s trees. 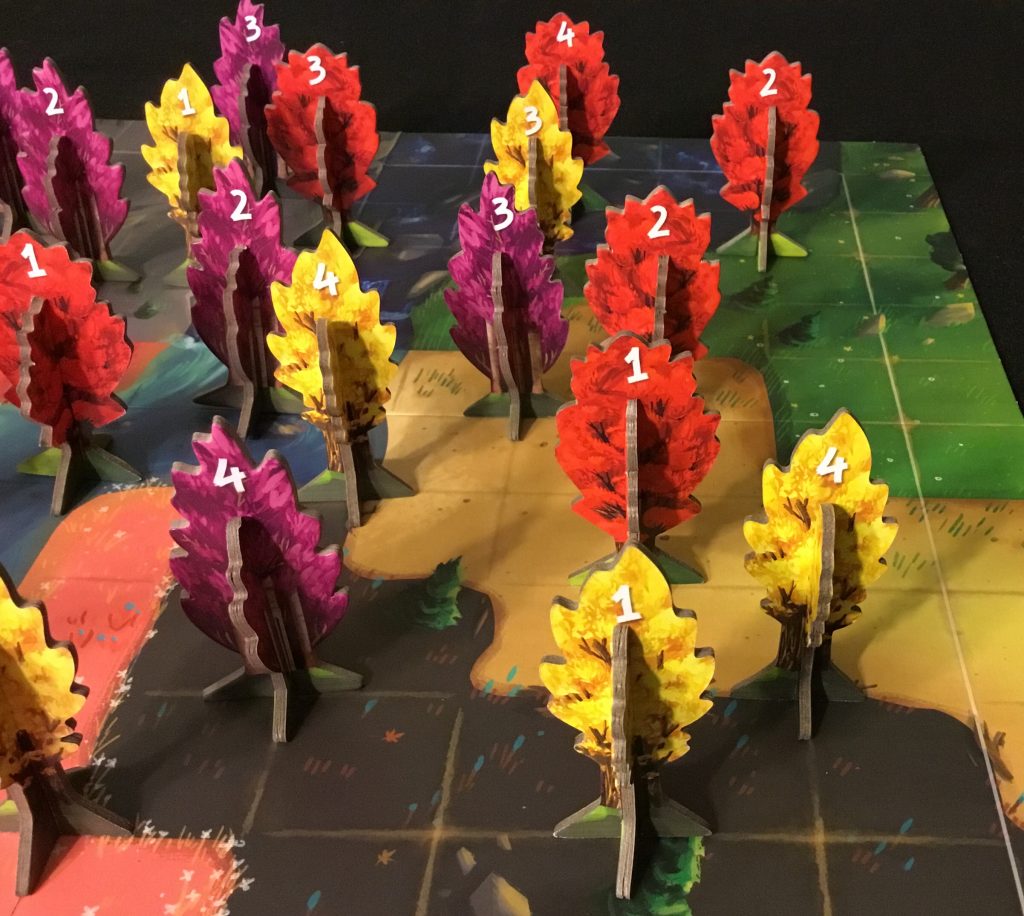 After the summer scoring round, the player with the lowest score decides the direction the wind will blow in the fall. A smaller, supplemental “wind” board is placed next to the main board, on the side of her choice.

This board contains 8 spaces, each showing a certain wind direction. For each space of the wind track, players will all choose a tree in their color to drop its leaves. The chosen tree is then removed from the board.

Players’ goal in this second half of the game is to spread their leaves around the park. The board features a number of colored regions (different terrain areas), and during the winter season, each one will be scored individually, awarding points to the players who have the most and the second-most leaves there.

To place leaves, players take turns playing one of their leaf tiles and adding the listed number of wooden leaves, in the general direction of the wind, originating from their chosen tree. For example: 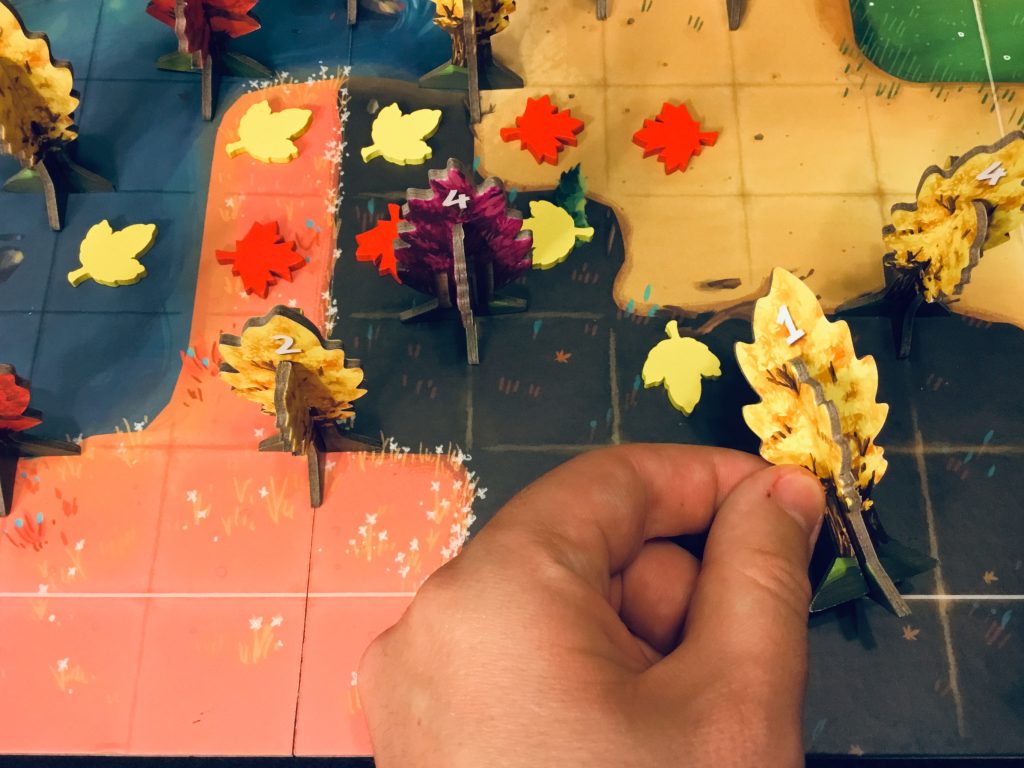 Suppose the wind is blowing west. The yellow players spends a “5” leaf token to place 5 wooden leaves in a westerly direction. The tree from which the leaves fell is then removed.

Players can place leaves on top of opponents’ leaves, but they must discard an extra one to do so. Additionally, each player has a squirrel in their color, which can be placed within 3 spaces of a tree to essentially block a space indefinitely – leaves cannot be placed on a space with a squirrel.

After every tree has dropped its leaves and been removed from the board, players count up the number of leaves in each area. Winter scoring works similarly to summer: the player with the most leaves in an area scores 5 points, and the player with the second-most scores 3. If there is a tie for second place, all tied players get 1 point, and if there is a tie for first place, all tied players earn 4 points and second place is not awarded. In the rare event that a player is the only one with leaves in an area, she earns 8 points.

At this time, the player with the highest score wins!

At its core, Bosk is somewhat abstract, but its theme works really well. It has a distinct sense of the passage of time, as if the seasons were actually changing before players’ eyes. I felt oddly wistful removing the trees after they dropped their leaves; it brought to mind the melancholy feeling I often get at the onset of winter, a perfect emotional response to the theme.

Bosk’s 2-act structure is quite unique – I have only seen this type of format used in a few other games. At its midpoint, the gameplay changes from one style of area control to another, a tonal and mechanical shift. It’s interesting that in the spring, players have to think about the “now” AND the “later,” to consider not only how to eke out majorities in the rows and columns, but also to ensure they have good board positions for the winter. In the second half of the game, players have the option to place their leaves aggressively, covering their opponents’, but doing so limits how much ground they can cover since it costs more. I wouldn’t call Bosk a brain-burner, but it definitely has its nuances. 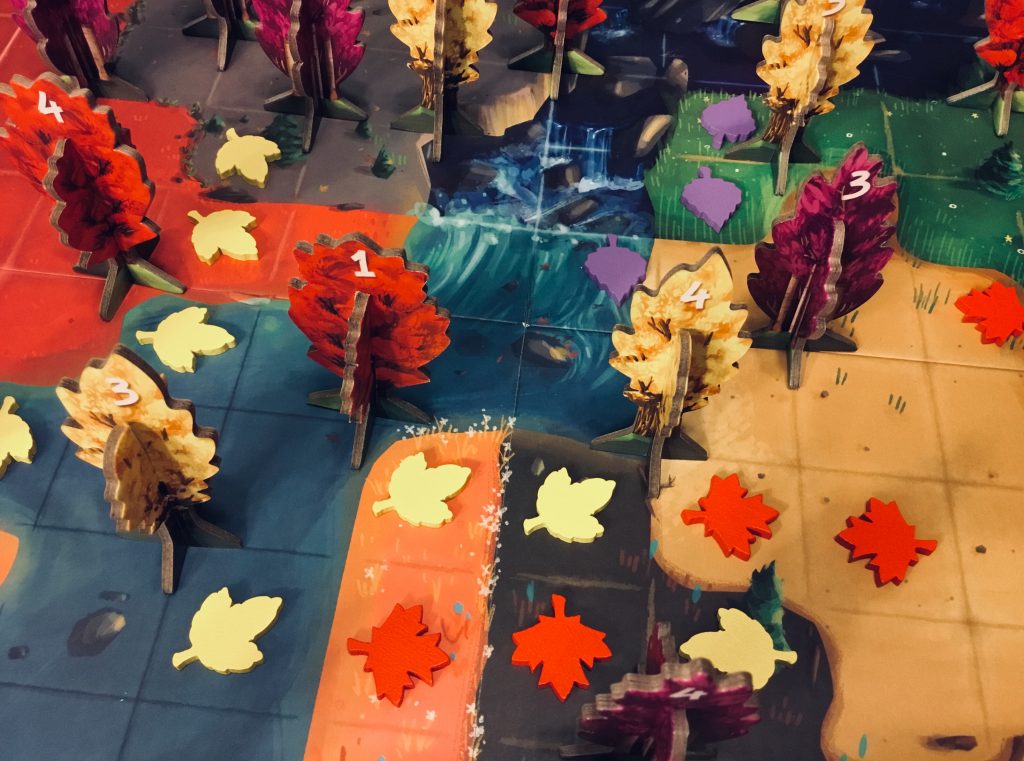 I have played multiple rounds of Bosk at different player counts, and it seems like 3 players is its sweet spot. Since the points for area control are awarded to first and second place, scoring in a 2-player game doesn’t always feel meaningful; if both players tie for an area, its scoring just becomes a wash. However, in a 3+ player game, there is likely to be at least 1 player who does NOT score points, which makes the scoring feel more significant. Some members of my group felt that the board was too crowded at 4 players, so 3 seems to be the happy medium. (It’s worth noting that the board scales according to player count. Personally, I enjoyed the 4-player experience.)

This game looks absolutely stunning on the table. Like Sagrada, its aesthetic draws players in with beautiful, vibrant visuals. Bosk’s production is very nice, with storage trays for players’ components, oversized cardboard tokens, and a whole mess of uniquely-shaped leaves in each color. The box art from Kwanchai Moriya is lovely, as usual. Overall, Bosk is a high-quality product and a faithful “cousin” to Sagrada.

I enjoyed this game very much, and I anticipate it joining our regular game night rotation. This is definitely one to check out.

A review copy was provided by Floodgate Games.

Bosk is lovely to look at and engaging to play. Definitely worth checking out.