Aza Chen’s games are hit or miss for me, but Bubble Tea was intriguing because I tend to love puzzle games, especially ones that involve spatial reasoning. Bubble Tea is technically two games in one because it includes two different modes of play, but both games have the same basic idea behind them.

In this game, players try to quickly arrange transparent, plastic cards to match a specific set of symbols. To begin the game, everyone receives a set of nine clear cards, each with a number of icons printed on them. 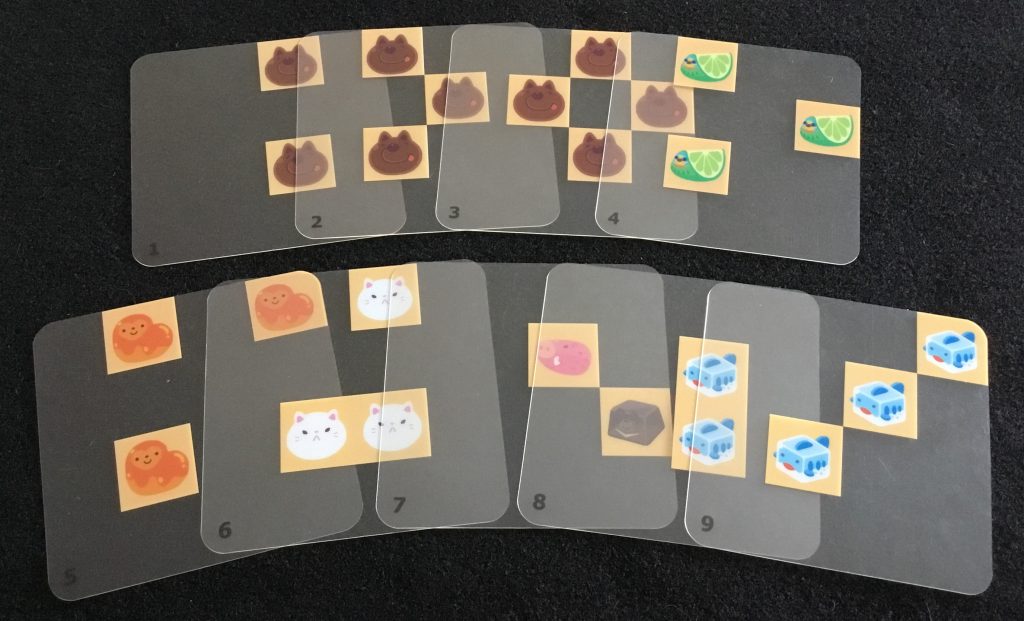 In addition to these, all players receive two “normal,” double-sided cards, called “tea bases.” Tea bases feature a grid of squares, on which the transparent cards will be placed. 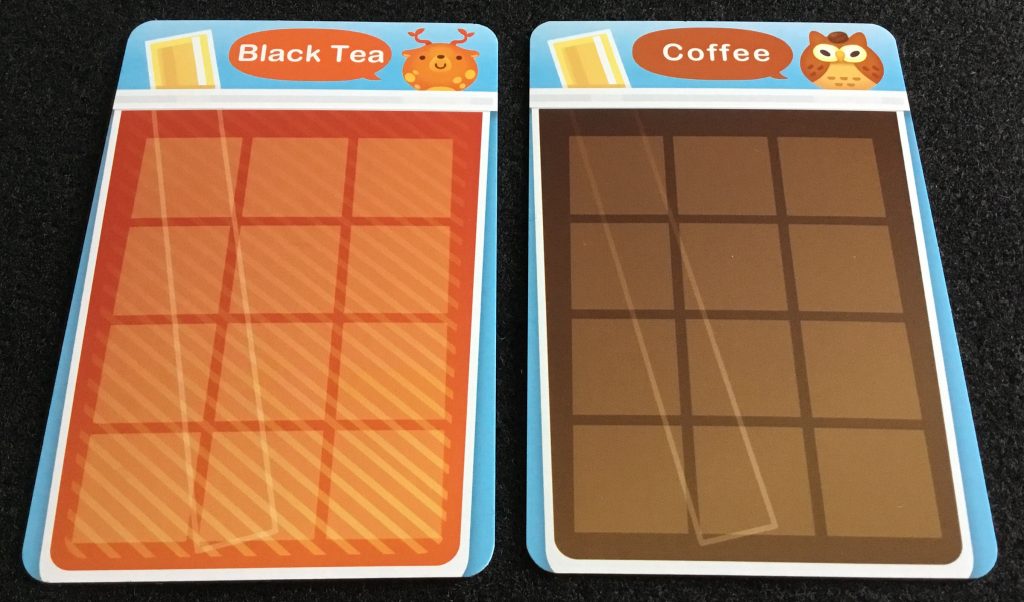 The game comes with a large, plastic cocktail shaker, which acts as a super-fancy dice roller. (I must admit, it is very fun to play with.) 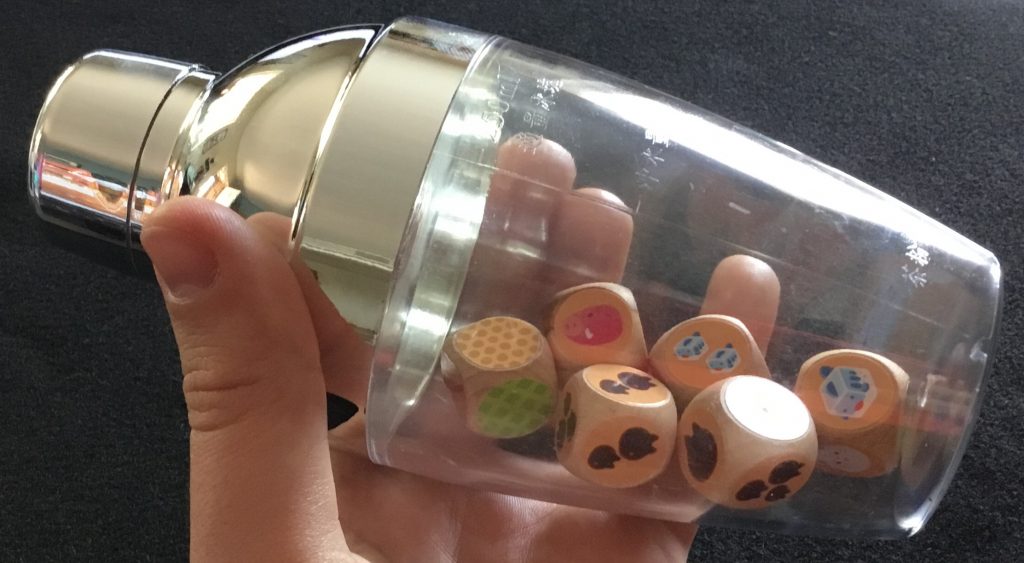 To start a round, a player rolls all the dice. Here is an example outcome: 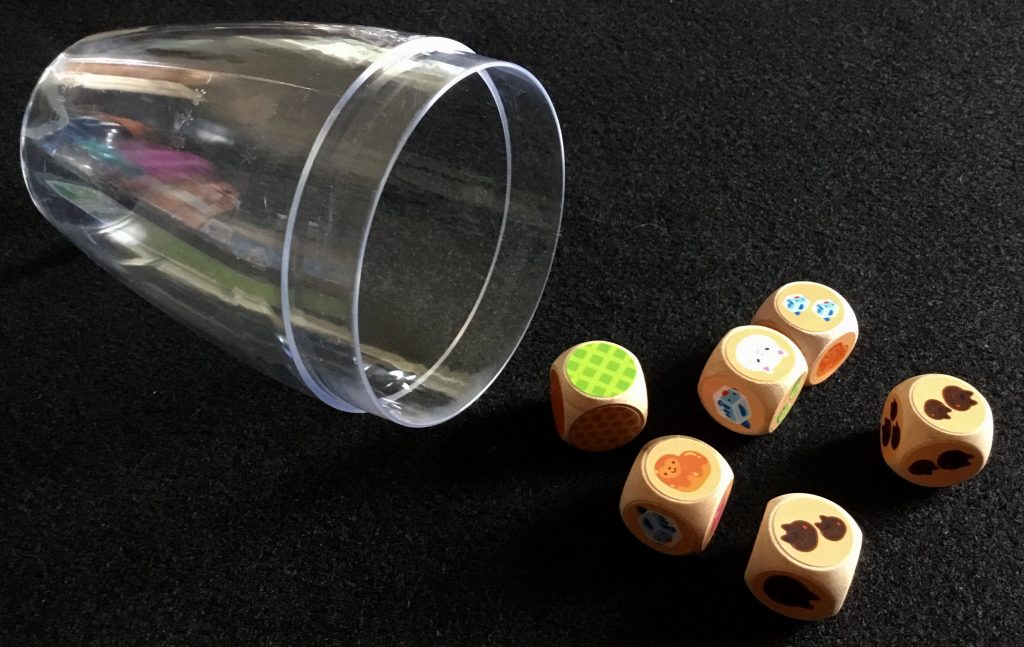 Notice that one die shows a green result—this means that players must organize their clear cards on their green tea base. This “color” die always determines the base color—the other five dice decide what symbols are required. To solve this puzzle, players will need to place four brown, two blue, one orange, and one white icon on the green card.

Then, in real time, players scramble to arrange their cards to meet these requirements. They are allowed to cover one symbol with another (in fact, they will often HAVE to do this in order to succeed). The first player to exactly match the symbols rolled wins the round and earns a customer card, worth points at the end of the game.

Here is a possible example of a correct solution (note that the clear cards can be rotated): 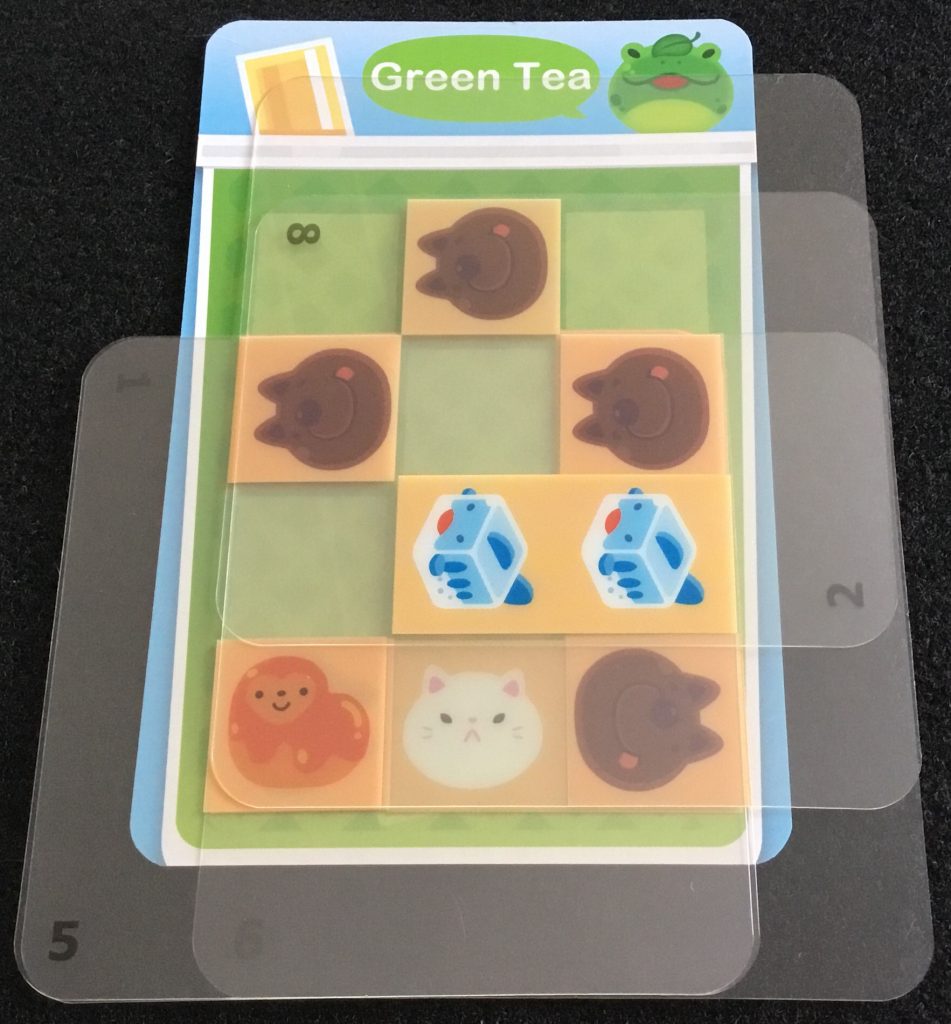 And that is essentially all there is to it. The alternate game mode works similarly, but instead of dice, the recipes come from the other side of the customer cards. 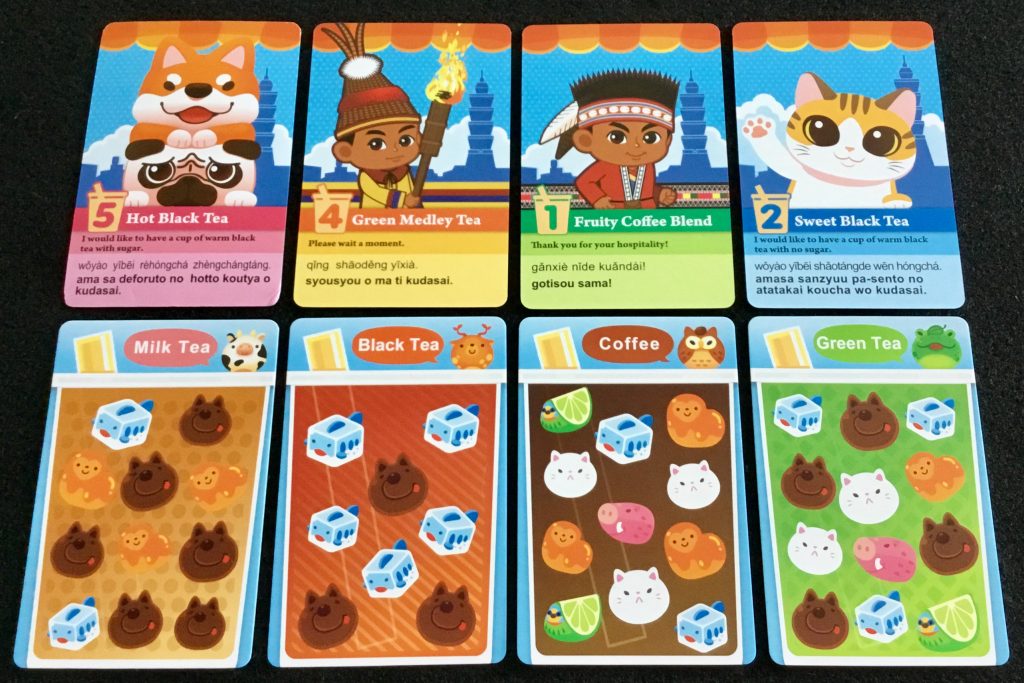 In this version, players each have their own puzzle to solve, based on the icons on their card. It’s ostensibly the same game otherwise, but it’s a nice addition that offers some extra variability.

Bubble Tea was a pleasant surprise. As I mentioned in the beginning, I have a predisposition toward spatial puzzles, so this game appeals to me. It has a frenetic pace, and I like that players can come up with multiple, correct solutions.

The rules are incredibly easy, and can basically be taught in one sentence:

“Be the first to arrange the clear cards on the tea base so only XYZ symbols are showing.”

Because of this simplicity, Bubble Tea is a good choice for kids and families. The tactile quality of the shaker is very nice, and adults will have just as much fun playing with it as kids will.

The game looks nice overall, but it has a couple of minor production issues. First, the die faces are stickered on rather than screen-printed or engraved. This is not a huge deal, but over time, they will likely start to wear/peel. Additionally, there doesn’t seem to be a great way to fit everything back in the box after playing. Certain components can be stored directly in the shaker, but not all. Maybe I’m just missing something, but every time I try to clean up the game, the box seems to bulge like I packed it wrong. 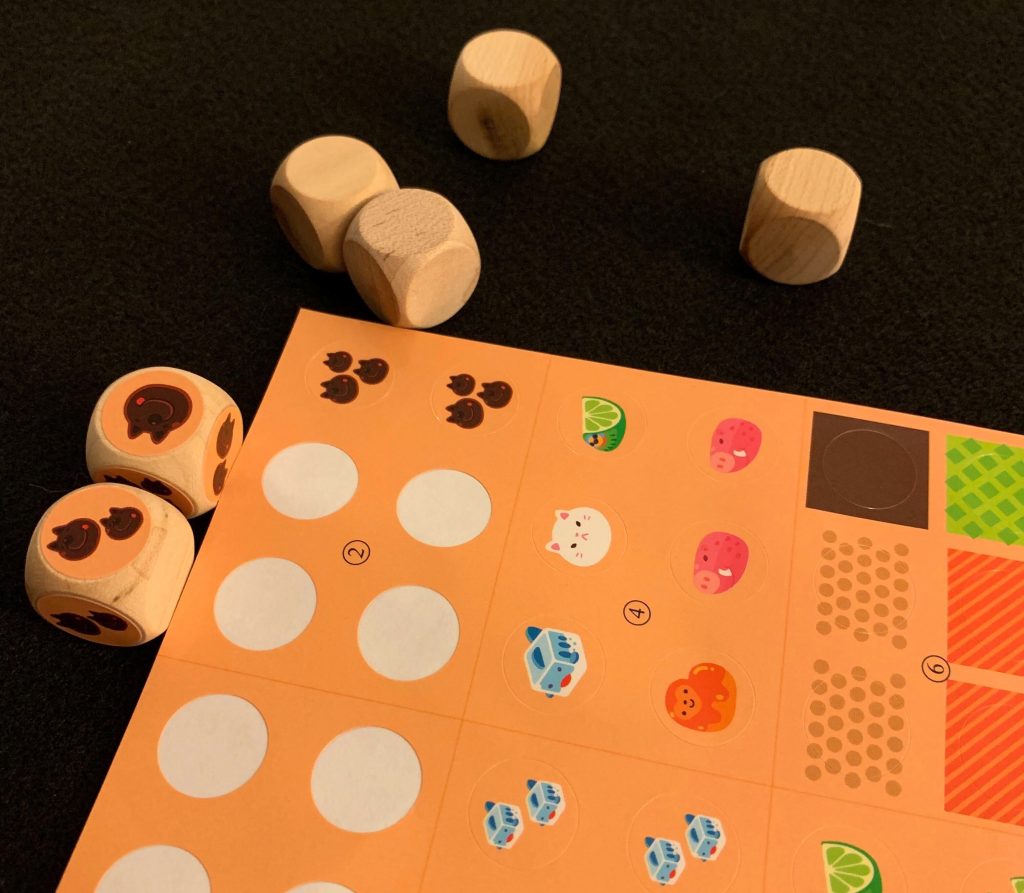 Looking past that, however, the puzzle Bubble Tea provides is enjoyable. It asks players to think in three dimensions, considering both how the cards are laid out on the table and also on each other. There are almost always symbols that need to be covered, so it matters which cards are on top of which. I’m not great at this game, but I still have fun playing.

This is a nice, light romp. I haven’t cared for every Aza Chen game, but Bubble Tea is fun, and it’s definitely worth a try.

Bubble Tea is a nice, quick puzzle game. Of all the Aza Chen designs I have played, it’s one of my favorites.