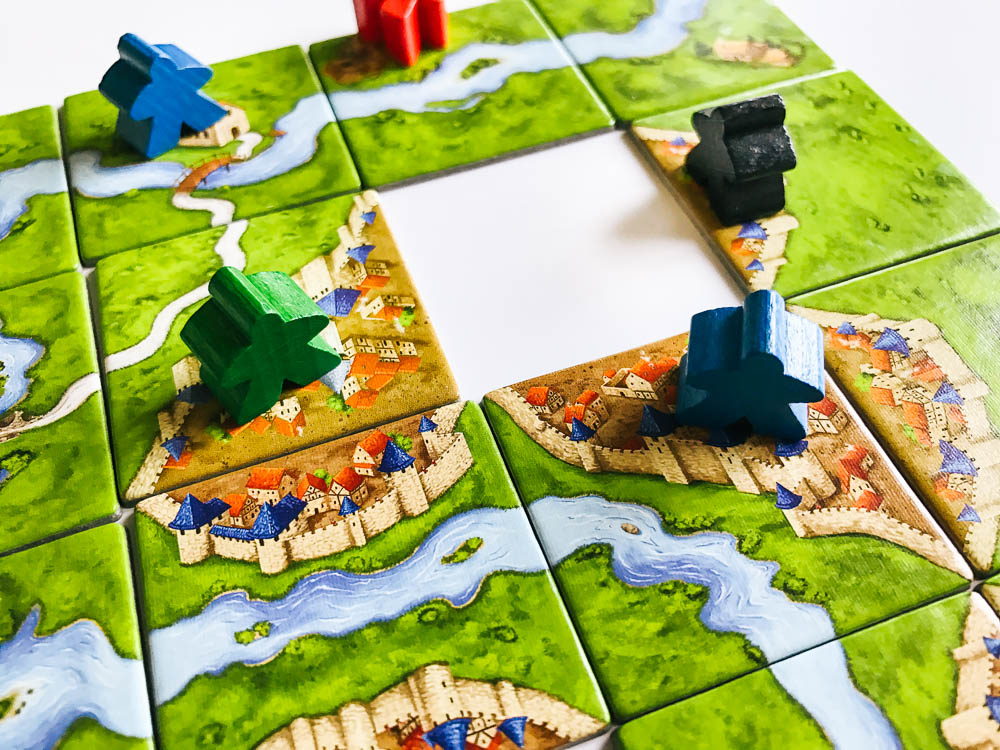 Carcassonne was originally published in 2000 through Hans im Glück Verlags-GmbH in Germany, and Rio Grande until 2012. Z-Man Games purchased publishing rights, and carries the license to this day. It won the Spiel des Jahres in 2001.

Carcassonne has a history of longevity and prestige, making it a Catan caliber game, as far as popularity goes. Spawning many, many expansions, Carcassonne has also become available on mobile devices, consoles, and PCs. 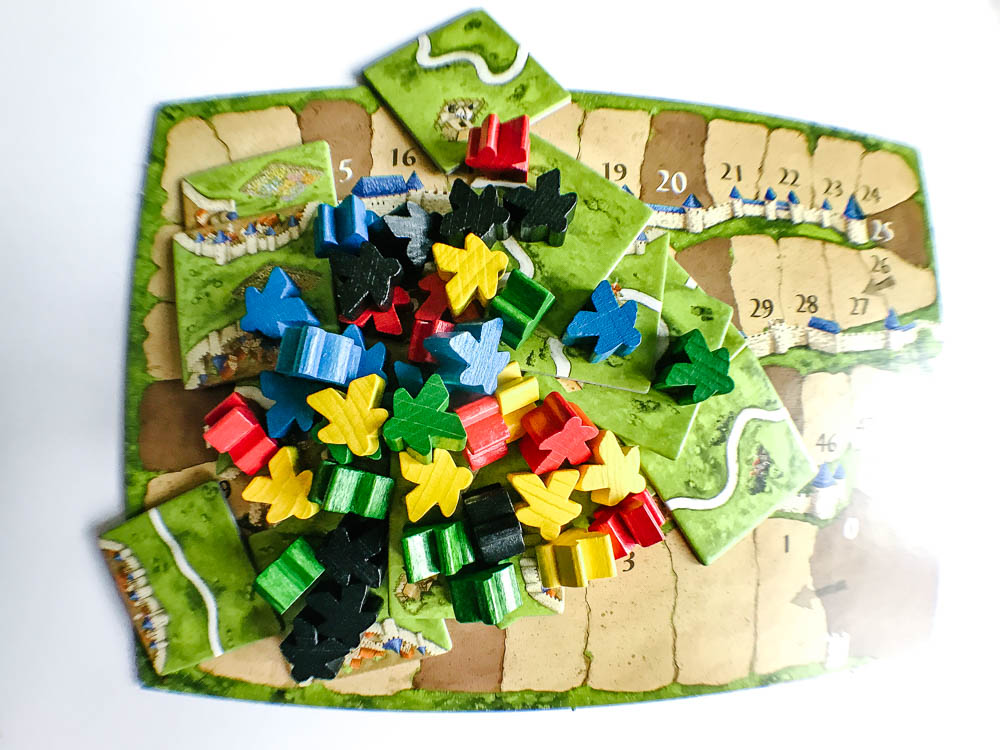 Carcassonne is probably the least offensive, least politically-charged game I can think of. There are some monasteries. 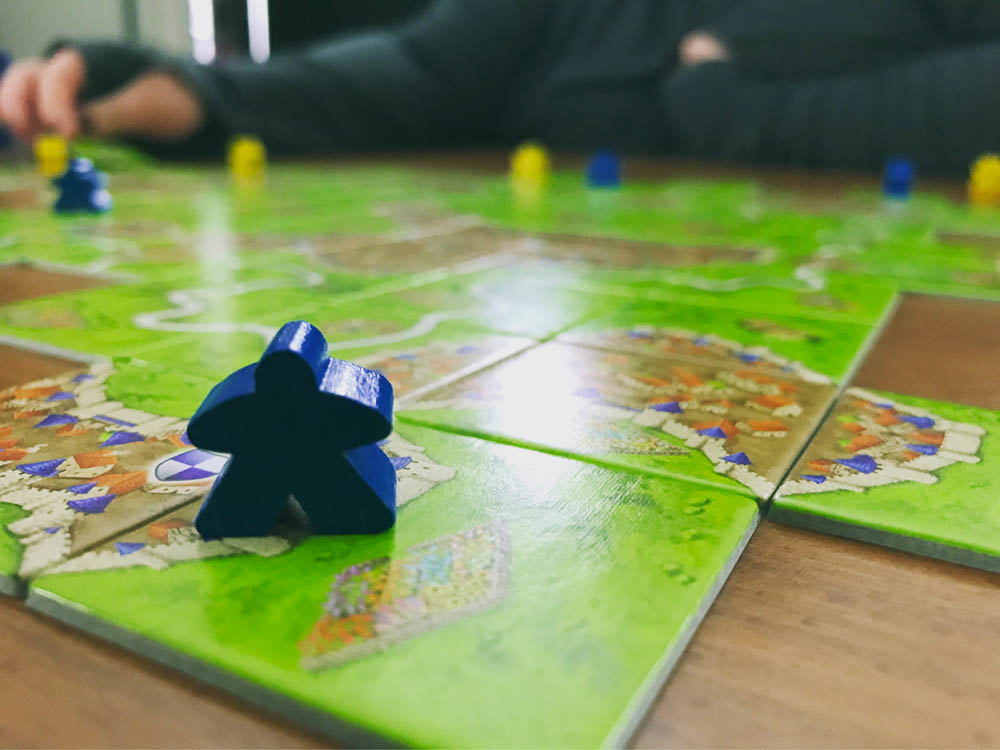 In my wee days of early gaming, I had somewhat begrudgingly sat with friends at a table, mindlessly planting roads between resources in Catan. I thought board games were designed to make me angry at my college buddies for blocking me from good die rolls. 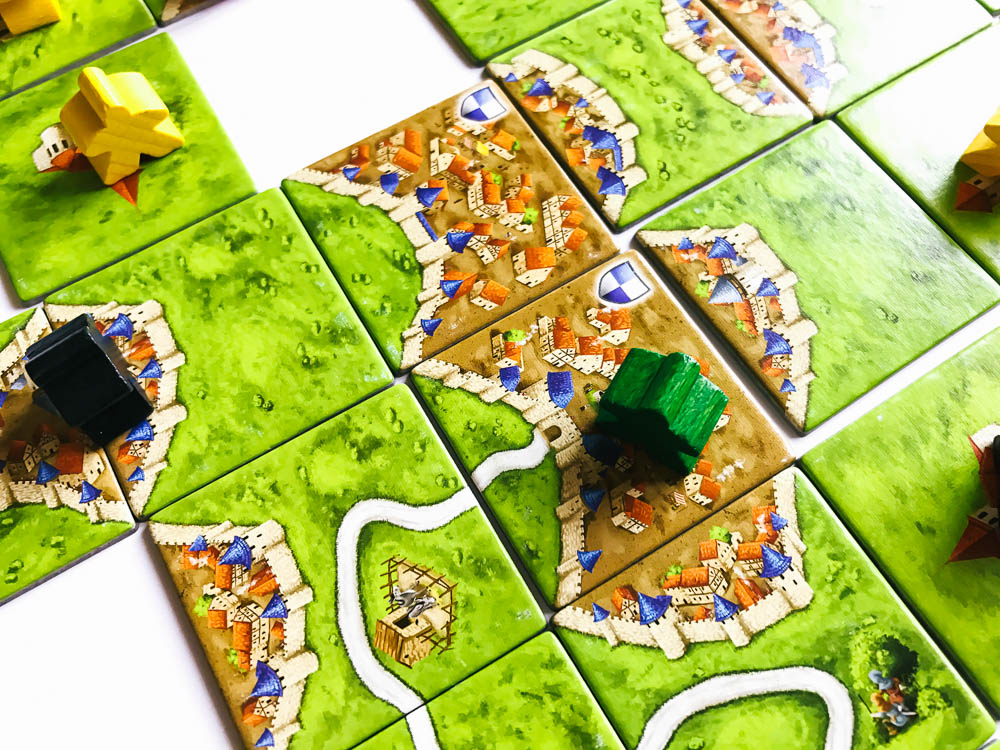 A lone green meeple takes charge of a city.

Then I discovered 7 Wonders. Ah, now I can build a civilization! Each age would become more fruitful than the last, gaining a score of resources I’d spent precious cards on. This was an engine! I was building something fantastic, and it gave me similar feelings to developing a people group, like in Sid Meier’s: Civilization III or IV.

Finally, a few years later, I played a brief two-player game of a small, tile-laying game called Carcassonne. I had heard friends talk about it, but the artwork was made up of grass, water, and dusty roads. How utterly uninteresting. I didn’t understand the game, and I didn’t care for such a boring waste of cardboard.

Of course, the next few years included introductions to titles like: Twilight Struggle, Mansions of Madness, Race for the Galaxy, Shadows Over Camelot, and Codenames. I had joined the board gaming elite. I looked at pitiful families, coming together over a holiday game of Monopoly. I scoffed at the uninitiated who enjoyed Uno and Phase 10. Worst of all, I couldn’t take a “gamer” seriously if their favorites were Catan… or Carcassonne. “Beginner games,” I mumbled to myself. 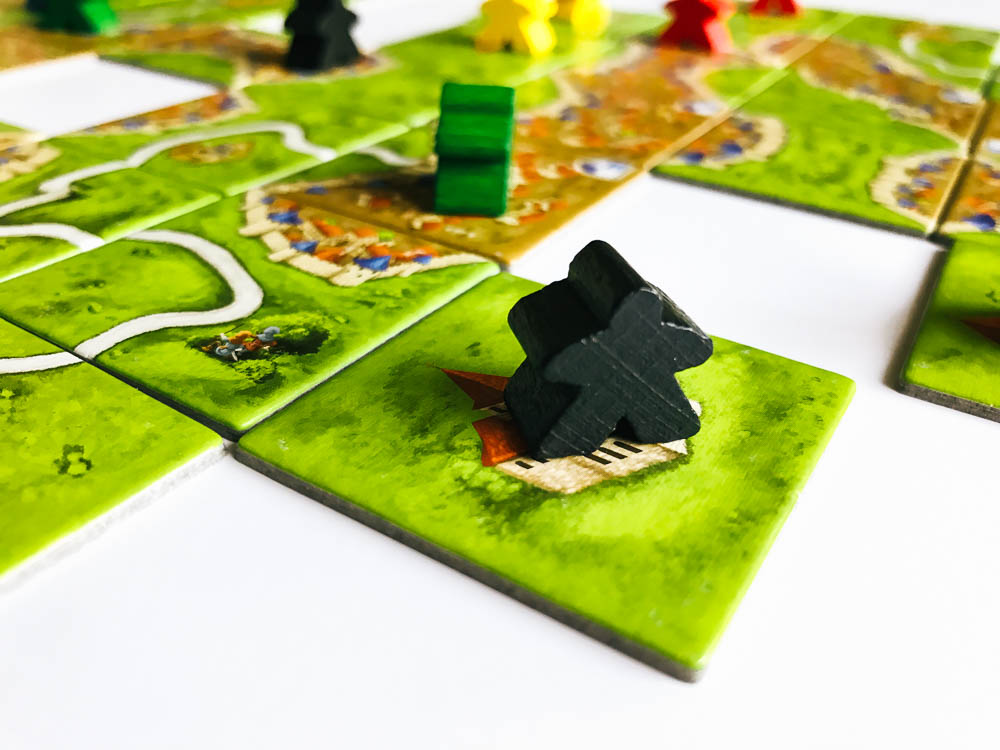 This meeple controls a monastery.

I’d like to think I’ve been humbled since then. I also hope I’ve not offended any friends or acquaintances by excluding myself from “plebeians” and verbally calling myself an elitist. No, while the Transformers franchise is proof popularity doesn’t make something worthwhile, Catan and Monopoly are examples of beautiful ignorance. Is it bad you like these games? Not at all. In fact, to fondly reminisce on your annual family game of Monopoly is a wonderful thing. To dwell on how to adjust your strategies in order to finally take the longest road from Eric on your weekly Catan meet-up is charming.

The first person shooter genre owes insurmountable credit to the innovations of shields and storyline to Bungie with the release of Halo: Combat Evolved. Likewise, the tabletop industry owes identical praise to those games responsible for bringing new masses to their dining room tables to play the classics, read: Catan, and Carcassonne.

Perhaps another time to discuss merits of settling the distant land of Catan. Today we discuss the fanciful, French plains of Carcassonne.

Those familiar with the game will tell you all you need to know. “Basically, you are working with other players to make roads and build cities,” one might say. Another chimes in, “Okay, but you aren’t really working together though, because you want to steal the cities, and you also want to be careful because you can accidentally give away free points.” The rebuttal, “But you might be working together with one other player because you can both get a lot of points if you share a road or a city.” I would reply, “Okay, but you don’t want to give other players points. You want to end up on top.” 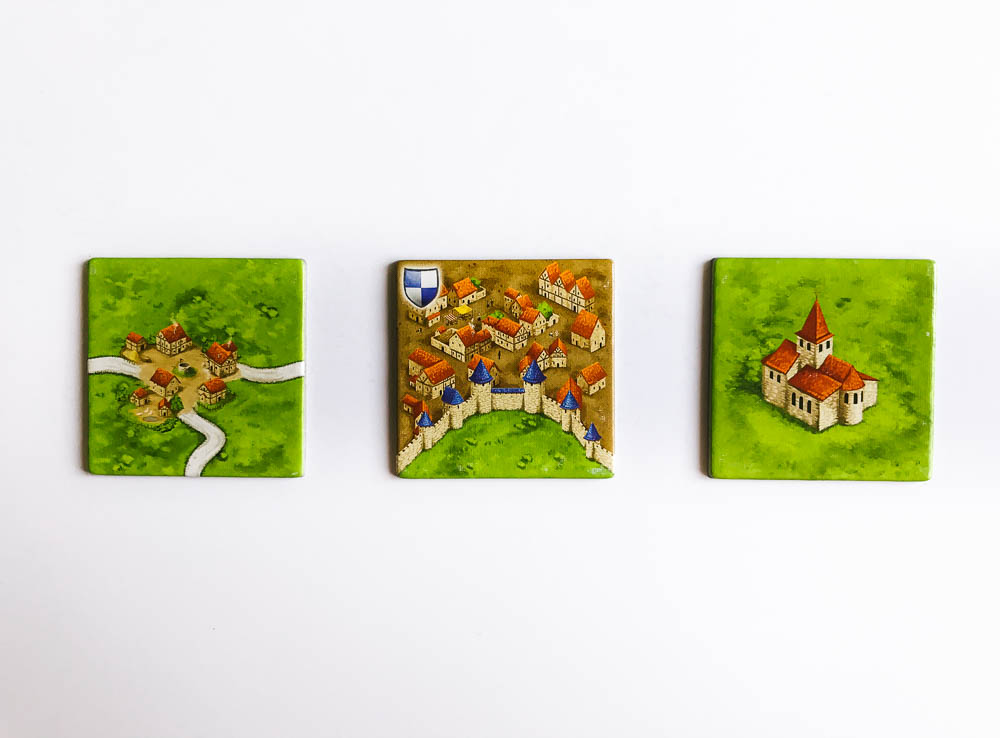 Three different features for meeple to place upon. Of course, you can also control fields.

Sizing up tall stacks of face-down tiles, or mangling a messy mound of the same, a player will draw one of these identically-backed cardboard squares and place it accordingly on the player-created landscape. Each tile features any strange combination of cities, roads, grass, and monasteries. Players must match their drawn feature to a location adjacent to an already placed tile.

Now comes the tactical meat of Carcassonne: the where, why, and when of meeple placement.

Carcassonne might be the first game to popularize the all-familiar wooden meeple. Likely the most iconic symbol of tabletop gaming, the meeple is also key to maximizing points and securing victory. Each player is fit with seven follower meeples and must carefully decide how to dispense them, considering it will take time and work to get them back.

After placing a tile, a player may choose to drop a meeple onto an uncontrolled road, city, monastery, or grass. This turns the meeple into a highwayman, knight, monk, or farmer, respectively. By doing this, the controlling player now owns the feature and all connected features of the same type.

Once a player has placed a tile, and debated on dropping a meeple, they finish their turn by checking to see if they’ve completed a feature, and score points accordingly. This simply means closing all walls on a city, connecting a road from one village to the next, or completely surrounding a monastery. By doing this, a player may return all meeples from the feature to their general supply.

Here, three players will likely share the spoils of the same city.

Each feature is worth varying points, depending on whether they are completed during the game, or automatically scored at the end of the game. In most cases, you want to complete features before the games (i.e. when the final tile is placed). If completed during the game, each city tile is worth two points, and if it bears a shield icon, it’s worth another two. Roads are worth a single point per tile, and monasteries increase in value as they are surrounded by other tiles. Farmers pay three points per completed city in a field.

While one cannot place a meeple onto a feature another meeple already possesses, there are other methods to sneak one’s way and usurp control of a high point payout.

A player can place tiles close to the offending city/road/etc. and drop a meeple onto that feature, in hopes to eventually connect the two. This serves a vile purpose, which is to force the opponent to share the points from their feature. Even worse, if a player can manage to break a tie and control more meeples on a feature than their opponent, only that player will get points, and the lesser player gains nothing.

This plays out in exciting fashion as multiple players vie for control of ever-increasing-in-size cities, with many shields intact. Just when you draw the second-to-last tile needed to close it off, another player drops a tile, adds a meeple, and continues the long feud over the city. This also happens with farmers, and sometimes roads, but to a lesser extent. 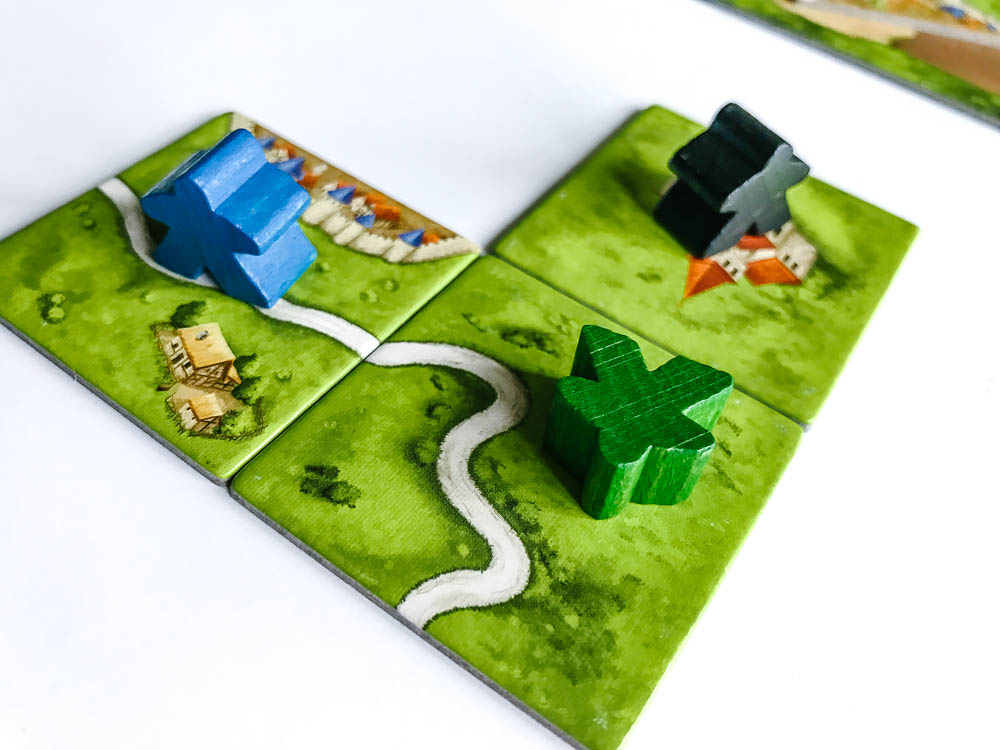 Of course, players also need to place monasteries tactically, as the base game monasteries are surrounded by fields, requiring very specific situations to maximize point value. You must take care when building around monasteries controlled by other players, because each adjacent tile gives them another point.

Carcassonne offers a multitude of situational tactics, and because of its simplicity, excels on all fronts. You can learn intricacies of player interaction and point values, all through easy-to-learn tile placement.

Some will call tile drawing random. By definition, I agree. However, the expanding board allows for many options when it comes to deciding where your tile should be optimally placed, as well as deciding if your meeple belongs on that tile. The ability to mitigate randomness is a huge draw for Carcassonne.

Playing beautifully as a duel, Carcassonne also expands to five players, doing so easily. Some more competitive types might prefer you not to, but while the player ahead of you takes their turn, you can draw the tile for your turn. This gives you time to think about where to play your tile, which in turn gives the player after you the chance to think of their play in advance as well. What I’m saying is Carcassonne has a great sense for pacing, and downtime is very short. Players will be cautiously eyeing the board, watching for other’s moves, and contemplating steals and adding additional meeples to guarantee control of their precious city. 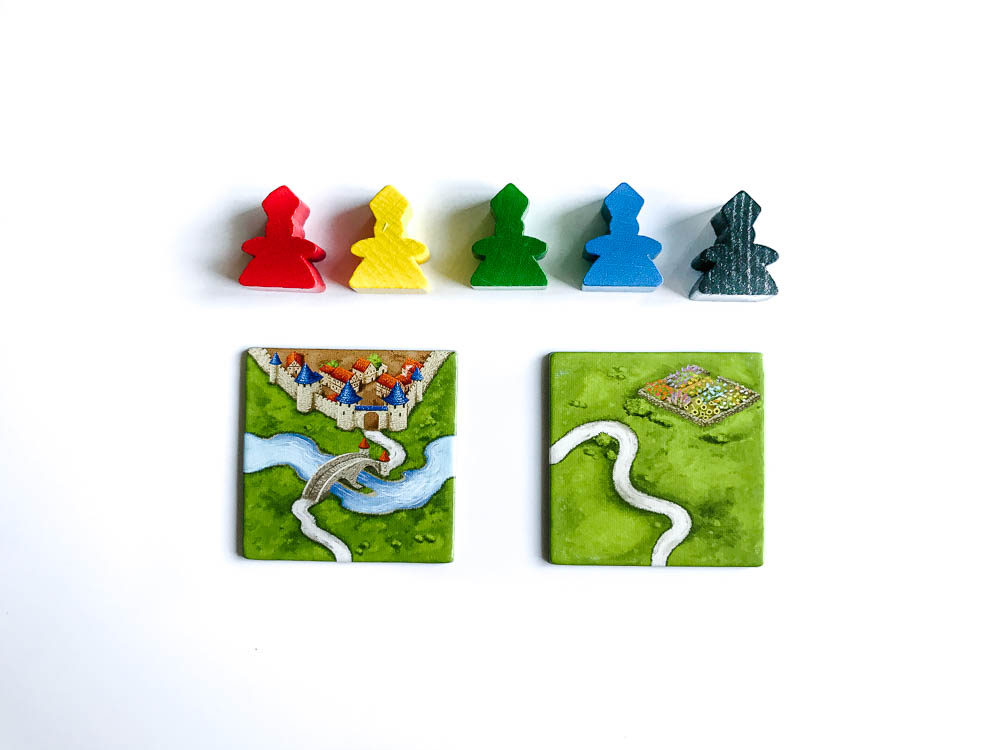 Abbots above, river bottom left, and a garden bottom right.

The wooden meeples are simple and original. Fantasy towers give no sense of direction as they jut forward in erratic fashion, all decided by players caring little for the landscape, but hugely for their fat sack of points. A handy scoring board lays close-by for point management. If only it included 50+ and 100+ chits to keep track of dominating players. Really, the artwork and components are simply fine. They don’t stand out, and they aren’t incredible. Tiles for this newer edition of the game sport the original tile backing, but also feature gardens, shacks of animals, little villages, and other things.

This edition of the game ships with mini expansions, including river tiles, abbot meeples, and use of the gardens. None of these are particularly standout, but they also take nothing from the game, only giving you more options. 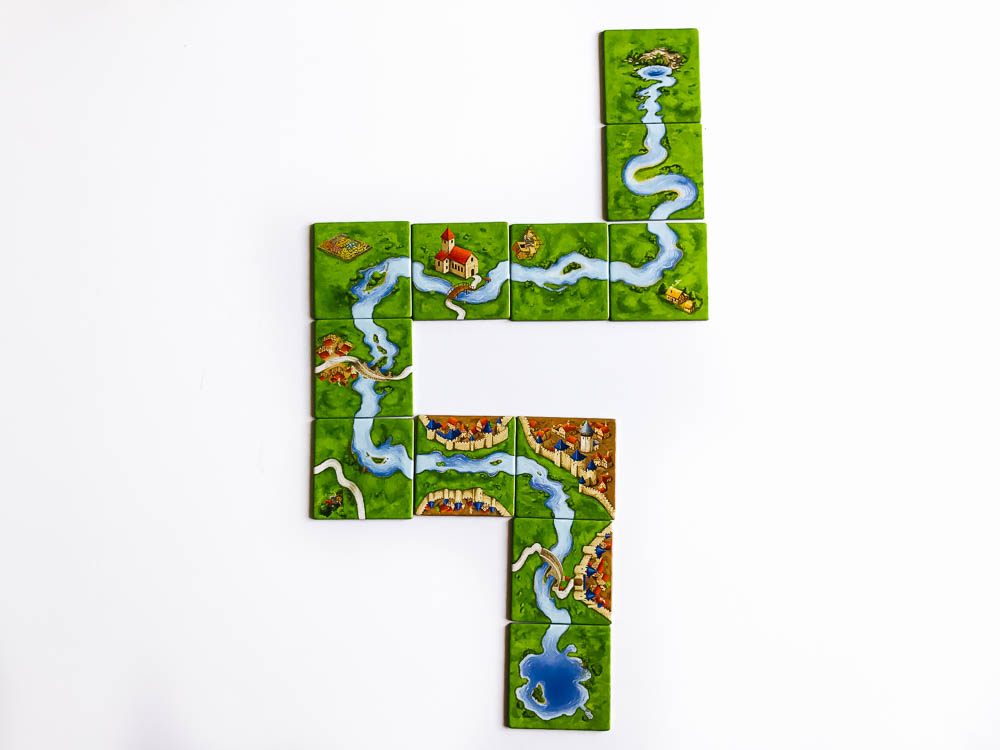 An example of a full river setup.

Abbot meeples, alongside regular meeples, can be placed on gardens or monasteries, with gardens scoring in identical fashion to monasteries. The advantage of the abbot isn’t only an extra follower. If a player chooses not to place a meeple on their turn, they can instead pick up their placed abbot, returning him to their supply, and gaining points as usual. This adds an interesting layer of meeple management and allows for more situational plays.

Being about as simple as they come, Carcassonne is an excellent euro, but an even greater introductory game. Playing seven games with my wife within two days tells me quite a bit. In fact, she wanted us to use our date budget for the month to buy all available expansions for the game. One might cry on how expensive of a venture this could be, but we were able to purchase Inns and Cathedrals, Traders and Builders, and The Princess & the Dragon. All for just over $33 through Miniature Market. The base game lies at a measly $26 or so on Amazon, and goes on sale for much cheaper occasionally.

With my elitist bias on the mend, Carcassonne is almost an essential purchase for most gaming collections. Though tile-laying might feel different and modern with something like Isle of Skye, Carcassonne stands the test of time, and should continue to sell for many years to come. 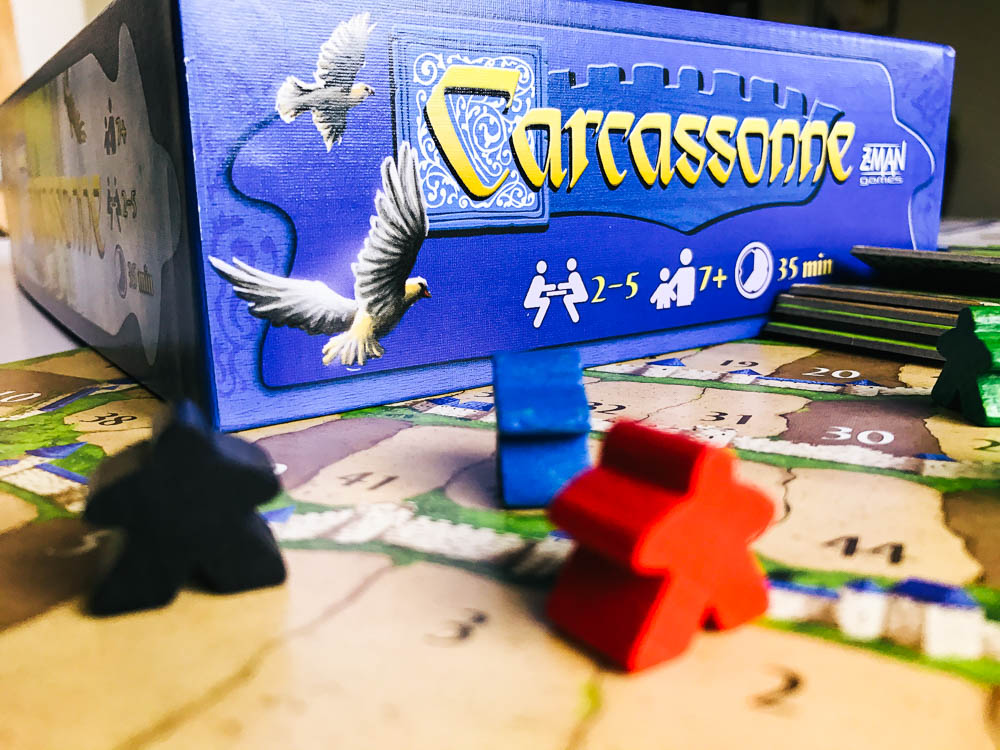 Carcassonne plays fast, teaches quickly, and offers tons of re-playability and strategy. With an extra low entry fee, players will find hours and hours of fun at all player counts.