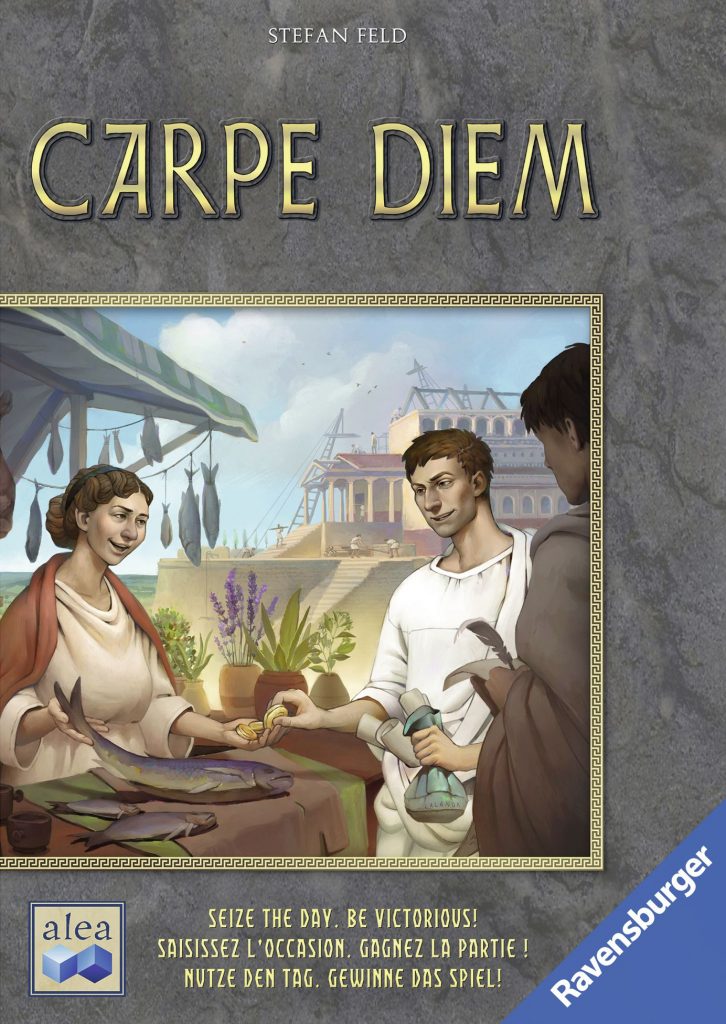 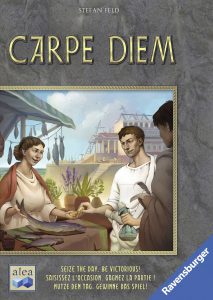 A key indicator that a board game designer has “made it” within the hobby is that their last name becomes recognizable. In the case of (Stefan) Feld, his last name has practically become a genre in and of itself; other games seek to have “Feldian” qualities, whatever those are.

If I were to try and define what makes a game “Feldian,” it’s this: the game always seems to be centered around one brilliant, innovative mechanism, while the rest of the game — what the mechanism actually uses to do its thing, the theme, the artwork — all play second fiddle to that mechanism. In Carpe Diem, a new method for scoring every round is the key to everything. But what about the rest of it? Let’s find out! 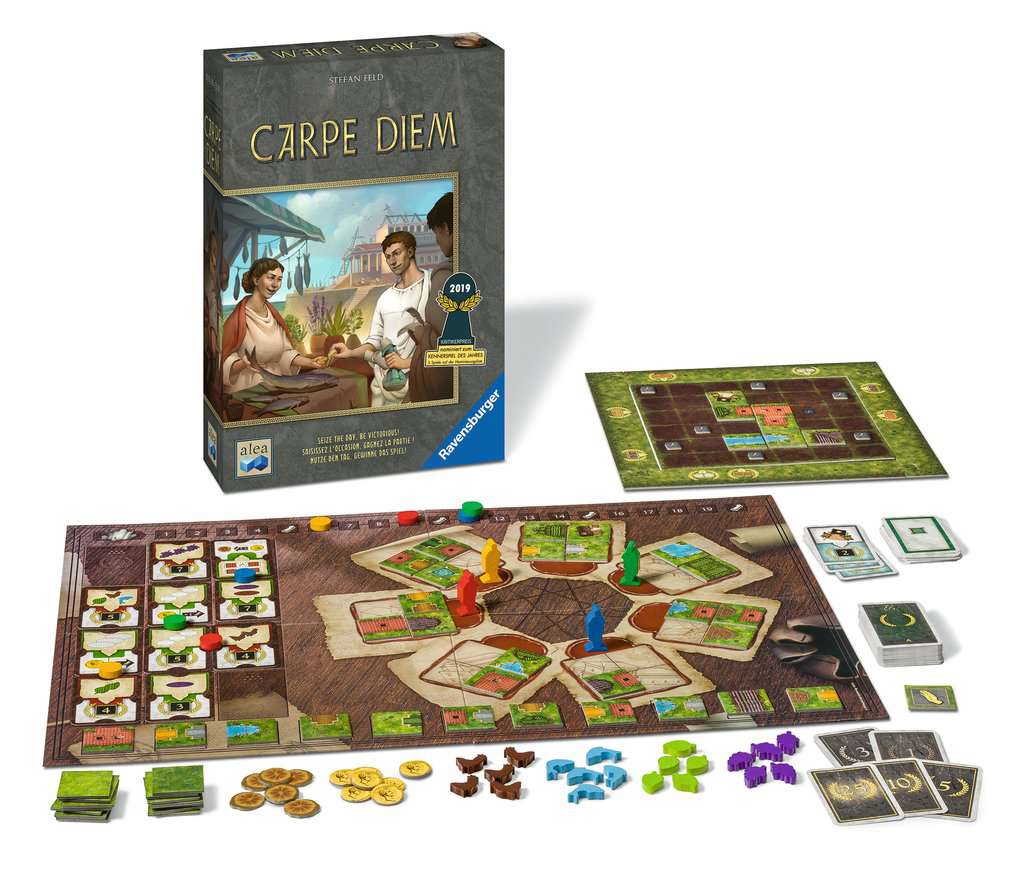 Carpe Diem is ostensibly tile-laying game, but that’s not really what the game is about. The tiles are a McGuffin, a system purely there to make the scoring mechanism work. So let me tell about the real meat of the game, first.

At the beginning of the game, several cards are laid out in a 4×3 grid, and each one shows a way to score points. At the end of each of four rounds, players place one disk between two cards — and only they score points that way. Once a disk is placed, that intersection spot — those two cards, at the same time — won’t be scored again, though each card can be scored using its other connections to adjacent cards. Furthermore, every player has to place a disk each round; if you place a disk in a spot whose scoring requirement you cannot meet, not only do you fail to gain points, you lose four points!

This scoring mechanism is amazing. It succeeds on so many different levels. It’s so simple and so easily understood, yet requires so much advance planning and strategy. It is highly tense and interactive, in a game where players don’t do anything to each other directly. Even with only a small set of scoring cards, the importance of adjacency makes it incredibly variable. It is truly elegant.

This is actually something that drives me nuts about Feld games in general. When he comes up with a great mechanism to use — scoring cards, mancala, a cube tower — it never organically connects to everything else in the game, with one glorious exception (Castles of Burgundy). This is exactly what turns me off of the widely popular Trajan, for example. So, I was expected the same kind of aggravation from Carpe Diem. I was wrong.

The truth is, Carpe Diem suffers from the same “two ideas glommed together” problem of Trajan, Macao, Amerigo and so many other games. The surprise, however, is that the mechanisms here are so very good, and the game is so tense and fast and fun, that I really don’t care. If I were to try to analyze why, I think it’s this: even though Carpe Diem connects two disparate parts, they’re both extremely strong this time.

I’ve spent most of my time lauding the scoring mechanism, and deservedly so, but the tile-laying portion, McGuffin that it is, actually is pretty good. Players draft tiles from a central area, placing them on personal player boards, with its own set of rules and bonuses. Players can only draft from the next area to the left or right, no matter how far away that is; some tile depots will empty before others. (By the way, this is a huge improvement over the star-shaped board of the first edition – THANK YOU, alea!)

However, I think the most important job of the tile-laying portion is this: make it as clear as possible what players actually want to grab for the scoring cards, so that the scoring card mechanism can show its full potential. And that job is done extremely well. This is actually one way — maybe the most important way — in which the whole package does come together into a cohesive whole.

Let me just say it: I think Carpe Diem is the best strategy board game I played in 2019. Unfortunately however, while the artwork and components are fine, they do not show the game off as it deserves. Ravensburger/alea showed us with the anniversary edition of Castles of Burgundy that they can compete with Days of Wonder and other French companies and put out truly beautiful editions of games. It is my belief that if Carpe Diem looked as good as that new edition of Castles of Burgundy, then Carpe Diem would have won the Kennerspiel des Jahres over the mediocre-but-beautiful Wingspan. It is frustrating to see the better game lose over aesthetics, but I’m hoping to see alea continue to improve their artwork and components now that they’ve proven they can do it. Maybe we’ll see a five-year anniversary edition of Carpe Diem in 2023. One can hope, right?

So while the cover of Carpe Diem might not sell you on the game, let me sell you on it instead: this is right there next to Castles of Burgundy as Stefan Feld’s best game. If you enjoy medium-to-heavy Eurogames, you owe it to yourself to play this game.

Thank you to Ravensburger US for providing a review copy of Carpe Diem.

The best strategy board game I played in 2019, and one of Mr. Feld's best designs of his career.