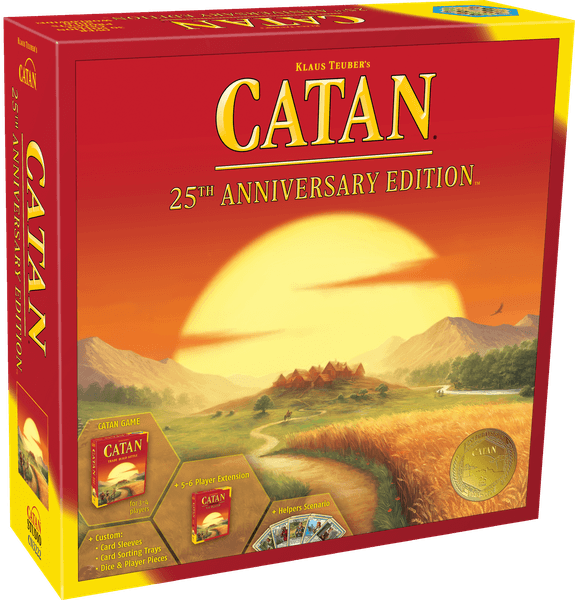 Catan is the definition of an evergreen tabletop game: ever since it hit the shelves, it’s been available. Most game stores have a dedicated section or shelf just for Catan base games and expansions, from Star Trek to Seafarers and even Game of Thrones. Now that the game has sold over 30 million copies (according to the box), they’re coming out with a 25th Anniversary Edition. So, is it worth it? 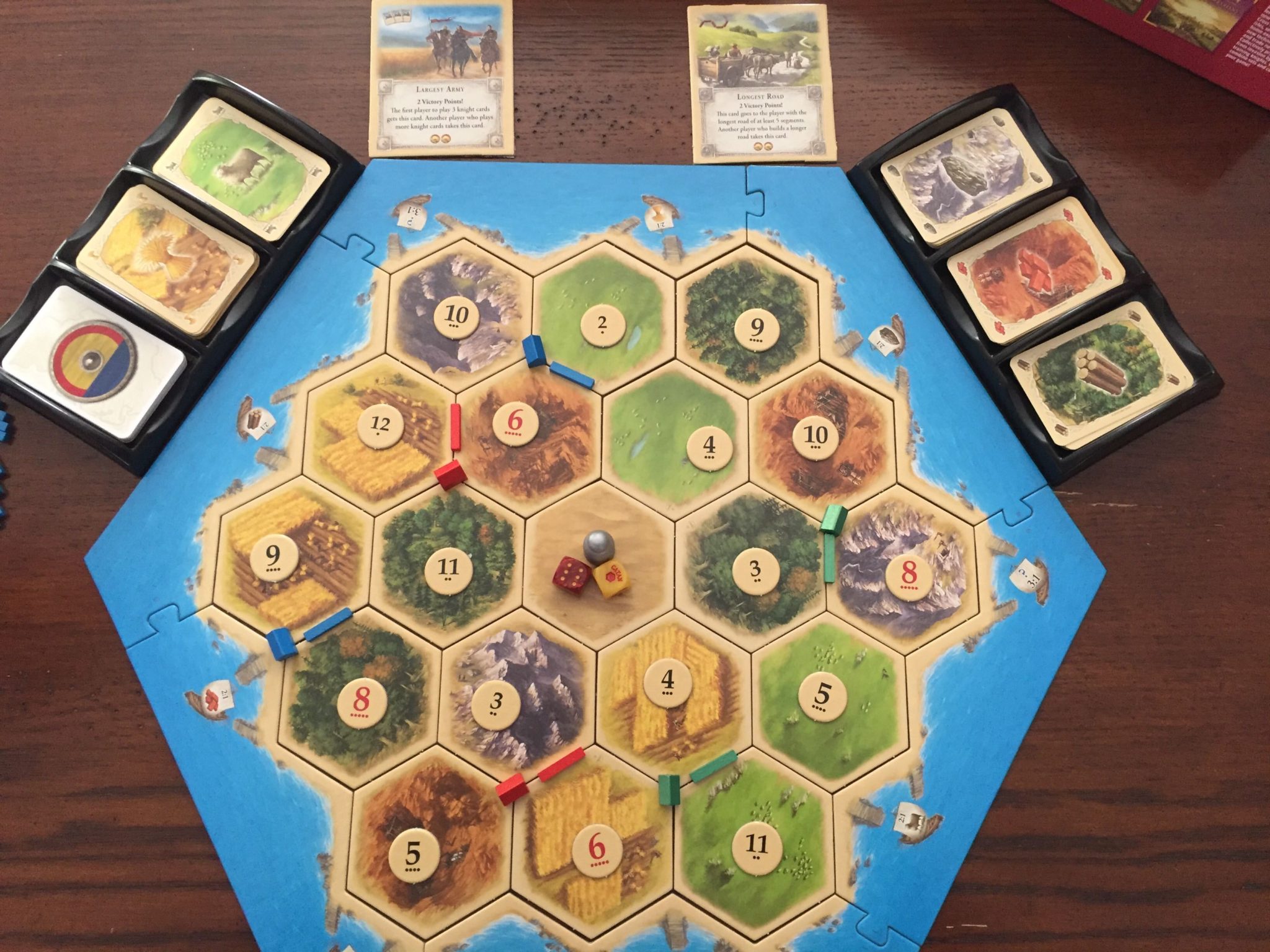 Catan 25th Anniversary Edition is an upgraded package that doesn’t touch the game play in any way. Players will still roll, receive resources, trade, and build until someone reaches 10 Victory points from some combination of Cites, Settlements, and Development Cards. What it does do is upgrade all of the art, components, and game assets down to the box insert itself. This edition will have a lot of appeal to either someone who is interested in Catan but has somehow avoided it so far, or Catan enthusiasts looking to upgrade their game to a nicer-looking version of the game. 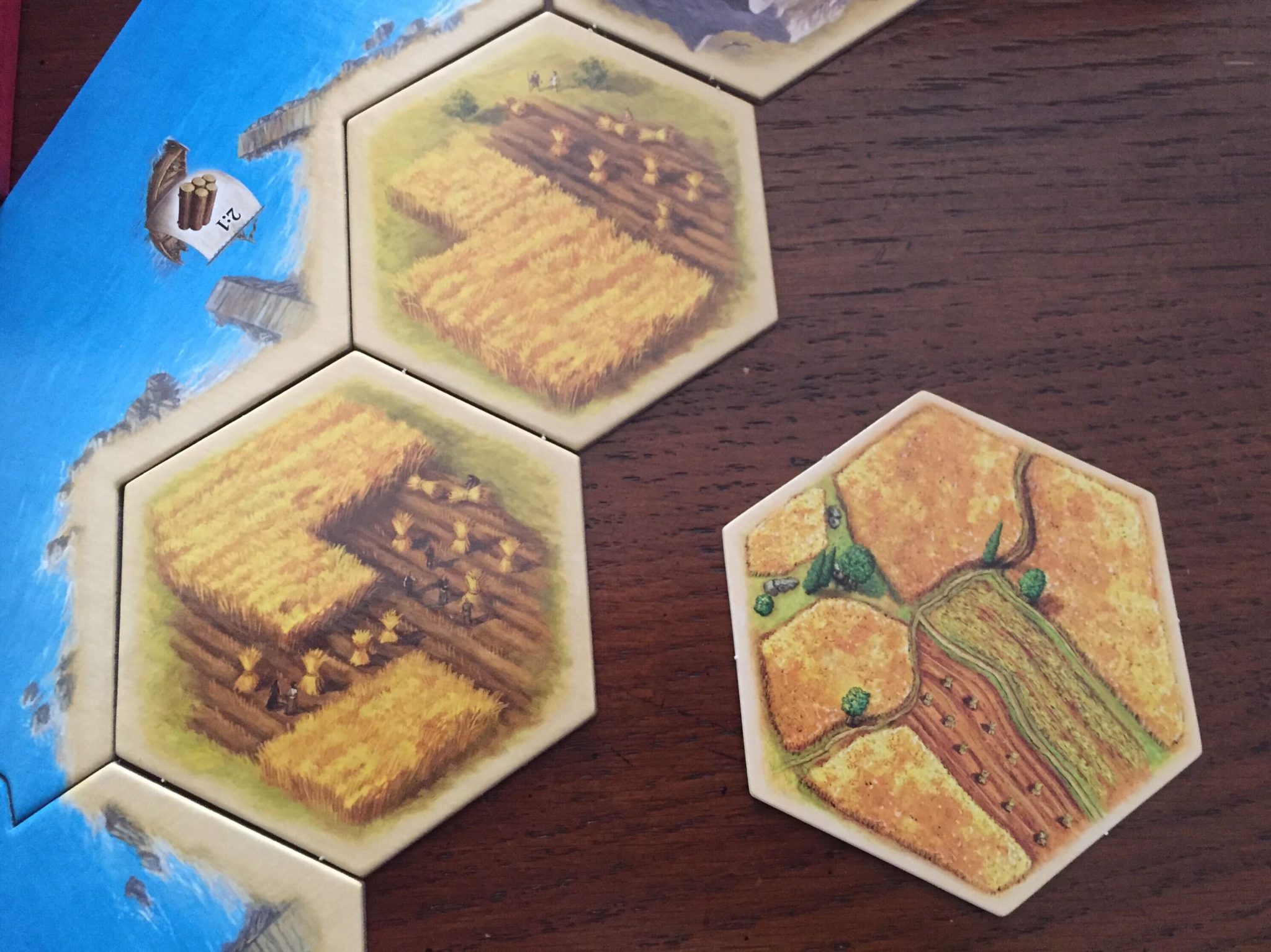 Right off the bat the most noticeable change is the art on the tiles; instead of flat impressionistic biomes the tiles now have tiny people harvesting different resources. They don’t look photo-realistic but it does look much improved, especially compared to the old tiles. It was a lot of fun just looking at each type and seeing the different variances even in just one resource type. 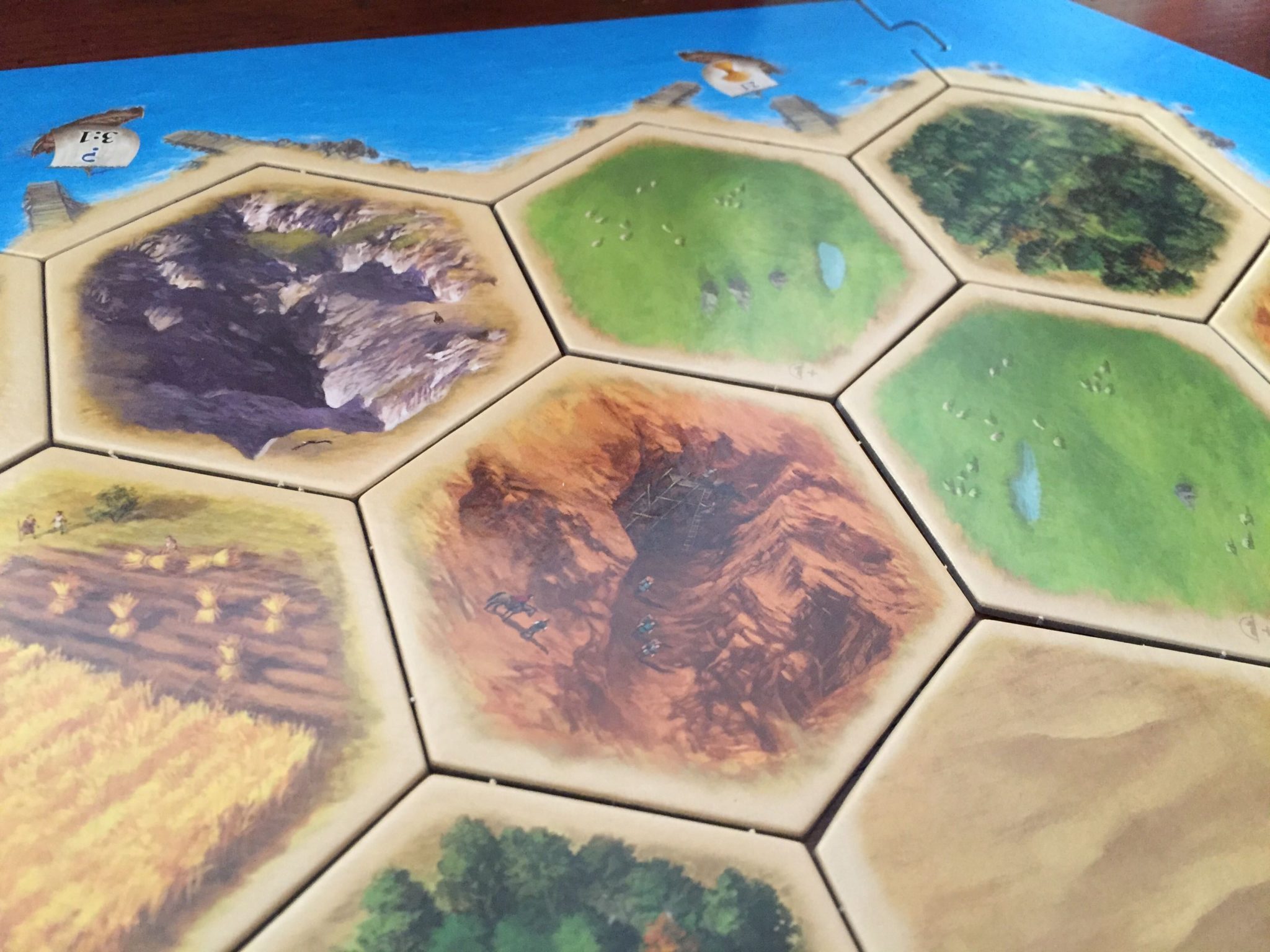 The new insert is a nice addition; especially the removeable card trays. Now the five resources and Development Cards can sit orderly in their trays until someone needs to draw, and it makes putting them away easier. There is also more than enough pockets and baggies provided to organize your game however you want. They even provide card sleeves so that anyone wanting to protect the game from player’s faux pas can rest easier. 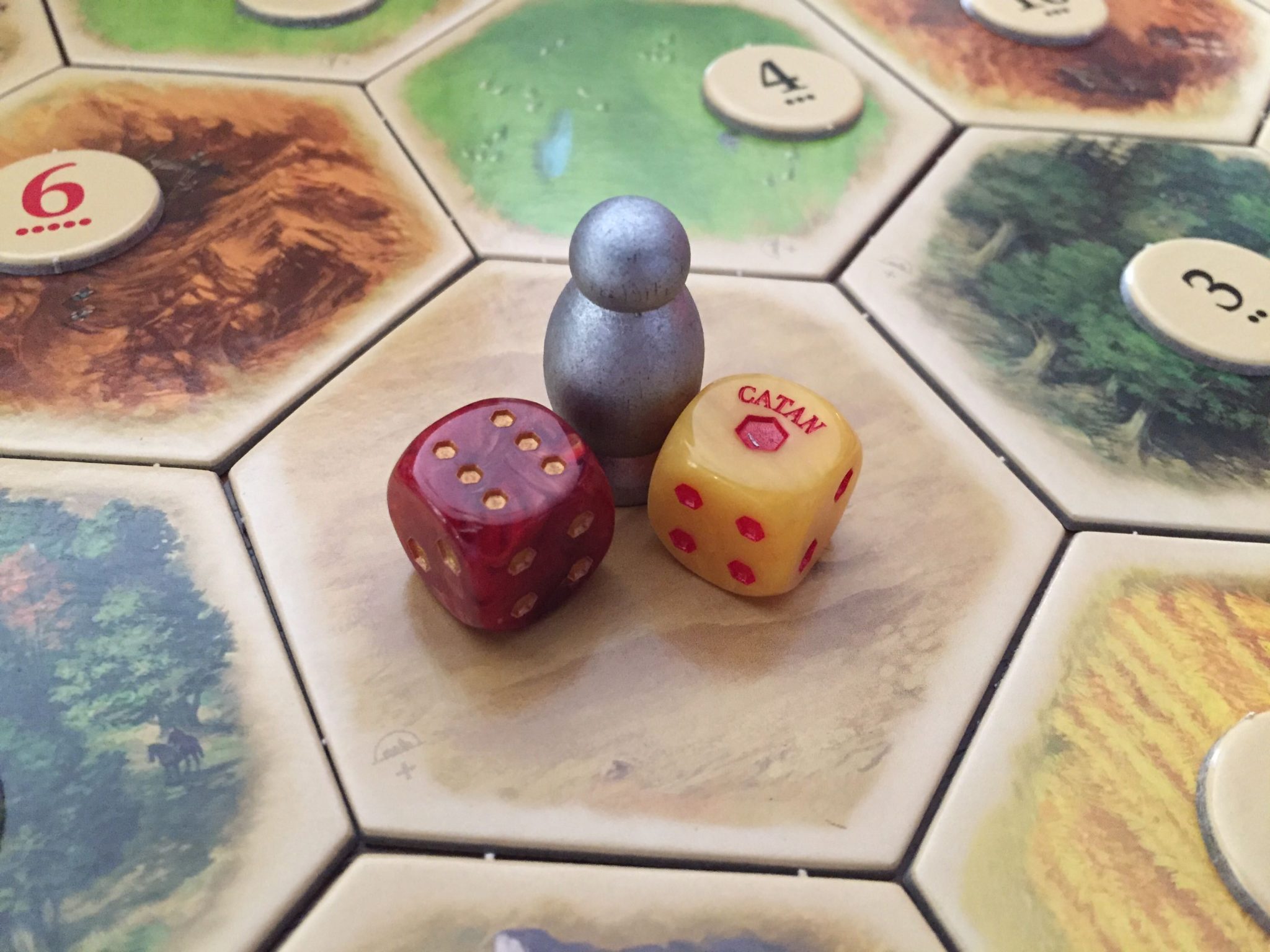 New Robber and Dice. The dice say “Catan” on the 1’s. The sparkly sheen on the wood components is most obvious on the robber.

Also included is the 5-6 player expansion and the Helpers scenario. The helpers are an interesting addition that will add a wrinkle for veteran players – each player gets a helper that they can use on their turn once or twice, before exchanging them for another one. Helpers’ abilities range from moving the robber to protection from 7’s to improved trade rates or forced trades with other players. They’re basically more powerful Development Cards. The 5-6 player expansion is a nice inclusion, but I’ve never had the need or want to play Catan with more than 4. Usually, games go well over the hour timeframe (the box says about 60 minutes) so I feel like 6 players could take up to two hours easily, even with the larger board and additional building phase. 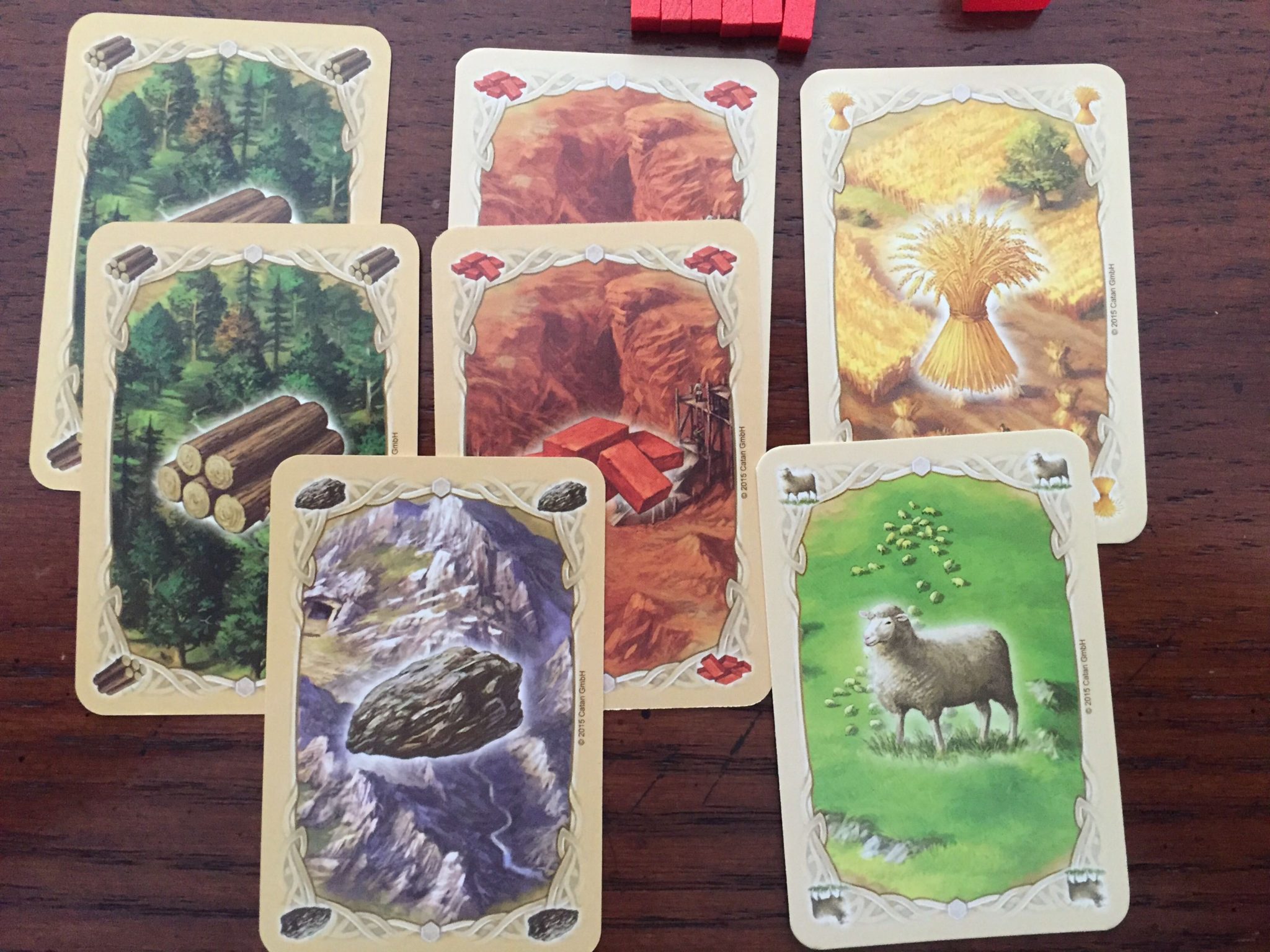 All in all, Catan 25th Anniversary Edition is a good collection for folks who either don’t own any Catan versions yet, or for gaming veterans who want to own a nicer-looking version that has a lot of bang for the buck in one box.  I still would not want to play Catan with 5 or 6, but the ability to do so will be an added bonus to some.

While Catan has earned its place as an Evergreen game, if it were published today, I don’t think it would be as well received as it was back in the day. The mechanic of “roll dice, get resources, build” has been done quite a bit, probably largely due to Catan and its success. The helpers will go a long way to assist anyone who feels like they’ve played this many times before, but they still don’t change the core gameplay. While it has a lot to offer for both Catan newbies and veterans alike, someone will still at some point ask, “Wood for sheep?”

All in all, Catan 25th Anniversary Edition is a good collection of gaming for folks who either don’t own any Catan versions yet, or gaming veterans who want to own the best-looking version that has a lot of bang for the buck in one box.