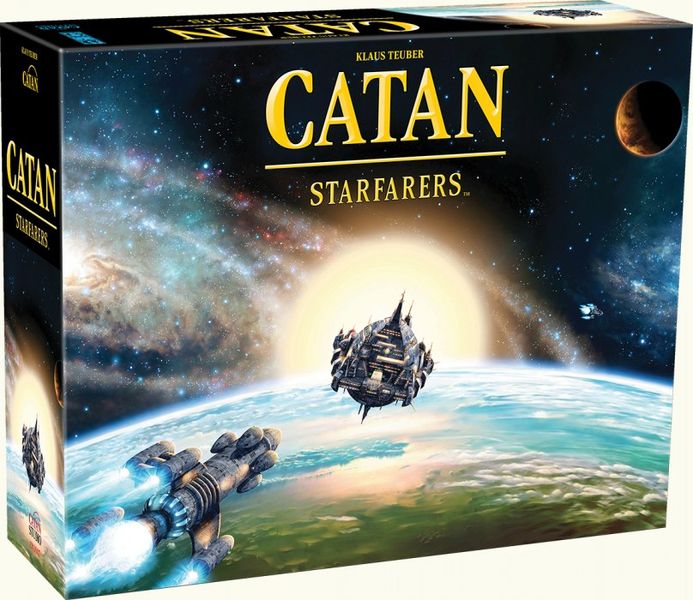 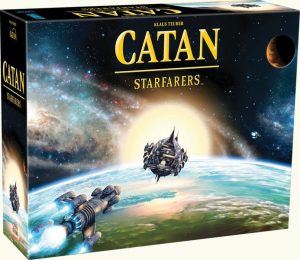 Catan: Starfarers is an updated reprint of the highly-regarded but long-out-of-print Starfarers of Catan. This game takes the classic Catan system and builds upon it, offering exploration, alien encounters, and incredibly cool plastic rocket ship pieces. It is a great game for anyone who has played Catan.

Love it or hate it, there’s no denying the towering influence of the Catan series. It is largely responsible for the explosive growth of modern tabletop gaming.

Many years ago, I was lucky enough to find the long-out-of-print Starfarers of Catan for a decent price, and I played a TON of it. Now, 20 years after its original release – an eternity in hobby gaming terms – what has become a “grail game” for many is back with a shiny, updated version. 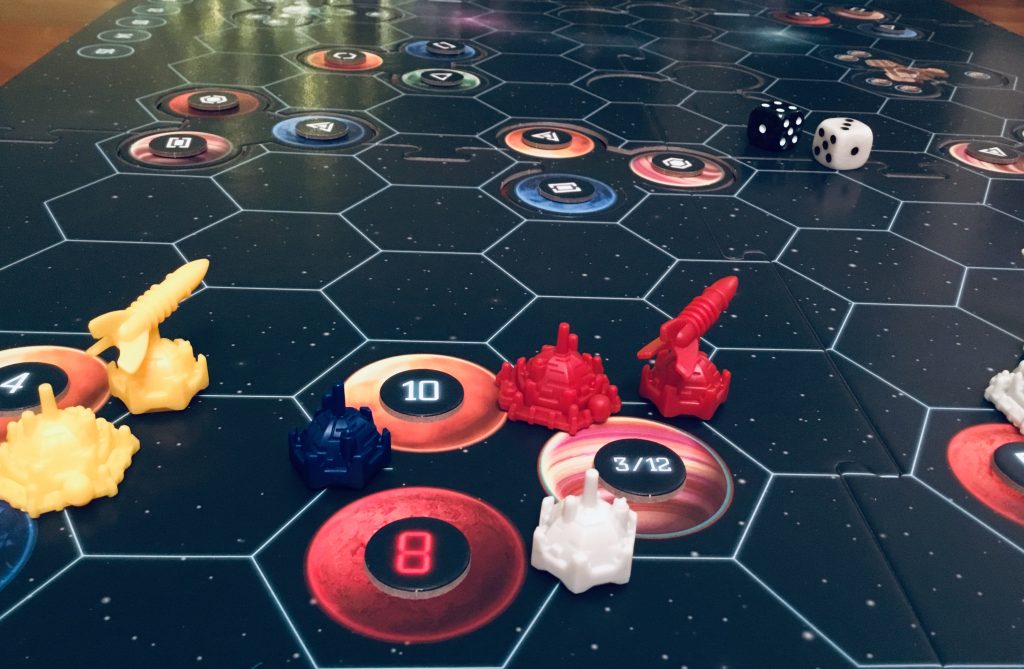 Catan: Starfarers builds on the series’ basic game system, so for the sake of this review, I’m assuming the reader is familiar with the original. The core framework of Starfarers remains the same as any Catan game: players collect different types of resources, trade them with opponents, and use them to develop a network of colonies in a race for victory points. In addition to this, however, it offers a ton more content (and chrome) that makes it stand out from the rest of the series.

First, Starfarers includes an exploration aspect. Players begin at the edge of the board, on the “Catanian Colonies” (basically, planets that have been explored/settled). The rest of the board represents deep space, with planets ripe for discovery. Throughout the game, players build and pilot rockets to explore these unknown sectors. The numbered production tokens outside the colonies begin face-down, meaning players won’t know how “good” a planetary system is until they reach it. 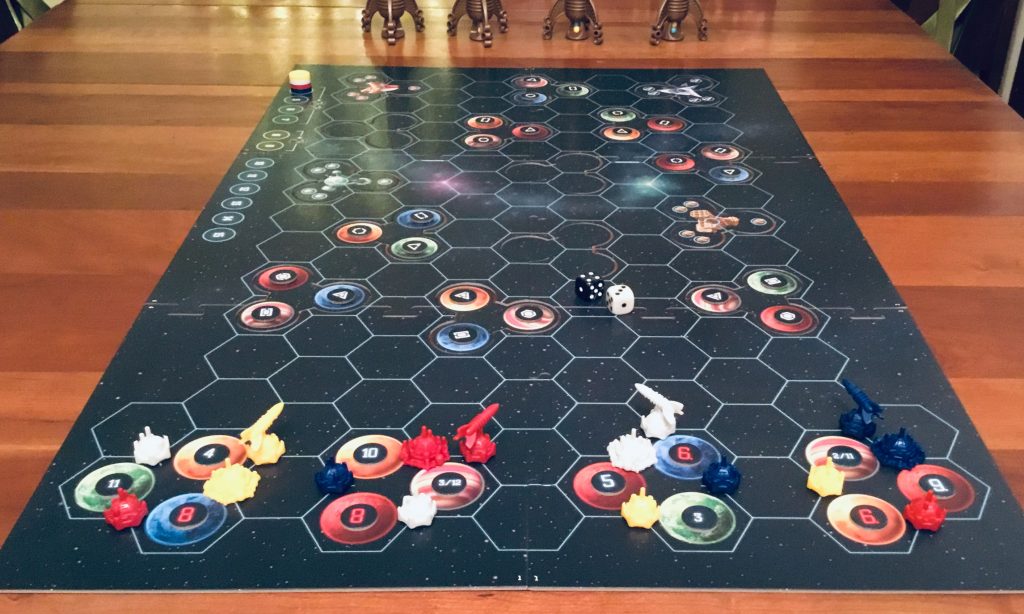 Each player also has a giant, plastic rocket ship that represents the smaller ones on the board. During the game, players can upgrade and customize their rockets, adding boosters to make them faster, cannons to make them stronger, and freight pods to increase their transport capabilities. 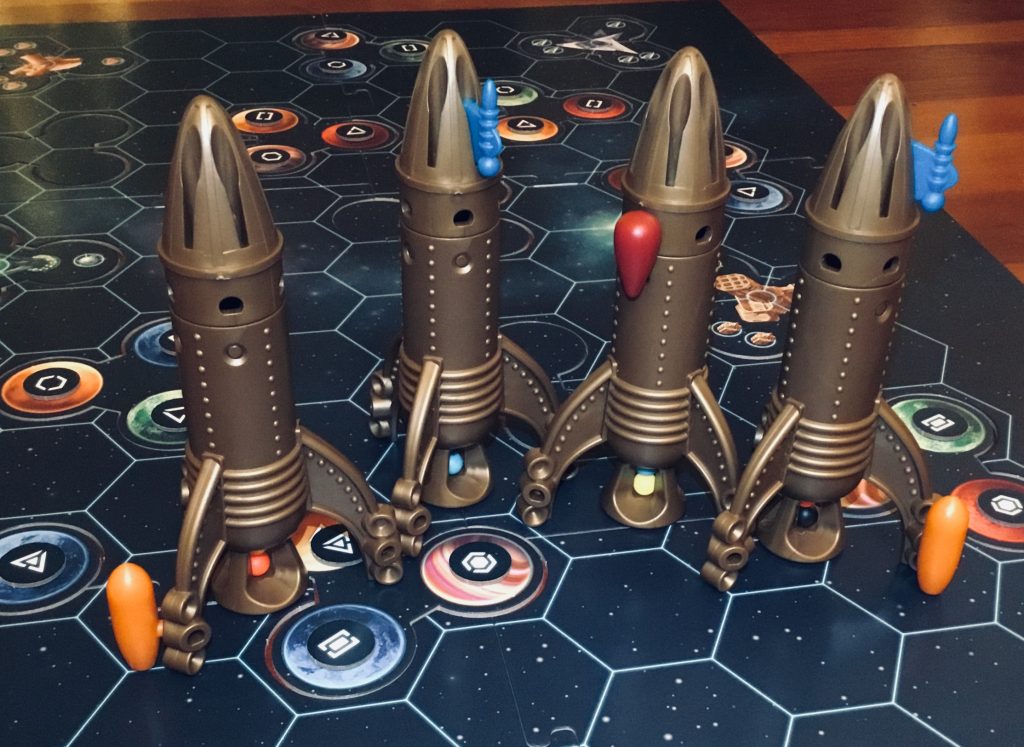 As they explore the board, players may come upon ice planets, space pirates, or alien outposts. This leads into another aspect that makes Starfarers interesting: encounters. The large rockets have a number of colored balls inside them, and whenever a player wishes to move on the board, she “rolls” her rocket by shaking it, causing 2 balls to fall into the engine cone.

The red, blue, and yellow balls are used to determine how fast players’ ships can move each turn. A blue ball provides 1 speed, a yellow provides 2, and a red provides 3. If a black ball falls, however, it signals an encounter. When this happens,  a neighboring player draws and reads aloud the top card of the encounter deck. Normally, encounters give the current player a choice, such as:

Depending upon the player’s decision, the outcome may be good or bad, and it’s not always obvious which it will be. For example, taking a “friendly” action might backfire! (It’s the unexplored depths of space, what did you expect?) Additionally, when players establish trade stations at alien outposts, they earn “friendship cards,” which provide helpful bonuses going forward.

Like any Catan game, the winner is the first player to reach a set number of points, in this case 15. There are more nuances to the game than I have covered here, but hopefully, this gives some indication of the things Starfarers offers, that other Catan games might not. 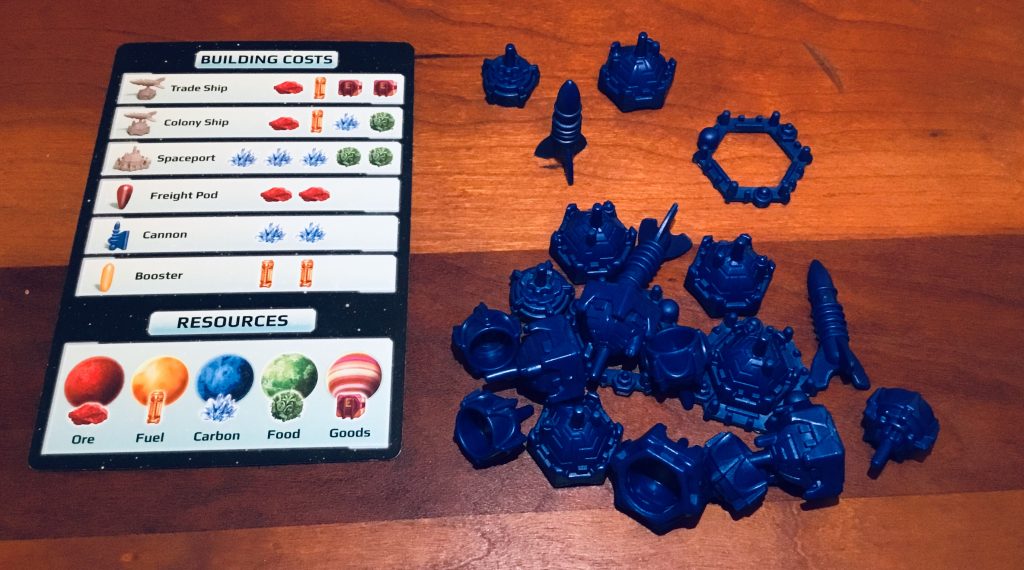 I certainly have not played every iteration of Catan, but of the multiple versions I have played, Starfarers is my favorite, far and away (and it has been for years). The original Catan is fine, but it is definitely starting to show its age. I like Starfarers because it provides a variety of features that go beyond just “wood for wheat?,” like exploration and encounters. Additionally, this new version provides some updated mechanisms which really enhance the game. For example: 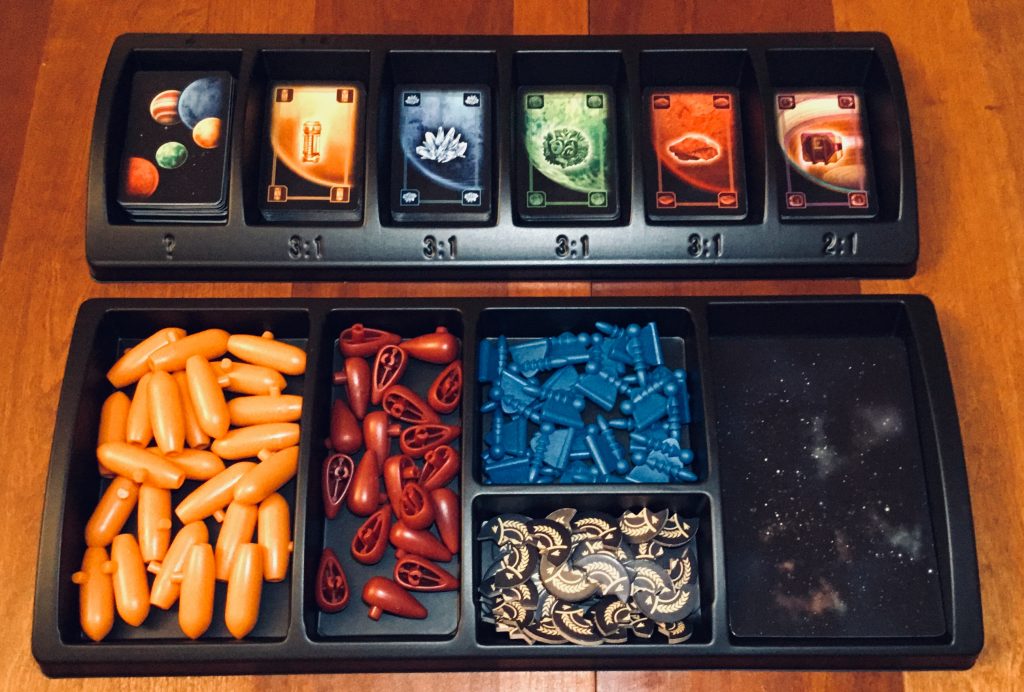 All in all, the experience is just way more dynamic than traditional Catan. Again, I like that game just fine, but I LOVE this one. The presentation in Starfarers is top-notch. (Also, having played both versions, I am happy to report that the redesigned rocket ships are much sturdier and not prone to breakage like the old ones.)

I would recommend this game to anyone who has played Catan, whether they enjoyed it or not. Fans of the series should have fun with Starfarers because it maintains the classic Catan essence, while building upon it. It will feel familiar, but with new challenges, much like adding in a new expansion. For folks who dislike or have grown tired of Catan, this game offers more options – and more strategy – than the original version. Either way, there is something here to enjoy.

(Also, those giant, plastic rocket ships are still some of the coolest game components ever.)

Catan: Starfarers is easily my favorite game in the Catan series. I really enjoy it, and this new version is better than ever.