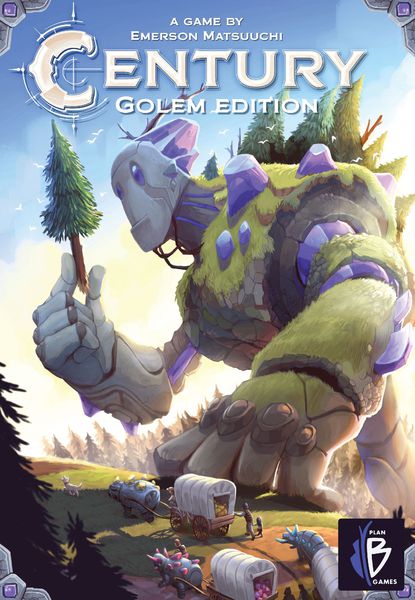 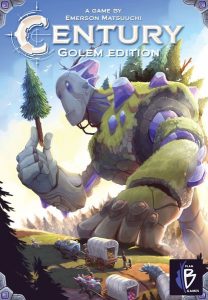 Century: Golem Edition is a re-themed version of the extremely popular Century: Spice Road. With amazing production quality and an imaginative visual style, this is an essential game for any collection.

Waaaaaaay back in the distant past of 2017, I reviewed Century: Spice Road, a game I greatly enjoyed. The resident tabletop nerds here at Geeks Under Grace listed it among our “Staff Picks” and “Best Family Games” of that year.

When Century was released, there were actually two different versions of the game: Century: Spice Road and Century: Golem Edition. Mechanically, the two were identical, but they differed in artwork, components, and theme. I took a look at one before, now I’m taking a look at the other.

Since I have already covered the core system of the game in the past, my description of gameplay will be very similar to my Spice Road review. Also, given that the games are functionally the same, it won’t be a spoiler to say that I love Century: Golem Edition. 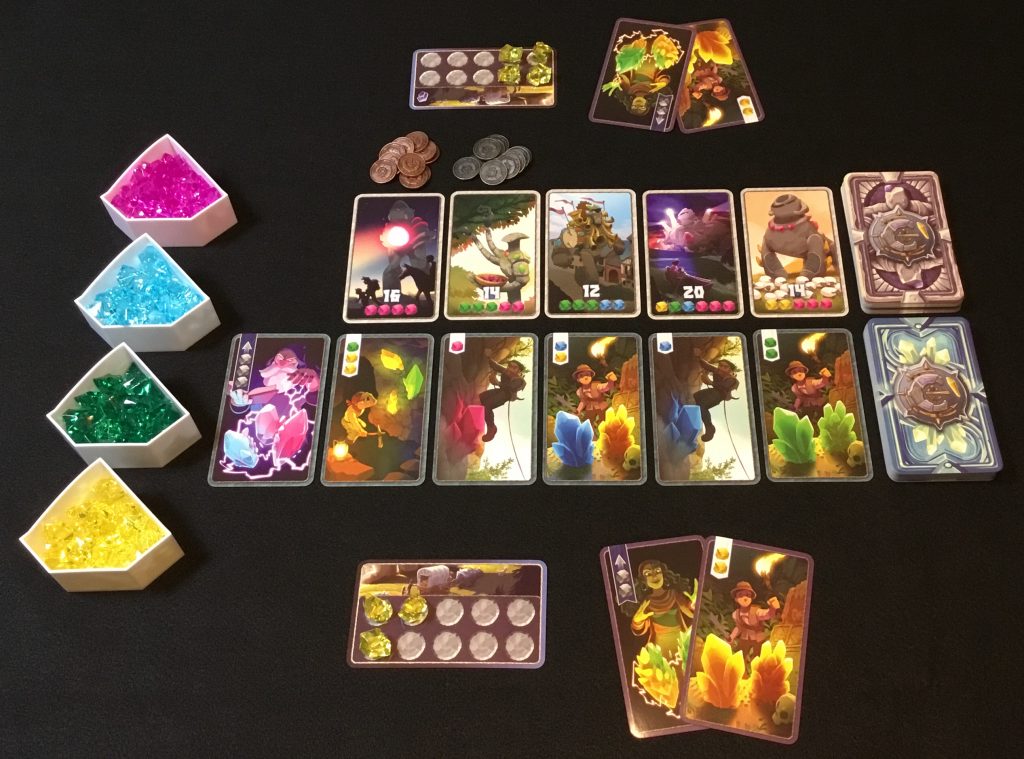 The game’s currency comes in the form of four different colors of gems that players collect and exchange. They have a hierarchy of value: yellow is the least valuable, then green, then blue, then pink, which is the most valuable. They can be thought of as having values of 1, 2, 3, and 4, respectively.

At the start of the game, each player receives the same hand of two cards, as shown. One of these cards allows its owner to take two yellow gems from the supply, and the other allows them to “upgrade” two gems to the next color. When performing the latter action, a player can either upgrade two gems once each (e.g. turn two yellows into two greens), or he can upgrade one gem twice (e.g. turn a green into a blue, and then immediately turn that blue into a pink).

The game comes with two card decks. One contains cards that provide additional trading/upgrading abilities, and the other contains victory point cards, which players can purchase by cashing in certain sets of gems. A number of cards are dealt out from each deck, and piles of silver and copper coins (worth one and three victory points, respectively to) are placed above the two leftmost victory cards.

Each turn, players can take one of the following actions:

1) Acquire a card from the market, along with any gems on it. All of the face-up market cards are available to take, but only the leftmost card is free. To buy any card other than this, players must pay one gem onto every card to its left (as illustrated below).

2) Play a card from her hand. The chosen card is placed on the table in front of them and its action is resolved (either take, upgrade, or trade gems). The card remains on the table, unavailable to be used again until the player performs a Rest action (see below). 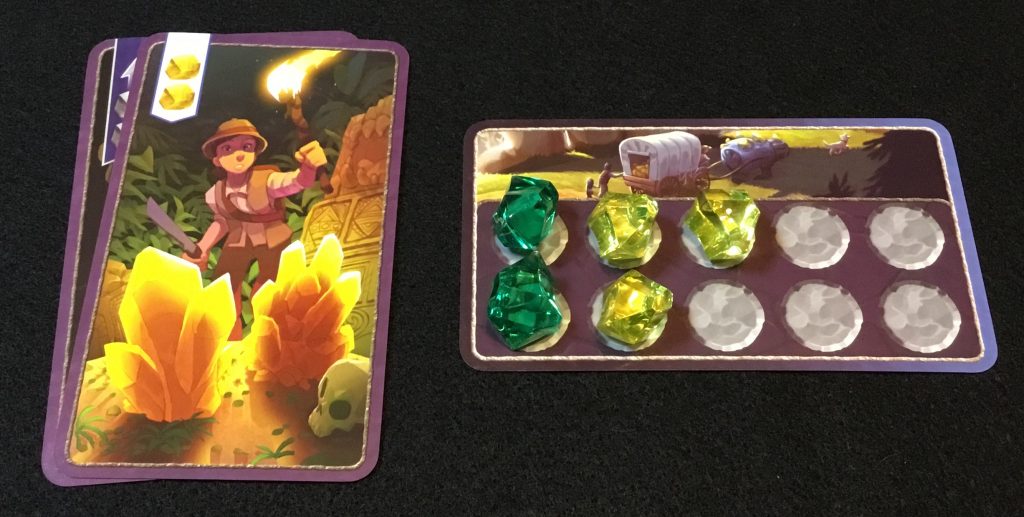 This player already had a green and a yellow gem, but playing this card allowed her to take two additional yellows.

3) Acquire a victory point card. Each of these cards lists a point value and a gem cost. A player may spend the indicated gems to acquire the card. If it is below one of the two coin piles, the player receives a corresponding coin as well. 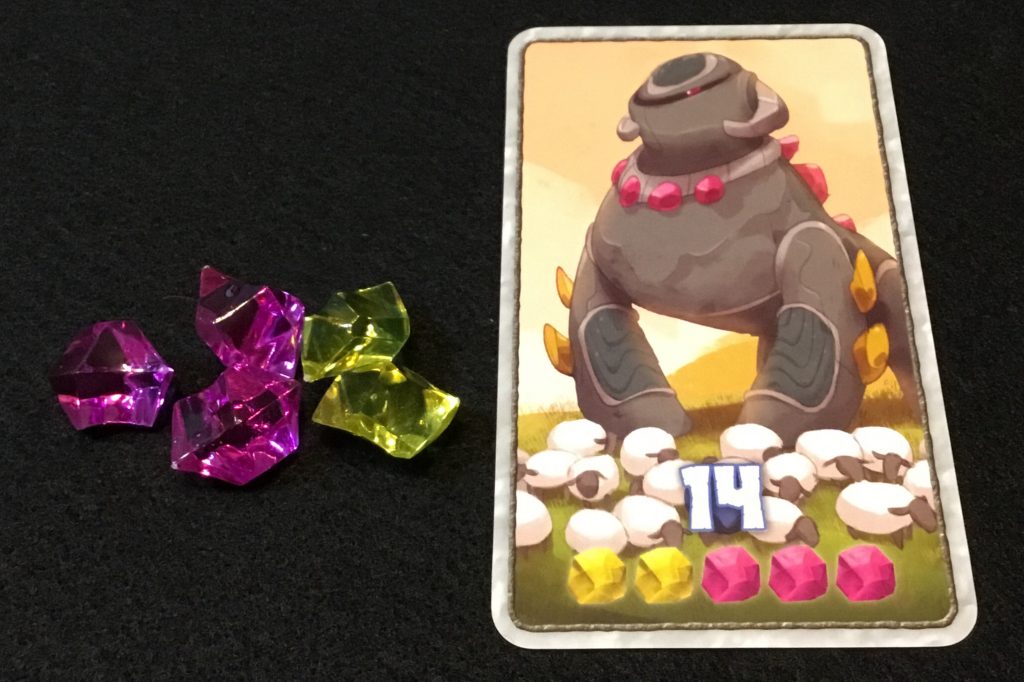 This player cashes in the indicated gems and takes the card.

4) Rest. This allows a player to return all of her played cards to her hand, making them available for use again.

If a card of either type is purchased, a replacement is drawn, and remaining cards slide down the line to fill in the gap. When a player acquires her fifth or sixth victory card (depending upon the number of players), the current round is completed and the game ends. It’s important to note that the player who triggers the end of the game does not necessarily win, but rather, the player with the highest overall score wins.

Though Century: Spice Road and Century: Golem Edition are ostensibly the same game, I actually like Golem Edition a fraction more. The art and production of both games are very nice, but the theme of giant, hulking colossi—however loose it is—is quite enjoyable. The Golem version has a sort of Howl’s Moving Castle feel to it, which captures my imagination in a way that trading spices just doesn’t.

The diamond-shaped trays are great, and the gems themselves are quite sizable, noticeably larger than the cubes from Spice Road. Additionally, the box comes with an excellent insert which stores everything neatly and easily. (It may be tough to tell from my picture, but there is clear, plastic “lid” that fits over the gem bowls to keep their contents from spilling out everywhere.) 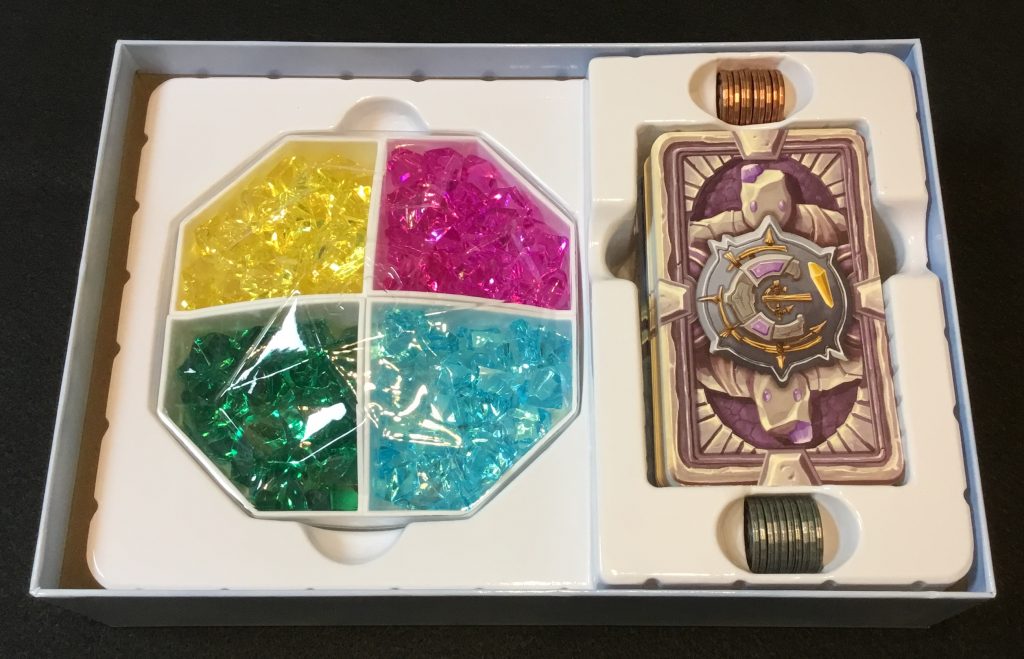 There is one important limitation to note about this version: Golem Edition is not compatible with the other Century games. Spice Road was the first in an inter-mixable trilogy of games, all of which use a common art style and resource color scheme. Since the gems in Golem Edition use a different set of colors, this version is only playable by itself. The good news is that this will only matter to players who wish to combine multiple games in the series.

My fondness for Century has remained strong since I first played it two years ago. It has that classic simplicity I love so much; it just feels timeless. Gameplay is lightning-fast, with turns sometimes taking mere seconds. The accessibility of the rules, coupled with a plethora of simple-but-meaningful strategic choices make this a game for a wide audience. It’s honestly hard for me to imagine someone NOT loving it.

Whether you are an experienced tabletop connoisseur or a starry-eyed newcomer, Century is a must-have game. It offers something for everyone, gamers and non-gamers alike. It will be just as good a fit for a family game night as it will for a weekend-long, Red-Bull-fueled gaming marathon. Just as it did two years ago, this game gets a major thumbs-up from me. Don’t miss it.

A review copy of Century: Golem Edition was provided by Plan B Games.