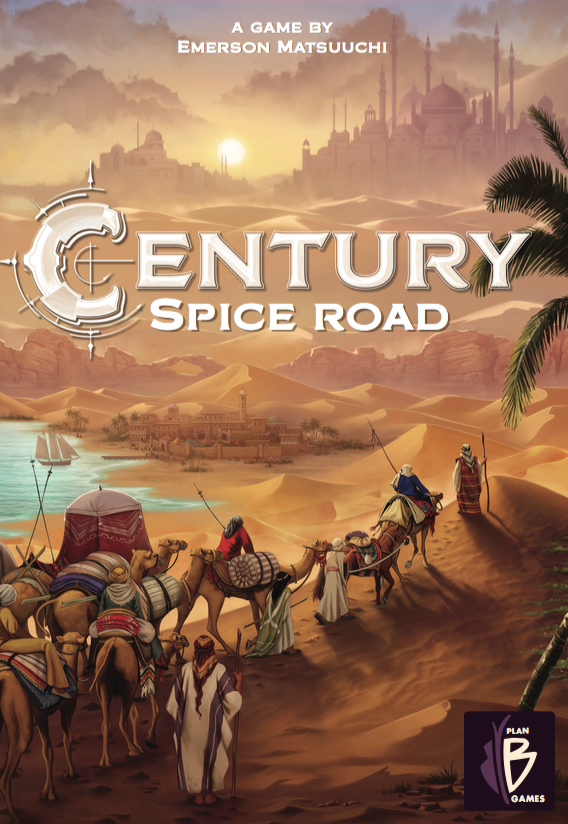 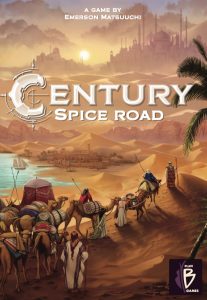 Century: Spice Road is the first in a trilogy of games from Plan B Games. This light resource management/set collection game is one of the breakout hits of 2017.

2017 has been quite a year for tabletop games. Between Pandemic Legacy: Season 2, Photosynthesis, Sagrada, Gloomhaven, and dozens more amazing titles, there have been some major milestones in this hobby. One game that has garnered a lot of attention is Century: Spice Road.

Playing in about a half hour, this two to five player game is one of those “elegantly simple” designs, a game that does a lot with a little.

At first glance, Century: Spice Road doesn’t look like much. It’s a game about trading cubes for better cubes, and then spending those cubes to buy cards, which either give you points or more cubes. Sounds thrilling, I know. But this game is much more than the sum of its parts. 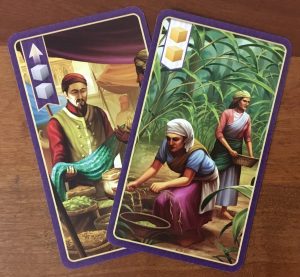 The game’s currency comes in the form of four different colors of cubes, thematically representing different spices that merchant players trade and sell. These spice cubes have a hierarchy of value: brown cubes are the most valuable, followed by green, then red, then yellow, the least valuable.

At the start of the game, each player receives the same hand of two cards. One of these allows the player to take two yellow cubes, the other allows the player to upgrade a cube two times. This can involve either upgrading two cubes once each (i.e. turning two yellows into two reds) or one cube twice (i.e. turning a red into a green, and then immediately turning that green into a brown).

The game comes with two decks of cards. One deck contains cards that provide players with additional trading/upgrading abilities, and the other contains victory point cards which players may purchase by cashing in certain sets of cubes. A number of cards are dealt out from each deck, and piles of silver and gold coins (worth one and three victory points) are placed above the two leftmost victory cards.

Here is how the main play area looks when set up:

Each turn, players can take one of the following actions:

If a card is purchased, a replacement is drawn, and remaining cards are slid down the line to fill in the gap. When a player acquires his fifth or sixth victory card (depending upon the number of players), the current round is completed and the game ends. It’s important to note that the player who triggers the end of the game doesn’t necessarily win, but rather, the player with the highest overall score wins.

I heard Century: Spice Road touted as the game that would dethrone the 2014 mega-hit Splendor. Being a huge fan of the latter, I was intrigued by the numerous Splendor comparisons, but I was surprised to find that Spice Road felt much more similar to Sid Sackson’s 1968 classic Bazaar. (I suspect that not too many gamers these days have played Bazaar, so I understand why this comparison isn’t made more. But I digress.)

I am loath to use tired, generic terms to describe a game, but Spice Road is the definition of elegance in design. There is absolutely no clutter or fiddlyness in this game. It is clean, intuitive, and lightning-fast. Additionally, players will find underlying strategy options to explore. The game is not super deep, but its intricacies are not immediately apparent; they reveal themselves as you play. 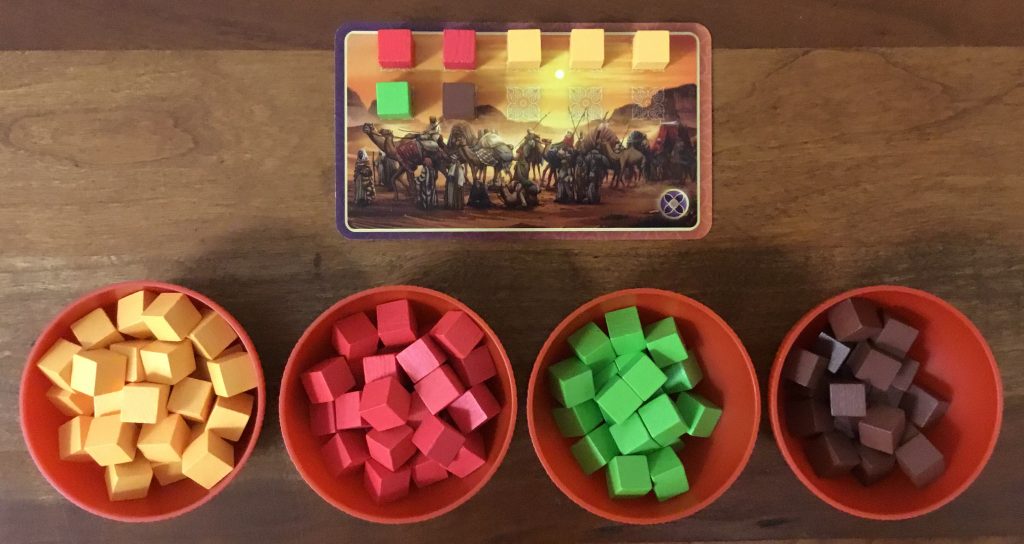 For example, suppose a player has the necessary cubes to purchase a victory point card in the middle of the market line. On the one hand, he could buy it now, but he could also try to wait, hoping the card will move into the silver or gold coin slot and be worth a bit more. If he decides to wait, however, he may risk someone else competing with him for the card, and he will have to hold onto extra cubes that count toward his resource limit of ten. It’s not a brain-burningly deep decision, but it offers a bit more choice to players.

It’s also interesting how, as the game goes on, the relative value of market cards changes. In one of my recent rounds of Spice Road, a card appeared that allowed its owner to take two red cubes, a pretty solid ability. However, being at the far end of the market, it was prohibitively expensive (a player would have had to pay a cube to each of the five cards before it to purchase it). I was eyeing this card for many turns, waiting for it to become cheaper. As the game went on, the card did indeed move and become more affordable, but by the time it had reached a reasonable price, the game was already almost over. If I had been able buy this card on the first turn, it would have paid off again and again throughout the game, but by the last couple of turns, when I would have only been able to use it once or twice, it ceased to be as tantalizing. Subtleties like this give Spice Road a satisfying play trajectory; a simple system that offers a bit more underneath.

I really enjoy Century: Spice Road. As much as I love Sid Sackson’s games, Bazaar is showing its age, and I’m glad to see a new take on its ideas. The prospect of two more Century games is exciting, and I look forward to seeing what else the series has to offer.

Century: Spice Road is an excellent offering from Plan B Games. I can't wait to see the next two games in the series!