Review: Choose Your Own Adventure: House of Danger 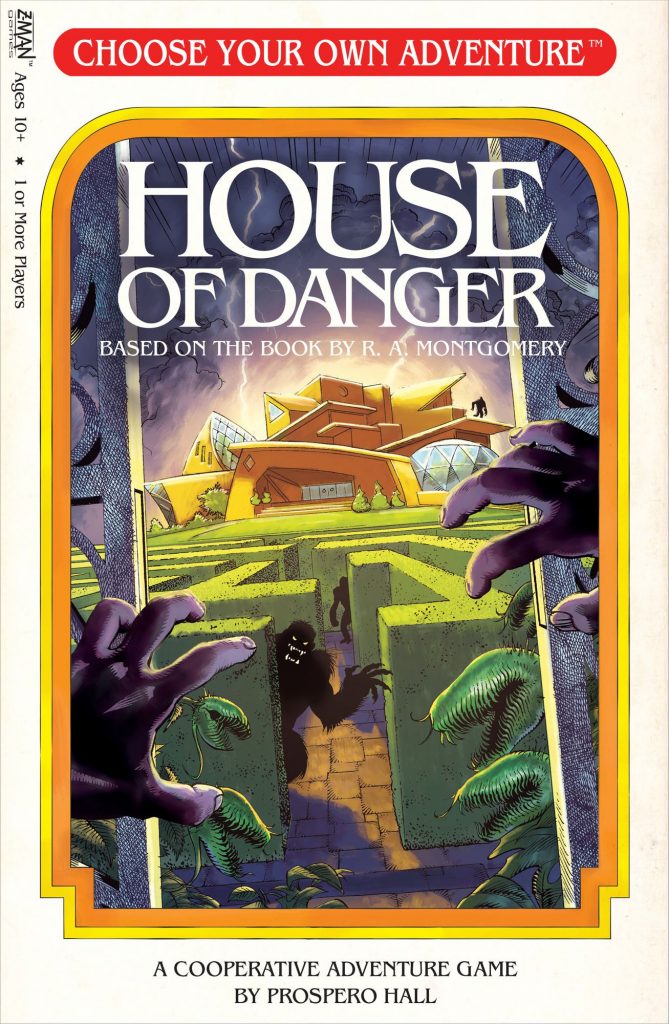 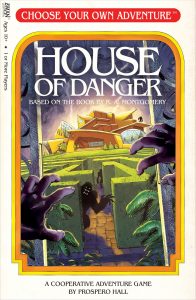 Choose Your Own Adventure: House of Danger is the first in what will likely be a series of games based on the classic CYOA book series. Capturing the flavor and essence of the source material, while expanding on it with interesting game decisions, this is an amazing cooperative experience for any number of players.

This game involves suspenseful narrative situations and themes of psychic powers. Though the story is presented in a very silly, inoffensive manner, this is something to be aware of. If players are okay with the classic CYOA books, they shouldn’t have a problem with the game.

[WARNING: This review contains extremely minor spoilers. I will not give away anything that will jeopardize your ability to enjoy the story, but consider this your heads-up.]

Choose Your Own Adventure: House of Danger (CYOA) is an awesomely-retro throwback. Distilling the essence of the classic book series into a cooperative tabletop game, it offers a rich narrative experience for one or more players.

The game includes five “chapters”—each a self-contained scenario within the larger story. Chapters consist of two decks of cards, one featuring story text (essentially, the “pages of the book”), and the other showing clues and items players can find along the way. A small board is used to track the “Danger Meter” and the “Psychic Scale” (more on these in a moment). The setup for the first chapter will look like this: 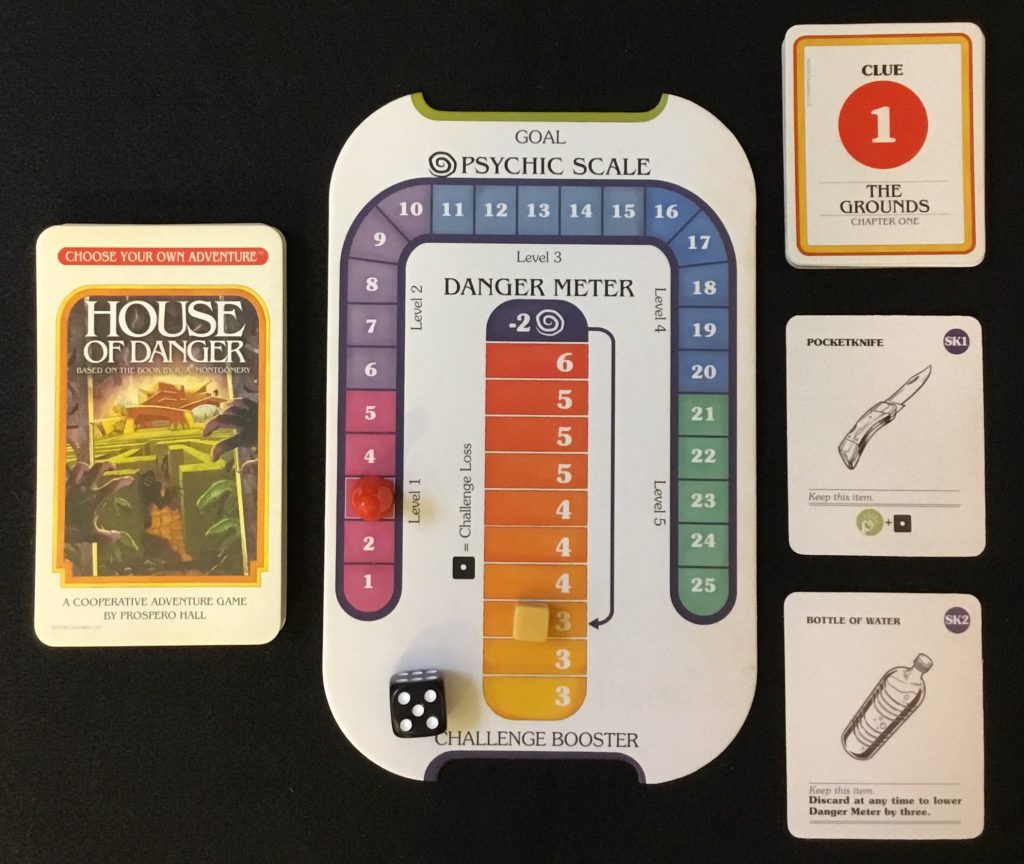 As players progress through each chapter, they will encounter challenge tests. The current Danger Level determines how difficult a challenge will be, and these tests are resolved with the roll of a die. A result equal to or higher than the current Danger Level is a success, and anything below it is a failure. As players find items, they may gain advantages that allow them to add a modifier to their roll (say, +1 or +2). However, a die result of 1 is an automatic failure, and cannot be modified. To illustrate in a spoiler-free way: 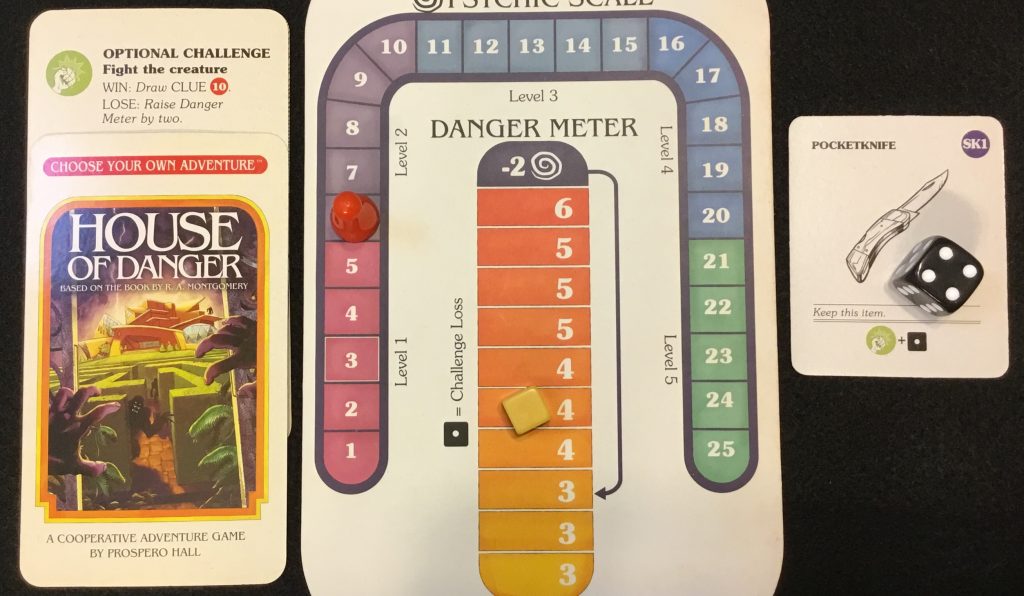 The players are having a fight encounter (indicated by the green fist icon on the card). The Danger Meter is currently at 4, so a die result of 4 or more is a success. However, the players also have the Pocketknife starting item, which adds +1 to a fight challenge. They roll a 4, which is enough to defeat the monster. (Because of the bonus from the Pocketknife, they only needed a 3.)

The Psychic Scale indicates how in-tune players are with the supernatural forces at work. Sometimes, their current position on the track can influence the outcome of a story card. For example, a challenge might provide a bonus if players have reached a certain threshold on the scale.

The markers on the Danger Level and Psychic Scale will move up and down as the story unfolds. It is in players’ best interests to keep the former low and the latter high.

The flow of play aligns perfectly with the source material; it will be immediately familiar to anyone who has read CYOA books. The game is very straightforward: it boils down to 1) read the story text on the card, and 2) decide what to do next from the options given. With that said, though, the addition of simple game mechanisms elevates the experience to a new level. This game offers players more agency than the CYOA books, due in large part to the challenges. Certain story bits will only be accessible if players have found a particular item, so they will want to explore many places, but doing so may raise the Danger Level or trigger extra challenges. Moreover, some of the tests are optional, so players must decide whether it is worth it to risk the penalty for failure in hopes of getting the reward for success. In an evolution from the books, which had fixed paths and determinate outcomes, the new ideas in this game draw players into the story in a way the originals never could.

Because the play experience relies so heavily on an emergent story, it’s hard to comment on specifics about the game. After all, the fun of it is uncovering the adventure for yourself, and I certainly wouldn’t want to spoil anything. What I will say, though, is that this game encapsulates everything that was great about the books. The writing is tongue-in-cheek in the best way, and it features a wacky story that doesn’t take itself too seriously. Allow me to illustrate the tone of this game with a no-context image from one of the cards: 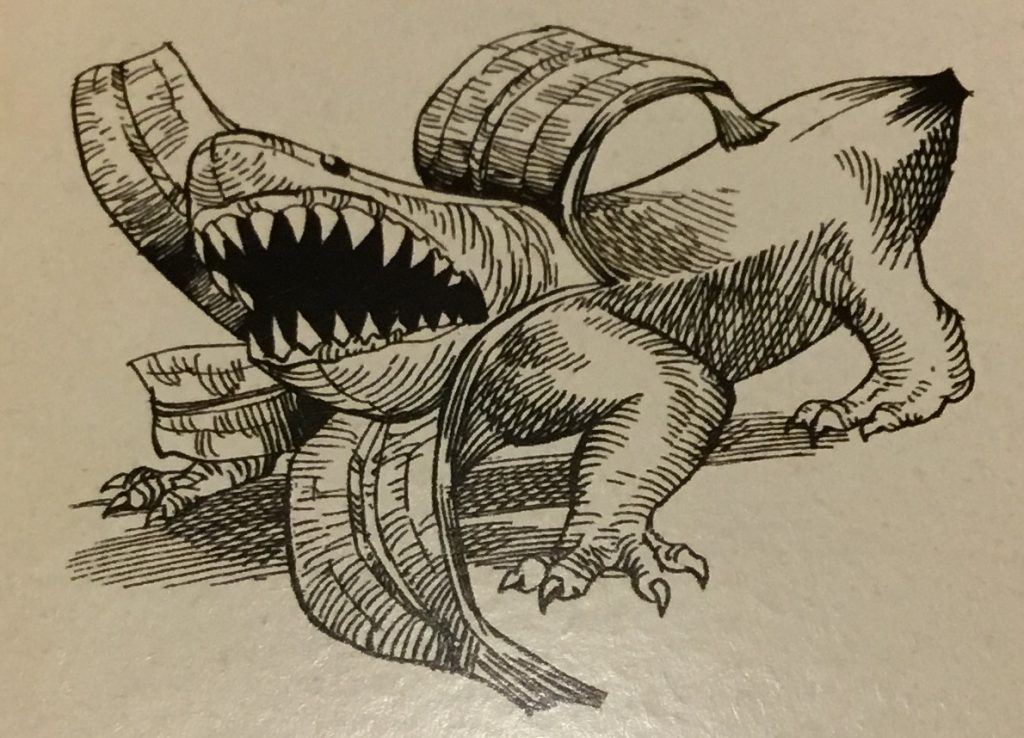 (If a hybrid banana-shark doesn’t automatically sell you on this game, I don’t know what will.)

CYOA is re-playable in the same way that the books are re-readable: if players make different choices the second time through, the story will be different. Thus, the replay value won’t last forever—at some point, players will have done everything there is to do—but the game provides a lot of mileage along the way.

Of all the new games I’ve played so far in 2018, this is my favorite. And that’s not even nostalgia talking; I read a couple of CYOA books back in the day, but I would hardly qualify as a super-fan. To me, the most rewarding games are the ones that provide rich, memorable story experiences, and on that front, this game knocks it out of the park. Players will remember this game’s story for years. I give Choose Your Own Adventure: House of Danger my highest recommendation. I can’t wait to see what comes next.

Choose Your Own Adventure: House of Danger is a blast to play. It's my favorite new game so far in 2018.