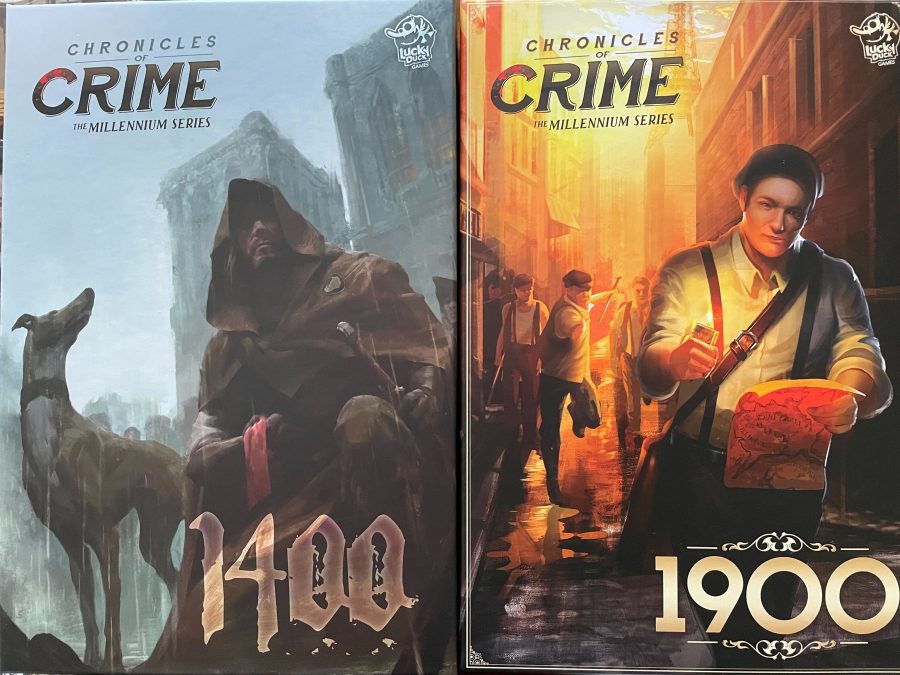 The Chronicles of Crime games task players with solving crimes in various settings and locales. While the original was set in the present day, the Millennium Series are standalone games that send players back (and far forward for one other game) in time to different eras, still solving crimes and catching killers. Using both cards and augmented reality, players are able to hop into the roles of different gumshoes. So, do you have what it takes (and a smartphone)?

Crimes are often of a violent nature, and may involve killings, kidnappings, and theft, among others. Sometimes players may find blood or bodies when investigating crime scenes. Gore isn’t shown.

One of the best things about the Chronicles of Crime games is that they involve little to no setup. Players will get out a few decks, download a story from the app, and be ready to play in minutes. Play consists of interviewing witnesses and suspects by scanning their QR code and the codes of different clues players have found already. By asking the right person about the right clue, you can catch a break in the case that gives you more clues or locations to look into. Players will also have to use an augmented reality feature to search crime scenes, which means they’ll have to “look” around a room by either swiping or tilting the smart phone or device the app is on. This AR mode is timed to give players a nudge at being quick but thorough, since clues they “see” will correspond with clue cards in various categories. For example, if you saw a Bible on a nightstand in the AR crime scene, you might grab the “books” card, or the “Religious items” card. The game lets you know if you’ve found a correct clue, and in the intro missions will even nudge you in the right direction if you’re wrong or have scanned a clue that isn’t there.

Once players have found clues or locations, they can ask characters about them and go to those places; nothing is keeping you from going everywhere and asking anyone about everything except the game clock. Every time you ask someone a question it takes 5 minutes, and every change to a new locale takes 20. This is only frustrating when you accidentally ask someone about the same clue twice, or forget that you already asked someone earlier in the game, because you still get docked 5 minutes. The quicker you can solve the case, the better your score will be.

There are slight differences in Chronicles of Crime 1400 and 1900, although these stories present a sort of overarching legacy game by having you play ancestors in the same family in Paris in both games. In 1400 you have a loyal dog, who can assist you at any time by smelling clues and trying to recognize the scent or even lead you to new places where the scent came from. You also have vision cards, which give you hints and clues as to what really happened as you’re trying to solve the mystery. The dog is sadly not present in 1900, but instead of vision cards you have puzzle cards, which are even more fun. Pencil and paper are not provided, but may end up being necessary (they were for us).

Out of all the different choices gamers have for detective games, the Chronicles of Crime games are some of the most accessible out there. The one fault I’ve found is that on occasion, the entire investigation can get held up if you fail to ask one specific person about one specific clue, and you end up stalling out for a bit. However one could argue that this is fairly accurate compared to real investigations, at least as far as I know of them thanks to television and movies. If you want something different than a regular tabletop game or escape-room in-a-box, both Chronicles of Crime 1400 and 1900 are a fun way to spend an evening as an armchair detective.

Not perfect, but easy setup and a fun way to spend an evening.