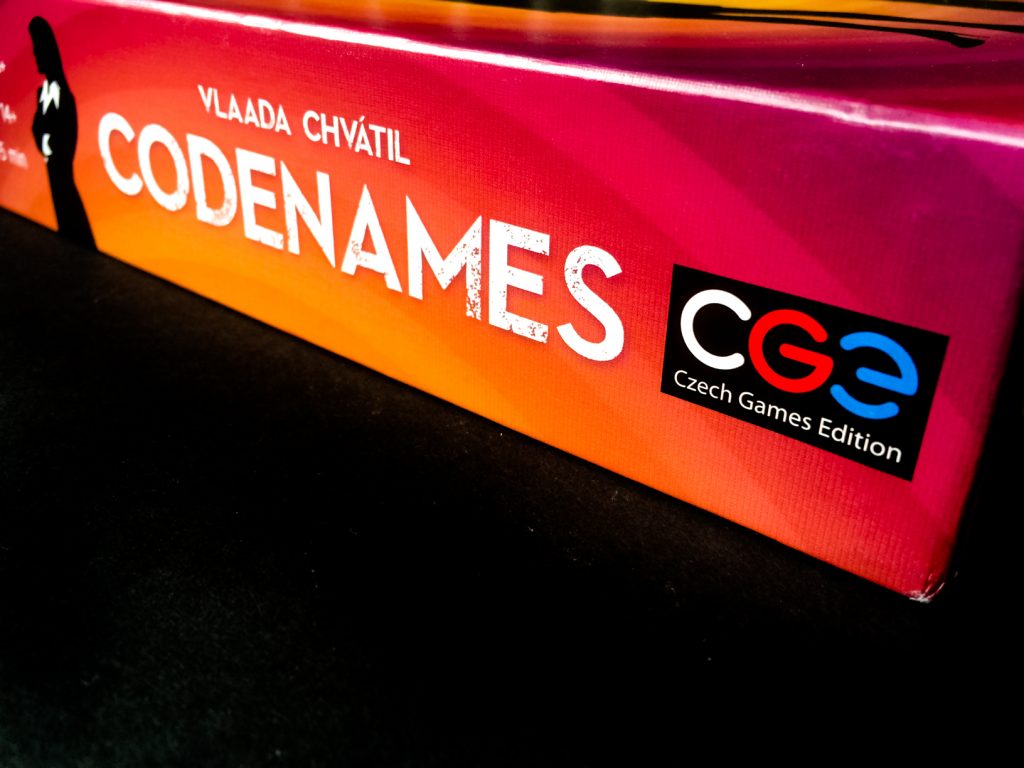 Codenames pits two teams of spies against each other with hopes of being the first to decode the clues given by their spymaster. Using a grid of random words, each clue attempts to find common links to lead the team to discovering which eight (or nine) words are theirs, and which belong to the opposing team. The balance of the game depends on how well the spymaster can get inside the heads of his or her team and successfully communicate their clues to reveal the correct words on the table.

Codenames is designed by the quirky Vlaada Chvátil, who also brought us crazy games like Galaxy Trucker or Dungeon Petz. Vlaada also created the classic Through the Ages: A Story of Civilization, and is well-known in the hobby as a skilled and classic game designer.

Codenames is just words and tiles with secret agents on them. No questionable content here, folks. 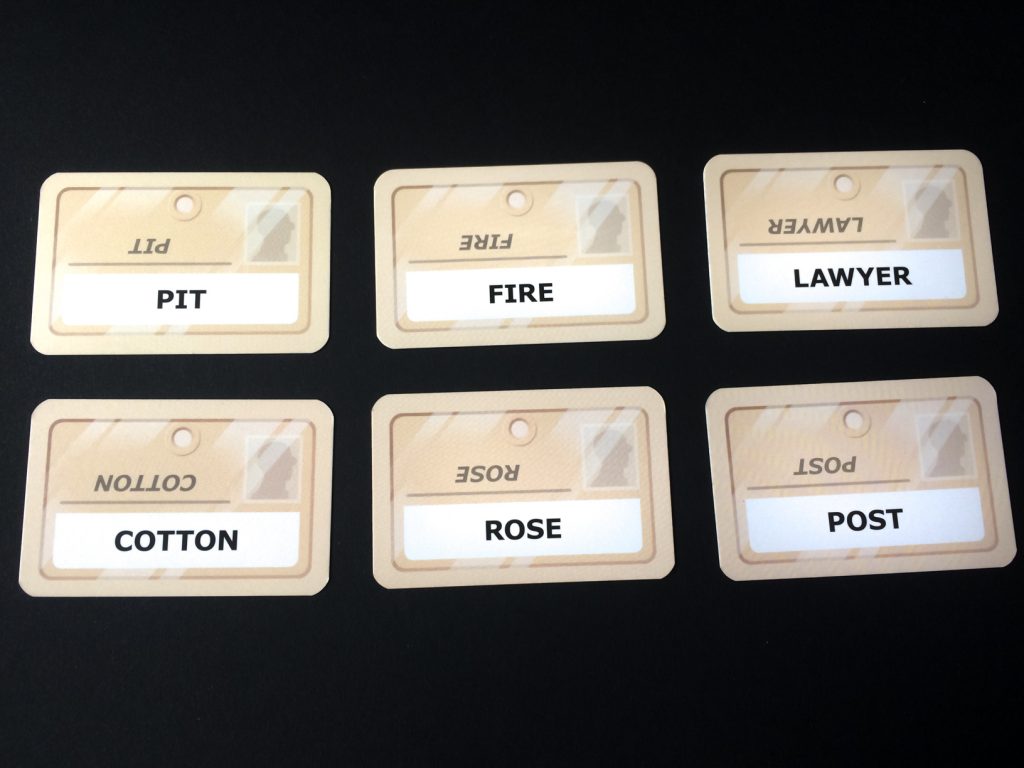 Codenames begins with a red and blue team who choose a single spymaster to give clues for their hidden agents. Once sitting at opposite ends of the table, the spymaster spends time learning the variable grid of words for this particular game. Finally, after the blue spymaster has meticulously poured his clever brains all over the 5×5 grid, he gives a cryptic clue for a collection of words on the table. Trying to connect the words check and Jack, he thinks to himself, “a check holds money, and a credit card holds money… and a Jack is a playing card. I should go with–” and out loud he proudly proclaims, “Card. Two.” The first word (card) tells his team what words on the table relate to his clue, and the second word (two) tells his team exactly how many words on the table his clue is referring to. 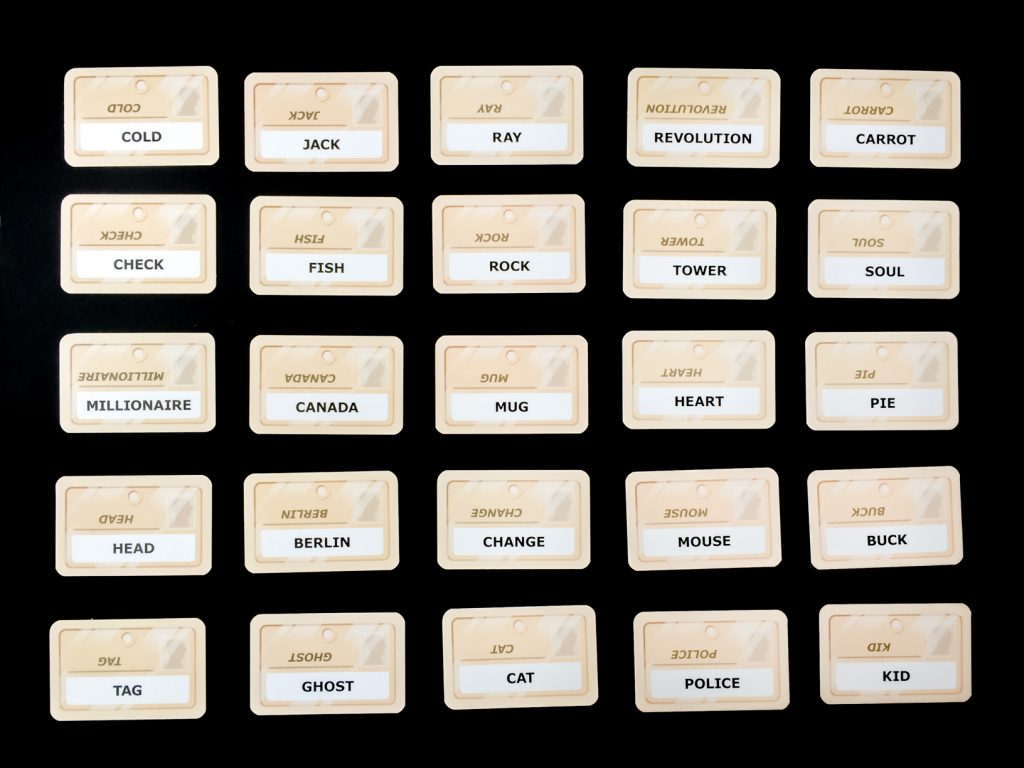 A 5×5 grid that leaves you temporarily paralyzed, as your mind engages with far too many unrelated words.

The eyes of his team dart to the mess of words as they do what they can to decipher the words of the spymaster. One player on the team rambles about playing cards, so their period of deliberation is short, and one player slaps his finger onto the card Jack. The spymaster is glad, placing a blue agent over the word. This leave eight words left to determine, but the team doesn’t feel great about the remaining guess. In other words, they aren’t making the connection to the word check. Let’s face it, I’m stretching that, too. They pass, and play goes to the next team. Red team repeats the process, and later the blue team will receive a new clue for different words. 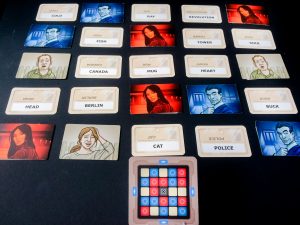 Now halfway through the game, the answer grid at the bottom of the photo dictates the correct words to the spymasters.

Play continues until one of two things happen: one team guesses all of their hidden words, or one team accidentally chooses the hidden assassin card. The former results in an immediate win for the team, and the latter in destruction, as the hitman eliminates the team.

Despite the simplicity of rules, the thrills of Codenames revolve around giving vital clues that make sense to your team, and smartly outguessing your opposition, who are also ravenous in their pursuit of victory. The spymaster must balance his team. Suppose there are two players he has never met until this evening, but also his wife plays alongside them. He might know how his wife will think and interpret his clues, but the others are strangers, so how will he know the inner workings of their brains? This potentially breeds confusion, especially if he tries to make large leaps from word to word; for example.

Codenames also employs facets of the childhood favorite, Memory. Spymasters are discouraged to give any confirmation grunts or clue reminders from past rounds. As the team moves along, solving clues, they might forget past clues, or maybe even choose a word the spymaster didn’t intend, thinking they indeed chose the correct word. Without any communication from the spymaster, the team shoots in the dark so-to-speak, and this is to the gain of Codenames.

The only thing that can slow down the game is the mental gymnastics the spymaster hops through. It is easy to get lost in all the possible clues you can reveal to your team. This can cause everyone at the table to scream, “It’s one word! Why are you taking so long?” 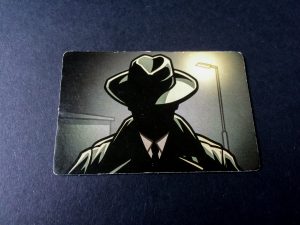 Whenever I introduce this game to new a group, I begin by telling everyone they have received some kind of secret government information, and it is up to them to find their fellow agents before the enemy team does. Perhaps there’s a war declaration, nuclear attack, scandalous political information (etc.), but the goal is set for them. Even though I’ve spiced up the setting, without fail, not a single player will remember my introduction. Maybe I’m a poor storyteller, but more likely, it’s because players are playing a word game.

Components are oddly-shaped, tan cards, alongside thicker ones denoting red, blue, neutral, or “game over.” The artwork is really just fine. I’m not thrilled about it, but it does the job. While the words are cleanly read on a white background, the worst decision in the graphic design process was to print the same word, flipped over (for people on the opposite side of the table), but printed over a tan color. They are not nearly as legible, and even if I’m on the opposite side of the table, I find myself craning over the layout to read the words on white, despite them being upside-down.

Now, just because players aren’t concerned about the so-called secret information doesn’t mean they aren’t deeply concerned about beating their opponents. In fact, my observations have brought joy to my eyes. I’m typically the spymaster, being the one teaching the game to new groups consistently. The first game goes by, and players still aren’t understanding why it matters for me to give clues for more than one or two words at a time. I might be paralyzed by analysis at moments, but once the realization sets over them that this game is essentially a race against the clock, sheer panic sets in. It all happens at once. They have two left to guess, and we are stuck at four. I have to give a big clue to put us ahead, or to at least tie it up. I mention this fact to the team, and as their eyes count the opponent’s tiles, it hits them.

This is the joy of Codenames. The game is so simple, yet inspires shouting, victory dances, and playful “in-your-face” moments. It brings out the fun of the spirit of competition. It’s not about who’s more creative or better at strategy games. Instead, this game forces you to figure out your team, and think the way they do. When you pull off a four-word clue, and your team masterfully selects your words because somehow “trampoline” connected spring, fun, fall, and sun, you feel like a boss. (This hasn’t happened to me by the way. I’m just day-dreaming.) 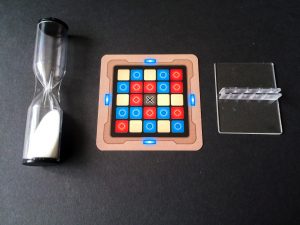 Feel free to flip the timer on any player to lay on a thick layer of pressure.

In my experience, this is the essential game. This game will, without effort, draw crowds to your table. This is the kind of game that takes no time to explain, but the next fifteen minutes are full of laughs, frustration, and, eventually victory. I’ve played with four different groups over the last year that have promptly ordered their own copy of Codenames after our night of gaming. Some of these are people who don’t care much for board games but see the potential this one has for Friday nights with friends and holidays with family.

I do understand there are many game groups that would deem this too light for their taste, and I agree. Codenames does sit very comfortably as a filler for groups like that, either to start the evening or top it off. I know this game will be played whenever I bring it to a game night, and even though I’d much rather play something longer, with more strategy, I’d rather bring Codenames because it introduces more people to the hobby. It shows that a game is more than bits on a board or abstract nonsense. It’s a game about people and learning about how they think. It’s about the thrill of competition and laying down a four-word banhammer on your opponent to pour on the pressure, as you flip the timer in their face, smirking and high-fiving your team with malice in your eyes.

Yes, I recommend this game as a blind purchase from a review. If words aren’t your thing, let me sell you on Codenames: Pictures, which looks to be out in the coming months. 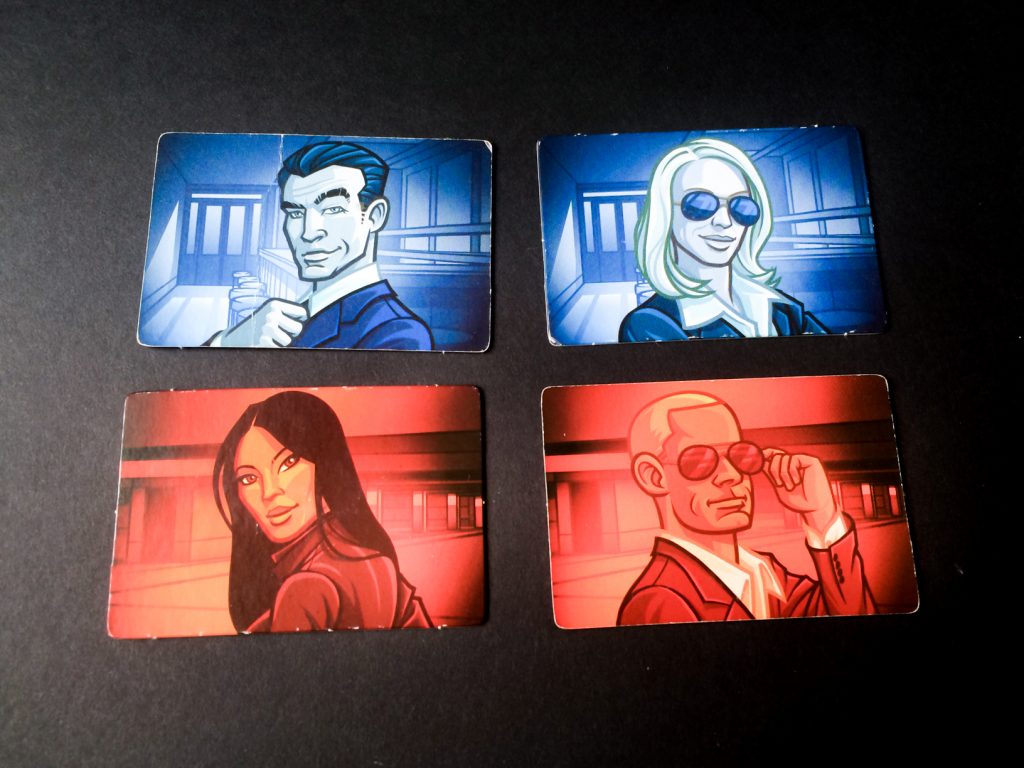 Codenames stands alone as the strongest party game I've ever played. With seemingly limitless replayability and fun-spirited competition, I can't recommend this game enough. Necessary for all gaming collections.