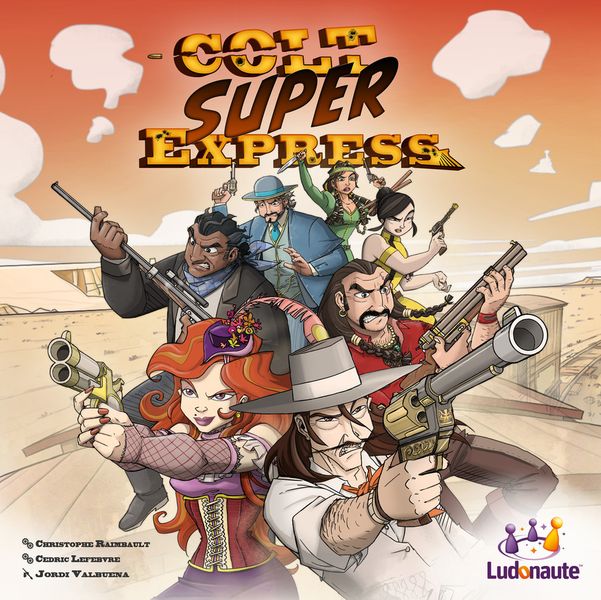 Colt Super Express is a stripped-down version of Colt Express, which won the Spiel des Jahres in 2015. While much of the game remains the same, the 3D train has been replaced with cards. Players will still program actions and try to be the richest, and last, bandit standing. When the dust settles and the bullets are done flying, is this a train you want to ride? Read on for our review. 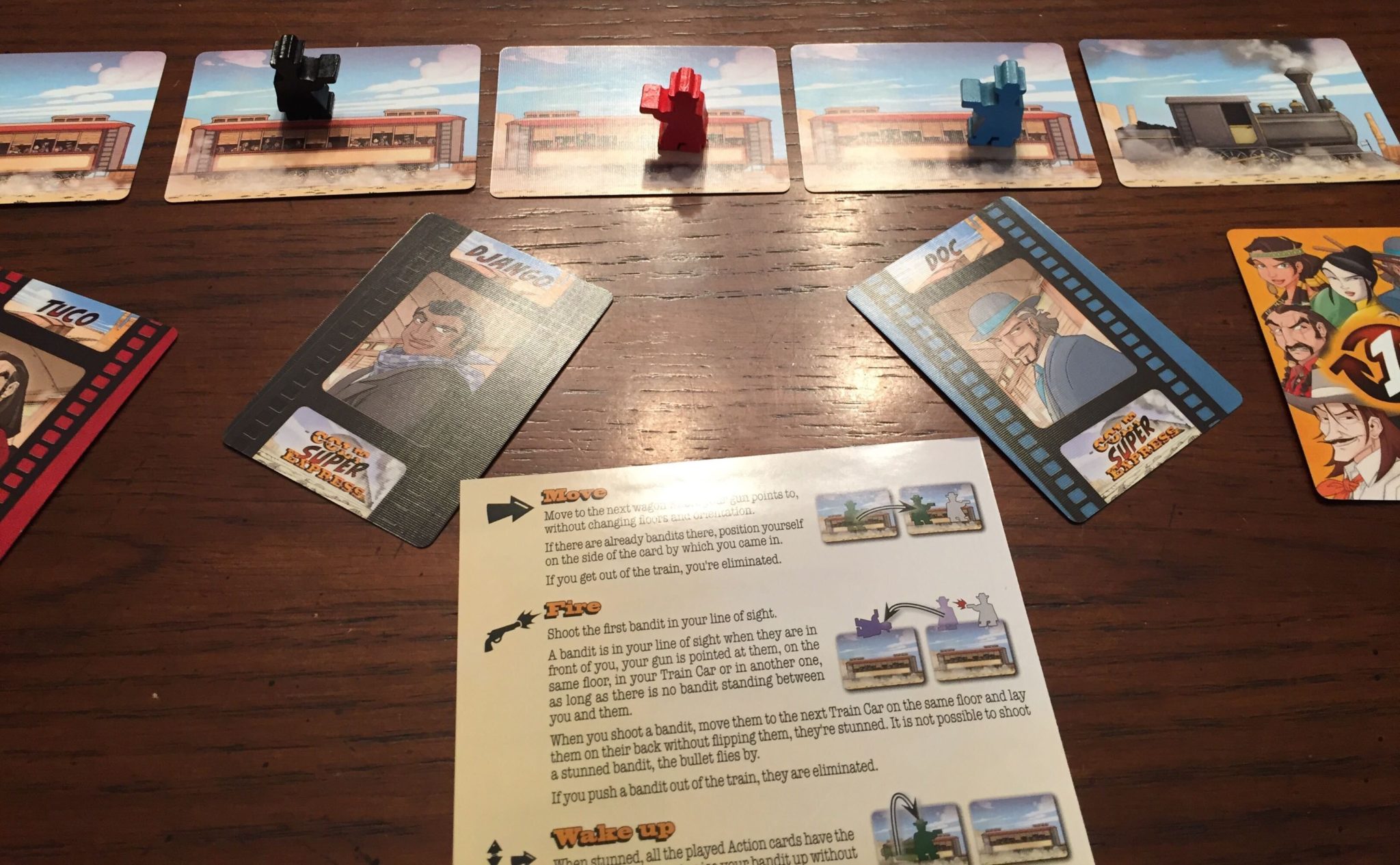 Players can shoot each other with “Fire” cards, but all that happens in-game is they are stunned and knocked down, thereby losing their next programmed action, or knocked off the train and eliminated.

There are three female characters; two show a significant amount of cleavage given the age range suggestion, and the third feels like a stereotypical Asian character with traditional clothes, dragon tattoo, and nunchucks for a hair-holder. 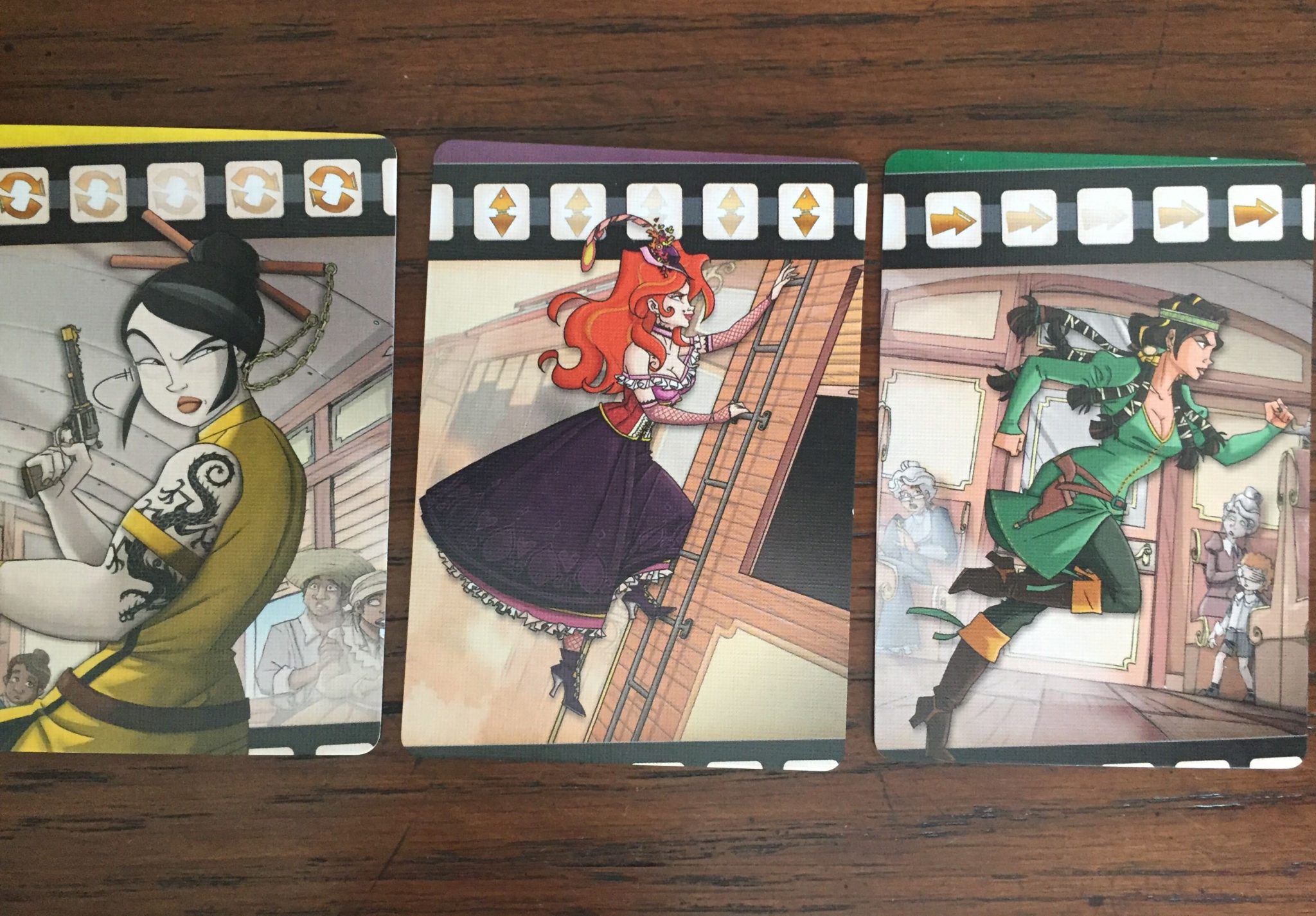 Colt Super Express is played out over two phases: “Schemin’” and “Shootin’”. In the first phase players will choose 3 of their 4 Action cards (or 5 or 6 if played with the optional included expansions), and place them face-down in the order they want them to be resolved. Phase 2 sees the players revealing their cards and resolving the actions one at a time, starting with the first player. If a character is shot by a “Fire” card, they are moved to the next train car and laid down stunned. Stunned characters cannot be hit again, but if a player is shot while standing on the edge of the train, they’re knocked off the train and eliminated.

The game also includes the “Horse” and “Reflex” cards that can be added for more depth; however, most of their use is situational at best. The Reflex card lets a stunned player get up and shoot the first bandit in line of sight without changing their orientation. If you’re not stunned, you lie down. Horse lets you move your bandit meeple to the locomotive, facing forwards. Also, if you were just knocked from the train and Horse comes up as your next action you’re saved at the last minute and still move up to the locomotive. 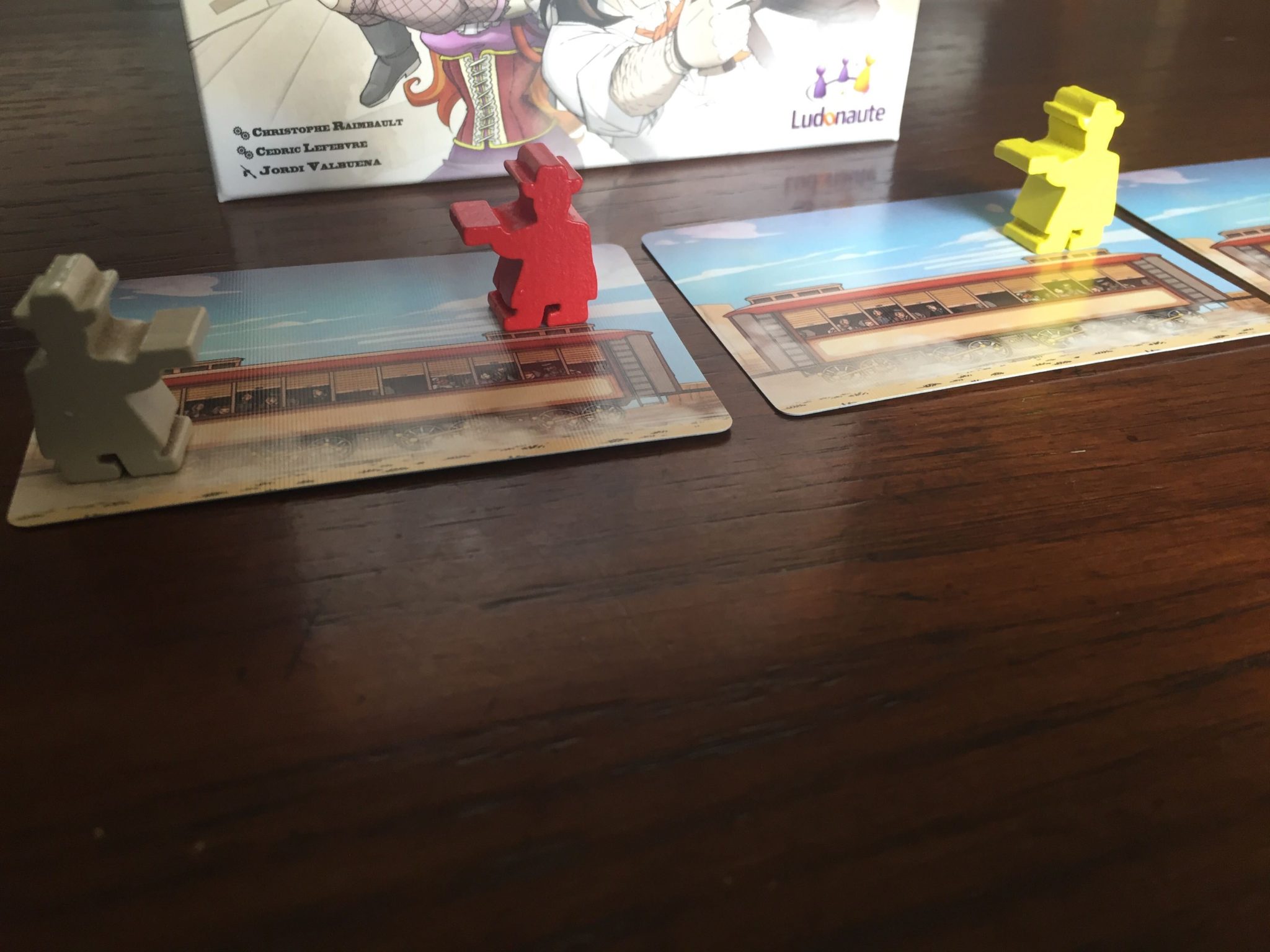 After each round the last train car is disconnected, and anyone left on it is eliminated. The removed train car is flipped over and given as loot to the closest bandit. Play continues until one bandit is the last person standing on the train. If multiple bandits survive and make it to the locomotive, whoever has the most loot wins. 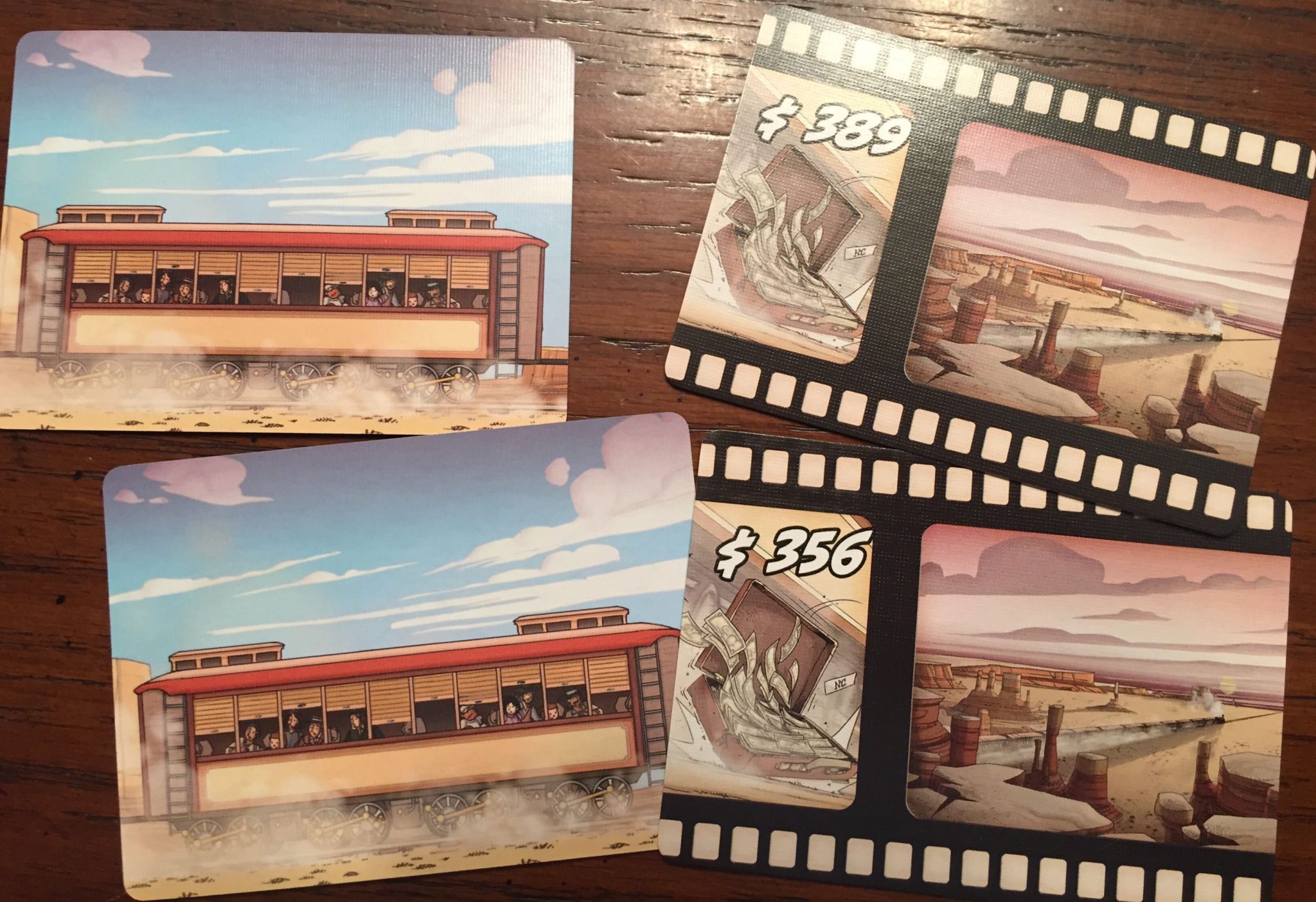 As with many programming games, it’s hard to determine what will really happen in a given round. The best laid plans will go awry quicker than you can say “Draw!”. Unless you’re the first player, one or more of your cards will fail to happen as you planned, which often can result in shooting at no one, or not moving up to the next safe car like you wanted to. This can be entertaining but is often frustrating, even with how fast a full game goes.

The art is also mostly a miss, in my book. Every single train car is exactly the same, down to the people in the windows. Also, the character cards are all in the exact same poses for each action; everyone’s “Move” card shows them running at a tilt with the same arm positions and same leg up, and everyone’s “Change Floor” card shows them climbing a ladder in the exact same way. These plus the stereotypes and copious cleavage for an age 8+ game did a lot to pull me out of enjoying Colt Super Express. It just felt like a lot of corners were cut. 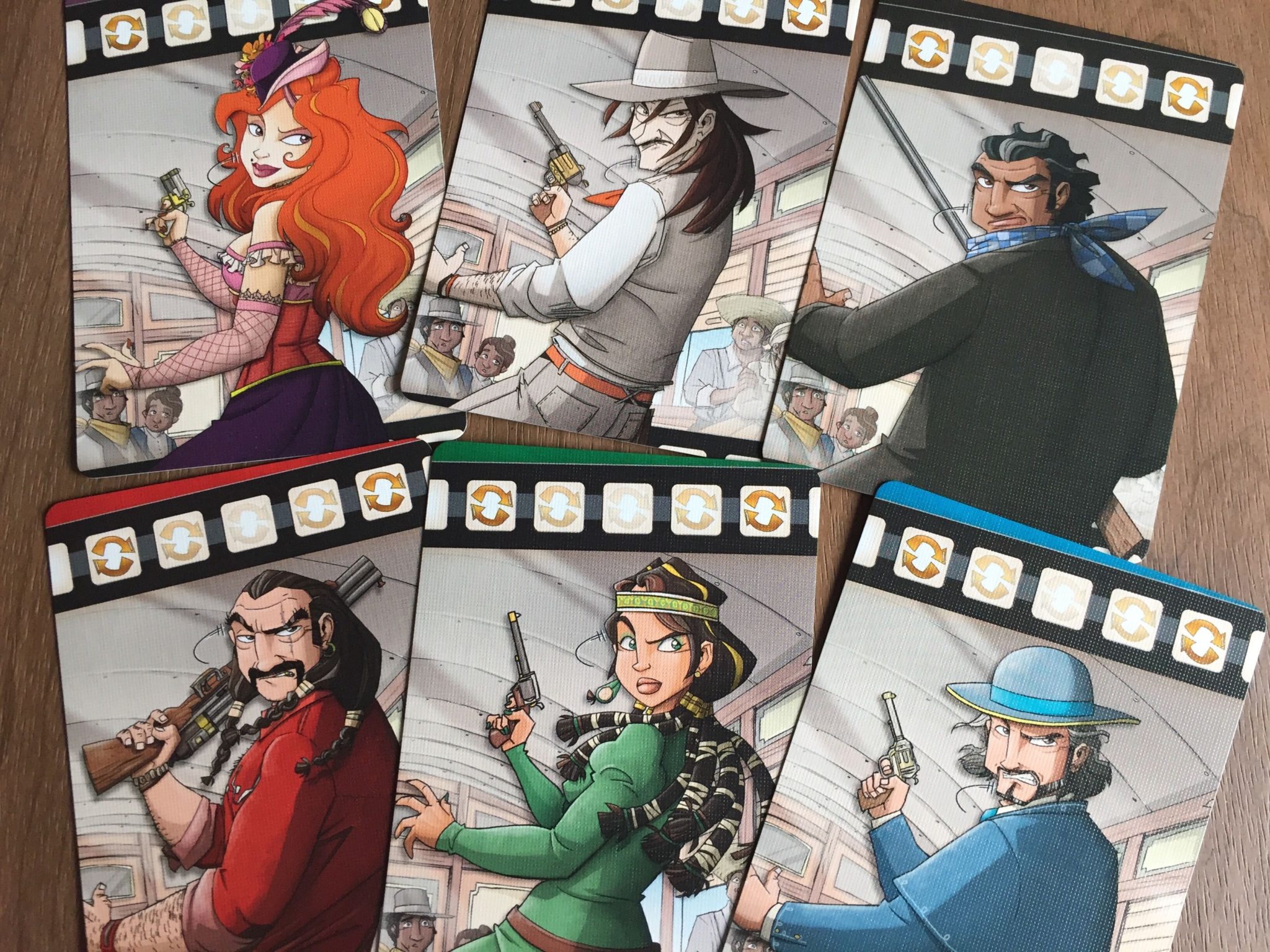 In the end it’s not a bad little programming game, if you don’t mind having one or more of your three actions nullified each round and the art doesn’t bother you. In my opinion however, I’d rather let this train pass me on by.

In the end it’s not a bad little programming game, if you don’t mind having one or more of your three actions nullified each round and the art doesn’t bother you. In my opinion however, I’d rather let this train pass me on by.