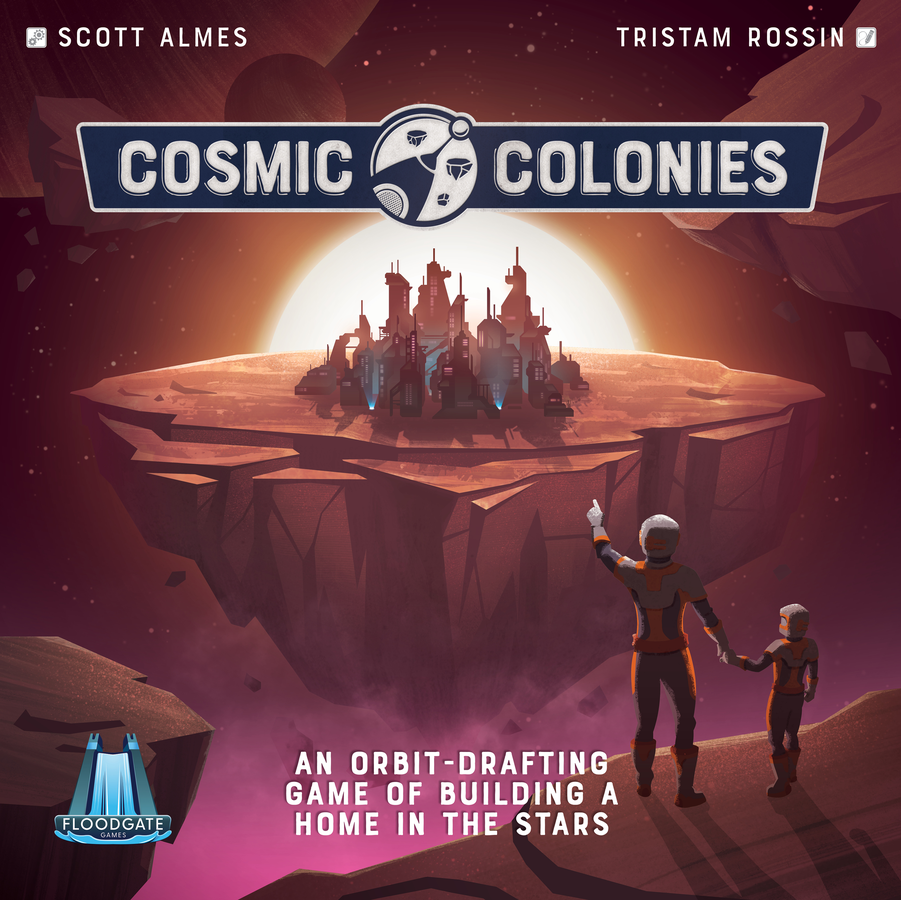 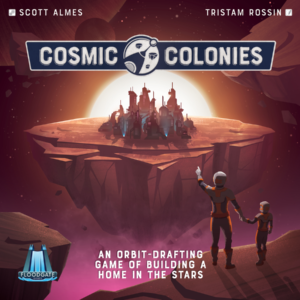 Cosmic Colonies is a game of card drafting and tile laying. In this new release from Floodgate Games, players are cosmonauts trying to colonize distant asteroids. It is a light game, great for families, but it offers strategic options that can keep experienced gamers interested, too.

I have a confession to make: I have never played any of Scott Almes’ Tiny Epic games. I would very much like to, but I have just never had the chance. That said, I have really enjoyed some of his other designs, so I was stoked to check out Cosmic Colonies.

In this game, players are space explorers working to establish settlements in the great unknown. Each player has an individual tableau board, representing the asteroid they are trying to colonize. 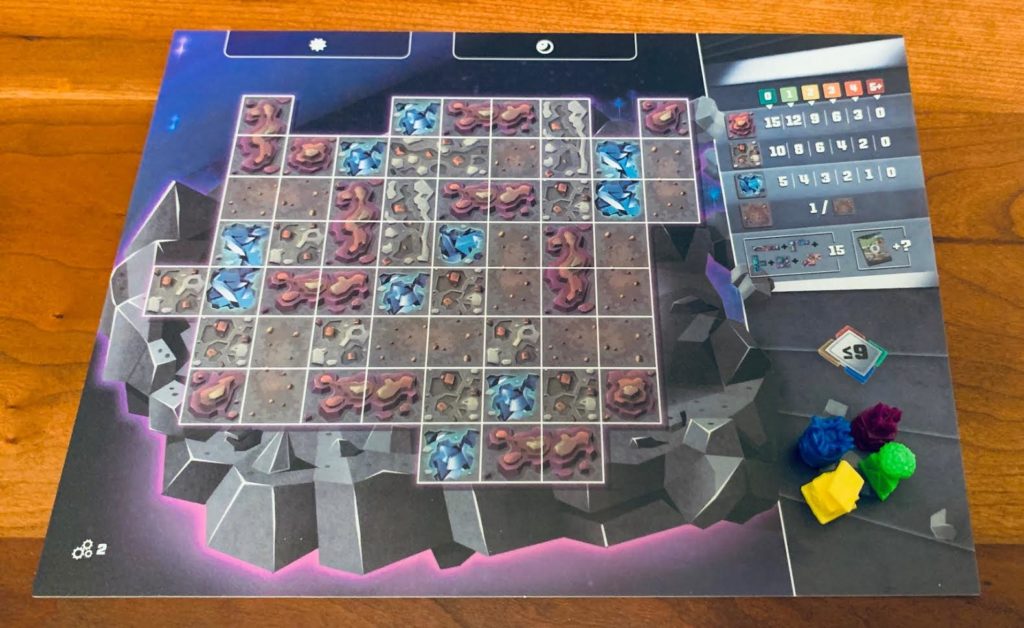 The boards have a standard and an advanced side. I always prefer the advanced game.

Everyone begins with 1 of each of the 4 resources, which are represented by cool, plastic bits. In the central play area is a board which houses the resource depots and tile market. 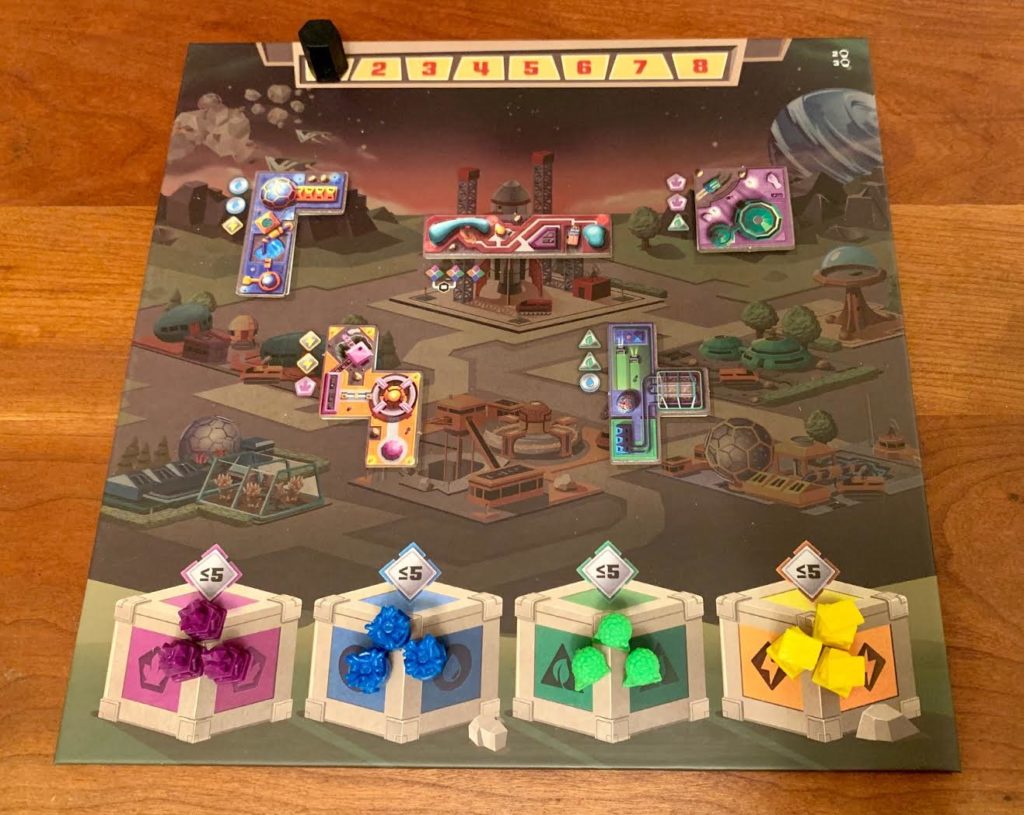 Setup for a 3-player game.

The game is played over 8 rounds. In each round, everyone plays and resolves a card from their hand, and then they all play and resolve a second card. The cards are numbered 1-20, but depending upon the number of players, they may not all be used. Below is a sampling of the cards: 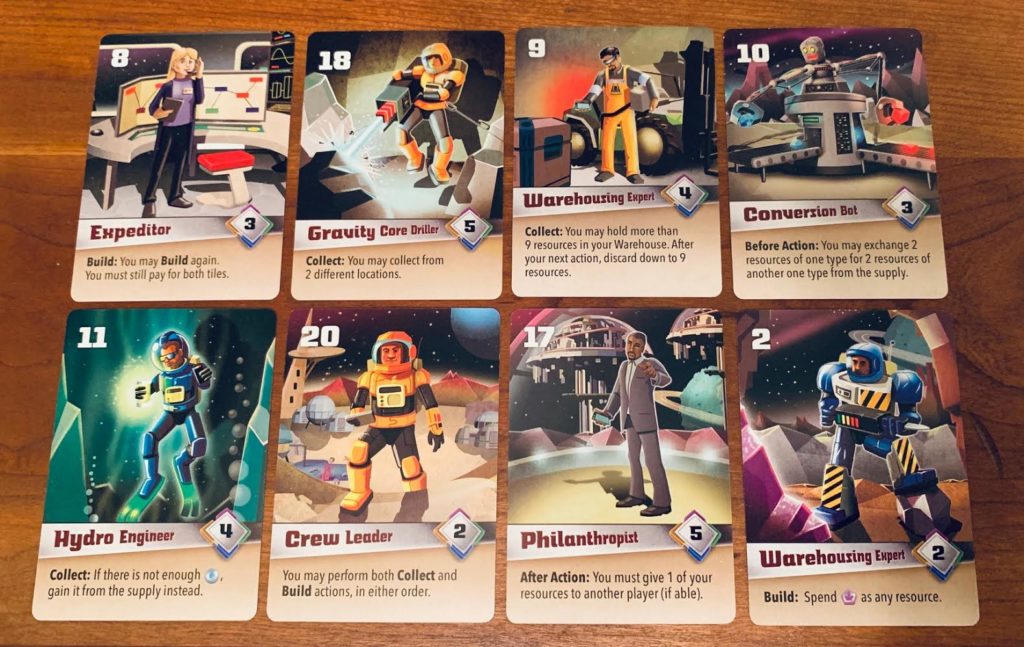 Everyone starts with a hand of 4 cards. Each card has a rank (the number in the top-left corner), which determines the order in which they will be played. When everyone has chosen the card they wish to use, they simultaneously reveal them and resolve them in order from the lowest number played to the highest number. As an example, if the cards played were numbers 19, 8, and 10, the order of resolution would be 8-10-19.

Cards can either be used to gain resources or to purchase tiles. Each card has a “Carry Limit” (the number shown in the diamond), which indicates how many resources the player can take. Resources have to come from a single depot, so if someone played a card with a Carry Limit of 3, they could take 3 yellow resources, 3 greens, 3 blues, or 3 purples.

They also usually include special abilities that allow players to perform an action differently/better than normal. For example, a card might allow players to spend purple resources as any color, or to buy a tile at a discount.

Instead of taking resources, players can spend cards to purchase tiles from the market. Each tile has an associated resource cost (e.g. 2 blues and 1 yellow or 2 purples and 1 green). To buy a tile, a player spends the required resources and adds it to their board. Eventually, players’ boards will start to look something like this: 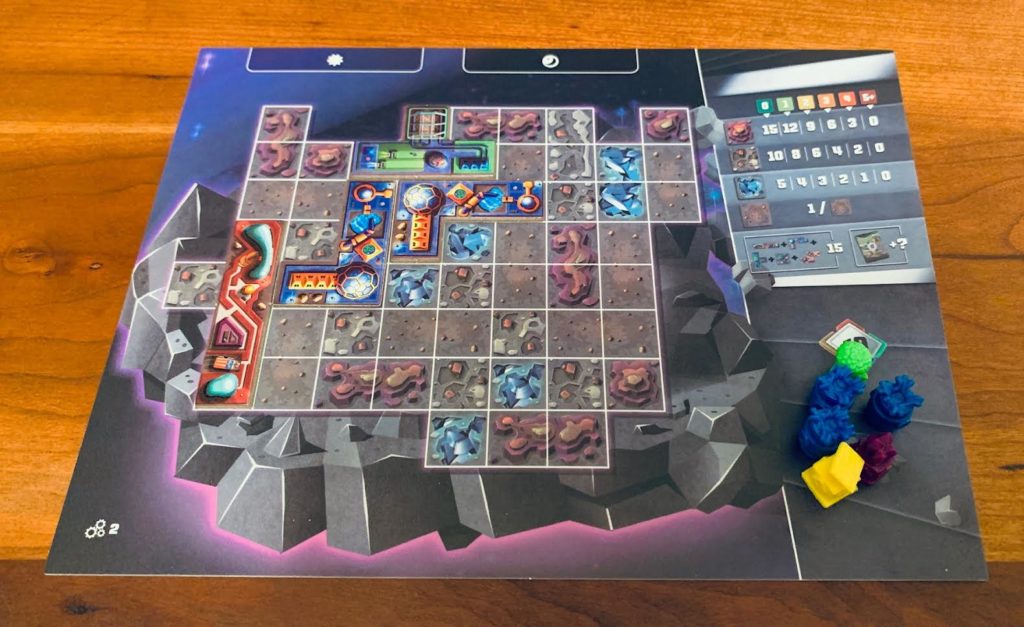 This brings up the game’s scoring system. Players earn points from 3 things:

The asteroid boards have different types/colors of terrain, and the more rocky terrain that players can cover with tiles, the more points they will score. Ideally, players want to cover every rocky space, but this is decidedly tough to do, so it creates an interesting spatial puzzle. Each player also has a private objective, which makes 2 types of tiles score extra points for them.

At the end of each round, after all players have played 2 cards, everyone passes the cards they used to the player on their left. This means that from the second round on, players’ hands will consist of the 2 cards they did not play last round and the 2 cards their neighbor just played.

Play continues until the end of the 8th round. At that time, scores are tallied and the player with the most points wins!

Cosmic Colonies fits the family game genre very well. It is easy to learn and it plays in about a half hour, but its decisions are interesting nonetheless. There is very little room for AP, since players only ever have 4 cards to choose from, but they still have to think about which cards to use, what order to use them in, and what to use them for.

There is also the interesting nuance that whatever cards players use get passed to their opponents. This reminded me of the card passing in Onitama; players have to choose whether to hold a card and not use it, so as to keep it from their opponent, or to use it, but in doing so allow their opponent to use it too. It’s subtle, but clever.

The game offers an “advanced” version as well, which I highly recommend trying. In this variant, the cards each have 2 options: a Day and a Night action. The first card played is used for its Day action, and the second one for its Night action. This simple change ramps up the strategy significantly, because it puts more importance on the order of card resolution. 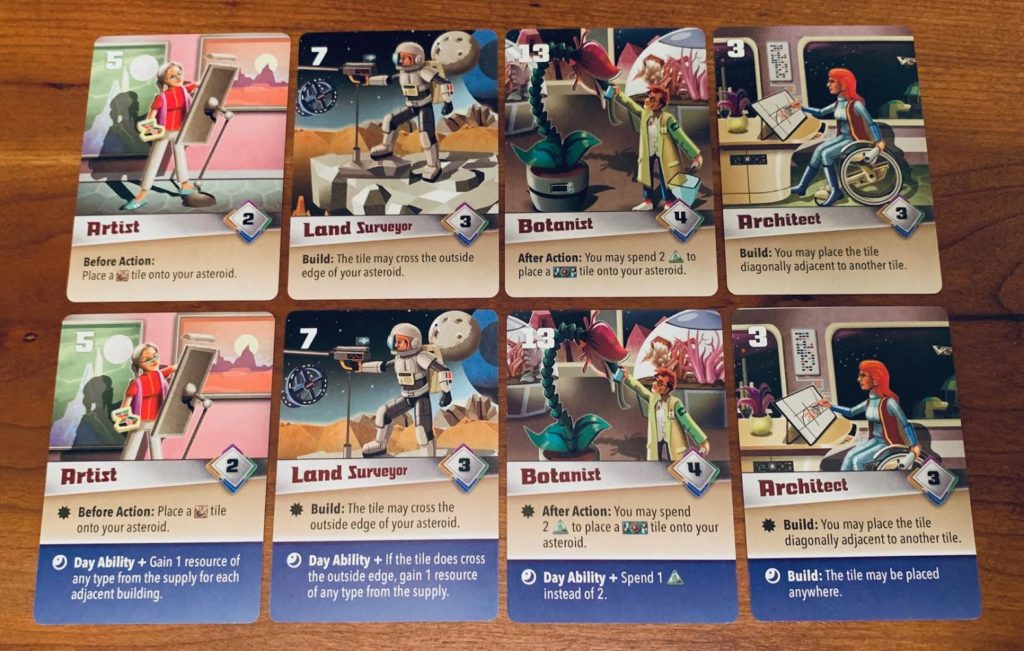 Also in the advanced game, players can earn points by leaving non-rocky spaces uncovered. This makes the spatial puzzle much trickier, since players want to cover many spaces, but leave others empty, all the while trying to get complete sets of tiles and collect the ones that advance their private objectives.

The game’s production is nice, particularly the plastic resource markers and asteroid tableaus. Both have a vibrant look and a pleasant physicality. The rulebook is a breeze, and it explains everything nicely. All in all, Cosmic Colonies is another high-quality release from Floodgate, following the lovely Sagrada and Bosk. Recommended for fans of light drafting and tile-laying games.

A review copy was provided by Floodgate Games.