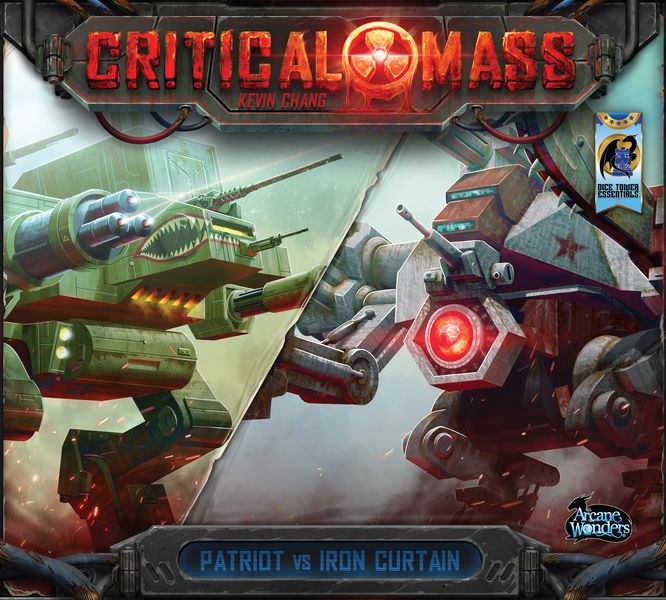 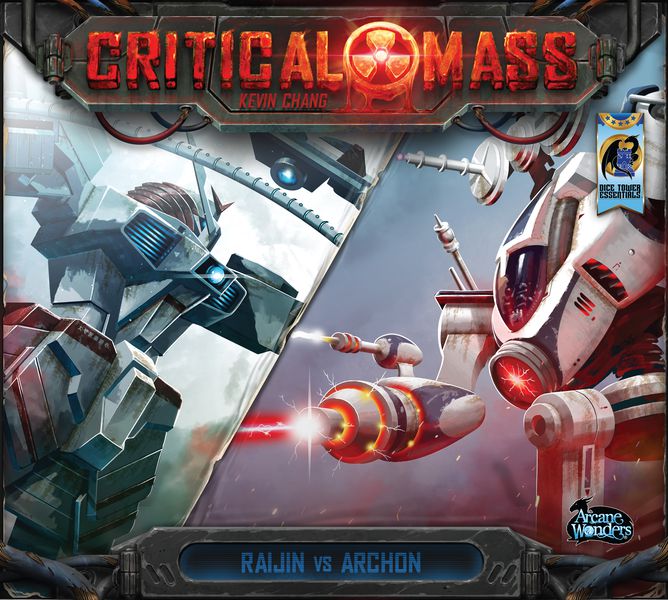 In Critical Mass, two players go head-to-head in a battle of ‘Mechs in a futuristic war-torn Earth. Several major countries and corporations survived the initial onslaught of nuclear weapons, and now they use their behemoth metal machines to wage war. There are two separate boxes that can be purchased of Critical Mass, each with everything two prospective ‘Mech pilots would need to settle their differences in battle. I’ll talk a little about each of the 4 different ‘Mechs, but the core game system is the same in both. Read on to see if this is a ‘Mech fighting game worth taking for a spin.

Violence: All of the game art is of the equipment itself, never the pilots. No blood or people are even shown.

Language: One of the weapons is a laser platform called the “Hellfire Cannon.” No spiritual correlation is mentioned—the weapon does fire damage. 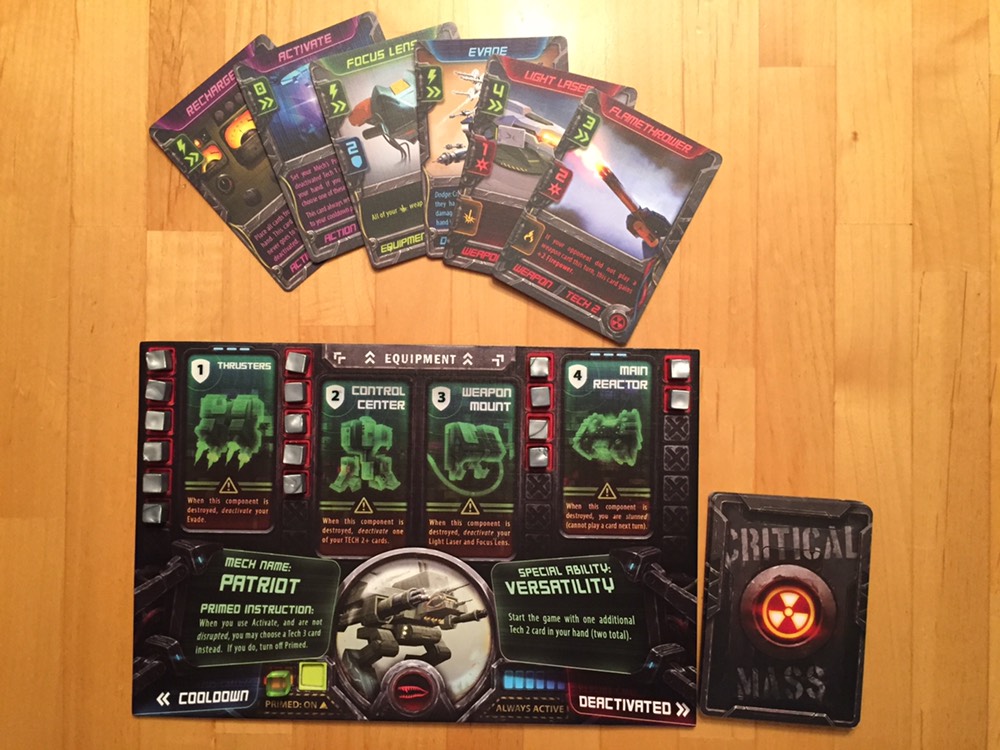 Giant robots fighting have become such a part of the pop culture that all I had to do was hear the elevator pitch for Critical Mass and I was interested. Arcane Wonders has taken the genre and set it in a two-player game where you can customize your ‘Mech’s loadout and upgrade your hand on the battlefield as you whittle down your opponent’s armor. Armor on each player board is represented by small, metallic-looking cubes which slot nicely into the player boards, and protect your core components. Run out of armor on any one of those components and you’ll suffer the consequences, including discarding cards or becoming stunned. The first player to destroy all the armor on an opponent’s ‘Mech is the winner. 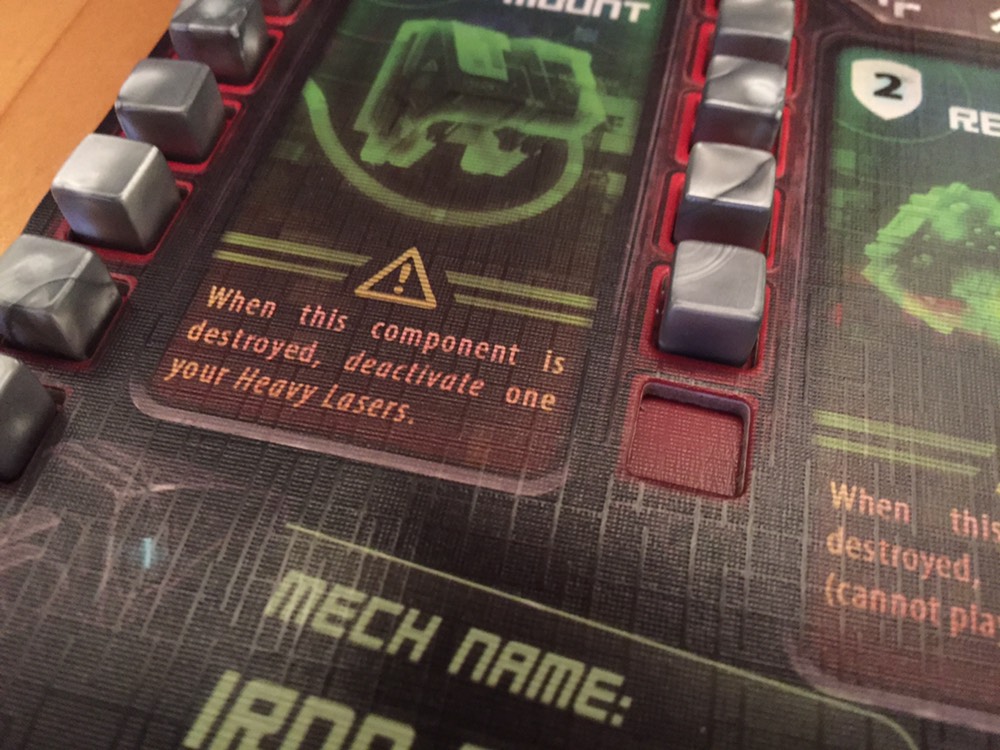 Each player has a set hand of cards that they start with, and have in their “Deactivated” pile. They also get another group of cards from the Tech 3 and Tech 2 tiers that can be customized and changed each game (the higher the Tech, the better it is). In order to access these powerful cards, players must play their “Activate” card, which lets them choose a Tech 1 or 2 card from the Deactivated pile and set their ‘Mech’s special ability to “Primed” if they took no damage this turn—if they take damage, they have to choose one or the other. If a player plays “Activate” while their ‘Mech is already “Primed”, they may choose a Tech 3 card—the most powerful cards in the game. Action takes place simultaneously, with players comparing cards to see which one happens first and if either is a miss or disrupted. 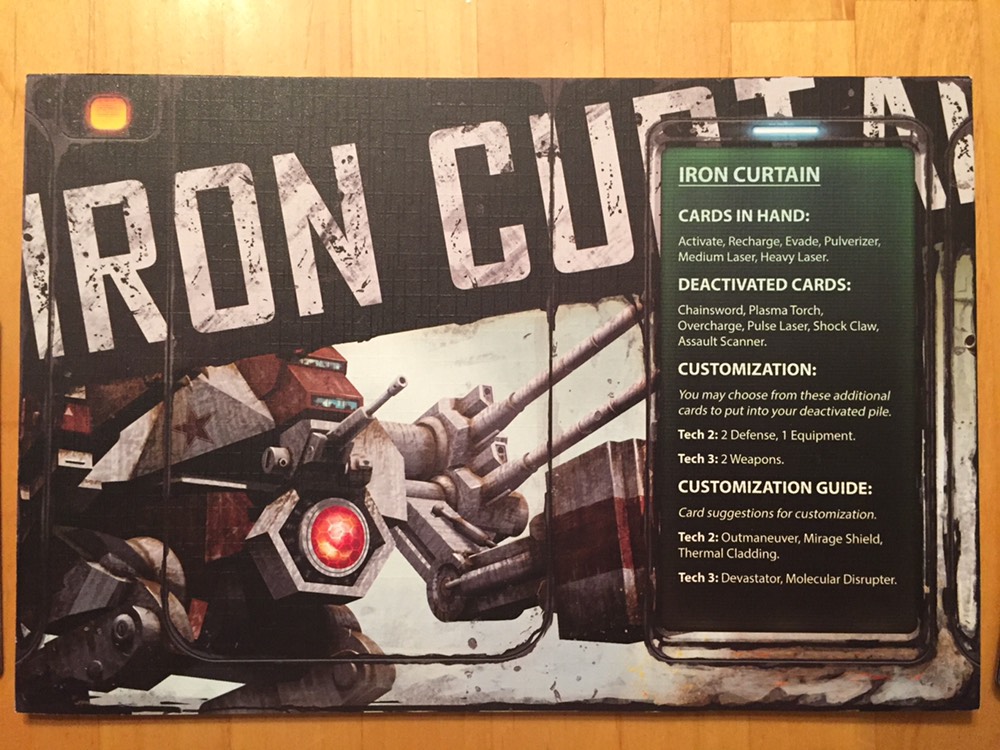 The back of the player boards have the list of cards you’ll start with, including loadout suggestions.

If it sounds like there’s a lot to keep track of in Critical Mass, you’re not wrong. Your ‘Mech’s health, available cards, equipment, special abilities, and “Cooldown” (discard) pile are all on your tableau. It’s a fairly easy to explain but not easy to master—my first few rounds I kept having to remind myself to apply the bonuses from my equipment cards, which can make a powerful difference in the battle. My biggest concern here is that with the plethora of options in setup and each game turn, some players will melt under Action Paralysis. If you or the person you usually play with have trouble deciding what to play, keep this in mind. 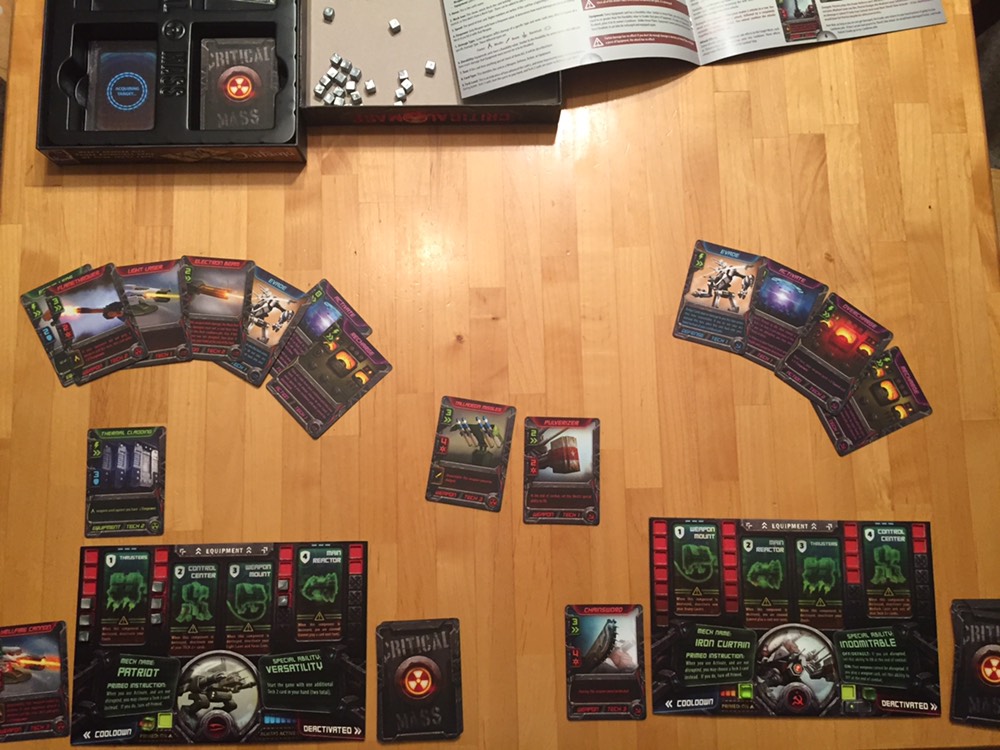 A two-player game, turned side-by-side for the picture. In the middle are the cards being played this round. Patriot’s missiles are going to hit faster, disrupting Iron Curtain’s attack.

Each box of Critical Mass comes with two different ‘Mechs, each with their own starting cards and special abilities. It feels like each box is supposed to be a yin and yang of each other. For instance, one box is Patriot vs. Iron Curtain. Patriot is a walking Abrams tank painted like a P-51 airplane, representing what’s left of the United States. Patriot gets an extra Tech 2 card as a passive ability. Iron Curtain is a plodding Soviet war machine, protecting Mother Russia; it has the ability to not get its next attack interrupted.

The other box is Raijin vs. Archon, from Japan and Antarctica respectively. Raijin can play extra cards when its special ability is on, whereas Archon has a recharging force field, the only ability to restore armor in the game. What makes it feel truly overpowered is that if Archon has any cubes left on its force field, the opposing player must deal at least one damage there first before passing out damage to any other parts. Normally players can choose where ever they want to distribute damage between the enemy’s main components and equipment. This combination of abilities led me to dub Archon the “Oddjob” of the available machines. 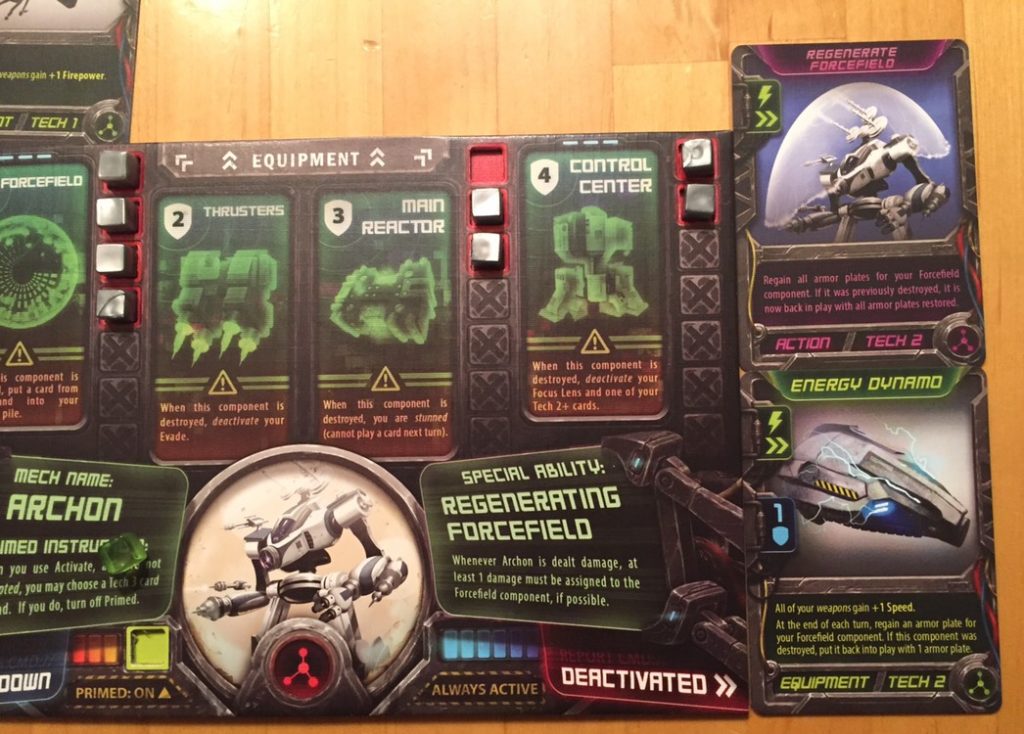 Archon’s special ability means his enemies have to damage his forcefield at least once before anything else—and his Regenerate Forcefield restores it, while his Energy Dynamo will restore one cube each round.

Both sets of Critical Mass come with cards that are specific to each ‘Mech, and a larger pool of shared cards to draw from. There are multiples of each card, so no one is fighting over the same powerful Tech 3 upgrade, and the futuristic weapons and equipment is eye-catching. I only noticed on some of the lasers did the art seem re-used. The cards and player boards were a nice thickness and quality, and while I noticed a slight warping in one of the player boards, it wasn’t enough to be bothersome, and could easily be fixed. 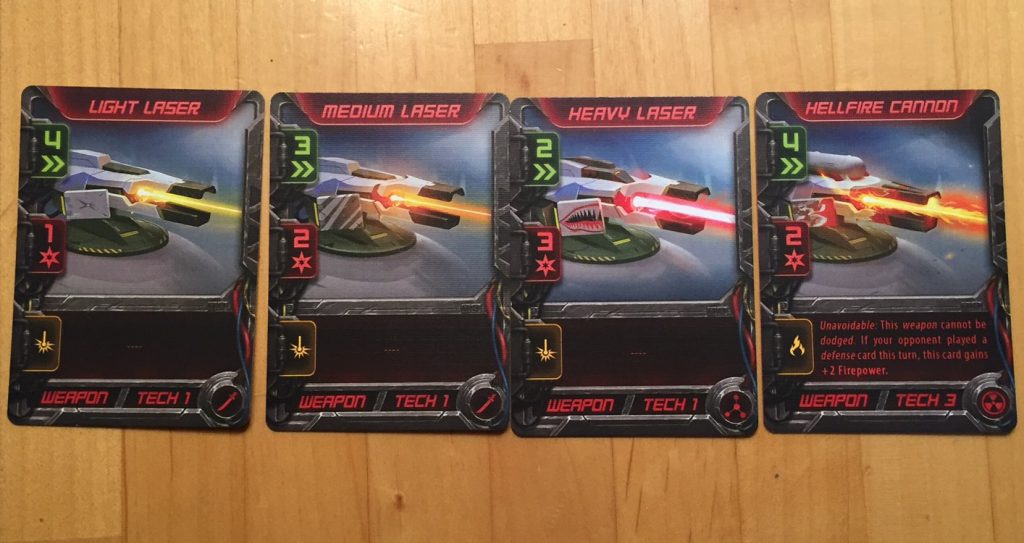 Critical Mass is a quick, enjoyable two-player game that could easily be a four-player game with both sets. I hope that this series takes off and Arcane Wonders is able to release more sets, because that would be a lot of fun. Balancing issues and some minor grievances aside, this is one that I’ll make room for on my shelf. If you’re a fan of Mechwarrior, Titanfall, or movies like Pacific Rim, you should definitely give this game a look.

If you're a fan of 'Mech fighting games, or are looking for a 2-player game with more choices and weight than most, you'll want to check out Critical Mass.