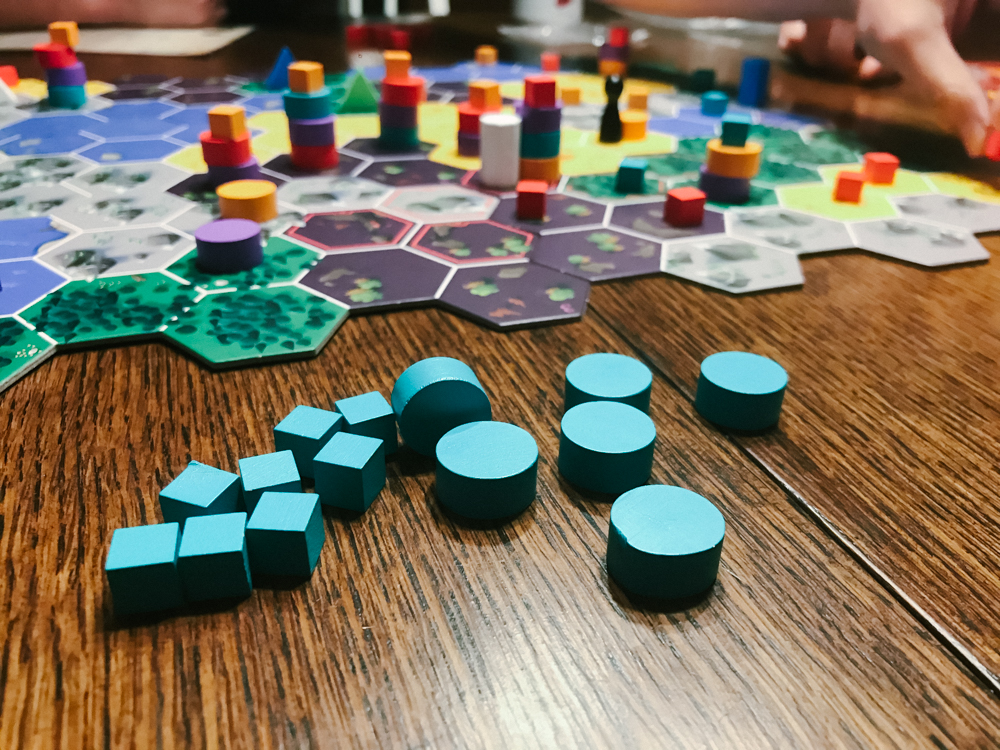 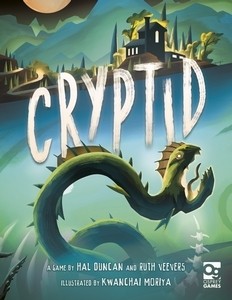 Cryptid is a zoological hunt featuring 3-5 players as cryptozoologists, seeking some sort of mysterious creature’s habitat in the wilds. This is the first published design of design team Hal Duncan and Ruth Veevers. Illustrator, Kawnchai Moriya, is responsible for artwork from other titles like Dinosaur Island, The Game, and Kodama: The Tree Spirits. 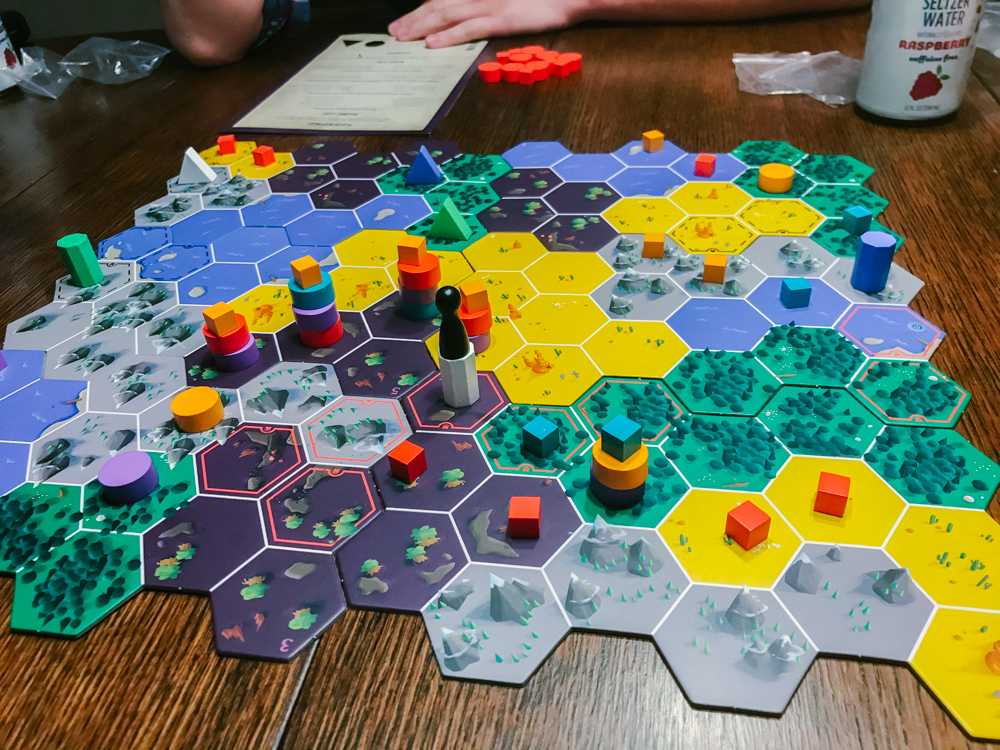 Cryptid looks so good on the table.

Cryptid is a witty deduction game featuring pretty cubes and discs, confused players masquerading as cryptozoologists, and an unknown creature sneaking about in its habitat.

Each setup is fairly randomized depending on player count and how difficult players want their experience to be. Six modular boards are setup according to clue cards or the online randomizer interface. Each hex represents a type of space—be it water, mountains, forests, etc. Certain areas might also be within bear or cougar territory. Finally, setup indicates other spaces to hold standing stones or abandoned shacks. Players are tasked with finding the only hex on the board where the Cryptid’s habitat could be located.

To start, players are given one secret clue of true information. This might be, “the habitat is within one space of water,” or, “the habitat is two spaces away from cougar territory.” Before taking turns, players must place one of their own cubes anywhere on the board where their clue indicates the habitat cannot be. This is a critical moment, as each player must create a mindmap of all intermingling features on the board while intaking information given by each cube placement.

On your turn, you may either question another player, or search. To question, pick a player, pick a space on the map, and ask the player if the creature could live there. A simple question, sure—but by asking it, the accused must place a cube or a disc. We know what cubes do, but if a space holds a disc, it means that player’s clue makes that location a possible suspect for the Cryptid’s habitat.

Cutesy discs and cubes to toss onto the map, hoping for answers.

Questioning is the meat of the game, but players can also take the “search” action to make a huge guess and try to end the game. Pick a space and drop your disc there. Going around the table, players must place a disc if the space corresponds to their clue, or a cube if it doesn’t. If any player drops a cube, the game continues, but if all players drop discs, congratulations! You are the real cryptozoologist at the table.

These mechanics make Cryptid such a joy to play. Players spend each round thinking about their own clues and what their opponent’s clues might be. In early turns of Cryptid, players are sort of pseudo-cooperatively investigating. At some point, usually after the first search action is taken, all ties are cut and players desperately make a bid for their own gain.

Of course you don’t really feel like a cryptozoologist when playing Cryptid, but you certainly do rack your brain and fill it with dozens of possibilities—especially on the advanced difficulty (which adds an additional color of standing stones and campsite, as well as more difficult clues).

For three rounds of play, you might be entirely convinced the habitat is next to a water space. A turn later, you have a hunch it’s next to water and within a few spaces of bear territory. Finally, you make a search on the space in an area you’ve been suspecting. The next two players drop their discs, and you grin. It’s all down to the last player now… But he drops a cube. One rule I didn’t mention is whenever you make a player place a cube somewhere, you must also place a cube. This critical search gives away your clue, and within the next two turns, one of your opponents figured out the space.

Cryptid is great because games are short and there’s practically no down time. Players feel engaged the whole way through and each play matters. I brought it to a gaming weekend and it was almost always on the table. People dig this game. They love the abstract deduction and they love how fast it plays. Furthermore, you feel like a genius when you can nab the habitat location after just a few rounds.

Unfortunately, Cryptid is extremely fragile. While you only need to remember your own clue, it’s easy to get it mixed after playing a few games. Some clues feature wording like, “your clue is not within a space of swamp.” This is hard to remember sometimes as you have many thoughts running through your head. A clue like, “the habitat is within two spaces of desert” means the habitat could be on a desert space, depending on how large that area is. If a player mixes up his clue once, it either breaks the game immediately, or gives away something important. Luckily, games are short, so you can just start over—but it’s a bummer when you’re 15 minutes in and about to solve the game.

I’m on the culling binge in my collection lately. I need more space and I love trading games into my FLGS for in-store credit so I can start picking up more expensive titles or RPG books. Cryptid is so fun and engaging that it’s going to keep a space on my shelf for a long, long time.

Though it’s a challenge to teach to new players initially, it’s worth working through. Figuring out the habitat location is so satisfying and it’s a joy to see other people figure this game out.

Continuing Osprey’s streak of excellence, Cryptid is 100% worth picking up.

A review copy of Cryptid was provided by Osprey Games.

Cryptid is a strong deduction game and gives tons of reasons to bring it back to the table.