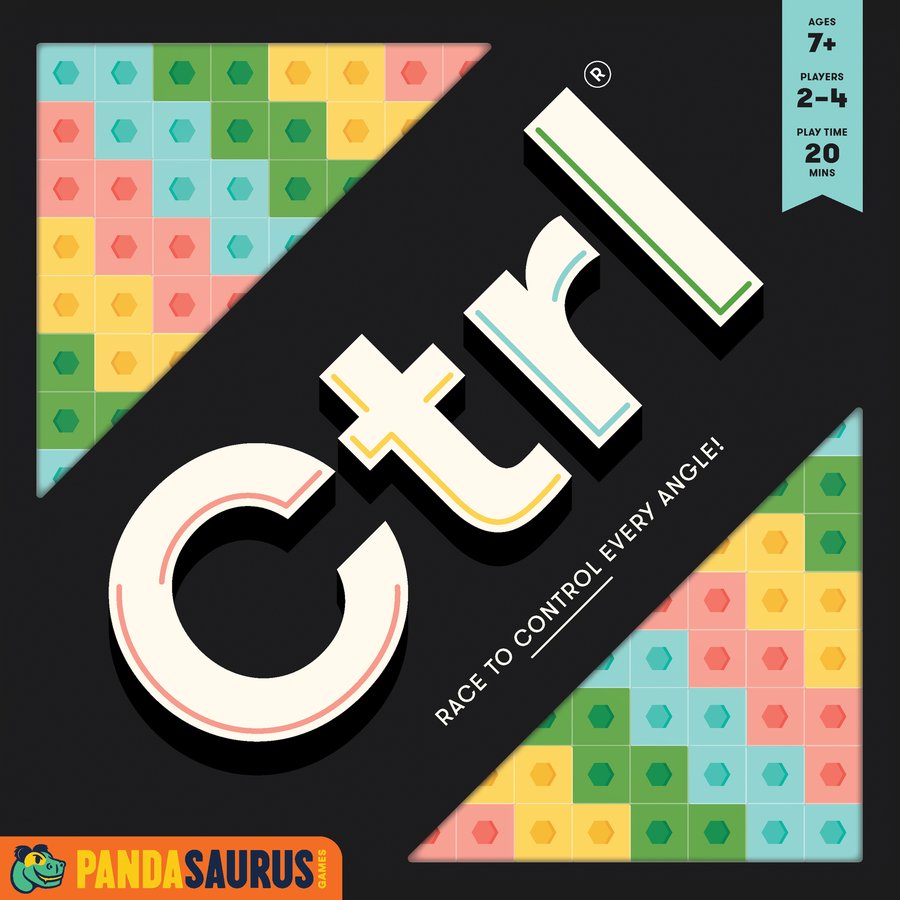 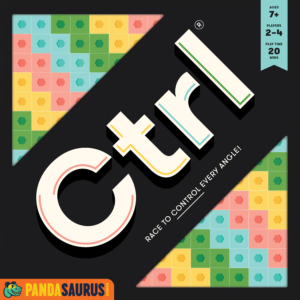 Ctrl is a 3-dimensional abstract game with cool, interlocking building block pieces. In this game, players take turns adding 3 blocks to the tableau, in an effort to cover their opponents’ pieces and make theirs visible. With a great production quality and an amazing “toy factor,” it is a fun and tricky game for a wide variety of tastes.

Ctrl is basically a box of toys with a game on top. When I first opened it, I haphazardly tossed the rules aside and spent a solid 20 minutes playing with the pieces. 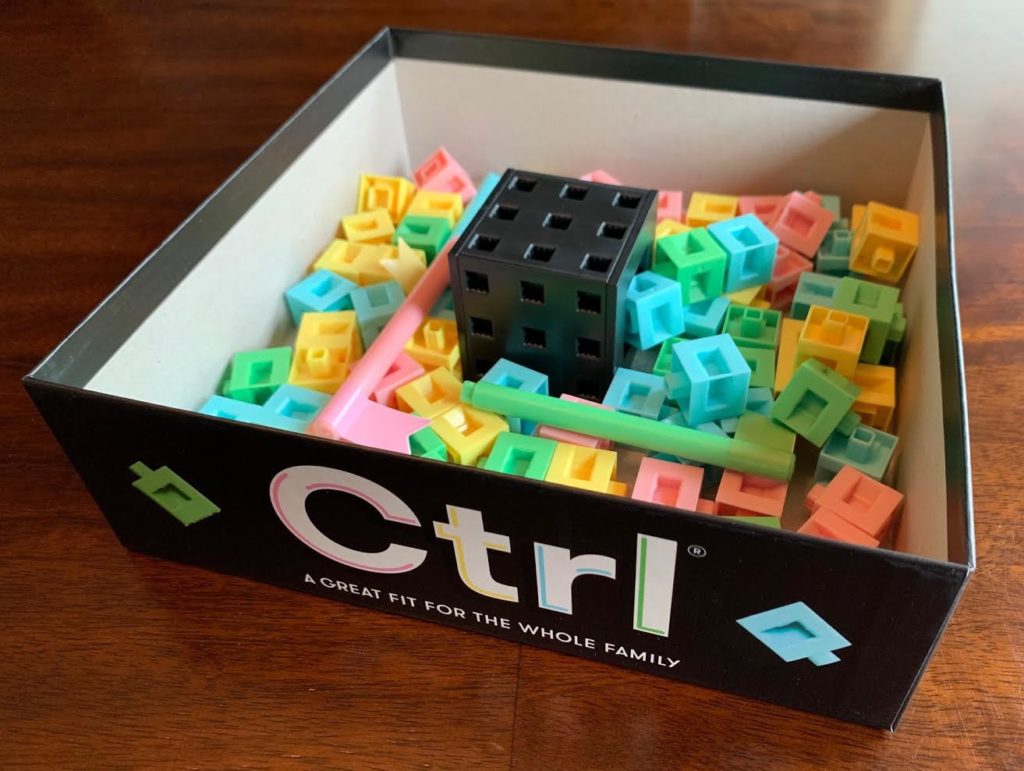 This 3D game of area control (or “ctrl,” as it were) is an interesting spatial puzzle. Players strategically place pieces such that they can be seen from as many vantage points as possible. In other words, as the tableau expands on 5 sides, upward and outward, players try make their blocks visible from multiple angles.

To begin the game, each player receives the blocks and flag piece in their color. 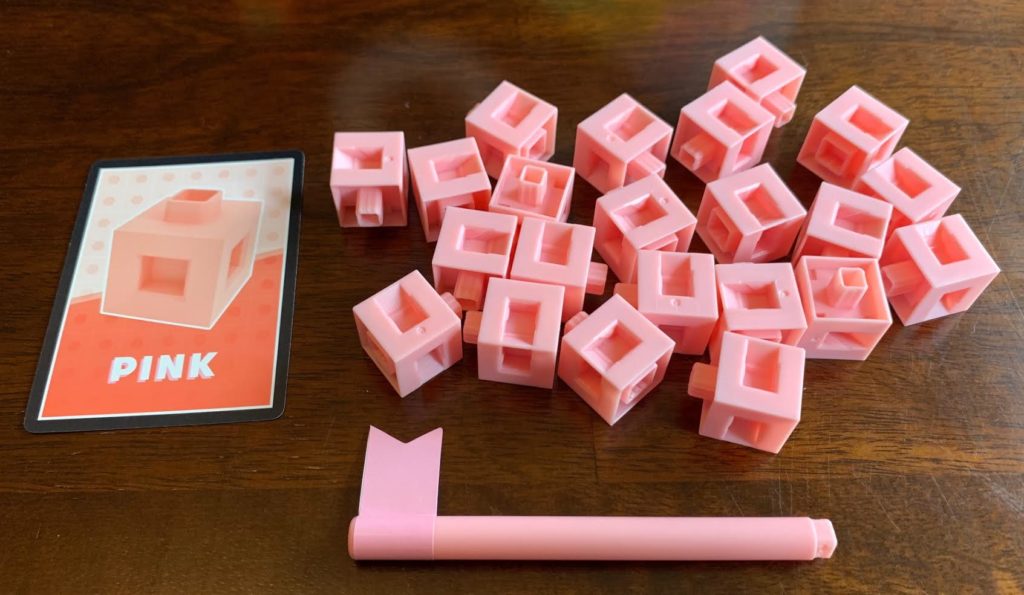 Everyone then places a starting block and their flag on the base cube. 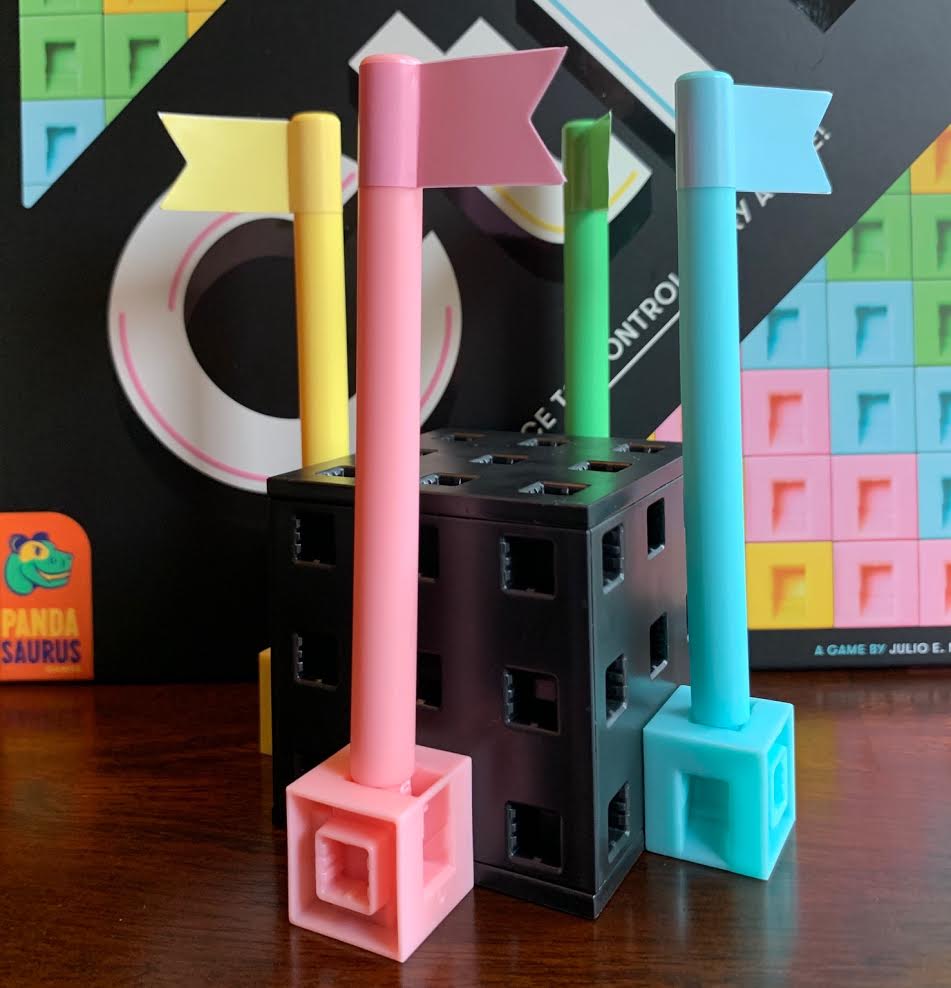 To play the game, players take turns adding 3 blocks to the tableau. Players’ blocks must always be placed next to existing ones of their color, meaning that their influence will constantly grow as their pieces “creep” around the formation.

The first block placed each turn can move “away” from the center cube in 3D space, but the others must be placed in a straight line from it, “rolling” around corners and “climbing” over other pieces as necessary. 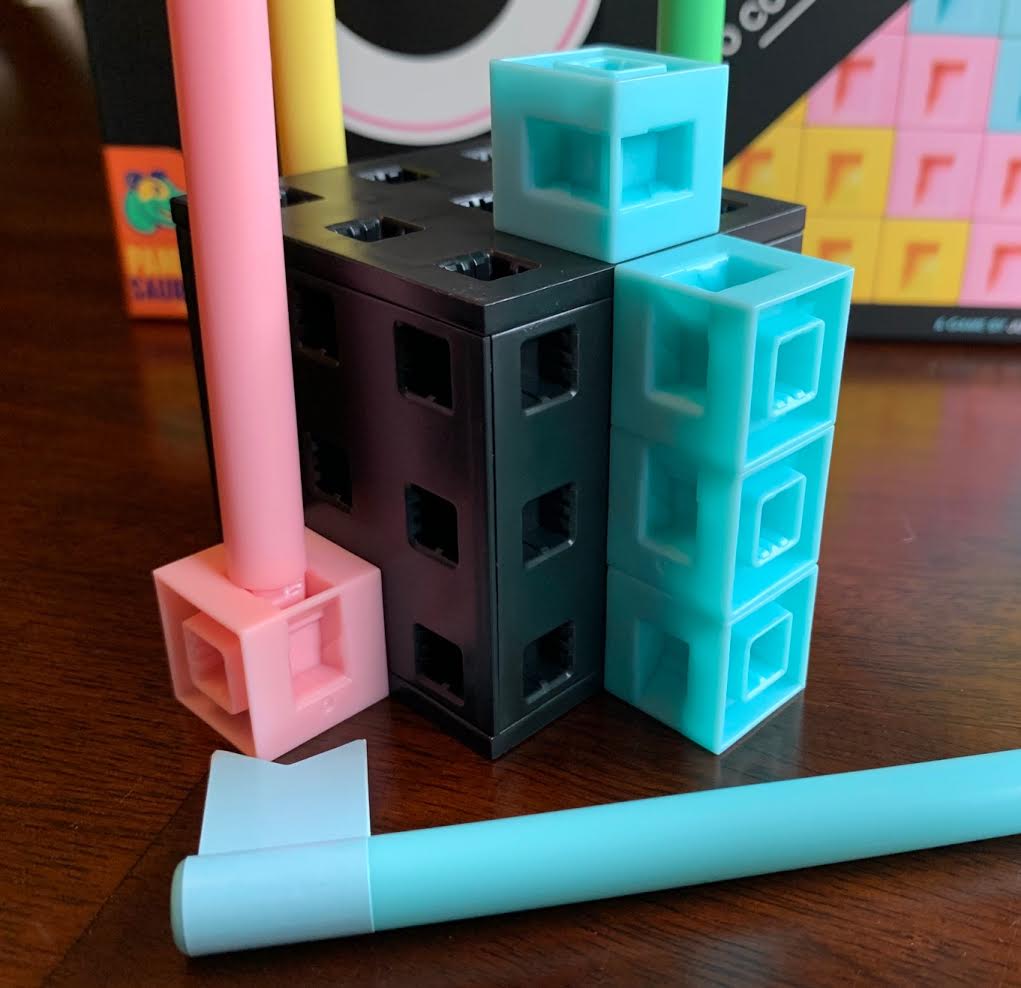 On the blue player’s first turn, she placed her 3 blocks straight up the center cube. Notice how her third one rounded the corner.

What makes this game particularly interesting are the flag pieces. At the end of each player’s turn, after all 3 blocks have been placed, the player inserts their flag into any block of their color. Flags can point in any direction except downward, and they remain there until the start of the player’s next turn.

In essence, flag pieces block a line of spaces from being claimed. They can either be used offensively, to keep opponents from placing blocks in spaces they might want, or defensively, to “reserve” spaces for a future turn. 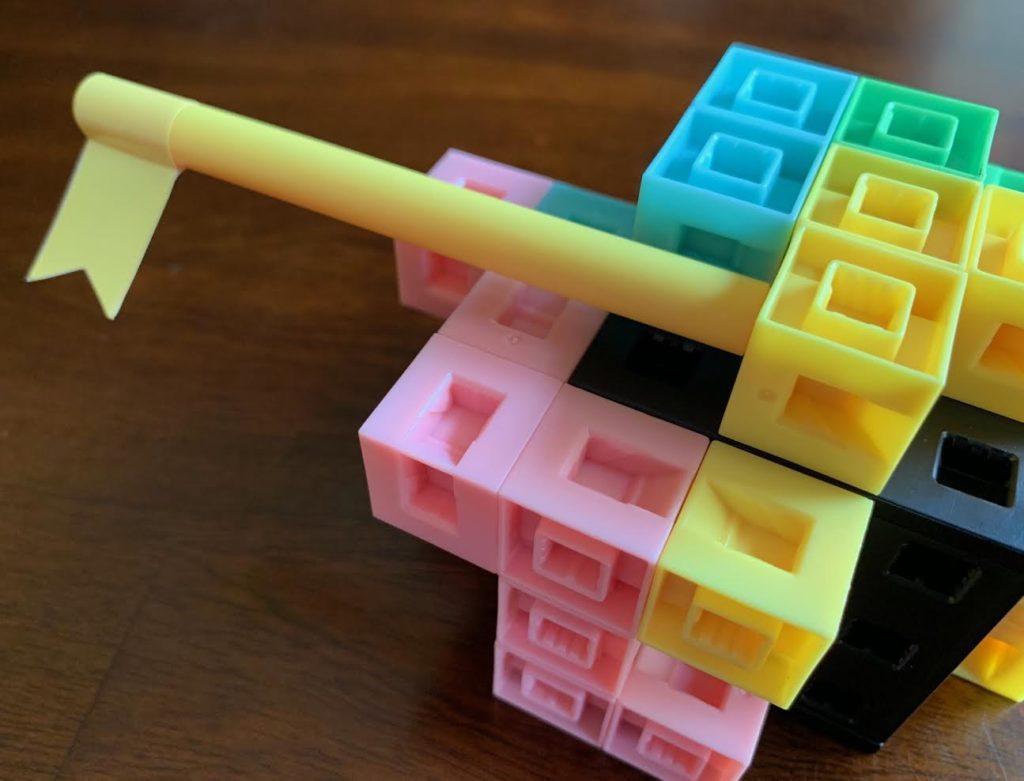 Here, yellow has placed his flag so as to keep blue and pink from expanding through its spaces.

Play continues in this fashion until all blocks have been placed. At that time, players examine each side of the formation, including the top, and count the number of blocks in each color that they can see. Each visible block earns its owner 1 point. (Flag pieces obstruct blocks behind them for the sake of scoring.)

As an example of how scoring a side might look: 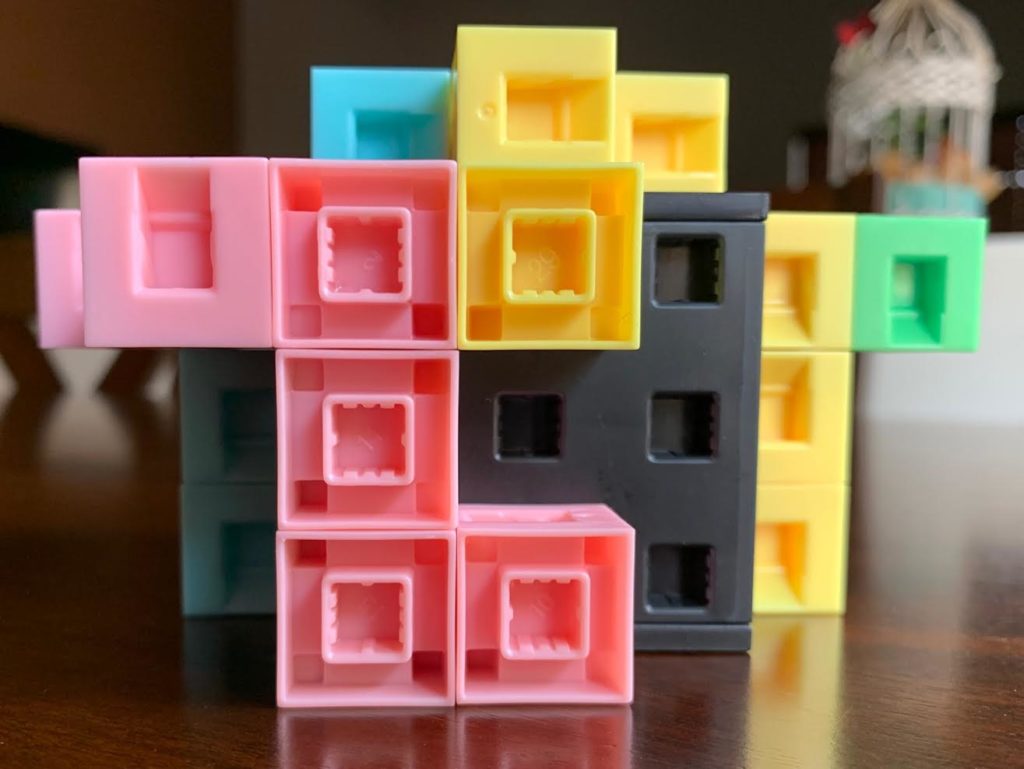 Here, pink and yellow would each earn 6 points, blue would earn 3, and poor green would only earn 1. (Of course, there would normally be many more blocks and flags in play, but this is merely to illustrate how scoring works.)

When all sides have been counted, the player with the most points wins!

Ctrl offers 3 things I really love in games: a strong toy factor, 3-dimensional gameplay, and a tricky spatial puzzle. This game reminds me a lot of a semi-obscure older game called Pueblo, except that in that game, players do not want their pieces to be visible. (I saw that Tom Vasel also made this comparison; I suspect any reviewer who has played Pueblo will, as well, since the games have such a similar core concept.)

Ctrl looks and feels great. The blocks are big and chunky, and generally speaking, they stay together pretty well. Occasionally, a section might fall off if someone bumps the structure the wrong way, but this has not been a big issue for me.

It’s cool to be able to hold the game in your hand as you play, turning and observing it from different viewpoints to determine the best move. It almost feels like playing with a Rubik’s Cube. To this end, players prone to analysis paralysis can slow the game down slightly, but even so, it rarely takes more than a half hour from start to finish.

This game has enough plastic chrome to capture kids’ interest, but it also has enough strategic decision-making to engage adult gamers. As such, I see it as a strong choice for families. Kids and parents can play it together, and both sides will have a good time. If you like thinky puzzle games or games with lots of interaction, Ctrl is definitely one to check out.

I enjoy Ctrl. In addition to its amazing look and feel, it provides a thinky spatial challenge with a good amount of player interaction. I recommend this one, especially for fans of puzzle games or games with a strong "toy factor."