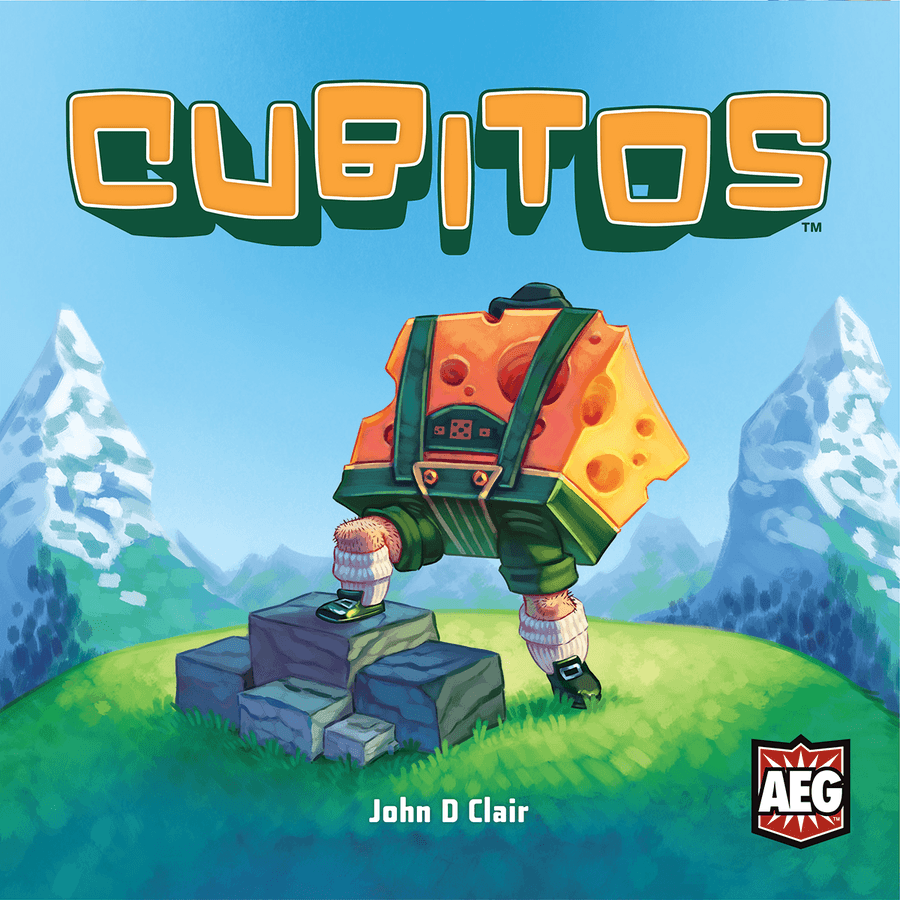 Cubitos is a push-your-luck game of racing and dice-pool building. In this game, players roll and reroll dice to move their racer figure along the track and perform special actions. Dice that come up blank can be rerolled, but a roll of all blanks is a bust! Ready for the race?

Cubitos is the latest release from AEG, and when I first heard about it, it sounded like a dream. A push-your-luck racing game with over 100 custom dice? What’s not to like?

In this game, 2-4 players are running a footrace in a bizarre cube-world. The goal of the game is, naturally, to be the first to cross the finish line. At the start of the game, players each receive a tableau board and a set of 9 gray-colored starting dice (7 light gray and 2 dark gray).

The racetrack and supplemental “fan track” are placed in the center, each with a runner figure in every player color. 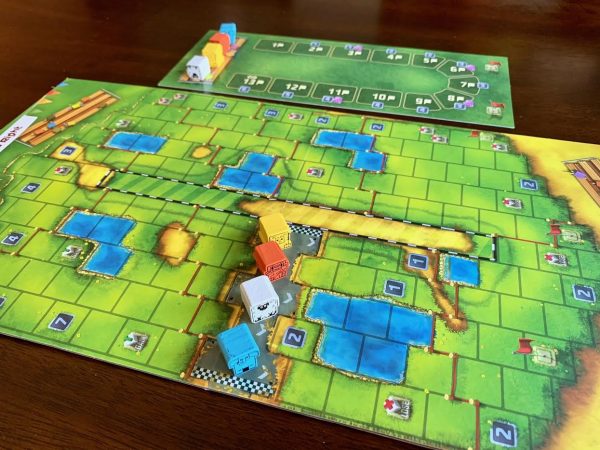 Nearby, upright boxes hold the various colors of dice…

…and a matching-colored ability card is dealt next to each box. The card determines which powers that color die will offer during the game. There are 7 cards of each color to choose from, which gives Cubitos a huge amount of variability 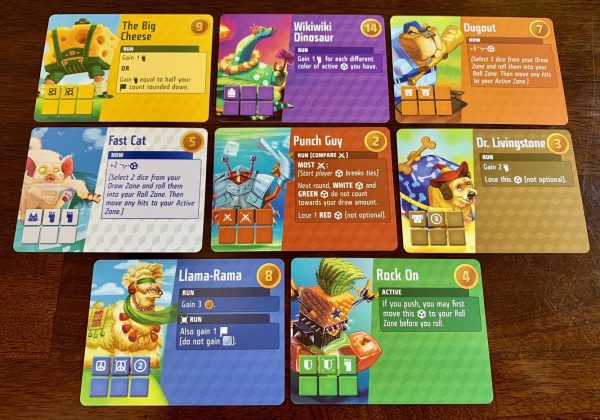 In this game, players take their turns at the same time. In the first phase of every round, each player rolls a handful of dice; the number of dice rolled is equal to the player’s “Draw” amount, which begins at 9. Any dice that show a symbol are moved to the “Active” area on the player’s tableau. 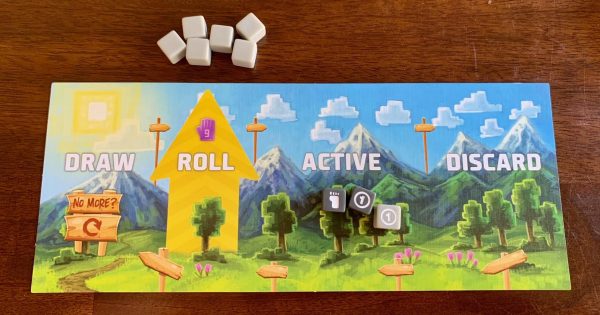 Then, the remaining dice can be rerolled if the player wishes. When rerolling, any dice that show a symbol are moved to the “Active” area. Players may continue rerolling blank dice as many times as they wish, but if a player ever rolls all blanks, they bust and fail the roll! When this happens, all dice showing a symbol are discarded and the leftover blank dice may be discarded as well, if desired. (Exception: a player cannot bust until they have rolled at least 3 symbols. This means there is no penalty for getting an unlucky, all-blank roll right away.) 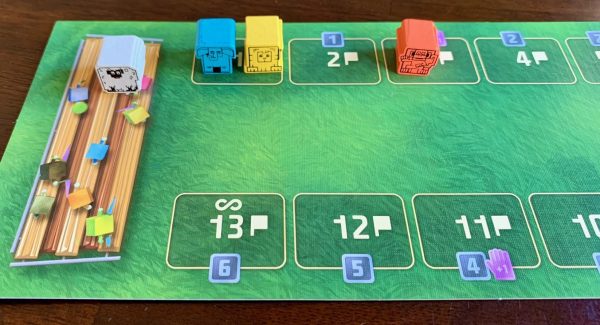 When all players have either stopped rolling or busted, the second phase of the turn begins, in which players get to use their active dice. Depending upon the symbol showing, active dice can be used to move a runner, activate a special ability, or buy new dice.

Unlike most race games, runners in Cubitos do not get in each others’ way; multiple players can coexist in the same space. The 4 racetracks included in the game bear different features, including water spaces, shortcuts, money spaces, “lose a die” spaces, and even a jetpack! 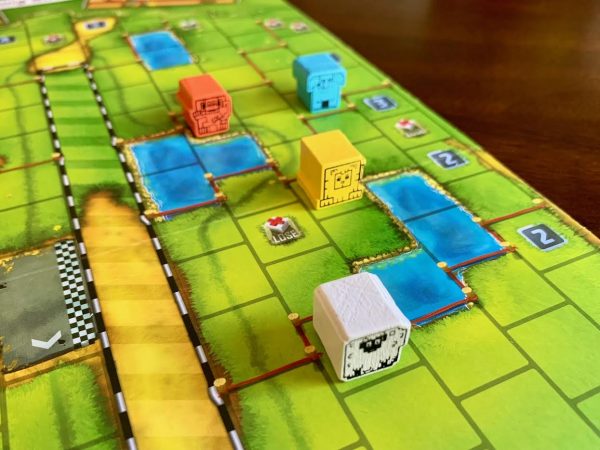 The game offers a slight boost to players who fall behind in the race. The board features a number of red lines, and for each line between a player and the person in first place, that player gets to draw an extra die.

The game continues in this manner, with players drawing, rolling, and spending dice, until a player crosses the finish line. The first player to do so wins! If multiple players cross the finish line on the same turn, the player who made it the farthest past the line wins.

Cubitos does a lot of things I like. For starters, all players play simultaneously, which means there is next to no downtime. Additionally, the push-your-luck and racing aspects have a strong synergy; players need to roll well in order to advance along the track, but they need to balance the desire for speed with the risk of busting. And of course, it’s just really fun to roll handfuls of dice.

I have seen numerous comparisons of Cubitos to the uber-popular Quacks of Quedlinburg, and indeed, these games do feel similar. In the same way that John D. Clair’s hit game Space Base seems to borrow from Machi Koro, Cubitos seems to borrow from Quacks. Some specific similarities include:

However, Cubitos adds some new ideas to the mix which helps to differentiate it from Quacks. Its shared board geography, for instance, makes it feel more interactive, even though there is actually little in the way of direct interaction. Moreover, the racing mechanism gives it an alternative flavor; combined with its stylized artwork, it feels zanier than Quacks. At the mechanical level, these games have a lot in common, but at the experiential level, they are different enough to each stand on their own.

With that in mind, just as Quacks of Quedlinburg has a deservedly large fanbase, I expect Cubitos will as well. It is good for many of the same reasons, but it is unique enough that it doesn’t feel like a ripoff. It’s definitely worth checking out.

Cubitos is a zany and fun experience. Fast-paced and full of laughs, it's definitely worth checking out.