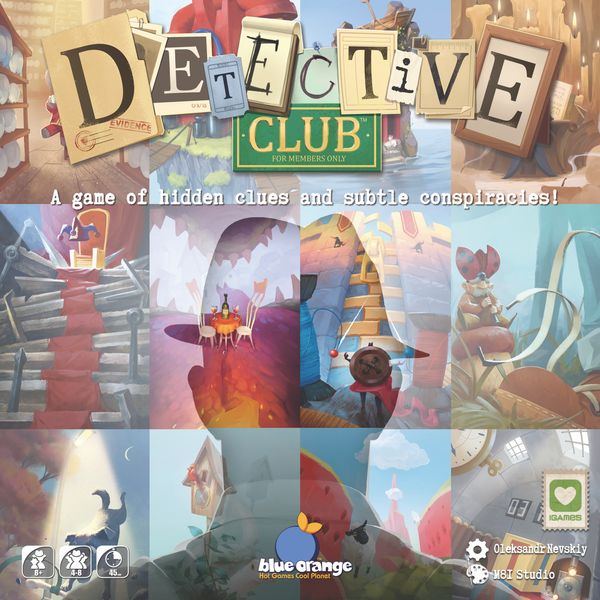 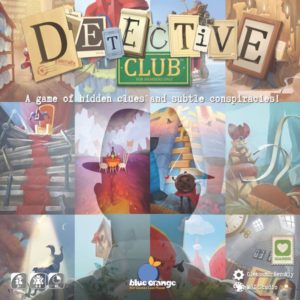 Detective Club is a new release from Blue Orange Games. In this game, all players except one know a secret word, and they take turns revealing cards with abstract pictures to try to convey the word. The player who doesn’t know the word must try to “blend in” by playing cards they think may pertain to it. Each round, players vote on who they believe does not know the word. It is an excellent game for families and gamers.

Detective Club is a family-weight, party-style game about blending in. Wrapped in the eye-popping art style of Dixit and Mysterium, this game takes concepts from those titles and puts a clever twist on them.

At the start of the game, each player receives a hand of cards that bear bizarre, abstract images. A number of small notepads – one less than the number of players – are placed in the play area.

The goal of the game is to earn the most points. To begin a turn, the active player thinks of a word that relates to two of the cards in his hand. 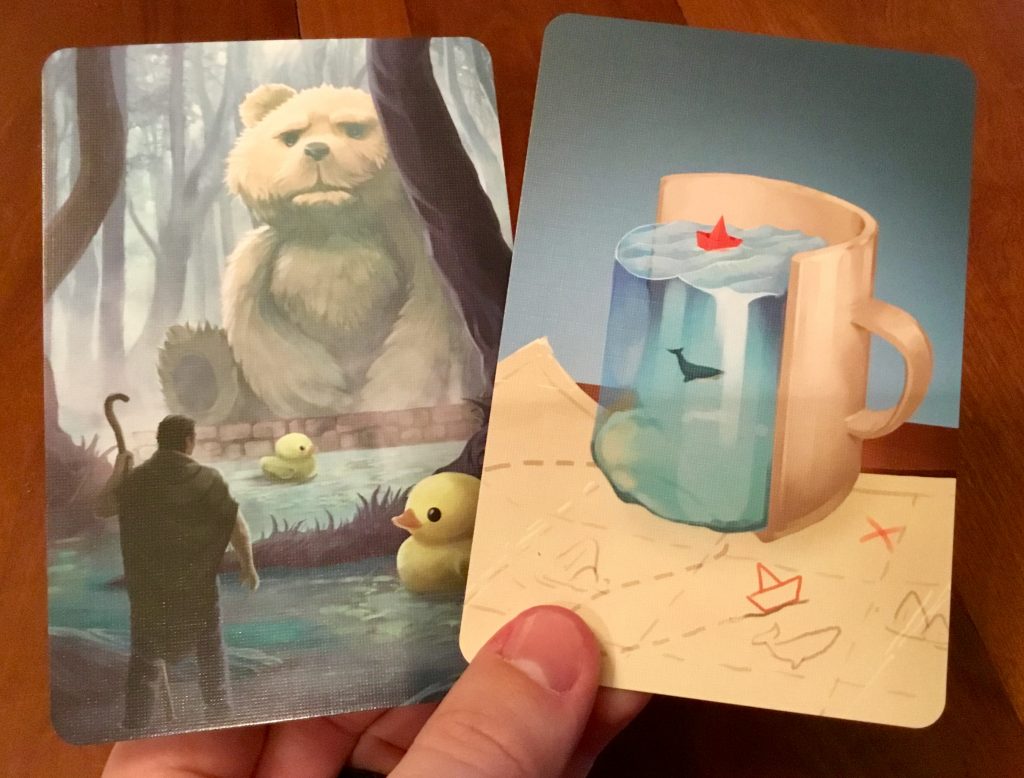 In this example, the player might choose the word “water.” He takes the notepads and secretly writes the word on all but one of them.

He then shuffles them, face-down, and deals one to each other person. Players examine their notepads, and in doing so, everyone but one player learns the secret word. The player who doesn’t know the word is called the “Conspirator.” 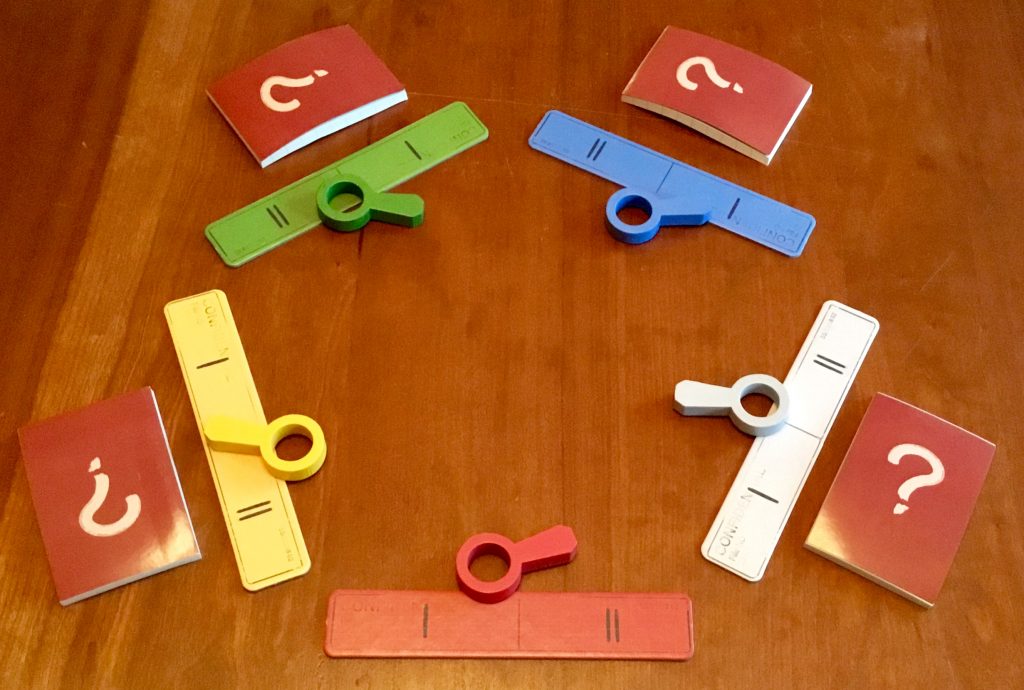 Next, the active player places one of his relevant cards face-up on the table. In turn order, each other player does the same. This process is repeated, such that everyone plays two cards (supposedly) related to the secret word. 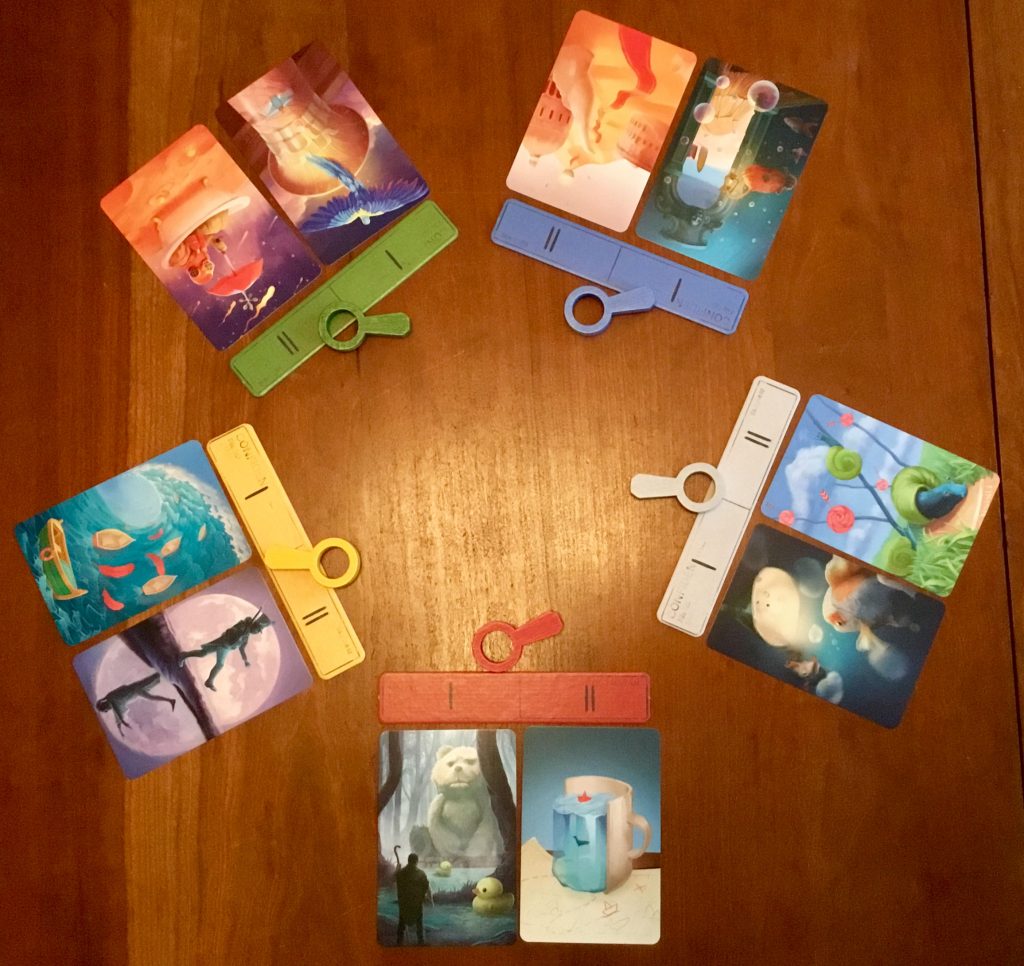 At this time, the active player reveals what the word was. Each player then gets a chance to explain why they chose the cards they did, and how they pertain to the word. This means, of course, that the Conspirator must “wing it,” as they try to bluff a reasonable explanation and pretend like they knew what the word was all along.

Lastly, each non-active player votes, in turn order, on who they believe to be the Conspirator. Points are awarded, depending upon the outcome of the vote: 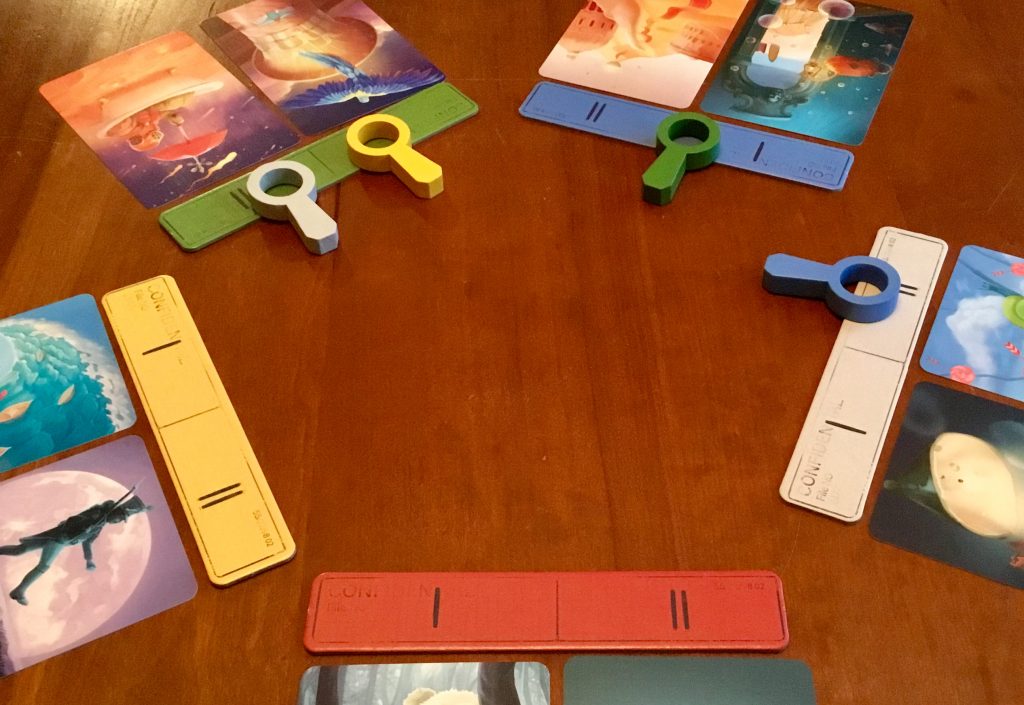 The game lasts one or two full rounds, depending upon the number of players, such that each player gets to be the active player once or twice. At the end of the game, the player with the most points wins!

Detective Club can be succinctly described as “Dixit meets Spyfall.” I’ll admit that mechanically, it doesn’t do much that is super new or innovative, but the way that it combines familiar concepts produces amazing results. To be honest, I had grown a bit tired of Dixit– and Mysterium-style games, but Detective Club breathed new life into this genre for me.

The play experience is fun in any role; it is just as enjoyable to be the Conspirator as it is to try to locate him. The players who know the word have to ask themselves “who here doesn’t know what’s going on, but is trying to fake it?” Likewise, the Conspirator must be careful not to give any tells with behavior or body language. The players who know the word likely won’t take long choosing their cards, so if the Conspirator hesitates, it might give his identity away. He often has to make a quick choice and think on his feet how to convince the others that his cards fit the word.

As a variant of sorts, players can choose to skip the discussion round, and go straight to a vote after all the cards are played. I tried both play modes, and I greatly enjoyed each one. The discussion phase adds an extra layer of challenge for the Conspirator, but removing it presents an equally interesting challenge as the cards must speak for themselves.

The only nitpick I have with Detective Club is that it does not come with a player aid that lists the scoring ratios. For the sake of quick reference, it would have been nice to have an extra card that says “The Informer scores points when…, The Conspirator scores points when…,” etc. It’s a minor detail, but I felt it was worth mentioning.

I really, really like Detective Club. It looks great, it plays great, and its simple ruleset makes it easily accessible to new players. I definitely recommend checking it out.