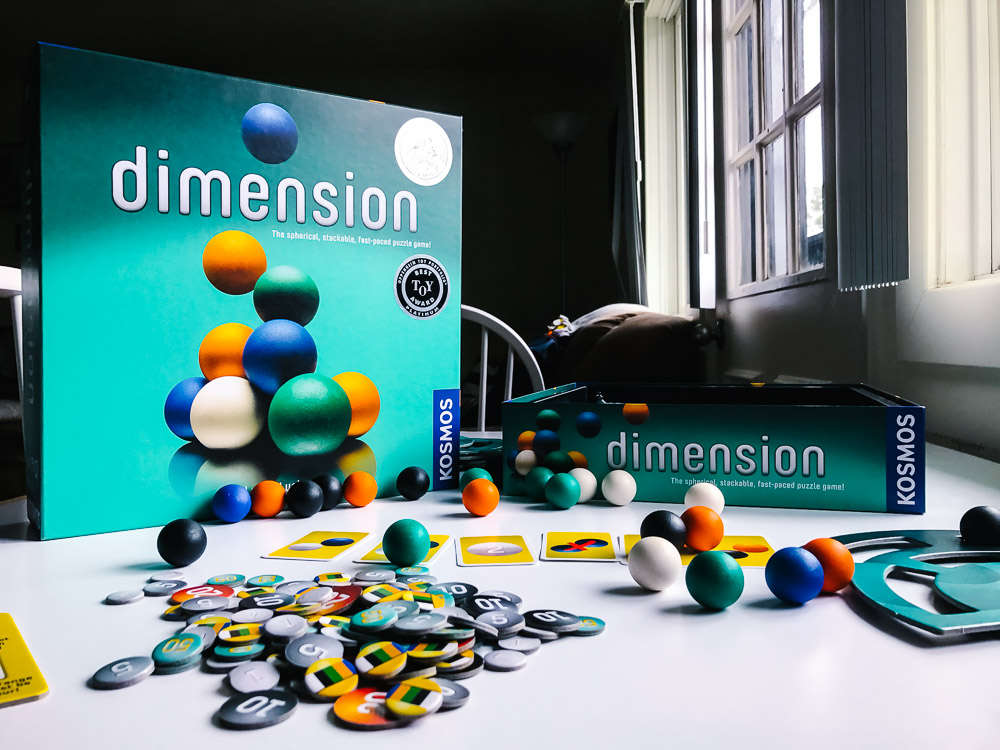 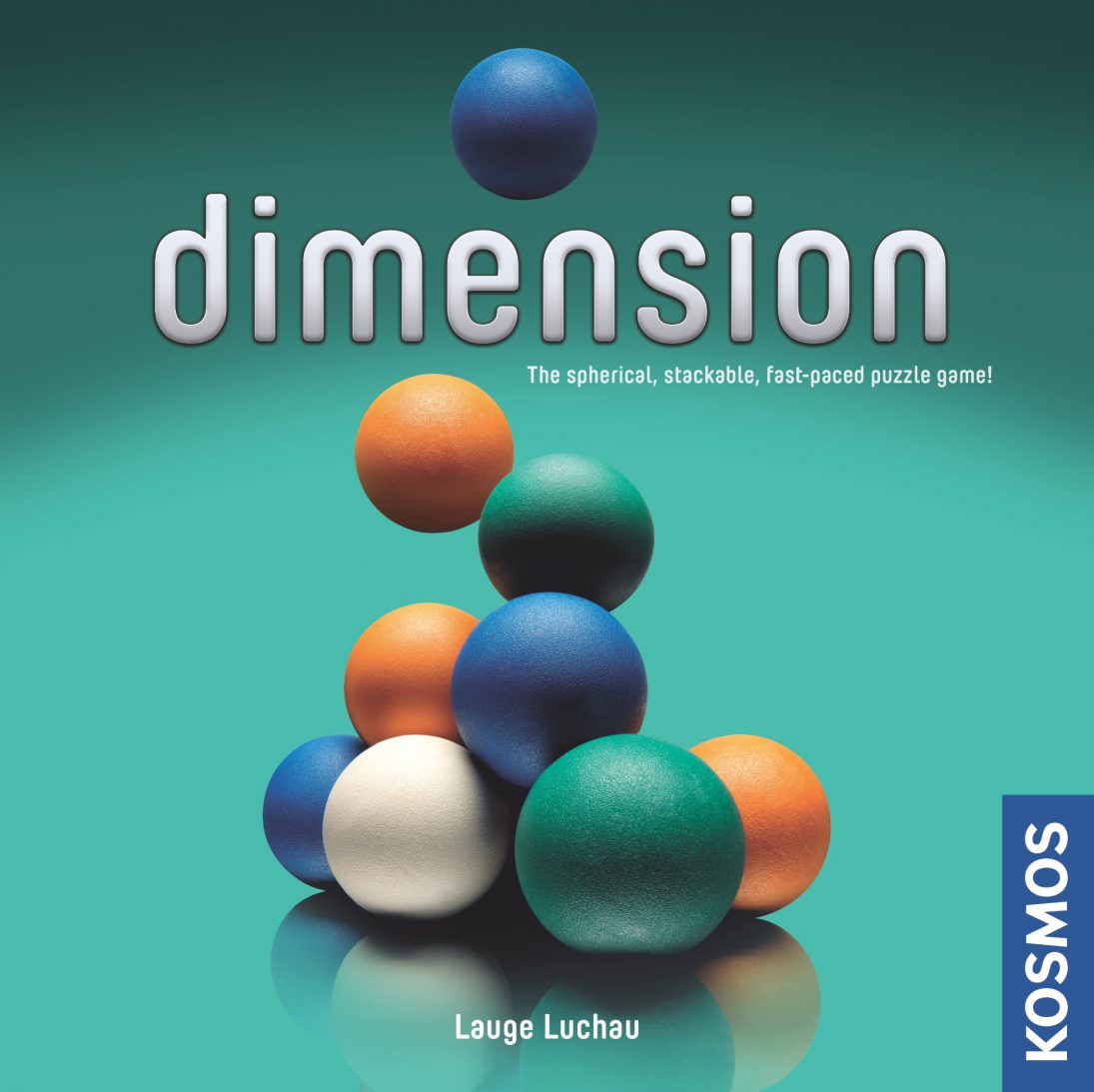 Thames and Kosmos is a science kit and board games publisher, with KOSMOS being the branch specifically for board gaming. KOSMOS has long published many games, including Reiner Knizia’s Through the Desert, Ken Follet’s The Pillars of the Earth, and the original printing of The Settlers of Catan.

More recently KOSMOS has published a number of children’s and puzzle games, including Harry Hopper, Kerala, Ubongo, and many more. In addition, KOSMOS publishes a number of hobby/strategy titles, including Imhotep, Legends of Andor, Tumult Royale, Kahuna, Lost Cities, and the upcoming A Column of Fire. 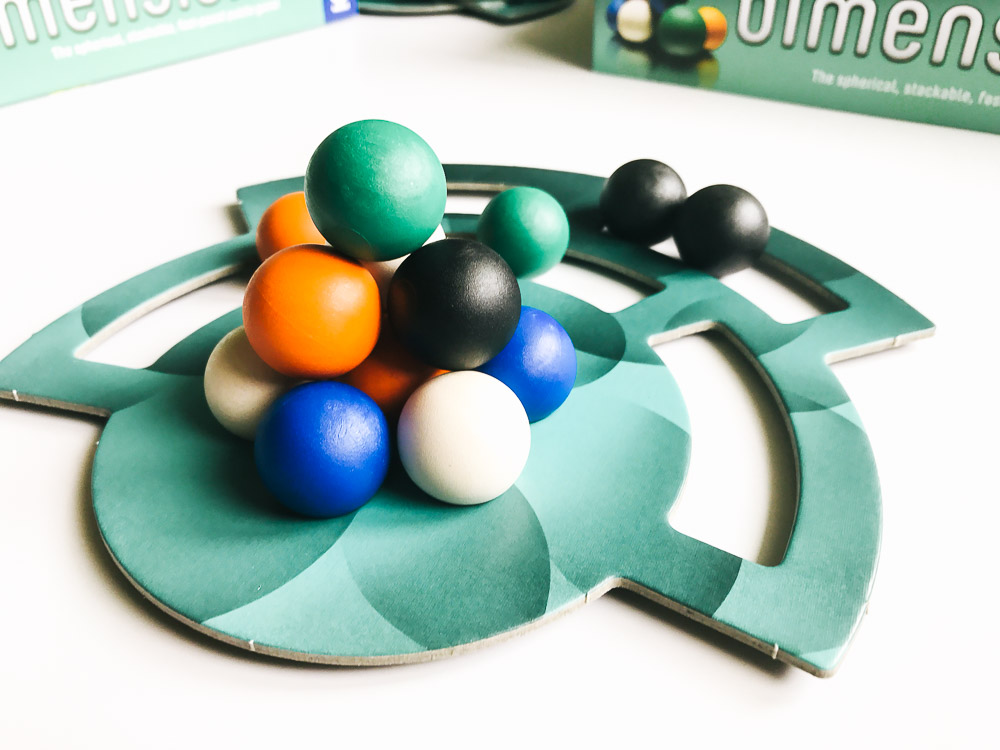 Dimension is a puzzle game about stacking spheres. There is nothing to worry about with this one. 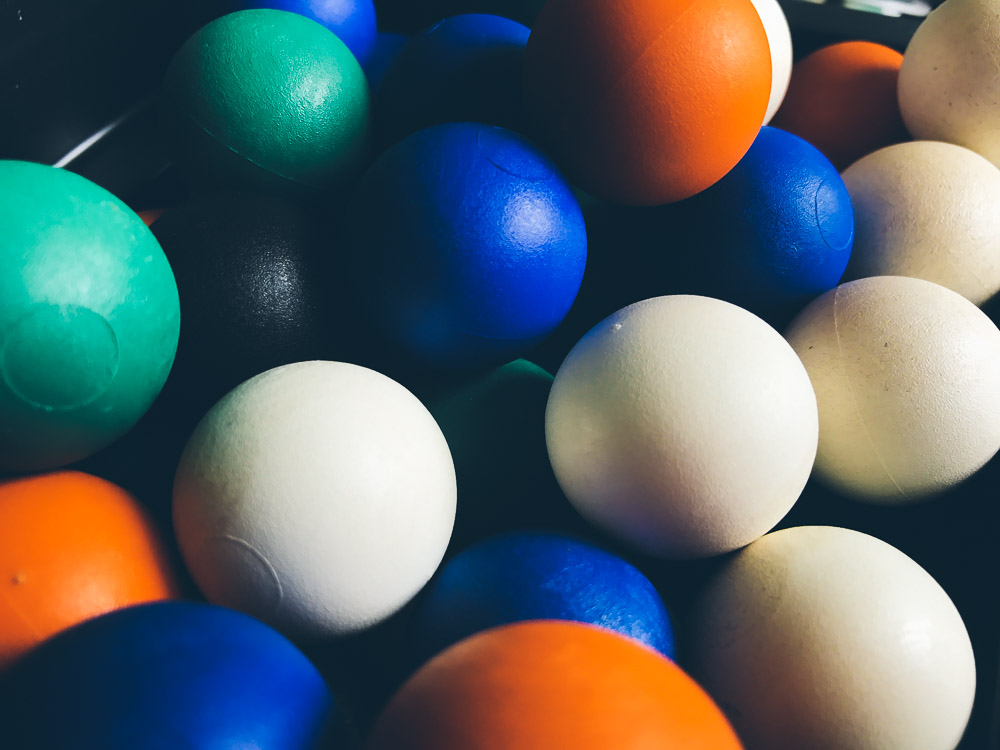 Dimension is a beautiful and intricate game of puzzle-solving. Players organize and stack spheres into three tiers, while under duress from a sand timer countdown. Like any good puzzle, rules guide the players in the order of placement. The winner will be the player who can both place more spheres than their opponents, and follow the rules most closely. 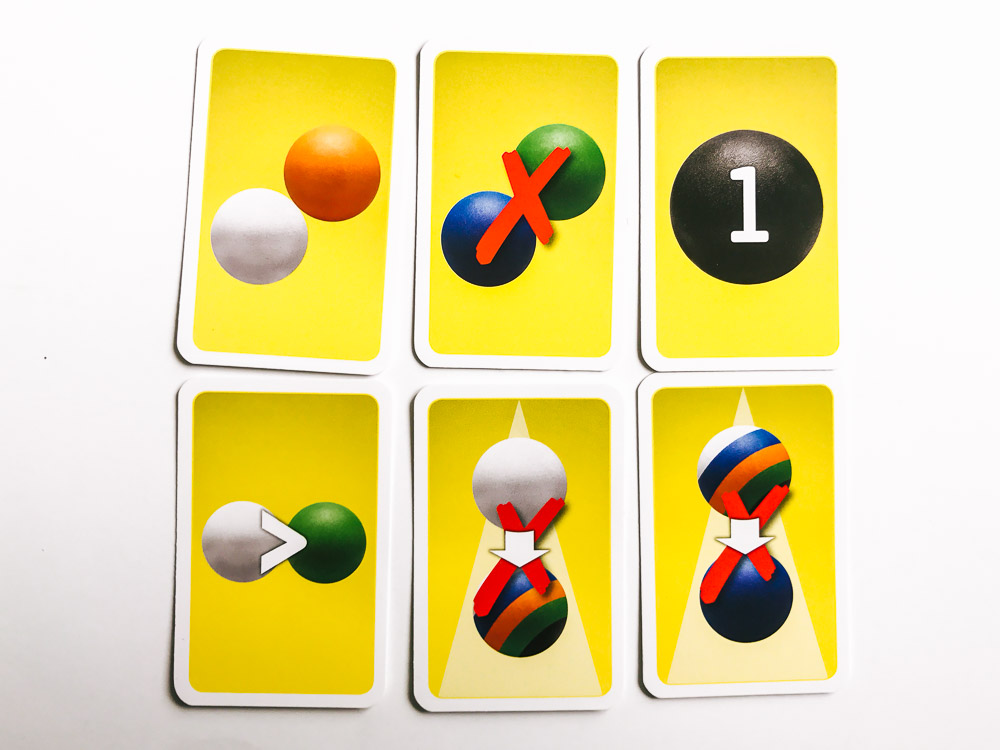 An example of one of the rulesets you might draw.

Divided into six rounds, players begin the game with 10 points, denoted by little circular chits. At the start of each round, six rule cards are flipped face up from a formidable deck of rule cards.

There are seven different rules in this deck, including:

These rules have the opportunity to contradict one another (i.e. one card says “blues cannot touch other blues,” another card reads “blues must touch other blues”) in which case players may opt for the variant where you will draw a replacement card for one of the opposers. 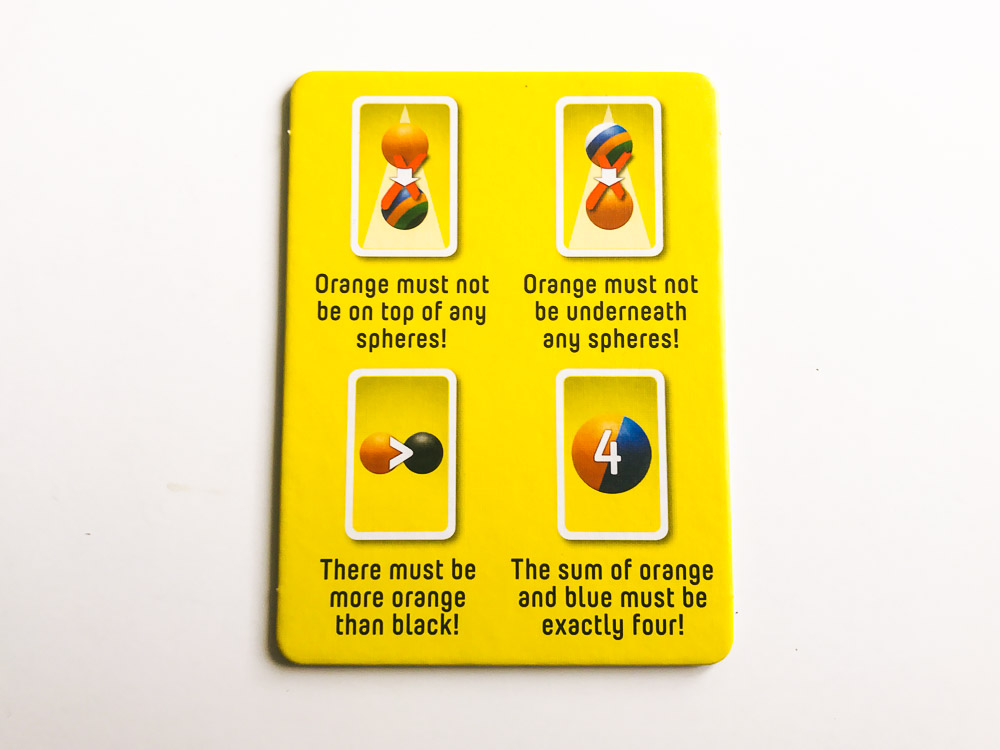 The only sort of helpful/necessary rules reference tile. The game plays so quickly, with a good teacher, you won’t need to reference it.

I’ve also tidied up these rules a bit, as I found specifically the rulings on spheres being above or below each other a tad confusing, but I decided to reword the rules in teaching new players, and we’ve had no issues since.

After the rules cards are dispersed, one player flips a 60-second-ish sand timer, and the fireworks commence.

Let me tell you, few things get me as stressed as countdown. I don’t much care for making split-second decisions in real-life scenarios, so to be forced to make in-game choices on a timer definitely gets the adrenaline pumping. In the real world, it’s wise to take time to adjust to situations and mull over your options. It’s a stressful, difficult thing. In Dimension, the thrill of the game is flexing your critical thinking quickly enough to adjust to each rule card. In other words: this is a very, very good stress.

See, each player has a cardboard grid that both holds their spheres in the supply, as well as a 7-sphere grid used for actual placement and scoring. At the end of every round, players receive one point for each sphere they placed into the grid. Oh, I should mention spheres stack onto one another, up to three tiers total, with one sphere resting above the rest, creating a strange round pyramid of sorts. Once players have taken points for each sphere, they altogether score against the rules for the round, taking away two points from their total every time they break one of the rule cards. This could end up with a player losing more points than they gained. 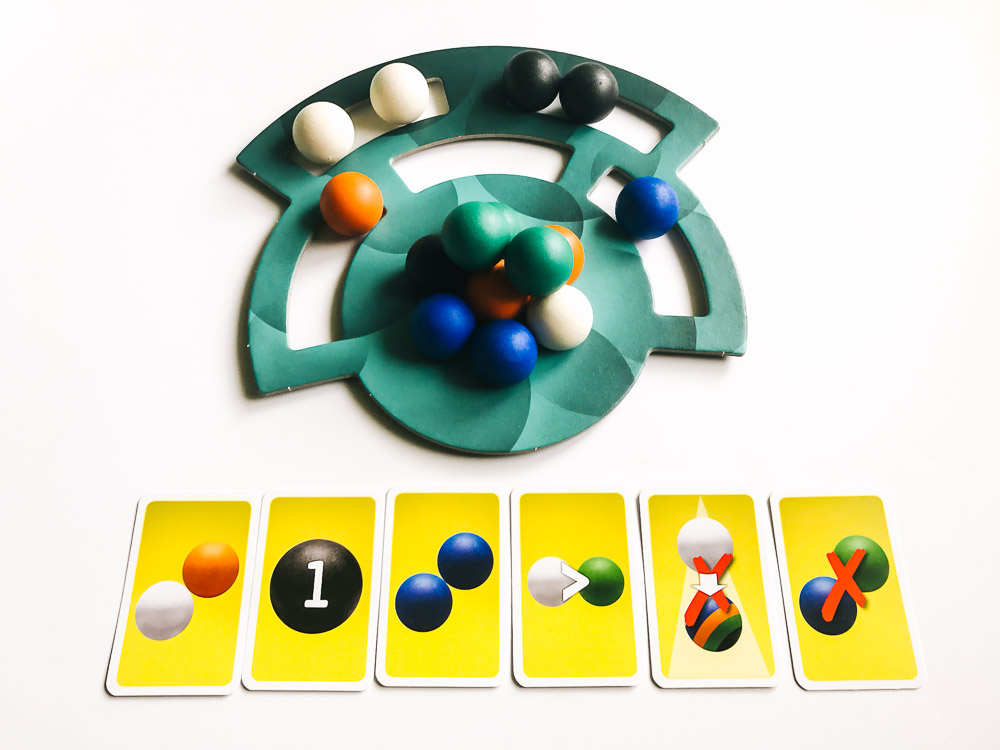 A finished Dimension setup. Oh, how colorful and abstract.

Players are not only working toward increasing their score, but also to gain bonus tokens. These funky-colored chits are granted if a player can follow each rule in a round, as well as use at least one of each of the five colors of spheres. At the end of the game, each player must lose six points, however, having bonus tokens on hand decreases the point loss, potentially granting extra points, up to six total. This acts as a mitigation of sorts and can help make up for a few failed rounds.

The spheres of Dimension are captivating. The game originally crossed my eye—if memory serves me correct—at Barnes and Noble. I was so interested in the unique box colors and stacked grid of spheres. I’m not typically an overt-puzzle gamer, but the game was intriguing to me. These spheres are possibly a light wood or a wood-like plastic. The tactility is a huge boon for the game. If the spheres were cardboard chits, I never would have picked up the game or shown interest. Dimension spheres are what make the game beautiful. Each color is vibrant and distinguished, creating unusual shapes and patterns in your finished design. It’s sort of creative, sometimes even resembling atomic structures. 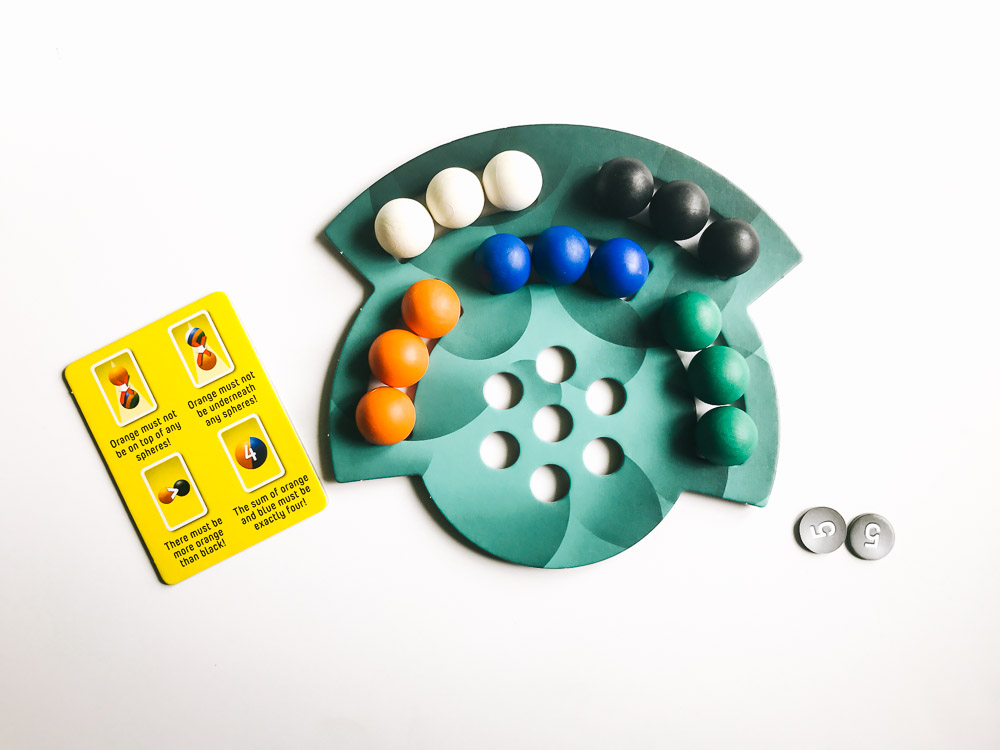 Organized and ready to go.

What draws me to Dimension is how well human error and miscalculation is presented. As you finally place the last sphere on your carefully thought out design, you take the extra time to scan the rule cards to find incompatibilities in your own stack. Of course, as the game goes, you decide you’ve completed your stack to precision, and begin to lean back in your chair, breathing a sigh of relief—only to be interrupted as you realize you foolishly place a blue next to an orange on the bottom tier of the stack! With just ten seconds remaining, you shriek, and grab all the spheres from the top of the stack, accidentally knocking some to the ground in your fury, trying to quickly reorganize your bottom row, only to hear someone exclaim, “TIME!”

This is a natural and usual round of Dimension. You might have played a dozen games of Dimension—and I speak from experience—yet your cocky and hasty miscalculation will come back to bite you every time. Luckily, Dimension doesn’t take itself too seriously, so the sheer rush of adrenaline and panic only leads to lots of laughter around the table, because it’s already happened to each individual. 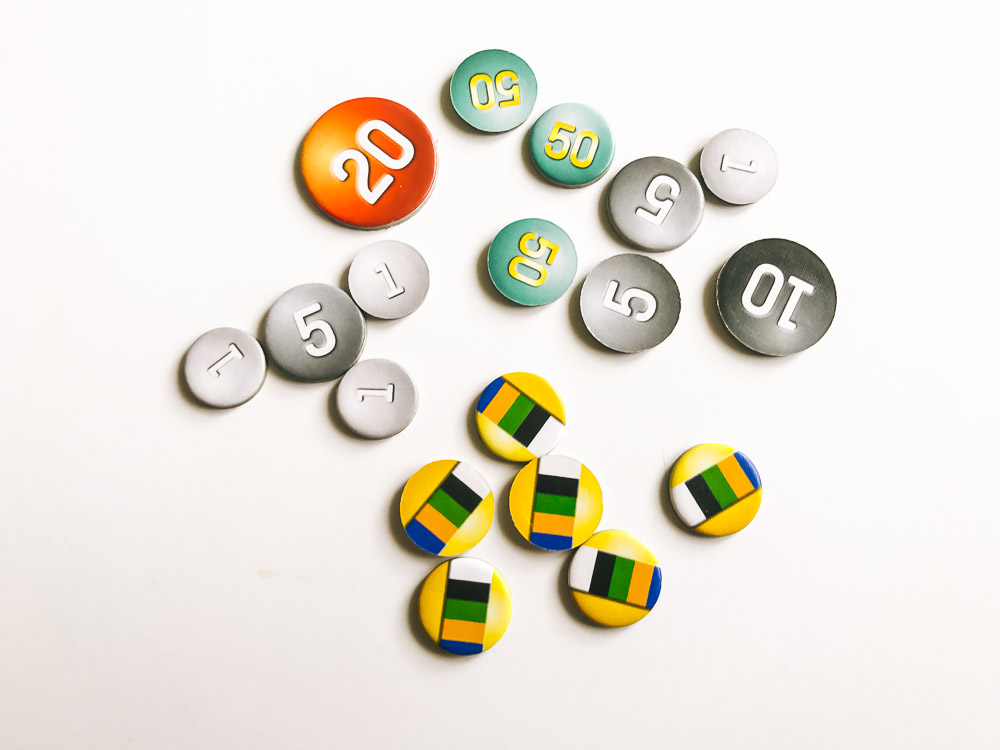 The many chits of Dimension.

Another advantage to Dimension is how easy it is to teach. The game provides a few tiles that break down each rule as a reminder, but I found them completely unnecessary. Players should pick up on the rules quickly enough, as the cards will determine the objectives for the round quite clearly. After all, with only a minute to plan and execute your design, you don’t have time to check the rule card, then consult your tile to see what it means, then place a sphere.

Dimension doesn’t feature a theme. As a hobby gamer, I play lots of different games with various themes from fantasy warfare, to suburb-building, to time travel with worker placement. Dimension is unashamedly a puzzle game, fitting squarely into the square-shaped puzzle gaming hole. Sometimes, breaking off from thematic gaming and taking 30 minutes to stretch your mind is an excellent choice, and Dimension does it exceptionally well. It’s also very approachable for those who don’t play many board games. This could easily be a weekly classic for family game nights. It’s easy to learn and has plenty of re-playability for what it is. 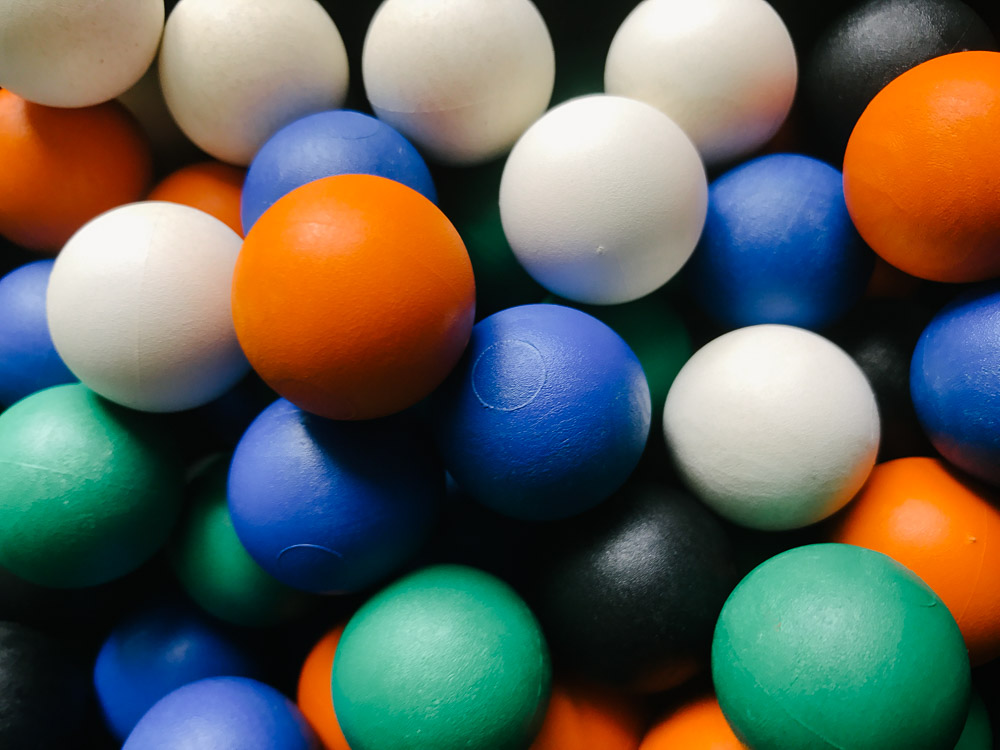 I’m not a huge fan of the art design on the various point chits. This is radial gradient galore. The bonus tokens look more like a printing style guide than a game component. The grids themselves are fine, and provide slots to store your extra, on-deck spheres. In addition, the game ships with rubber sticky feet to attach to the bottom of each grid. The bottoms also denote where to stick the feet, which is another wise design choice.

The insert is passable. It has room for reference tiles (even though they are a pain to pull out), rule cards, and two big baggies for the spheres. I’m a freak about organizing cardboard when I game. For some reason though, when I play Dimension, I just dump the chit bag in the middle of the table. I suppose the abstract nature of the game draws me away from taking the time to organize. I’ll just search for whatever increments of points I’m looking for.

Dimension is quite the game. Sure, some geniuses might have no problem deciphering how to quickly analyze and resolve each round, but for those of us light puzzle gamers, I find Dimension a wonderful addition to my collection. I think my parents will get a kick out of it. I should also mention the extremely low price point. There’s quite a bit of game here for just $20. If you’re looking for something cheap, short, and a little thinky, Dimension is for you.

Dimension is a wonderful, affordable puzzle game with beautiful spherical components. While the rest of the box contents are decent, Dimension offers plenty of re-playability and is extremely accessible for all sorts of gamers.