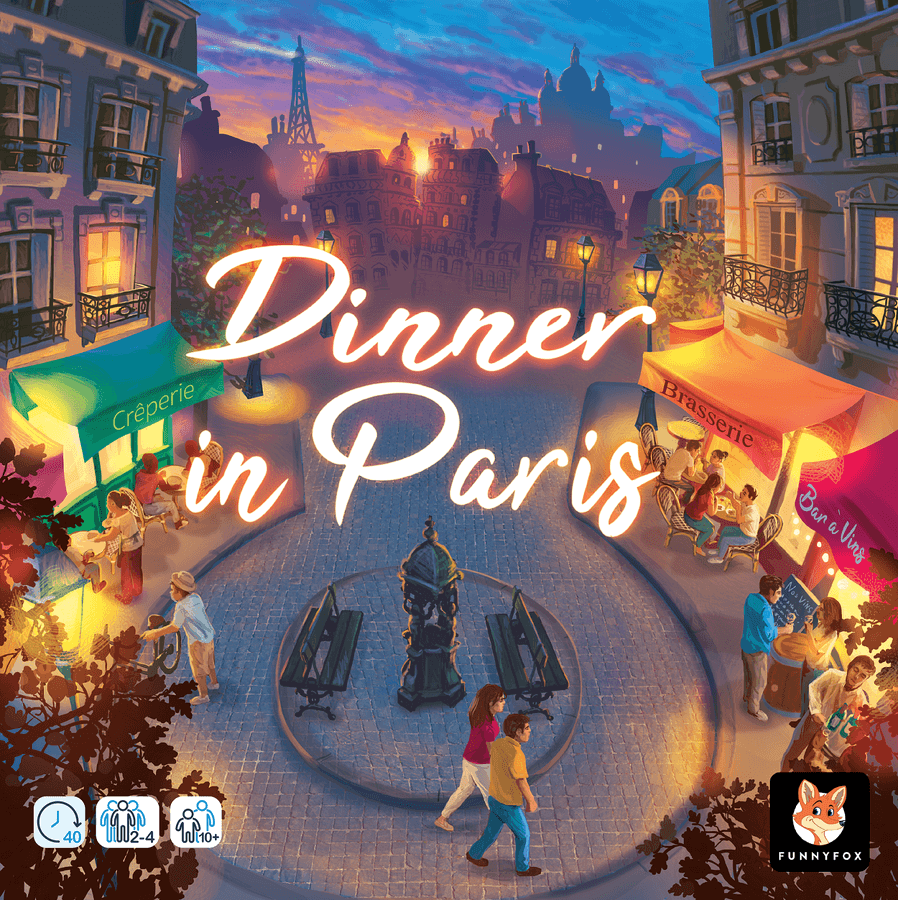 Dinner in Paris is a tile-laying game about building cafés and outdoor terraces in the City of Love. Light on rules, but with enough tactical decisions to engage experienced gamers, it is good for a wide variety of tastes. Read on for our full review!

In this game, a new pedestrian square has opened in the heart of Paris, and entrepreneurs are scrambling to establish restaurants there. The game is played on a central board representing the new development, with a grid of squares where restaurants and terraces can be built. 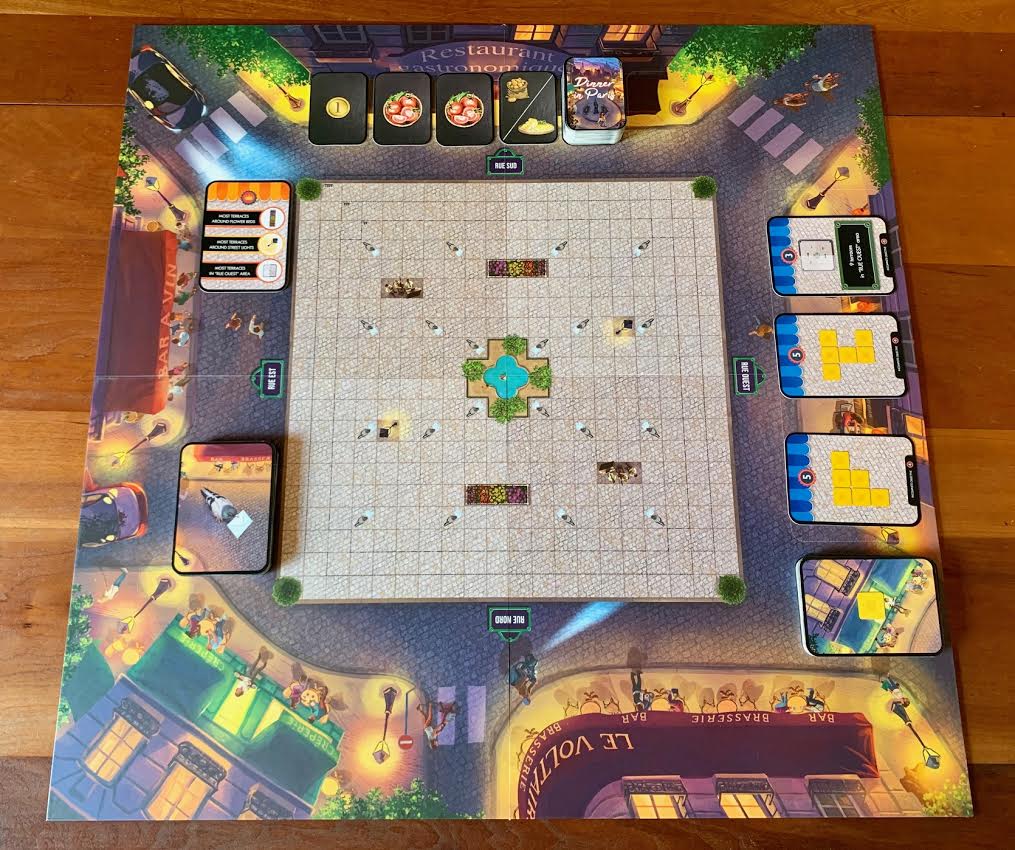 The game comes with a pile of lovely plastic restaurant buildings in several sizes; roof pieces snap onto the tops of them. Each building also receives a sticker “sign” to mark which one it is.

Throughout the game, restaurants will be placed along the outermost edge of the grid. (Depending upon the number of players, this outer boundary may vary.) Some of the spaces on the board bear features like flower beds and lampposts. These spaces cannot be built upon, but may be relevant to endgame scoring.

The goal of the game is to earn the most points. On a player’s turn, they begin by drawing a resource card. (Everyone begins with a hand of these.)

After drawing, the active player executes 2 actions. The available actions are:

In addition to the central board, each player keeps an individual tableau. The tableau boards track income, list the costs and rewards of building things, and act as a market from which players can buy their terrace tiles. Terraces are worth points at the end of the game; the more tiles a player lays, the more points they will earn. Likewise, restaurants increase players’ income potential and score victory points. 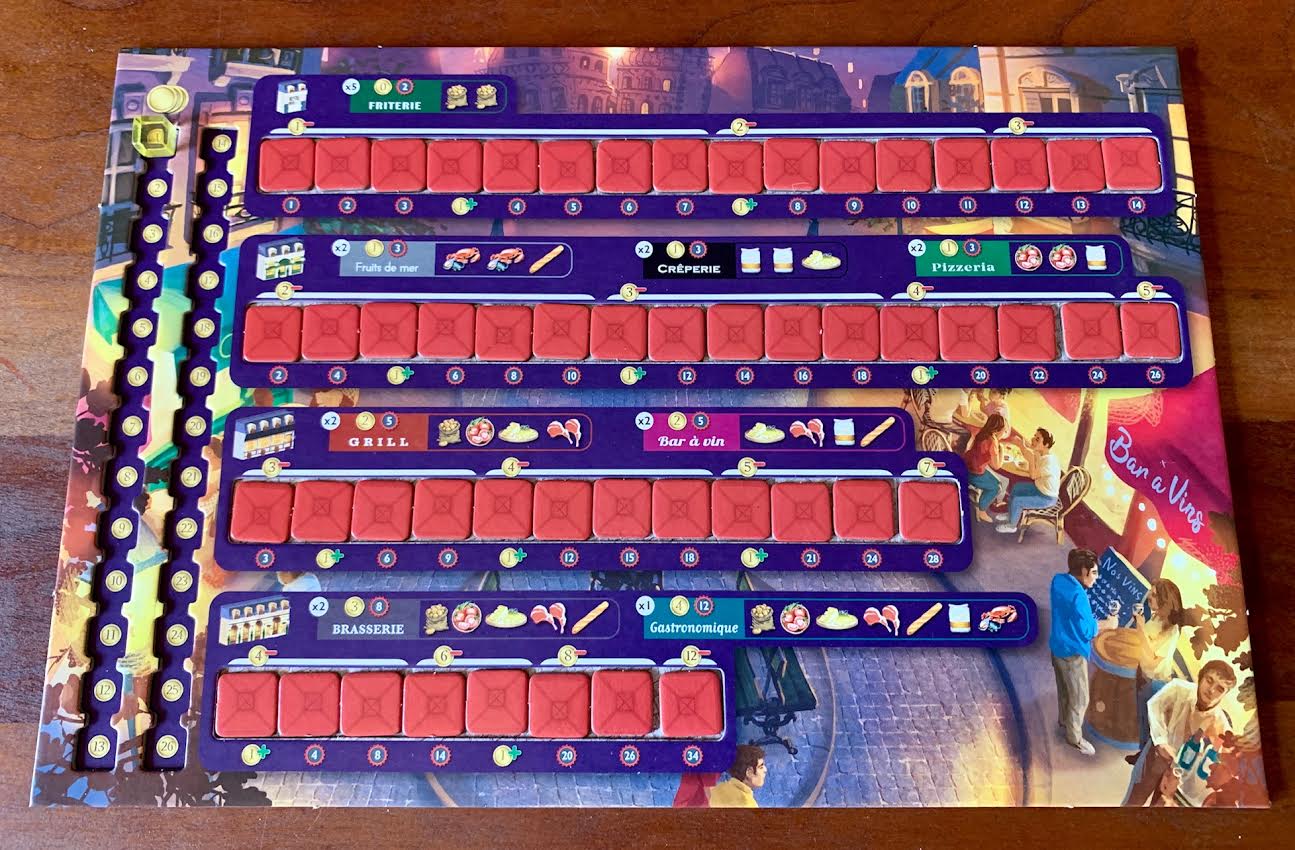 During setup, each player places their tiles on their tableau; the player boards are double-thick with depressions for the tiles, so they stay put nicely. The game includes a handful of extra terrace tiles in each color in case players lose them.

Each tile has an associated cost to build, and a player may purchase as many as they like for a single action. When adding them to the board, tiles must begin or extend a terrace in front of a restaurant. One restaurant’s terrace may never connect to another (thought they may touch diagonally). In other words, terraces can never “merge,” but must always be distinct from one another. 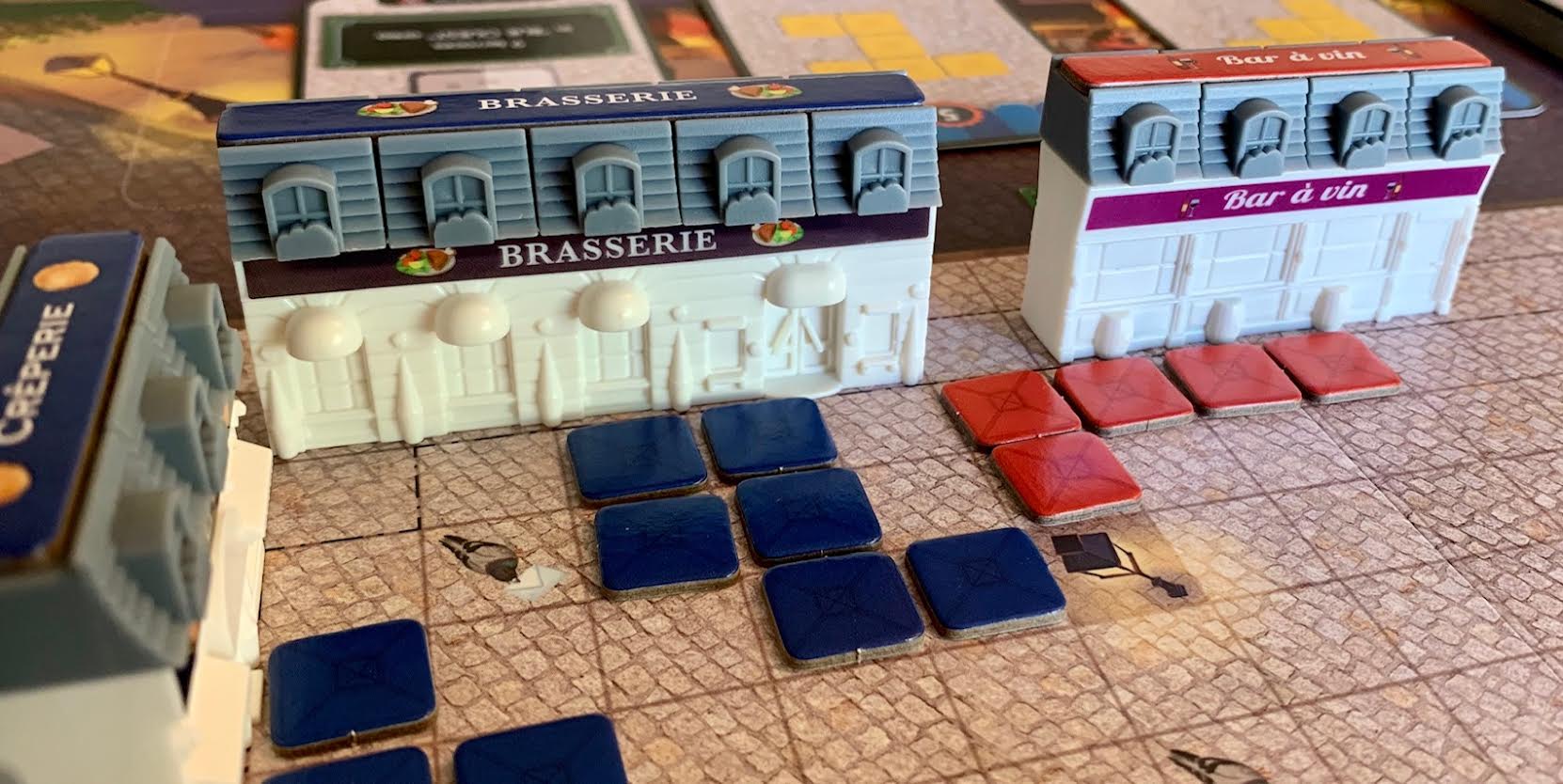 Here, red began expanding his terrace aggressively toward blue’s. To keep from getting boxed in, the blue player pushed back. Now, the two empty spaces between the terraces cannot be used, since different terraces cannot touch.

When a player places a tile on a space with a pigeon, they draw a pigeon card. These cards offer helpful bonuses, either immediately or on a future turn.

Throughout the game, players may fulfill objectives, either private or public ones. It costs an action to complete an objective, but it is usually in players’ best interest, because they are worth points at game end. (And incomplete private objectives are worth minus points!)

There are 3 possible game-end triggers, and when any one of them happens, players finish the round and then calculate their scores. Points can come from restaurants, terraces, objectives, and majorities (e.g. most money, most tiles around decor elements, etc.) The player with the most points wins!

Dinner in Paris has a classic feel to it, with straightforward gameplay and a clean design. It is pretty accessible, so first-time players should be able to jump right in. It also plays in under an hour, so folks at a game night could conceivably play back-to-back rounds.

Despite its warm look and cheerful theme, Dinner in Paris can be surprisingly cutthroat (which I really like). As space on the board becomes increasingly limited, players must try to elbow their way into the best spots and expand their terraces to box out opponents. The game is not mean-spirited, but it definitely provides room for clever tactics.

The production quality of Dinner in Paris is top-notch. The detailed plastic restaurants are the stars of the show, but the board, tableaus, and box art are all quite attractive as well. The rulebook is clear and concise, and it is laid out thoughtfully. All in all, this game looks and feels like a well-made product.

Despite not knowing what to expect from Dinner in Paris, I enjoyed it quite a lot. It is a lovely family game that I expect will appeal to a lot of people. If you enjoy games on the light-ish side – simple on rules but big on fun – check this one out!

A review copy was provided by Hachette Boardgames.

Dinner in Paris is a lovely family game that I expect will appeal to a lot of people. If you enjoy games on the light-ish side – simple on rules but big on fun – check this one out!