Review – Dragon Heist and Dungeon of the Mad Mage

A 2-for-1 D&D supplement book review 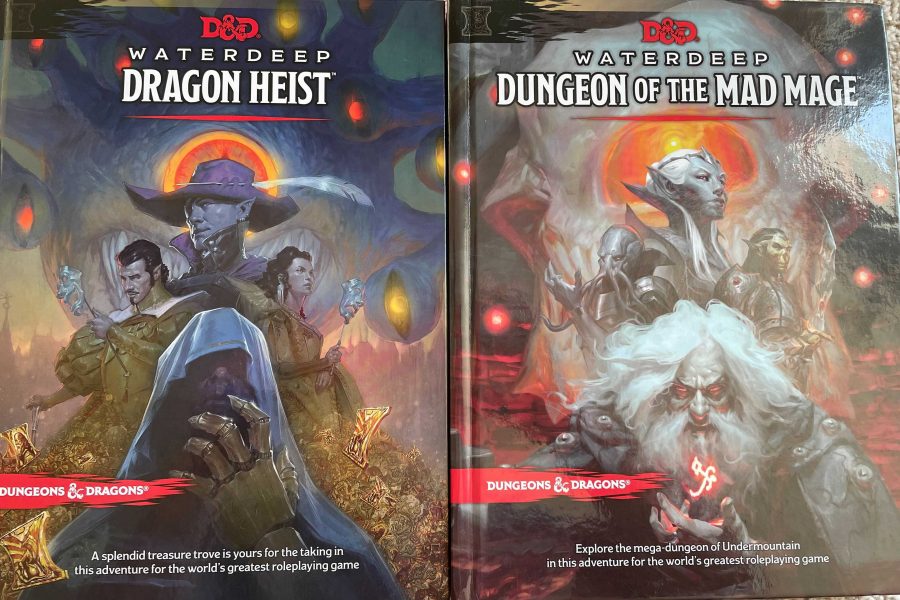 Dragon Heist and Dungeon of the Mad Mage are two D&D books that are linked together, but may be played separately from each other. Dragon Heist serves as an urban treasure hunt set against the city of Waterdeep, while Dungeon of the Mad Mage takes parties of higher levels down into the Undermountain, where a crazed spellcaster has made a sprawling multi-level dungeon. Plot hooks at the end of Dragon Heist link them together. So, is it worth the trip to this fantasy city and dungeon? Read on for the review!

Players will encounter in both books several different manners of characters, monsters, creatures, magic, and items with friendly, antagonistic, kind, and evil intentions as well as several other flavors in-between. If any specific scenarios or enemies give you pause, best to speak with your Game/Dungeon Master and work out a plan. Nothing in the in-book images that hasn’t been in a D&D book before, but it does feature several different characters and monsters in action, some of them in peril.

Dragon Heist starts out simple enough: players are tasked with finding Volothamp Geddarm’s (of Volo’s Guide to Monsters fame) friend, Floon Blagmarr, who recently went missing. In the process players will run into an estranged heir, win an estate, investigate a murder, and with some luck and success, discover the missing half-million gold coins that were hidden inside the city walls. This campaign is also highly replayable due to the fact that the DM will decide who the main antagonist is early on, which will also determine the season that the players experience in Waterdeep. So while some of the story beats are similar, someone could easily play the Dragon Heist campaign four different times and only the opening chapter and one or two other touchstones would be the same.

This amount of campaign customization is amazing, and I wish more supplement books would follow suit. In order to keep DM’s on track, they even included flowcharts giving you background and reminders of what you’ve done and what’s to come based on how far into the story you are. There’s even separate chapters (5-8) for each of the villains and their lairs, giving deeper depth and complexity to potential storytelling. And if fighting and looting isn’t someone’s cup of grog, Chapter 2 lets them settle into their new estate, complete with business rivals, guilds, taxes, and upkeep. Players can even try to reopen a tavern and try to make it profitable.  No matter what your players’ prime motivator, whether it be action, role playing, or exploration, there’s something for them in the Dragon Heist book.

Should players successfully complete the story, there’s no end to the possible plot hooks awaiting them, from interactions with the guilds or high society of Waterdeep, to the hidden dungeon under the city itself…

Dungeon of the Mad Mage is an adventure book designed for characters from 5th-20th level, with each level of the dungeon getting harder and requiring higher levels to survive it’s dangers. Undermountain was started over a thousand years ago by the wizard Halaster Blackcloak, who was eventually driven mad by the knot of magic left behind by elves. The madness caused by the Undermountain drives beings to become obsessed with it, as Halaster and his apprentices did.

The adventure hooks provided kick off from the Yawning Portal, a location players may recall from Dragon Heist. In the center of the tavern lies an old well, built into the floor. For 1 Gold, the proprietor Durnan will lower adventurers by rope down the 140-foot shaft to the first level of the Undermountain. Once there, players have several different starting quests to choose from, some of which have follow-up quests detailed in the book, or might have other prerequisites such as being a certain level. The book also details options for DMs in how they can nudge or protect Player Characters from levels that are beyond their abilities, or even death, in the form of an estranged apprentice and alternate planes.

Each chapter after the introduction details the layout, inhabitants, and specific rooms and traps that each level consists of. There may be on occasion portals or gates that allow players to traverse to different levels alternatively, but usually the best way down to the next level is to complete the current dungeon’s level. Also, some of the gates or exits may take players to completely different locales such as Icewind Dale or Skullport. At the end of each chapter is also an “Aftermath” section, which explains what should or may happen depending on the PC’s actions, successes, or failures.

While repeated dungeon delving might sound boring, the variety of the levels and inhabitants would make for exciting sessions each time; beyond traditional dungeon levels the Undermountain houses crystal labyrinths, forests, crashed ships, alternate planes, an obstacle course, castles, mazes, swamps, and numerous powerful apprentices and beings all looking to ruin players’ trip through the dungeon. Players can even end up facing Halaster himself, but would be wise to level up to 20 first.

I love the plot hooks and replayability of both Dragon Heist, and Dungeon of the Mad Mage. And it’s great to find a D&D book in Mad Mage that isn’t just another level 1-5 book, ans that works as a follow-up or standalone. I wish more D&D books built off each other like this, instead of just being referenced or, “Players will want to pick up This Book if they want to learn more.” Either one of these books would make a fine addition to any player’s shelf.

Highly replayable, not just another 1-5 level characters book, and linked together - more D&D books like these, please.