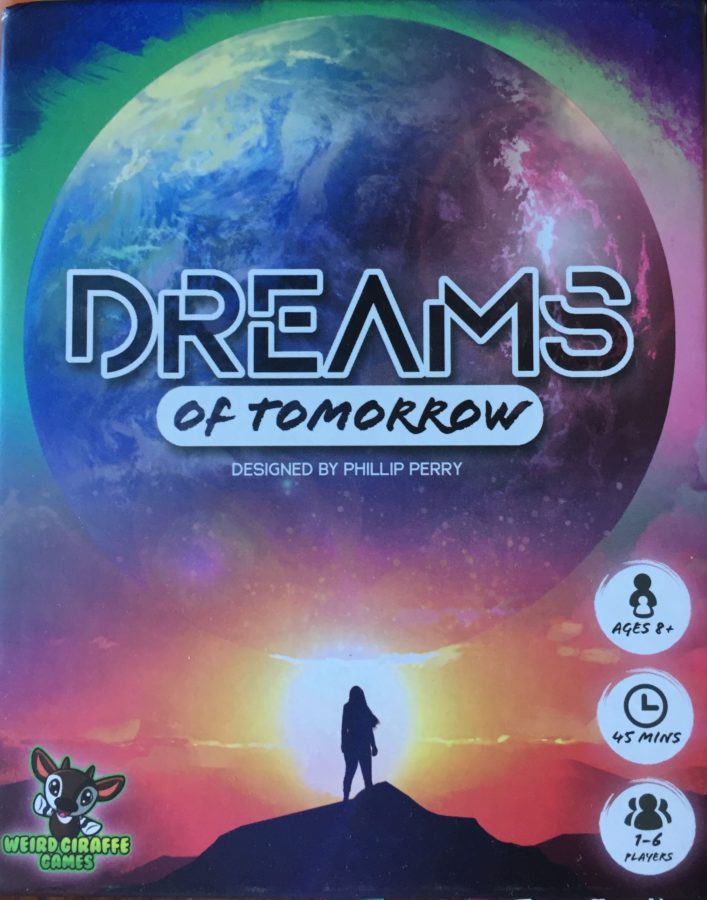 In Dreams of Tomorrow, players are Dream Engineers in a far-flung future that finds humanity teetering on the brink of destruction. Only by working their way around the central Collective Consciousness cards will players gain enough experience, hope, and creativity to be able to weave dreams and send them to the past, in hopes of fixing the future. Thematically the game lies somewhere between Quantum Leap and Travelers. Do you have what it takes to dream of a better future? 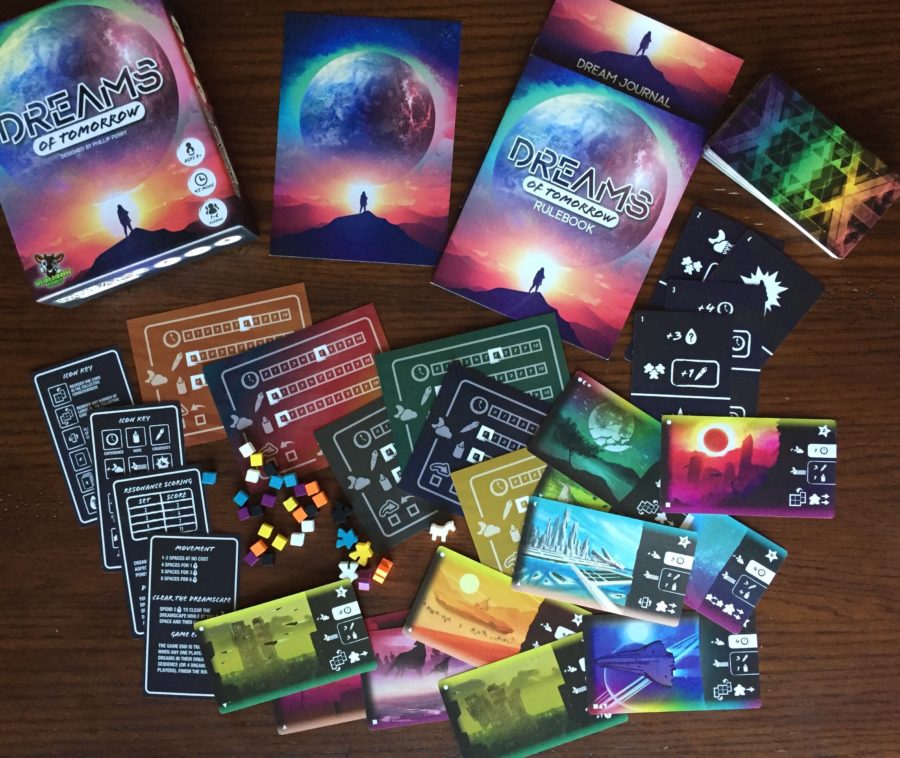 Usually I don’t go in for straight set-collection games, but I really enjoyed Dreams of Tomorrow since it gives players so much agency – they are not just collecting cards but moving around a board that’s constantly in flux as they manipulate the Collective Consciousness cards and even their own direction of travel.

The Consciousness is made up of four different cards, each divided by a center line. Players begin by moving clockwise, but as they trigger abilities and activate cards they’re able to move cards around and even flip them in hopes of placing a desirable spot within reach for the next turn – as long as someone else doesn’t move it out of reach. (But if that happens, players can also use resources to travel a little further around the board.)

I loved that how far I went each turn was entirely my choice. Also great is that most spaces players move to bear a large reward for the player moving there and a small reward for everyone else. This drives player engagement and makes it easier to get things done. 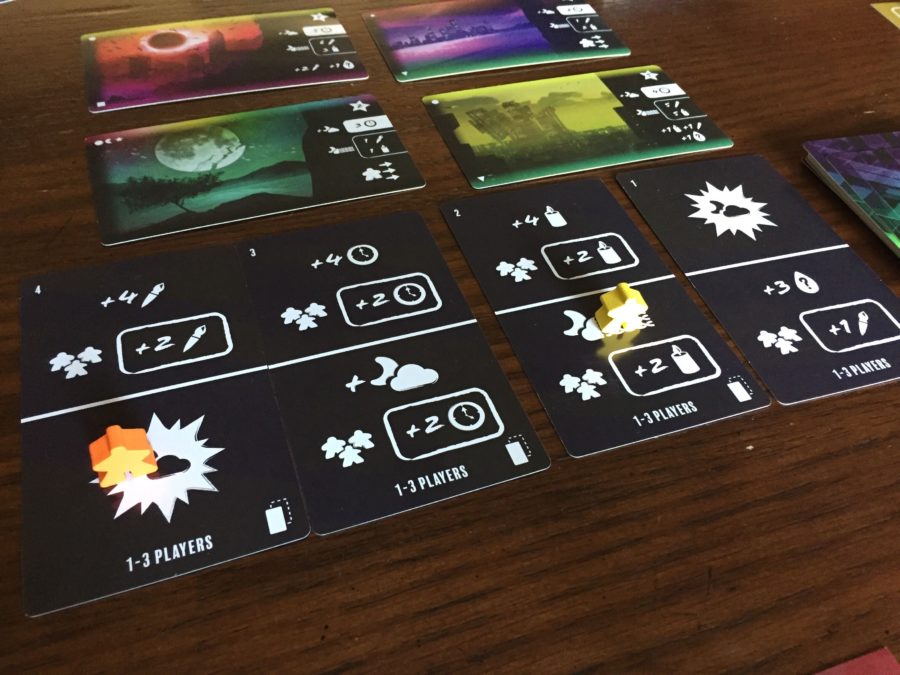 The available dreams and Collective Consciousness for a two-player game. 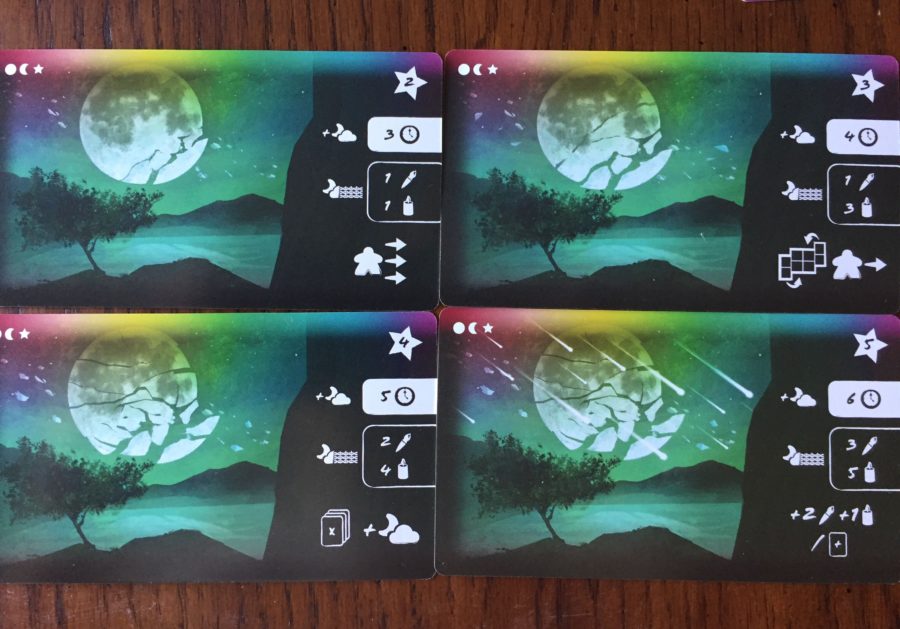 Collectively, the dreams in a set tell a visual story.

Being able to move around as I saw fit, and not at the whim of a die, completely elevated Dreams of Tomorrow for me. That, plus the high amount of choice and strategy available make it a set collection game that I’m actually happy to play, which is rare. If the dystopian futuristic Dream Engineer theme isn’t your jam, you could still enjoy collecting sets of dreams and moving around the Consciousness board. But if you are into it, there’s plenty of theme to glean from the rulebook including a short story at the end. Dreams of Tomorrow also comes with a solo mode and a “Troubled Night” mode, where players are stalked by a so-called “Night Mare” throughout the Collective Consciousness. 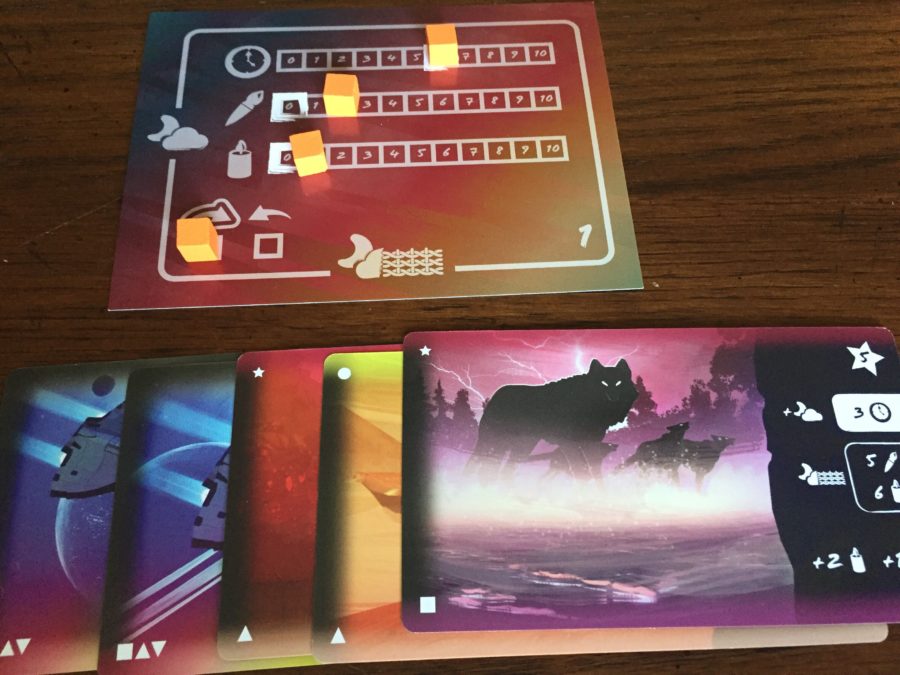 The game is over when someone weaves their 5th dream; everyone gets the same number of turns after that.

I would recommend Dreams of Tomorrow to anyone looking for a small box game with a lot of strategy and choice. It manages to dance the line well, giving players lots of agency without making it so open that they don’t know what to do next. It also has beautiful art and compelling visual storytelling. If you have the means, I would suggest picking up Dreams of Tomorrow.