If you had asked me around 2010 what kind of new mechanisms would invade modern board gaming, I would not have guessed “bingo”. Yet, after the nominations of Qwixx and (Rise of) Augustus for the 2013 Spiel des Jahres, the mechanism has been used in several board games (Karuba, Tiny Towns) as well as the entire roll / flip ‘n write genre. Most of these games are simple family games, but Ecos: First Continent goes the other way, and tries to make Bingo a true gamer’s game. Does it work? Let’s find out! 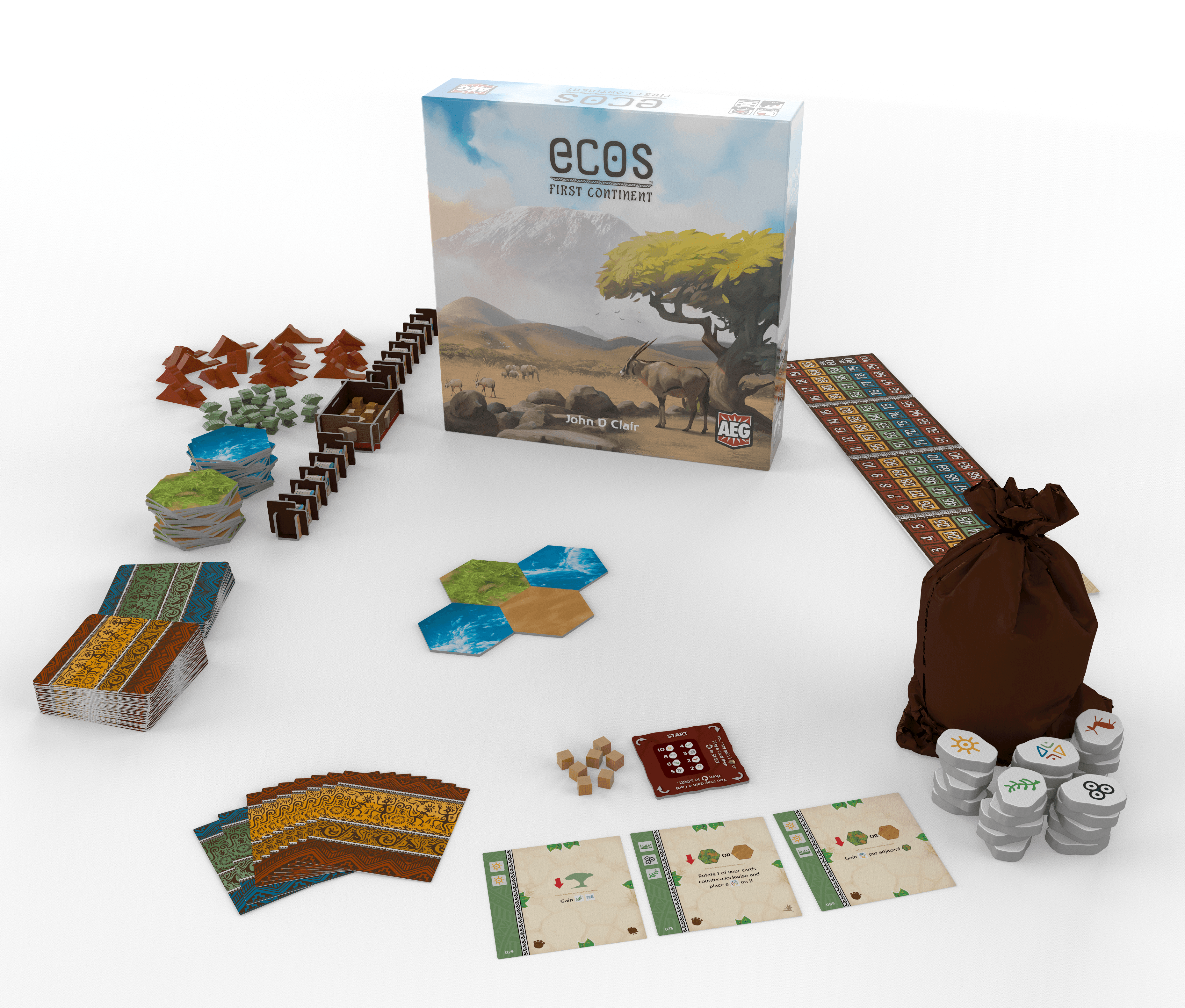 I have played most of the “bingo” games released in recent years, and quite enjoy the genre. Here, though, we need to talk about Augustus, because the main mechanism in Ecos is a direct clone of that game. In both games, tiles with icons are drawn from a bag, and players cover that icon with cubes/pawns on cards they have displayed in front of them, with the hope of completing a card by covering all of its symbols. Augustus was quite innovative, but it was too simple for adult gamers, and slightly too complex (with too boring of a theme) for kids. Rather than make an attractive, simpler package like the upcoming repackaging of Augustus (Via Magica), Ecos cranks up the complexity and tries to turn Augustus into a gamer’s game.

There are some really good ideas in Ecos that I wish had been present in Augustus. For example, if a player “whiffs” on a token draw, they can work towards playing/drawing extra cards, or getting extra cubes, so you never just completely miss a turn. I also really like the idea of cards being able to activate a few times before “fading away”, and it also nicely represents the evolutionary theme.

However, beyond that, Ecos just adds a ton of stuff on top of a central mechanism that’s too basic to support it. Almost every card has a four or five lines of effects and text, and there are at least nine cards out in play at the start of a game; that number only grows as players get going. Card effects change the central landscape and then provide ways to score points for what’s there, but with so many effects bouncing around, it is extremely hard to keep track. This is particularly frustrating if you’re a player that wants to be fully aware of what’s going on, rather than someone who eventually gives up and starts ignoring opponents’ tableaus. (I would never play this with five or six people.)

It also stilts the rhythm of the game: the excitement of the bingo draw  gets interrupted by 5 minutes of rearranging the board, counting up scoring, and players changing their minds about what to do. (There is a special rule that players later in turn order can reconsider their move if someone else’s card completion screws them up.) There are also a lot of rules about placement that take a game or two to figure out, but again, that’s more time looking at the rulebook or sorting out card effects than playing. I enjoy complex games, but if I’m committing that kind of time and mental energy, I want a lot more agency over what I’m doing.

All of this extra game on top also bumps the price up; $59.99 MSRP is completely fair for the shocking amount of cardboard inside this box, but it’s yet another way to telegraph that Ecos is trying its darnedest to be a gamer’s game, but doesn’t get there.

I would love to see a second crack at what Ecos is trying to do. Some of the basic improvements on Augustus almost feel essential. A streamlined, simple, fast card game with those improvements would be fantastic. In the meantime, however, Ecos suffers by putting too much game on top of an insufficient foundation.

Thank you to AEG for providing a review copy of Ecos: First Continent.

Ecos: First Continent takes the "bingo" mechanism too far the other away, adding too much game to a mechanism that can't support it.