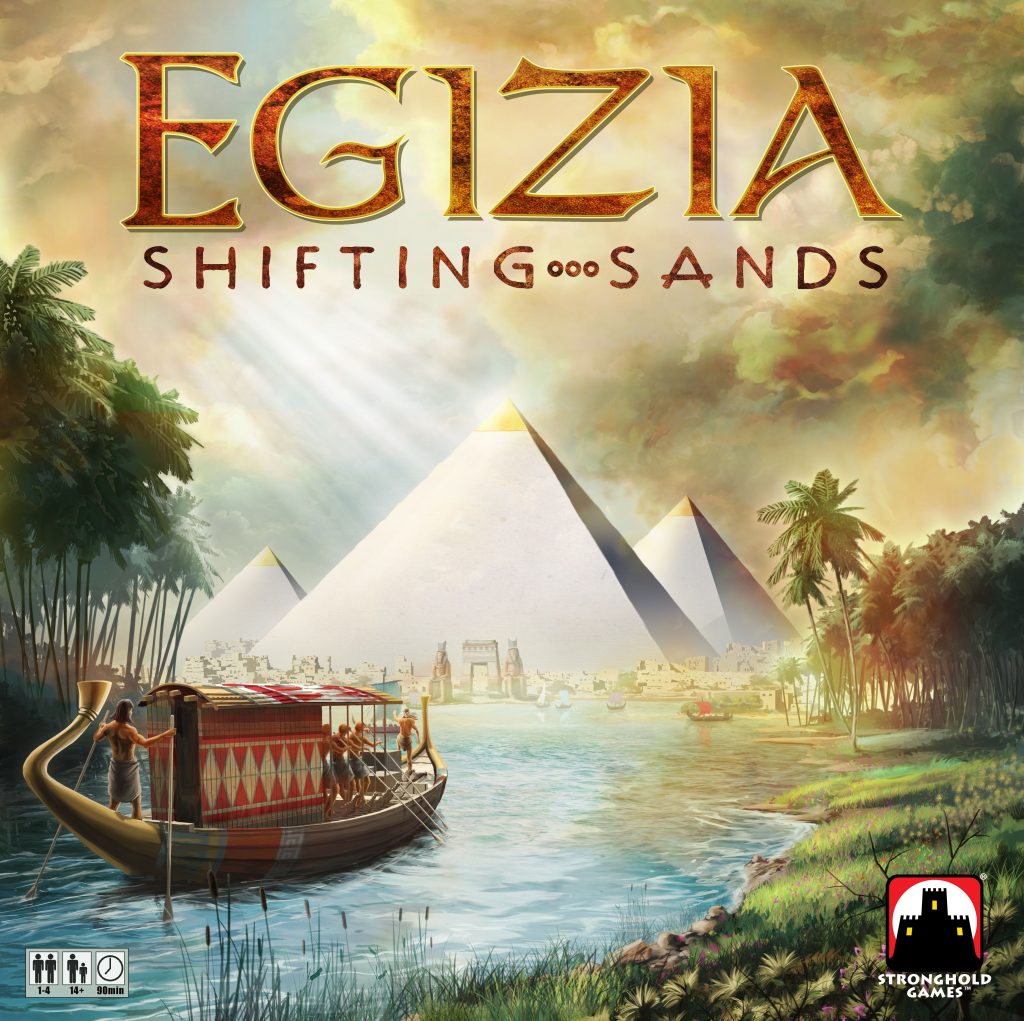 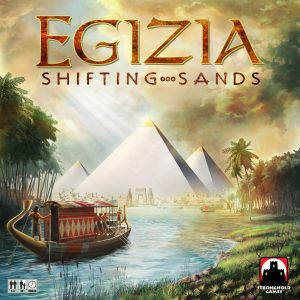 Board game personality Tom Vasel has popularized an adage: “If a board game is good enough, it will be reprinted.” It’s hard to gauge the truth of the statement or even to define “good enough,” but seeing a classic game make a comeback is always a good feeling.

Egizia was first published in 2009, and while it was well-received critically, it didn’t become popular enough to stay in print. Stronghold Games successfully Kickstarted a reworking of the title in 2019, and now it is widely available in 2020. But is a fresh coat of paint enough to boost a decade-old game? Let’s look! 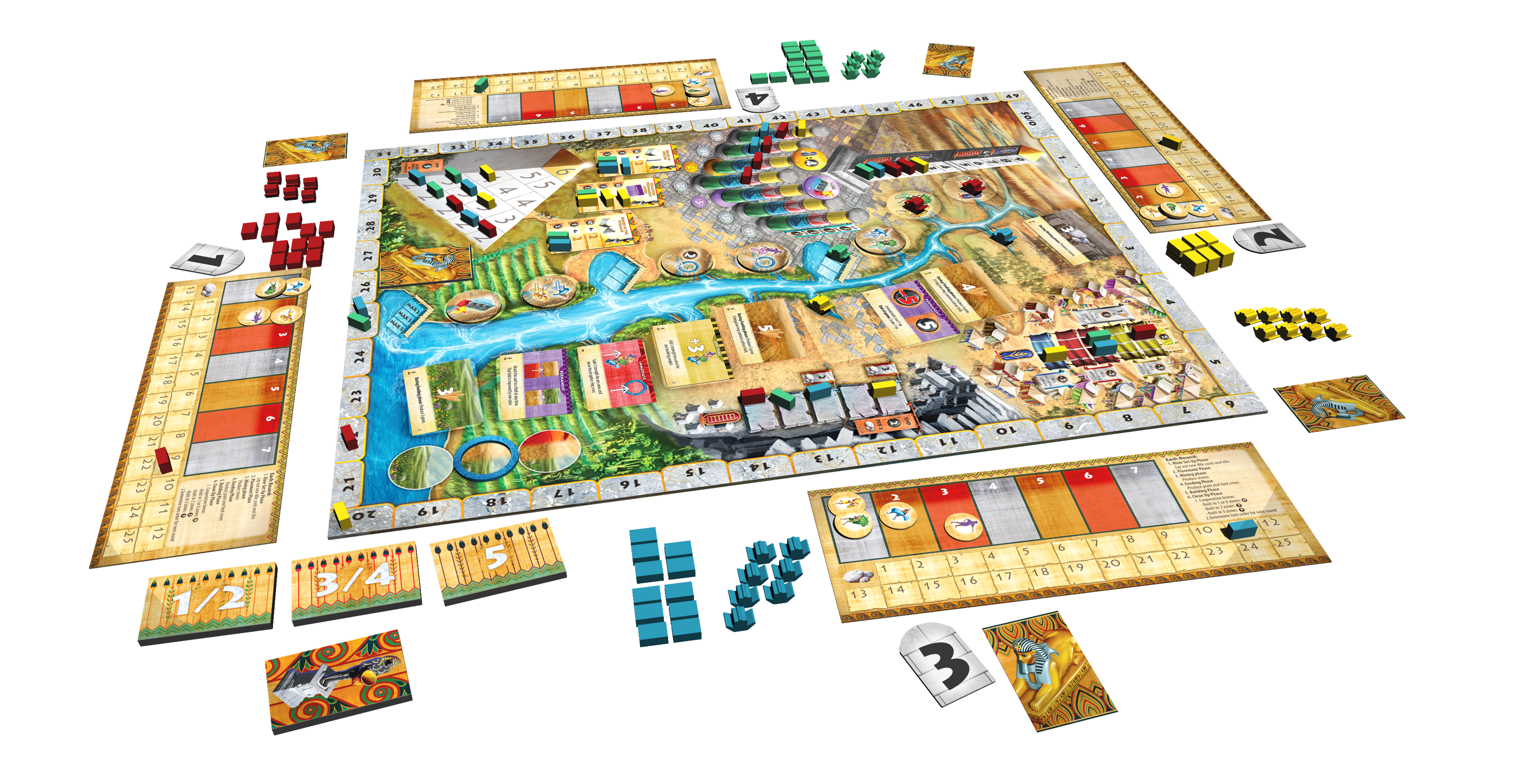 Egizia is a worker placement game, which was still a fairly new genre in 2009 but is old hat in 2020. Although I never played the original, I could definitely feel that this game was from that late 2000s “era”. And that’s not a bad thing; some of the most important genre-defining games in recent memory were released around 2007 to 2009 (Race for the Galaxy, Dominion, 7 Wonders) but Egizia was likely lost in the sea of worker placement games (Stone Age, Agricola, and many others). However, Egizia brought its own spin on the mechanism.

In Egizia, players take turns placing boats (workers) in spots along the river, but you can only ever place a boat downstream of your previous boat. So, if you want to grab a spot before your opponent but skip several spaces to do so, those spaces are no longer available to you this round, and your opponents know it and can use that to their advantage. After all workers are placed, then their effects are resolved. Most of the workers involve “coop-etition” in helping to build various types of Egyptian monuments (Pyramids, Obelisk, Statues), all of which offer different methods of scoring. Here we see that Egizia was an influential game in its own right: this part of the game seems to be almost directly copied and pasted into 2016 Spiel des Jahres nominee Imhotep, which uses not only the same theme but the same style of scoring for the same types of monuments. 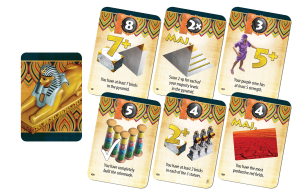 Another key thing that differentiates Egizia from many worker placement games of its time are the variety of cards. Some worker spots provide action cards that are one-time uses, some provide permanent bonuses, and Sphinx cards provide end-game scoring bonuses. I’m a card gamer at heart, and love when games have rule-breaking cards with cool effects. So, Egizia speaks my language much more than dice-leaning game like Stone Age or the more recent Voyages of Marco Polo. (My understanding is that many players considered Sphinx cards too powerful in the original game, but that issue was considered in the re-balancing of Shifting Sands.)

There are other now-classic trappings to Egizia: you have to feed your workers (although in a less annoying way than Agricola), determine when to improve your pool of workers, when to go for immediate points and when to play the long game, and so on. It’s not surprising that the game doesn’t feel original in 2020: it wasn’t that original in 2009. But that doesn’t mean it isn’t good.

In fact, perhaps my most important praise for Egizia is something that isn’t easily shown off. I don’t know how else to describe it other than to say that Egizia is tight. There’s no extraneous chaff in this design; it has exactly the right pieces in the right places and nothing clunky or extra laying around. Players can pretty quickly get into the groove of the game and begin to assess the situation in a way that leads to some tense back-and-forth battles while grabbing spots along the River. In the modern era of overwrought Eurogames, that is perhaps the most important trait that a classic design like this has to offer.

Egizia might have a few minor faults: the theme is overused; it’s a hair too long. However, it’s a game of deep strategy and interesting tactics that doesn’t get bogged down in complexity, exactly as a classic European strategy game should be. It’s still worth your time in 2020.

Thank you to Stronghold Games for providing a review copy of Egizia: Shifting Sands.