Review: Escape from the Aliens in Outer Space: Ultimate Edition 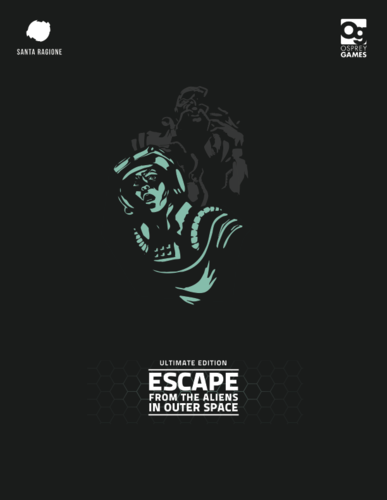 Escape from the Aliens in Outer Space is a hidden movement, bluffing game originally printed by Cranio Creations in 2010. Osprey Games reprinted Escape in 2016 as an Ultimate Edition, replacing cards, box art, and improving production quality, making booklets and other improvements.

Osprey Games is an imprint of Osprey Publishing, originally established in 1969. Osprey Publishing is a longtime book publisher, including many prints of war games and tactical historical military titles. Osprey Games first printed board game was The King is Dead, and has also published titles such as Escape from Colditz, Frostgrave, Odin’s Ravens, and the upcoming reprint of London by Martin Wallace. 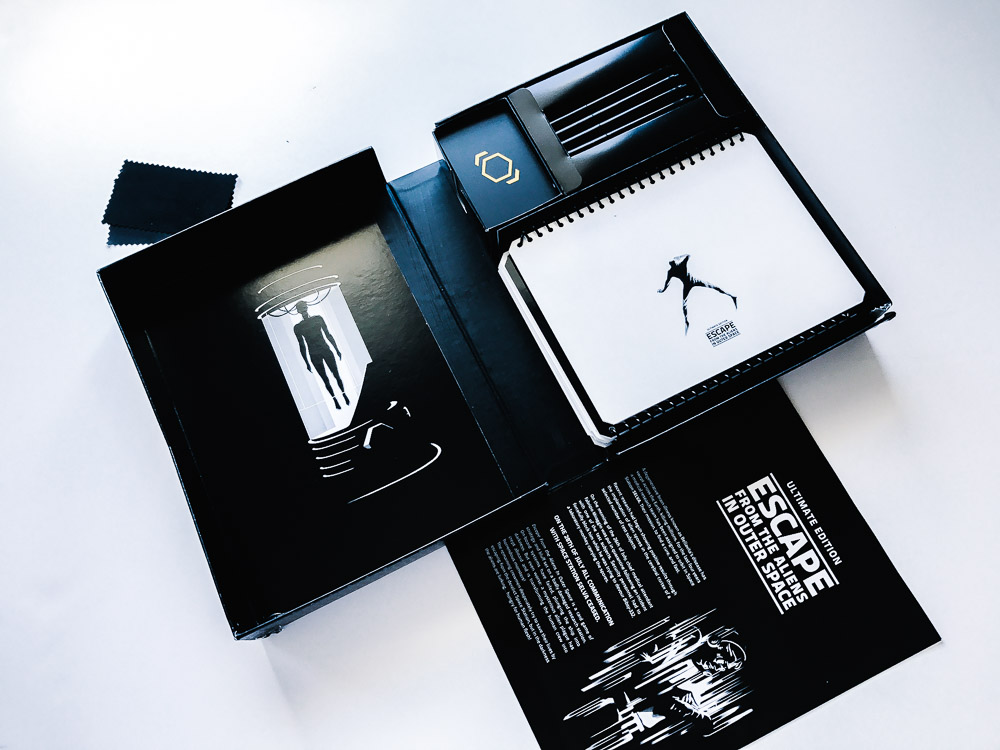 Escape from the Aliens in Outer Space creates a tense atmosphere and might not be suitable for younger kids. Theme includes humans turned into mutated cannibalistic creatures, and features somewhat abstracted artwork of these newly transformed beings. 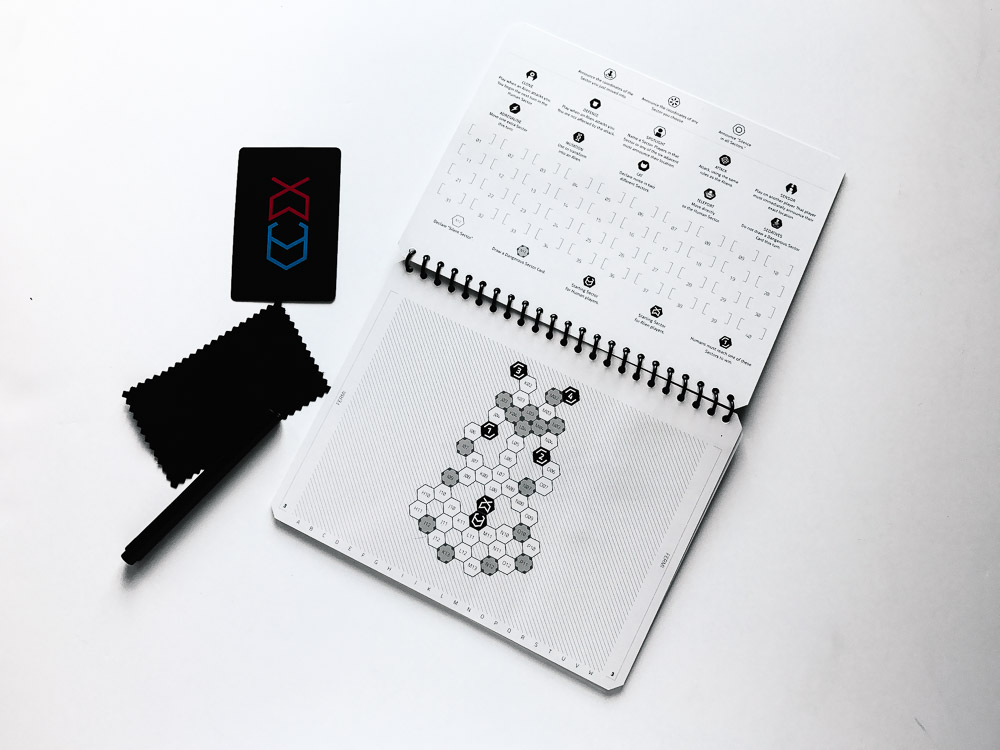 Escape from the Aliens in Outer Space pits players against each other, some friends, some foes, in a race to either escape or exterminate. 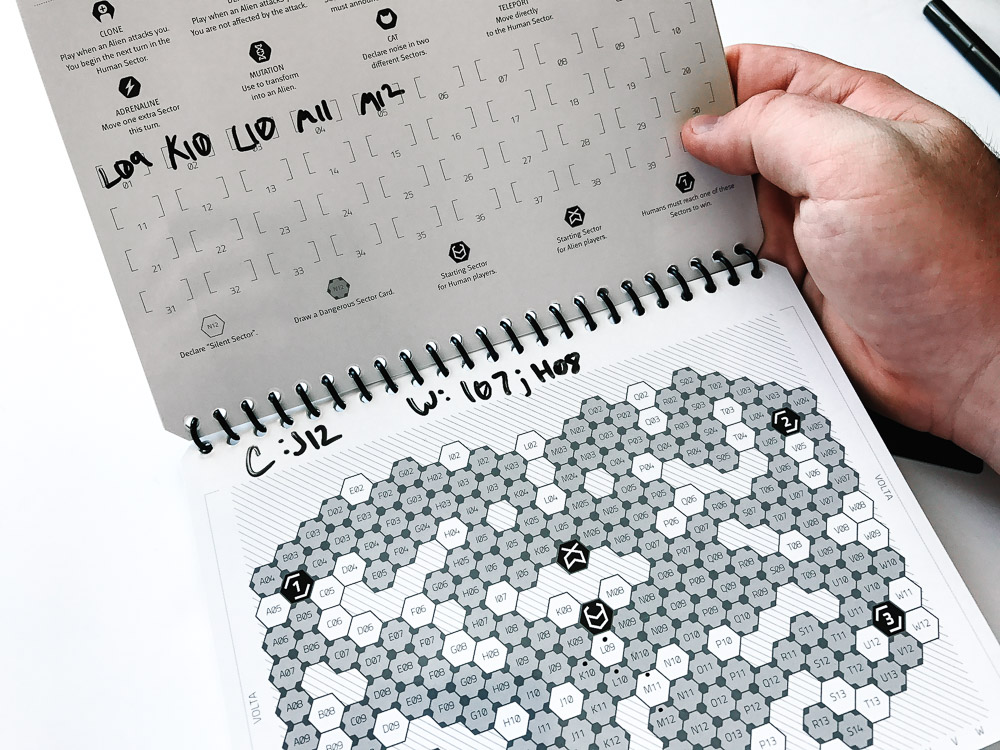 One of the many maps you’ll be marking up on your way off the ship… Or on your way to lunch.

Players are given maps of white erase boards with multiple pages, dry erase markers, and a secret identity. Players who draw a blue card are human and must race to the nearest escape pod in order to find freedom and win. Players who draw red cards are alien, and must find the human players and eat them. Humans are slower to move (one space a turn) but can use items they find on the ground, where aliens cannot use items but move one or two spaces a turn.

Unlike most games with grid-to-grid movement, Escape makes players move abstractly, using personal boards and markers. On moving, a player chooses an adjacent space on his/her board, and writes the coordinates into the allotted space above their map. Depending on the type of space they’ve moved into, the player may or may not draw a card. Silent sectors call the player to declare “silent sector.” Dangerous sectors force the player (human or alien) to draw a card.

Ultimately, players know you’ve stepped into a dangerous sector, which thematically might mean you’ve knocked over a tin can, echoing noise throughout the base, or maybe activated a motion sensor door or something. Three options are possible upon drawing one of these cards: 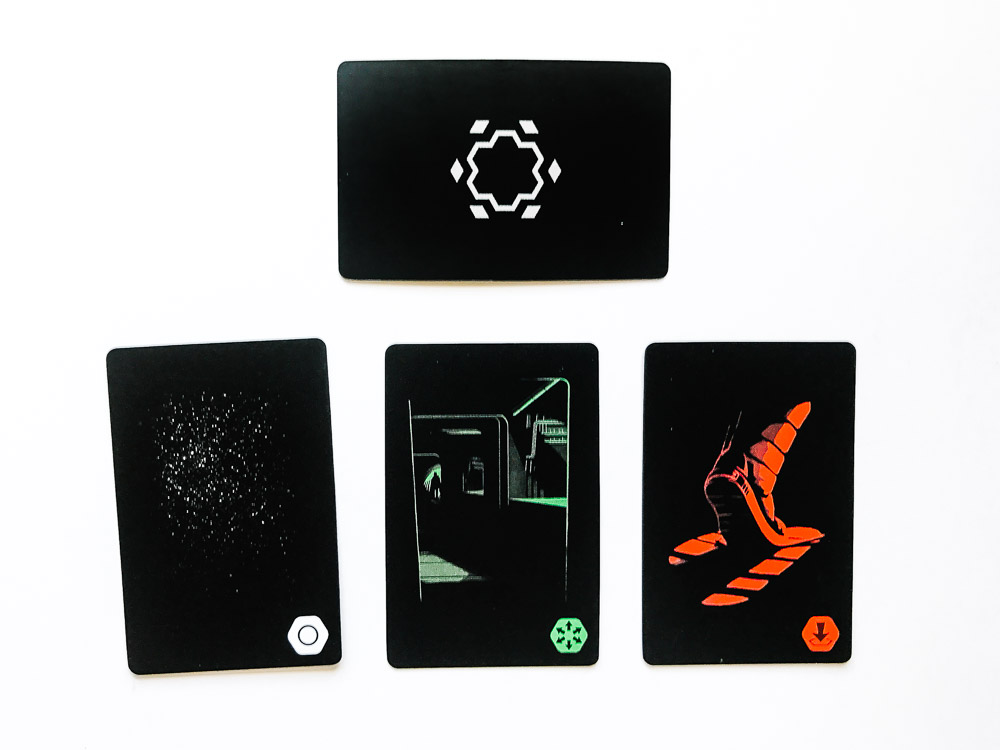 While white is probably your safest bet, both green and red present a puzzle to resolve, but you must do it quickly. The only saving grace of these cards is no one knows what you’ve drawn. If you announce “B10” and you actually are on “B9,” no one knows whether you’ve drawn a red and were forced to disclose your location, or if you drew a green and said “B10” to throw others off. Furthermore, it might not yet be clear if you are a human or alien player.

Aliens choose to attack spots by making their move into a sector and proudly declaring, “I’m attacking in sector X.” It’s a haunting moment, to be sure, and if they’ve successfully found another player—human or alien—the attacked must reveal themselves and their identity. If it was a human, they’ve been slaughtered, but now rejoin the game as an alien with a new card and a new objective. The killer now becomes powered up and can move up to three spaces. While I love the design choice to avoid player elimination here, it rears its head when an alien hits another alien. Species on species combat kills the attacked alien player, removing them from the game entirely. This mechanic is what keeps aliens from attacking every space they move to, which is what balances fast alien movement and slow human mobility. It’s not perfect, but it’s somewhat avoidable. 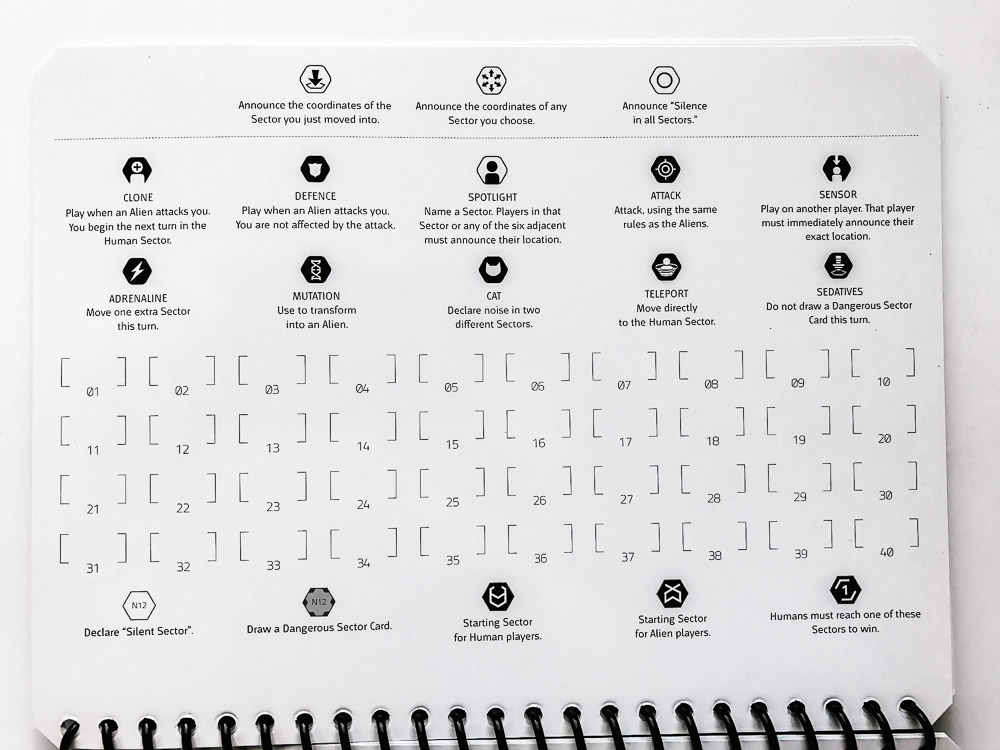 You’ll be marking this thing up quite a bit.

The tense atmosphere of Escape builds as players move from sector to sector, and identities slowly reveal themselves as some players attack and others quietly move from room to room. Items allow humans to teleport to their starting sector, utilize one attack, announce noise in a far away sector, and other things. Each character card also grants a unique ability, which might allow a player to avoid drawing their first dangerous sector card, or move an extra space once, or even be defended against the first attack on them.

Escape also features a jambalaya of different maps to choose from, each with specific climatic moments and strategies. Some feature many silent sector spaces, with only two bridges to pass in order to get to the escape pods, forcing a player to eventually pass through dangerous sectors. Other maps feature long hallways, where players must decide on a path, which will take anywhere from six to ten turns to cross, each space forcing the player to reveal some kind of information. Some maps are gigantic dangerous sectors, with lots of information being tossed around. Each map feels purposeful and features its own unique brand of tension.

Player interaction between maps and abilities is what makes the game. The more a group plays together, the more they learn each character’s ability and how the people around the table play. I might be known for always announcing where I’m at to throw people off, where another player spends multiple turns moving back and forth on silent sectors before waiting for their opportunity to dash for the escape pods. One human might attack a space with their one attack, only to have acted as a bluff to throw the aliens off their trail for a bit. 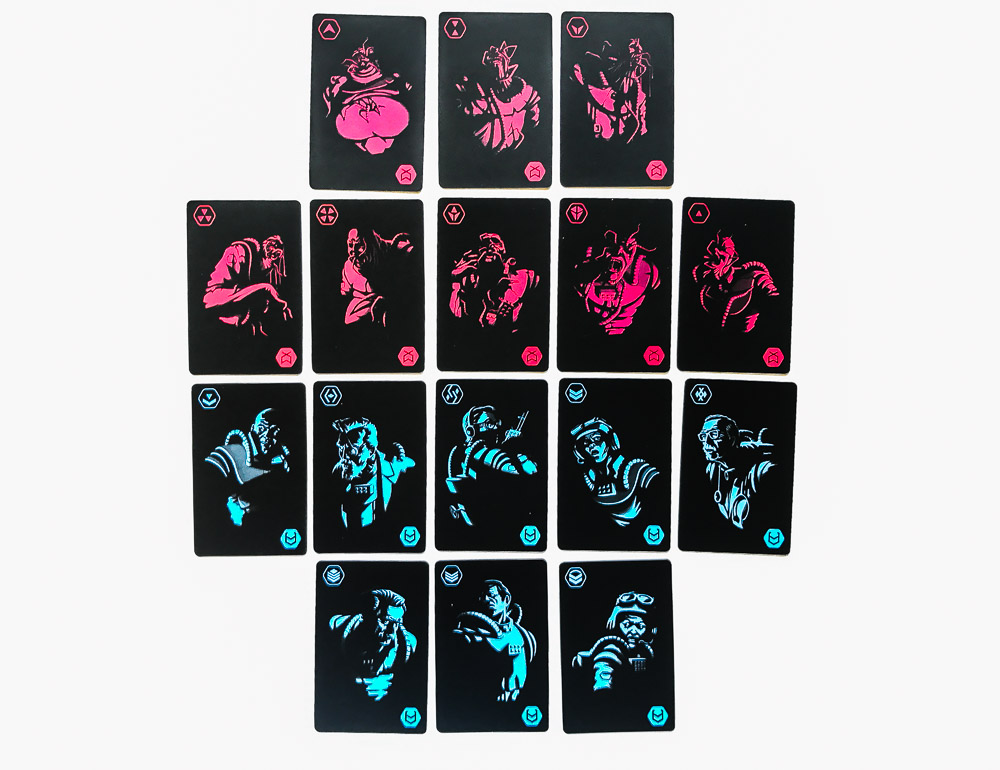 Many possibilities for player abilities add to the replayability of the game. Plus, you don’t know who has drawn what card.

As players die and aliens grow in number, the humans approach their chosen escape pod. Of course, they aren’t free quite yet. Upon entering an escape pod space, the player must draw one of five escape pod cards. Four of these shuffled pods/cards result in escaping the station, while the fifth card reveals a broken pod. This pod is unusable, and the player will need to find another pod to escape in. However, now all other players know where that player is located, since they need to announce their location.

Uncertainty looms over each decision. Because the game is somewhat abstract, it’s difficult to wrap your mind around where other players are moving and what they are planning. Unknown to you and others, you and another player might be moving onto each other’s space, or maybe back and forth, trading positions. The meta developing between games is reminiscent of how Alien Isolation’s alien learns how you play and hide. Cunning alien players will carefully listen to the cadence of your voice as you declare sector coordinates. Wise human and alien players alike will take notes on the sides of their boards, listening for patterns.

Anyone new to Osprey Games will be thoroughly impressed. Card quality is excellent and feels coated by some wonderfully tactile substance. Shuffling and holding them while announcing coordinates to the group is a good feeling. Player boards are coiled books, with exceptional attention to detail. Each page provides ample space to write your movements, alongside gentle reminders of iconography and what each item can do. The back of each booklet details each character type, providing quick reference. Box art is excellent and evocative of the theme as a horrified human runs from the nearly invisible embossed reflection of a hungry alien behind them. Dry erase markers are usually unreliable, so one might need to supply more of these after they’ve played a dozen games or so. 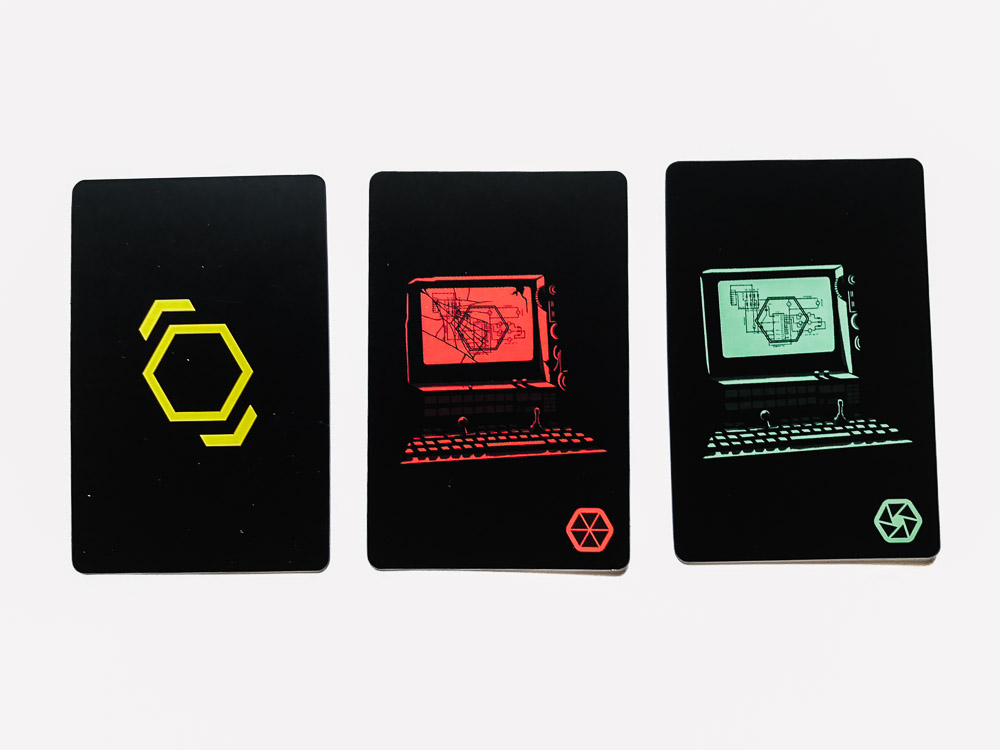 The clock ticks as you run to the nearest escape pod.

The rules manual takes care to explain the many situations that might arise as people play the game. Additionally, it advises which mechanics to leave out for early games, considering some might find confusing enough when learning their first hidden movement game. In general, it’s a wonderful rulebook that quickly teaches the game for you to play.

There are few things in my life I feel very strongly that I’m 100% correct on, and this is one of them: player elimination is NEVER a good thing.

This is why Monopoly sucks. This is why I don’t go to large group gatherings of Werewolf or Mafia. Does someone really go to a game of 40+ people to be voted out in the first ten minutes and sit and watch everyone else have fun? Wow, what a great way to spend your free time. The worst thing you can do to a fun activity is take the fun out of it. Should you play the game better so you don’t get eliminated quickly? Sure. Is it still a bad mechanic? Obviously.

As I’ve mentioned further up, losing an alien player balances the game. I wouldn’t enjoy this game if aliens would attack every space they move onto so nonchalantly. Where’s the suspense in that? The more aliens on the board, the better your odds for success. Perhaps a balance would be aliens can only attack every other turn, or are limited to a single move when attacking. Perhaps if you are killed by another alien, you return to the alien starting sector. I’d love to try some of these variations to help counteract player elimination, because it’s not good for anyone.

In addition, Osprey has provided continued access to an online map editor, where players can design their own maps and special game rules. Players can create super aliens that stack extra moves for every human they kill, or allow players to stand still on their sectors instead of moving, declaring “I do not move.”

Escape from the Aliens is nearly an essential title for board gaming enthusiasts. It’s simple enough to pick up and players will find lots of replayability with different maps, character powers, and intrigue. Despite my gripes with elimination, I think many hordes of board gamers will find hours of fun with this one.

A review copy of Escape from the Aliens from Outer Space: Ultimate Edition was provided by Osprey Games for a review of the game. 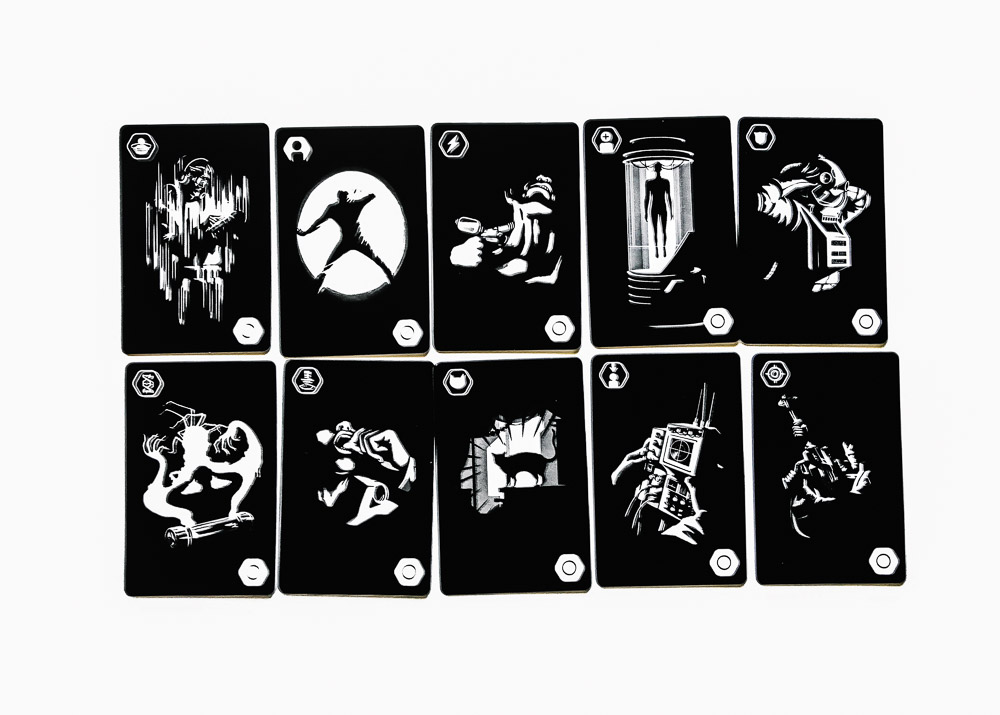 Escape from the Aliens in Outer Space: Ultimate Edition is a worthy hidden-movement/role game. Each game creates unique storylines and suspenseful moments to recall for weeks to come.