The Game of Deep Space Adventure 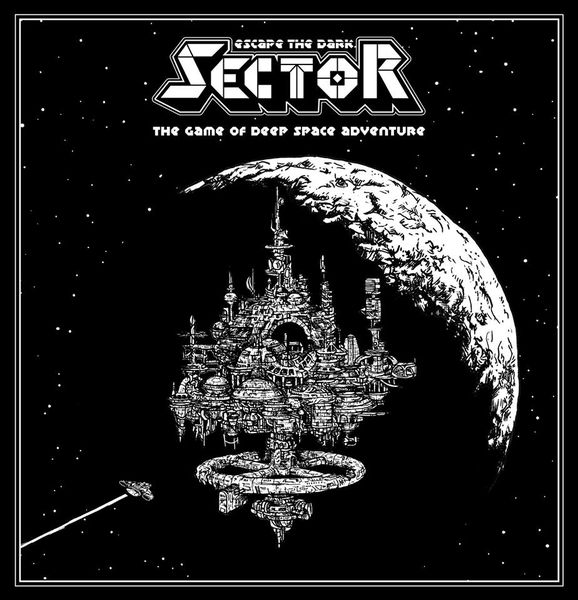 Escape the Dark Sector is an adventure storytelling game where players will read cards and decide what to do next as a group. This Escape is the second in the series, the first being Escape the Dark Castle, and it plays like a group Choose Your Own Adventure game, but with a serious sci-fi edge. In Escape the Dark Sector your crew has been captured and thrown in a cell block, and only by quick thinking and successful dice rolls will you make it back to the ship in one piece. 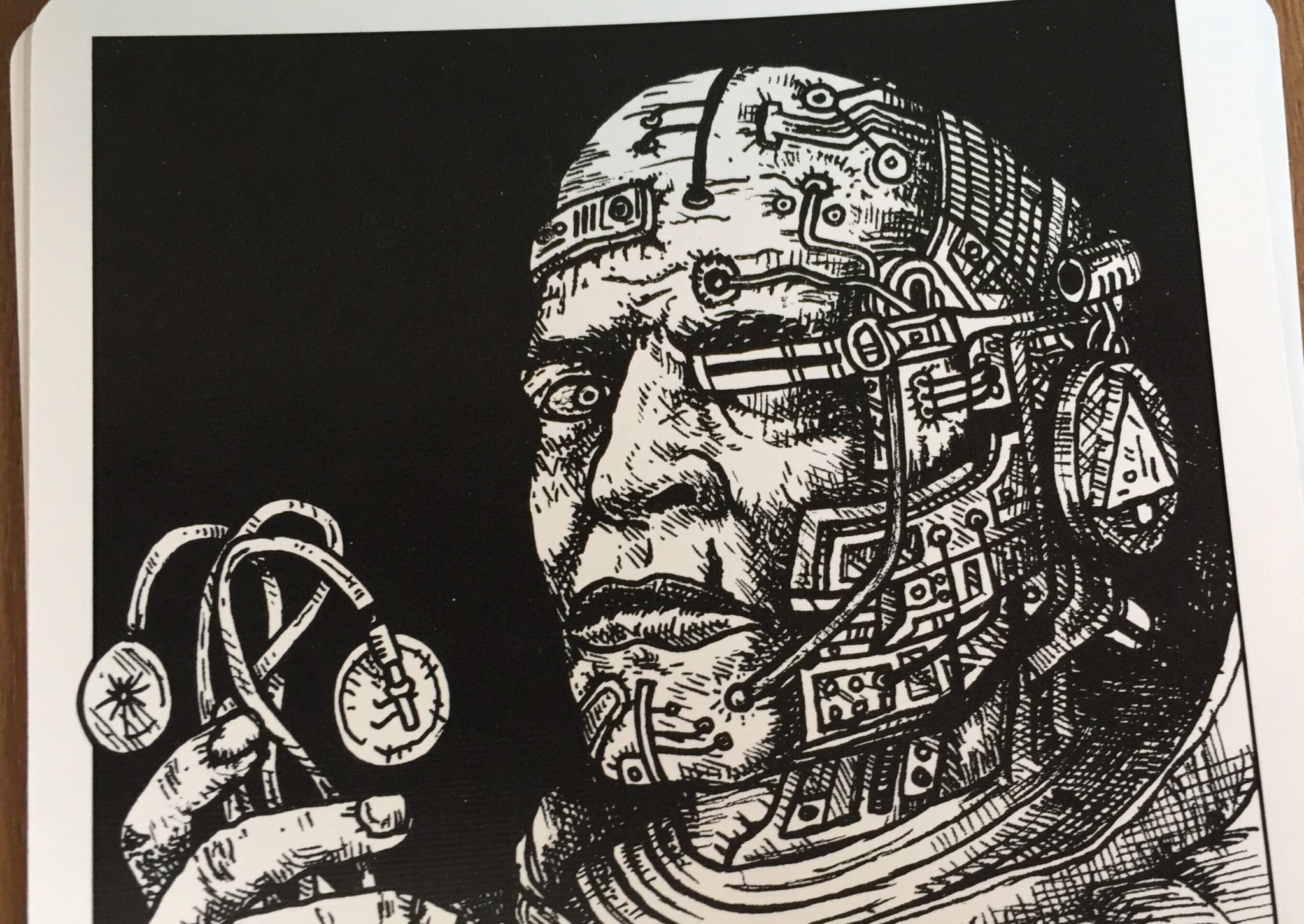 Some of the enemies you come up against include aliens, cyborgs, deadly robots, and acid-filled traps. However the pictures probably won’t bother anyone over the 14 year-old suggested age, and nothing gory is shown.

You will take damage, and chart it on a Medical Record. Sometimes it’s just described, and other times it’s shown on the card art. Players can take damage from bullets, weapons, aliens, toxic gas, electrocution, and other sources. If any player’s character is killed, the game ends in failure.

I love how much choice is packed into Escape the Dark Sector. Players’ crew consists of 4 members, but there are 6 different crewmembers to choose from, each with different strengths and weaknesses. Only 1 start card and 1 boss card are used each game, but there are 3 and 5 of each of those, respectively. The cards used for each act of the game have even more variability. This meant that after 3 plays I still hadn’t seen a duplicate card once, and I could play again with only repeating 1 start card. Escape gives you a plethora of options, even from the setup. 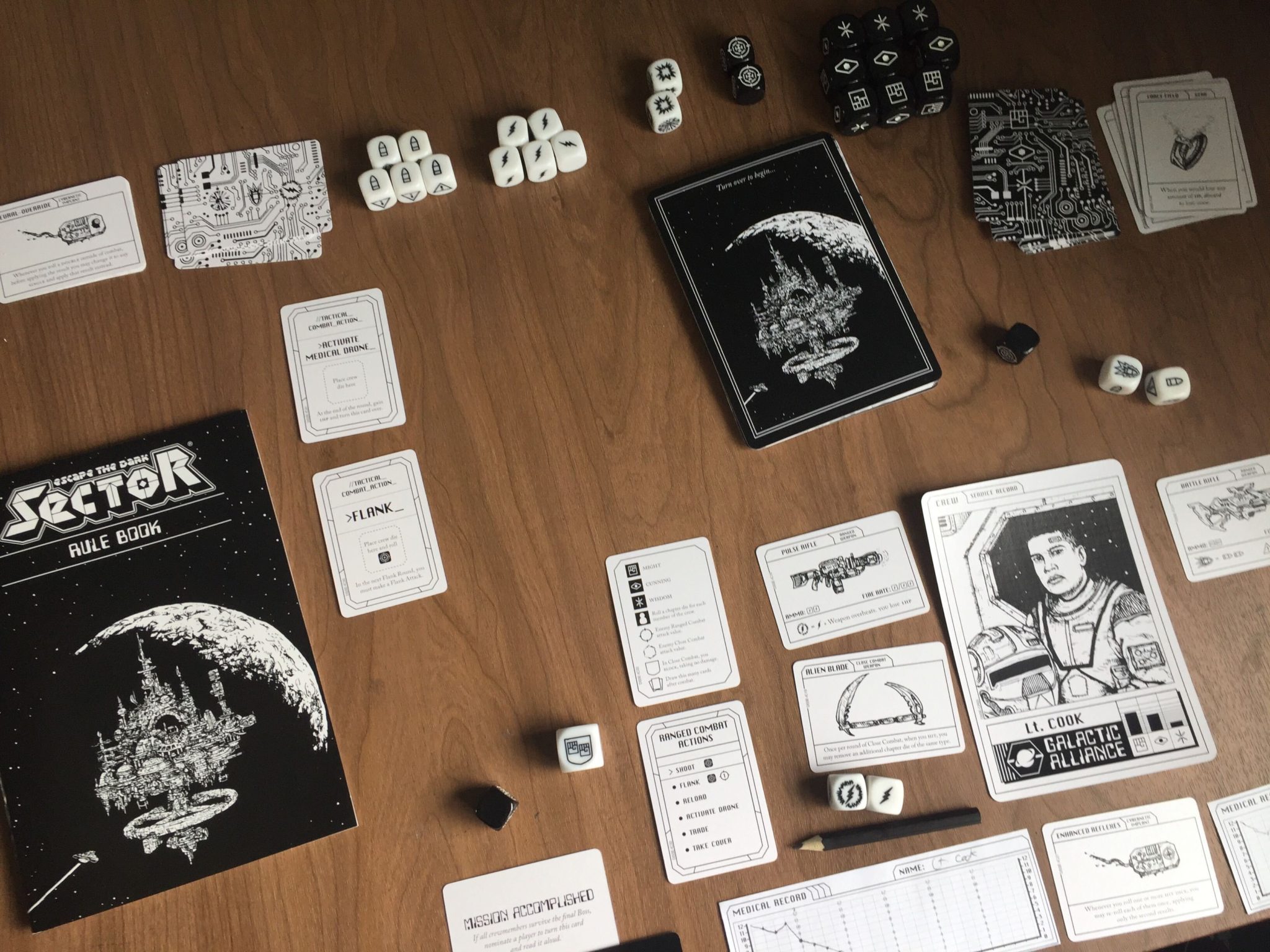 Once you’re playing you’ll be given options on any card you flip over. On occasion some decisions are made for you (e.g. an enemy might surprise you, forcing you into close combat immediately, or you may be asked to test a specific trait). Often, you will be asked to test a skill, either might, cunning, or wisdom, and depending on your success or failure you may be rewarded with safe passage or items, or you may be injured or forced to fight. Thankfully, even though winning the game is an uphill climb the designers built in a failure-loop exit to most scenarios – often after failing at a test that injures you, after the third failure you get mercifully shunted into the next scene. I’ve seen a card that had the potential to injure up to 5 times, but most of them aren’t that harsh. 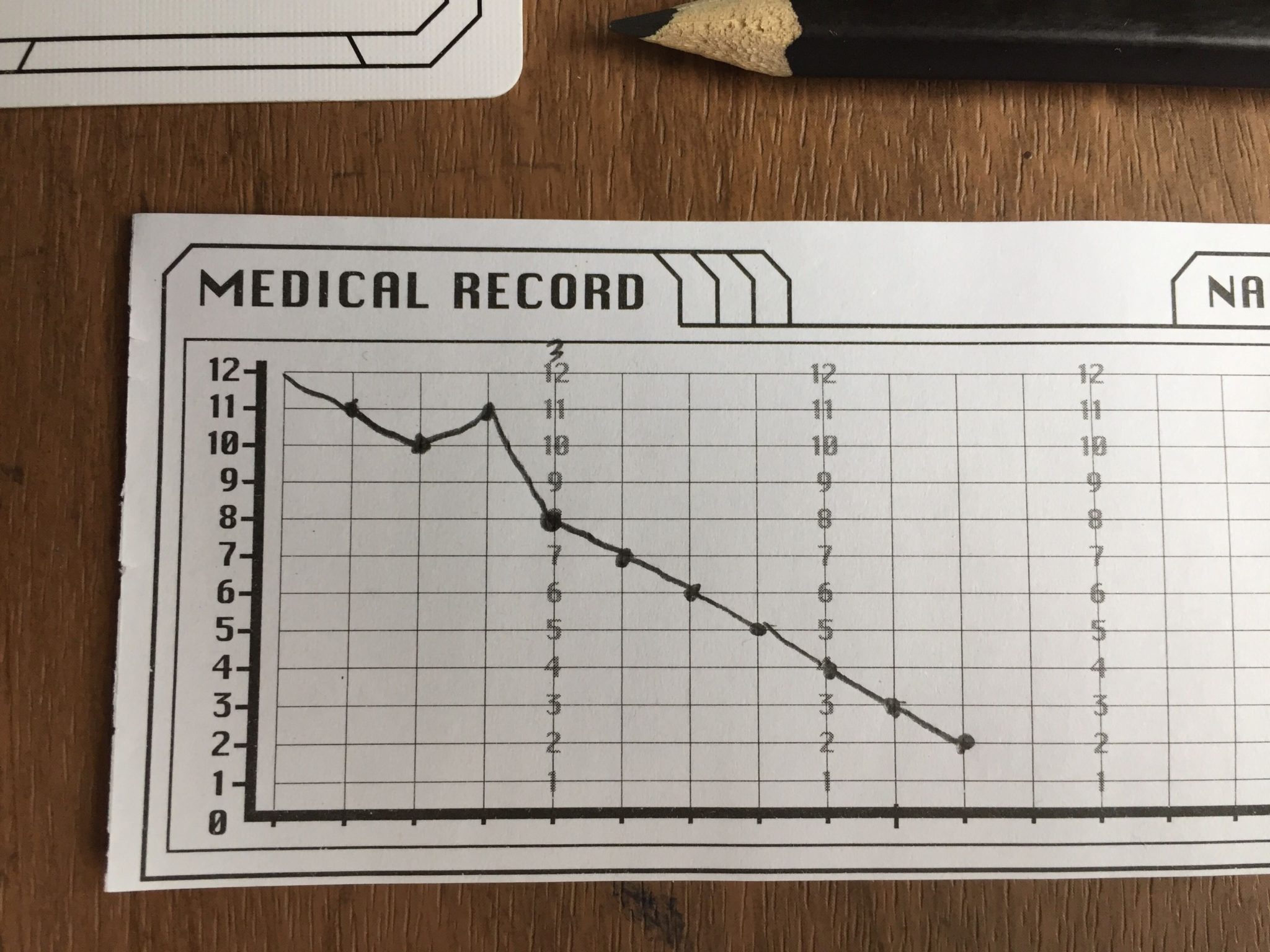 Note to self, Heal more often…

Combat can be either ranged or close, but once you engage your opponent(s) in close combat then ranged is off the table. Some encounters will dictate which you get to start with, or also give you the option to run away. In ranged combat at least 1 player must choose the “Shoot” option, rolling the ammo dice associated with their weapon and fire rate of their choosing. Weapons can hit, jam, or do double damage. Players can have up to 4 weapons/items, but can only use 2 hands’ worth in a given round (some guns, for example, might require both hands to use).

Then they must roll a hit die to see if they took any damage themselves, referencing the chapter card to see how much damage. Any damage the players cause lets them remove chapter dice from under the encounter; these act as health for the enemy. In close combat players will roll their character dice, and only by matching the symbols on them with the remaining chapter dice will they defeat the enemy. I’m glossing over a couple rules, but the bottom line is: you’ll be reading and rolling dice every time you flip over a chapter card. 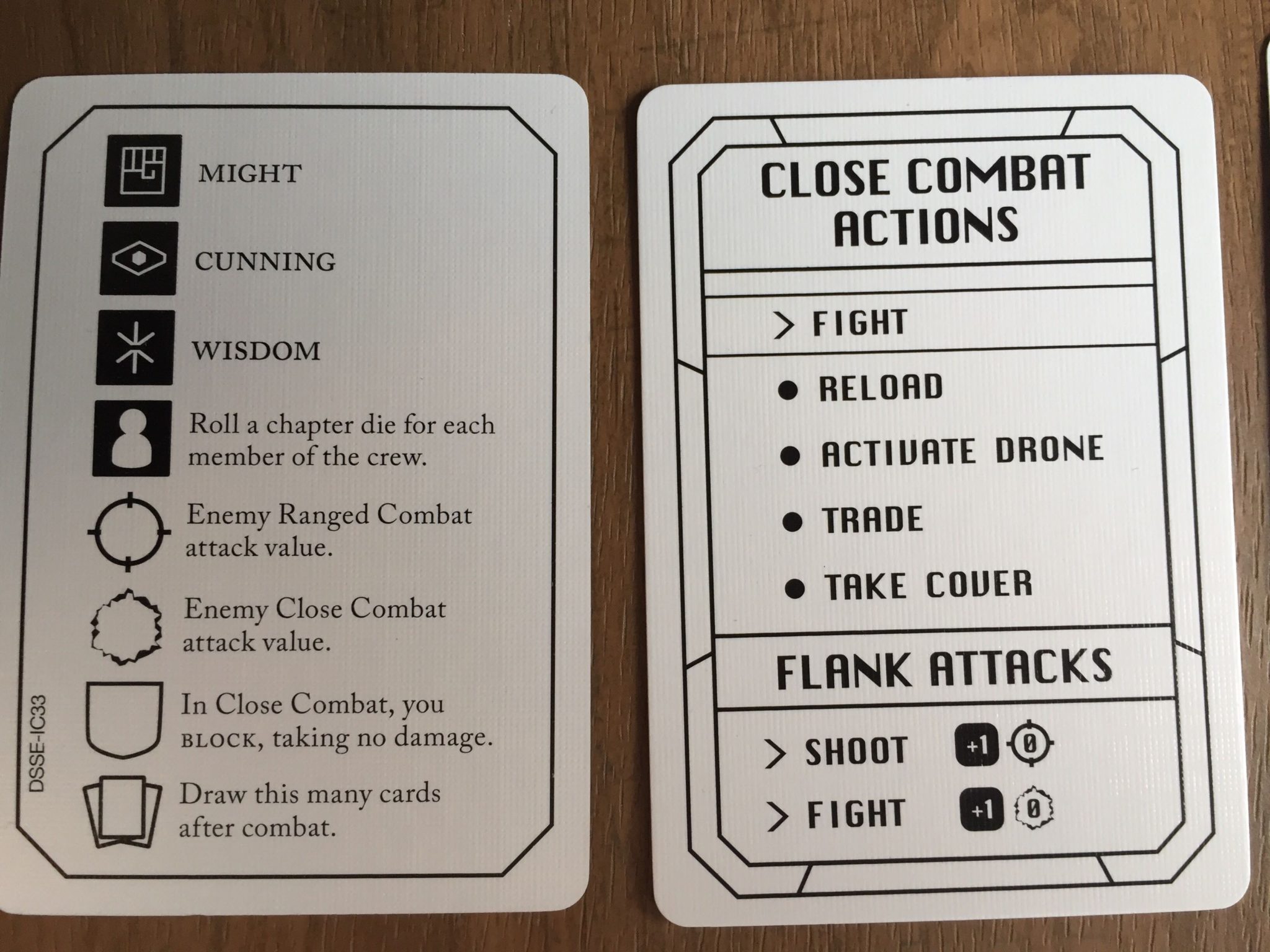 Unfortunately that also brings me to my big gripe: the chapter and crew cards are an oversized tarot-style, and came warped in my copy of Escape. It didn’t keep me from enjoying the game, but I feel like I’d be remiss for not mentioning it. The rest of the cards feel nice and thick, and good quality, so I don’t know if it’s a problem just due to their large size. I also wish the game included more than 1 set of reference cards, but that’s a tiny complaint. The art is a black and white hand-drawn style that feels retro in a good way, and the backs of the crew cards look like they were made with old Apple computers. 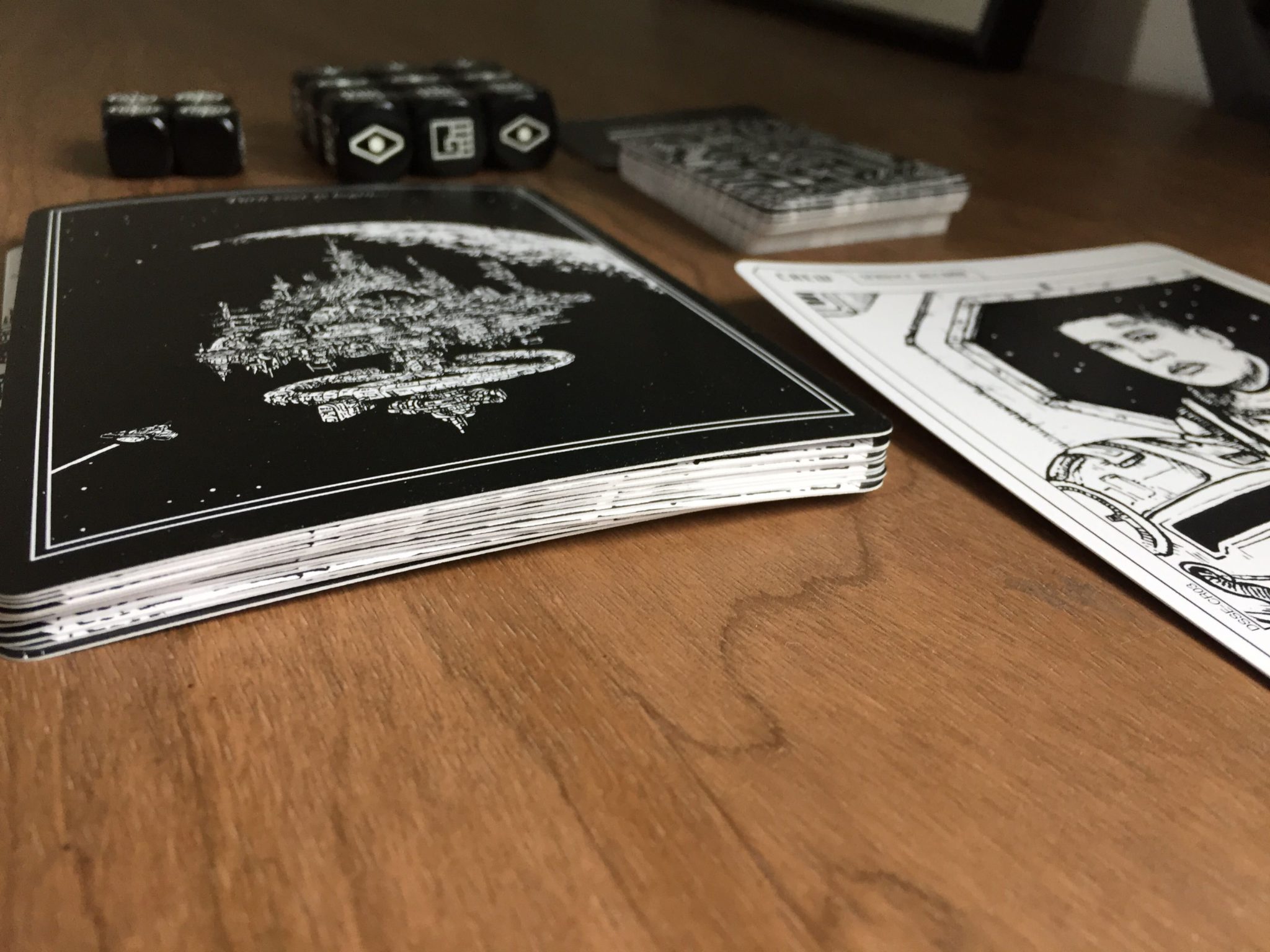 Escape the Dark Sector is a difficult game. Often you may find yourself presented with difficult choices or temptations to push your luck in hopes of finding more gear at the cost of your crew’s health. But without outfitting yourself with the best guns and gear, you won’t stand a chance against the boss fights. It is a deeply thematic experience that makes me want to seek out its predecessor, Escape from Dark Castle. The dice-rolling and card-reading might not appeal to everyone, but if you love science fiction and Choose Your Own Adventure books, give this one a look. 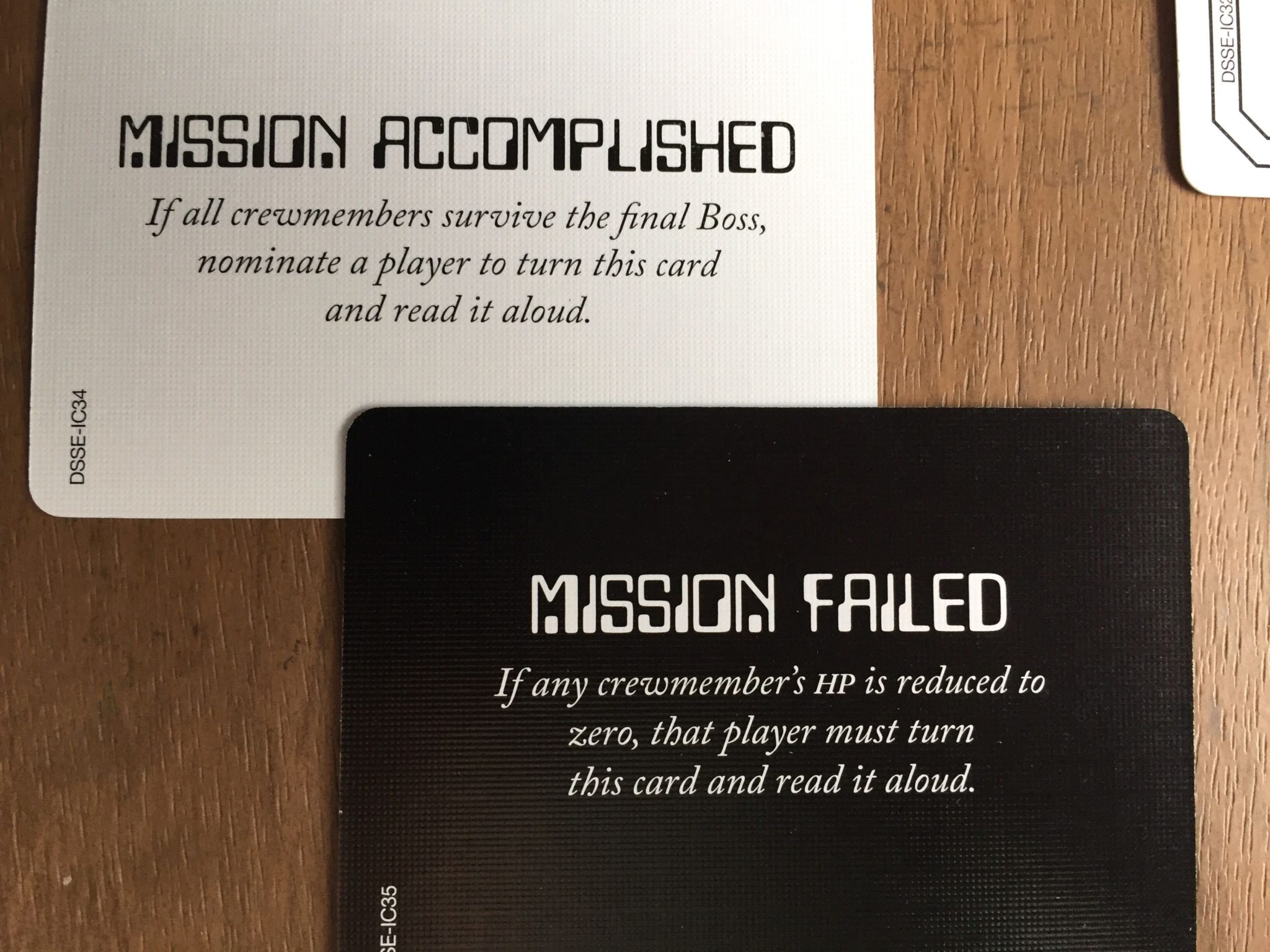 You’ll be reading ONE of these every game…

The dice-rolling and card-reading might not appeal to everyone, but if you love science fiction and Choose Your Own Adventure books, give Escape the Dark Sector a look.