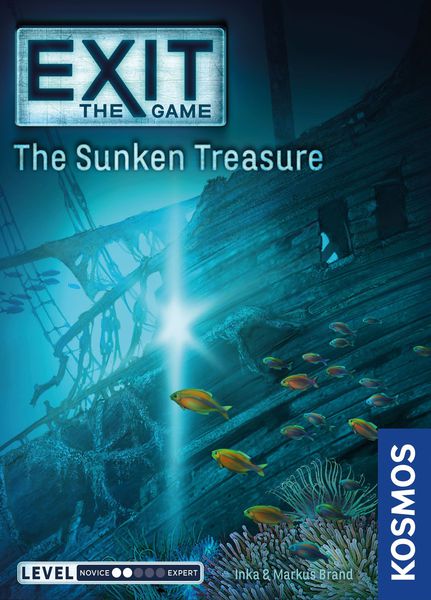 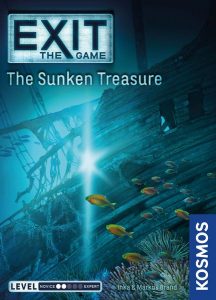 To wrap up my series on EXIT: The Game season 3, The Sunken Treasure is a very kid-friendly entry in the series. It is enjoyable to play, but far simpler than most of the other EXITs.

For the third and final installment of my mini-review series, I will be covering EXIT: The Sunken Treasure. This game of deep-blue adventure has players hunting for the legendary wreck of the Santa Maria and all its riches.

Like The Mysterious Museum, the progression of this game is linear – that is, each puzzle is a self-contained challenge, the completion of which allows players to advance to the next page. The box comes with the usual book, cards, and solution wheel, but also contains some punch-out items and colored gemstones.

With a 2-out-of-5 difficulty rating, it’s no surprise that this we breezed through this game; it was the easiest one I’ve played in the series. The puzzles were still fun and entertaining, but they did not require nearly the same brain-power as Dead Man on the Orient Express. This is not necessarily a bad thing, however. I actually think it presents a newbie-friendly introduction to the series.

When we played Orient Express, we had two players who had never played an EXIT game before and frankly, they were a bit overwhelmed. The Sunken Treasure would likely have been a much better choice to ease them into the series. (Hindsight, as always, is 20/20.) If you are playing with kids or folks new to gaming, this one would be a great starting point. I say that for a few reasons:

To be honest, the thing that most impresses me about these games is the fact that they still feel fresh. Considering that each EXIT game has basically the same core system, one might expect that they would start to feel repetitive after a while. Happily, though, each one provides new, engaging content that leaves me wanting to play the next one. To me, this is a sure sign of the thought and care that went into crafting them.

I enjoyed each of these games for different reasons. The Mysterious Museum offered some really memorable puzzles, Dead Man on the Orient Express presented a particularly difficult challenge, and The Sunken Treasure was a laid-back, easygoing experience.

With a total of six under my belt, I am still really enjoying the EXIT games. I can’t wait to see what other adventures the series has in store.

The Sunken Treasure is a good introduction to the EXIT series. While it is on the simpler end, it has some memorable puzzles.