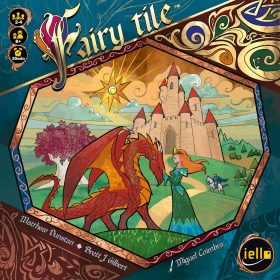 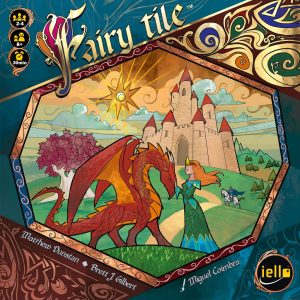 Fairy Tile is a light family game from IELLO, a company best-known for making King of Tokyo. Featuring a great theme and amazing artwork, this fantastical game is ideal for younger audiences.

IELLO has always done a great job with their kids’ games. Their latest, Fairy Tile, puts two to four players in a fantasy adventure with a beautiful Princess, a fearsome Dragon, and a brave Knight.

The game is played on a hex grid, representing a magical kingdom. The board starts small, consisting of only nine spaces, but it will grow and expand throughout the game. The three character figures begin on their indicated spaces, and each player receives a set of objective cards. Their goal is to complete all of their own objectives; the first person to do this wins. At the start of the game, the board looks like this: 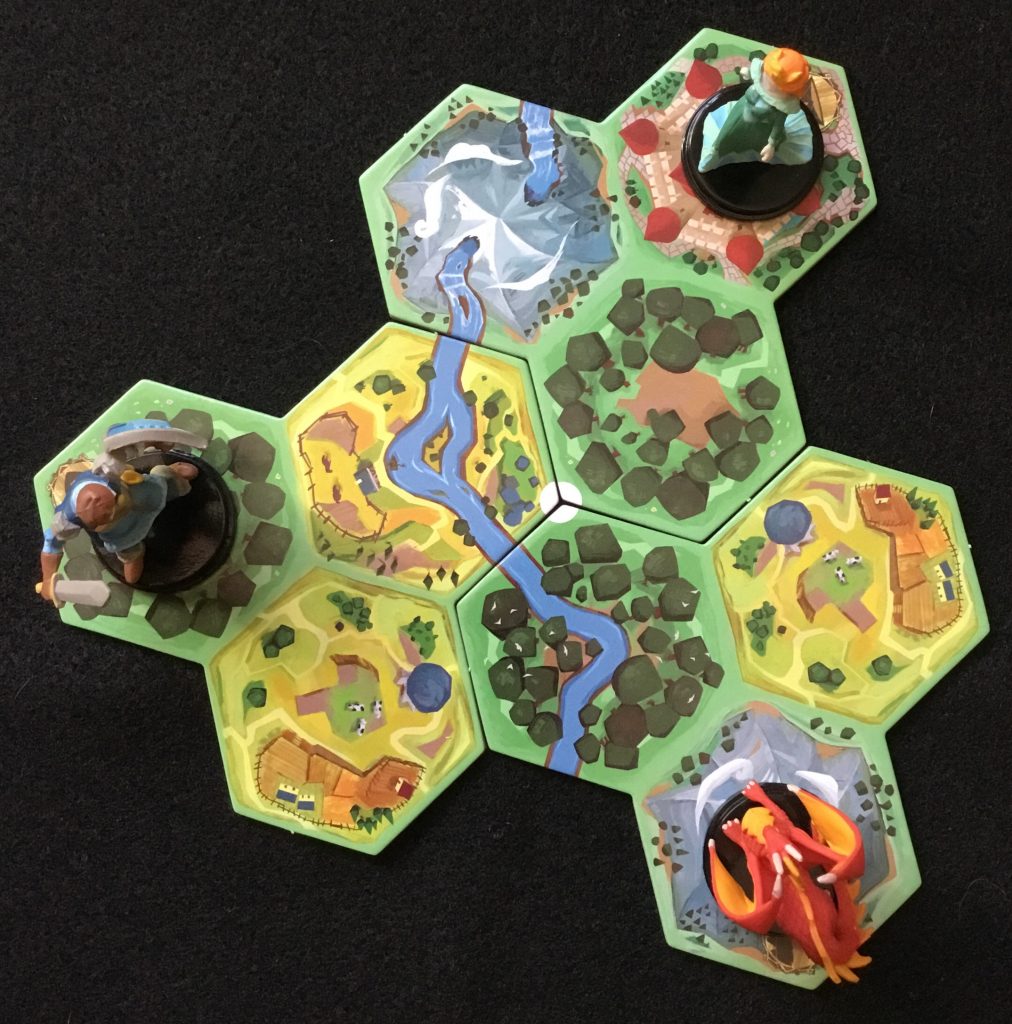 All players receive a “magic” token, which begins face-down, and they each draw the top card of their own objective deck. These cards list specific goals such as:

On a player’s turn, she may either “go on an adventure,” which allows her to add a tile to the board or move a figure, or forego her turn to get a new objective card and activate her magic token. If a magic token is active (face-up), its owner may spend it (turn it face-down) to take a second action immediately. Put another way, if a player chooses not to take an action in one round, she may sock that action away to use on a future round.

Each figure has its own movement rules:

If, by adding a tile or moving a figure, a player accomplishes her current objective, she reveals the card, sets it aside, and draws a new one. If it was her last objective, she wins. 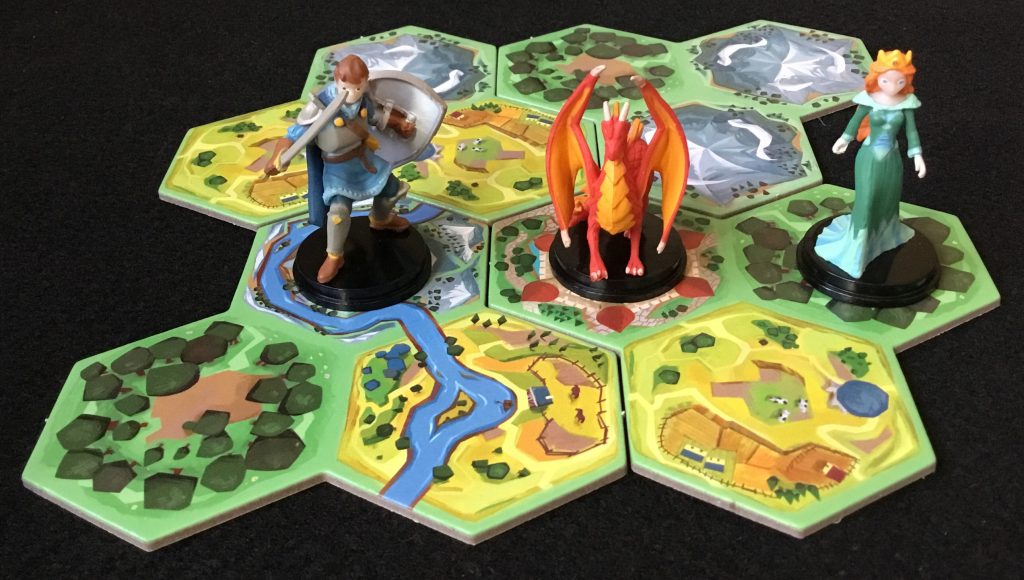 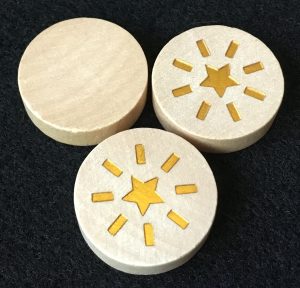 This game seems to follow in the footsteps of IELLO’s Tales & Games series. The whole notion of that line of products was to distill well-loved children’s stories into meaningful gaming experiences that work with kids and adults. Though not formally a part of this line, Fairy Tile gives me the same vibe. (And that’s a good thing; Tales & Games: The Hare and the Tortoise is one of my favorite racing games!)

Fairy Tile looks great on a table. The components are stellar, the art is nicely stylized, and the theme really comes through. In all my years writing game reviews, I don’t think I’ve ever commented on flavor text, but this game uses it in a very cool way. Each objective card is numbered, and its flavor text is organized chronologically within the fairy-tale narrative. The text on card #1 begins the story, and each successive card continues it. This means that, at the end of the game, each player can organize their objectives numerically and have a relatively-cohesive story to read. This of course has no bearing on the game mechanically, but it’s a really unique touch.

Being limited to one action per turn can make objectives difficult to complete. The ability to use one’s magic token to get a second action is critical, and players will likely need to exploit this ability in order to win.

Fairy Tile definitely involves some luck, though. Sometimes, the board-state just happens to be exactly what a player needs to complete her objective. Additionally, in three- or four-player games, things can change a lot in between one’s turns, so players’ best-laid plans might not work out. As such, I think this game is ideal as a two-person experience, because players only have to contend with one opponent’s moves. It gives them a bit more control.

I had fun with Fairy Tile, but after a few plays, I felt like I had explored everything the game had to explore. Thus, I’m not sure how well it will hold up long-term, especially in game groups consisting of adults and/or experienced gamers; there might not be enough “game” here to keep those folks engaged. However, since it seems to be aimed at a younger audience, perhaps I shouldn’t be looking at it through my “gamer goggles.” When viewed as a game for kids, I think this one works well. It lends itself to family gaming, and I recommend giving it a try, particularly if younger players are involved.

A review copy was provided by IELLO.

Fairy Tile is an enjoyable game. It's light and quick, definitely in the "family" category, but it has some very unique ideas.