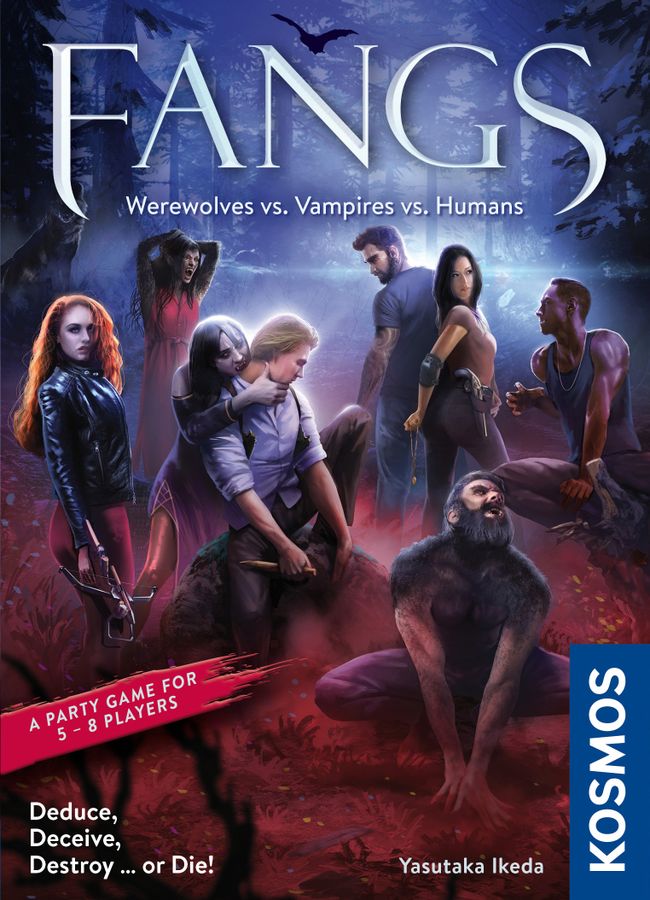 Fangs is a remake of the semi-obscure party game Shadow Hunters. In this game, players are secretly assigned to 1 of 3 teams: Vampires, Werewolves, or Humans. Each team has a particular objective, but players begin the game knowing only their own identity. As gameplay progresses, they must deduce who their teammates are—and their enemies!

When Shadow Hunters came out in 2005, there were very few games like it. Besides Shadows Over Camelot, which debuted the same year, Bang!, and the classic Werewolf, hidden role games were rare. (It would be several years before The Resistance would come along.)

Fangs is a 2021 reworking of Shadow Hunters. In this team-based game, every player receives a role which puts them on either the Vampire, Werewolf, or Human team. Each team has their own objective: the Vampires and Werewolves want to eliminate each other, and the Humans just want to survive the fray. At the start of the game, each player knows only their own identity.

The game’s geography is a tableau of 6 location cards dealt in a circle. Each location bears 1 or 2 numbers, along with iconography showing the location’s special action.

On a player’s turn, they roll 2 dice—a d4 and a d6—and add the results together. Then, they move their character token to the location showing that number; on a roll of 10, the player can move anywhere. Each player must change locations every turn, so if someone rolls their current space, they must reroll until they get a new location.

Then, once the player has moved, they may take their new location’s special action. These actions include:

After the player has chosen to take or forego their location action, they may attack a player in the same space. Combat is simple: the attacking player rolls both dice and subtracts the lower number from the higher number. The result is the base damage value, but cards in players’ possession may influence the outcome.

If a player sustains damage, their token is moved up the damage track. Should a player’s token reach their initial on the track, their card is revealed and they are eliminated from the game.

I always enjoyed Shadow Hunters in the past, but had not played it in years, so I was thrilled to revisit it in a new edition. Despite being more than 15 years old, this game still holds up as a solid social deduction experience. Fangs has more going on than, say, The Resistance or One Night Ultimate Werewolf, but it offers deeper gameplay than those games. This may be, in part, because at the start of the game, no one knows who anyone else is. Unlike many other social deduction games which begin with an “eyes closed, eyes open” phase, no one has any starting knowledge except their own identity.

The production quality of Fangs is nothing eye-popping, but it works functionally. The atmospheric art brings out the theme and the rulebook is clear-cut. Personally, I prefer the manga-inspired look of Shadow Hunters to the “teen movie” feel of Fangs, but that is purely opinion-based. (For what it’s worth, the dice in Fangs are cooler!)

This game feels more interactive than most games in its genre, likely because it involves direct, player-to-player conflict rather than just debate about who at the table looks the shiftiest. Also, unlike many other social deduction games in which it is hard to know anything for certain, Fangs sometimes offers definitive information, usually via Oracle cards.

For fans of social deduction, Fangs is definitely a game to look into. It provides a different experience than most other games in this category, so while it may not be my absolute favorite—The Resistance is my #2 game of all time—it’s one I will reach for when I’m looking for change of pace.

Fangs provides a deeper experience than games like The Resistance and One Night Ultimate. Recommended for folks who enjoy the social deduction genre but want a little more out of it.