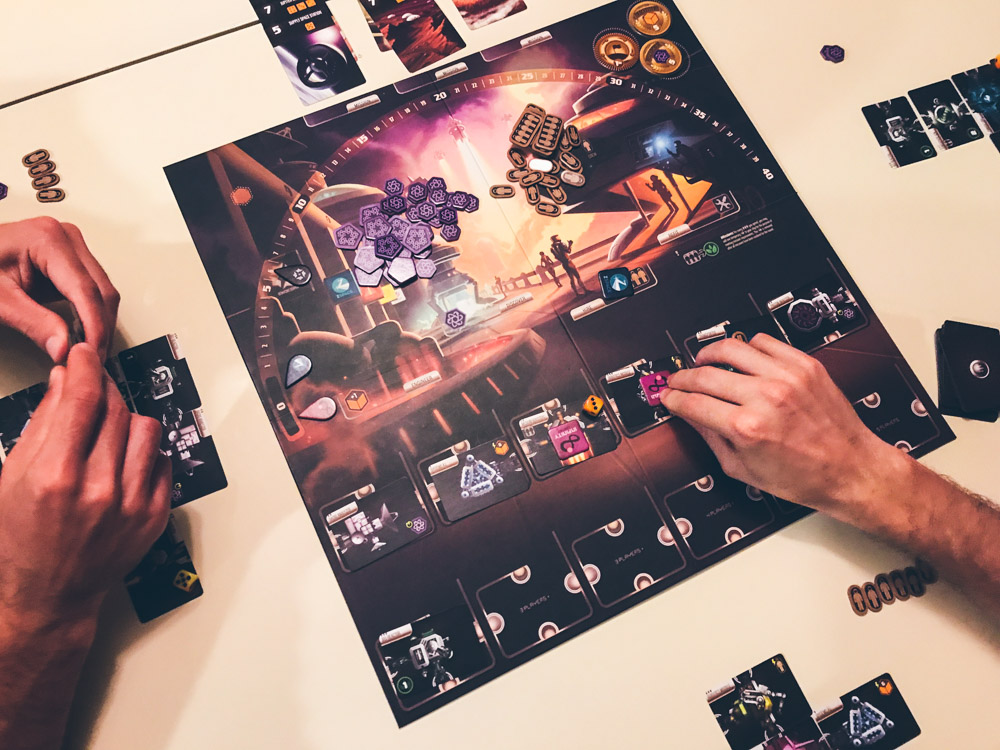 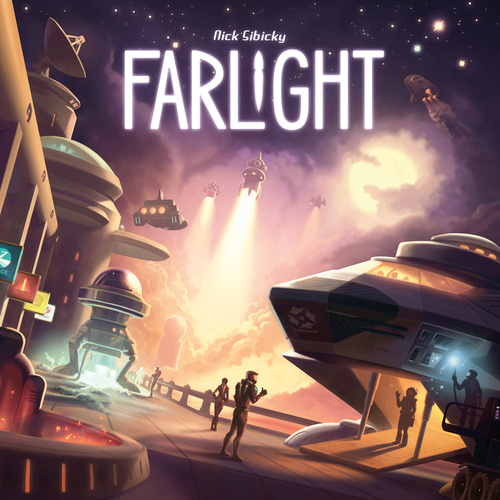 Farlight is an introductory auction game for 2-5 players from King’s Forge designer Nick Sibicky. Sibicky has also designed 10 Minute Heist: The Wizard’s Tower, along with a plethora of expansions for King’s Forge, including: Apprentices, Glasswork, Queen’s Jubilee, and more.

My wife edits my reviews before we go to publication, so it’s interesting to drop little notes in reviews for her to see. Sometimes it’s inside jokes or a word of the day from Merriam-Webster’s website (to expand my writing vocabulary of course), but I can only imagine the loving eye-rolling once she reads the next line I’m about to type. 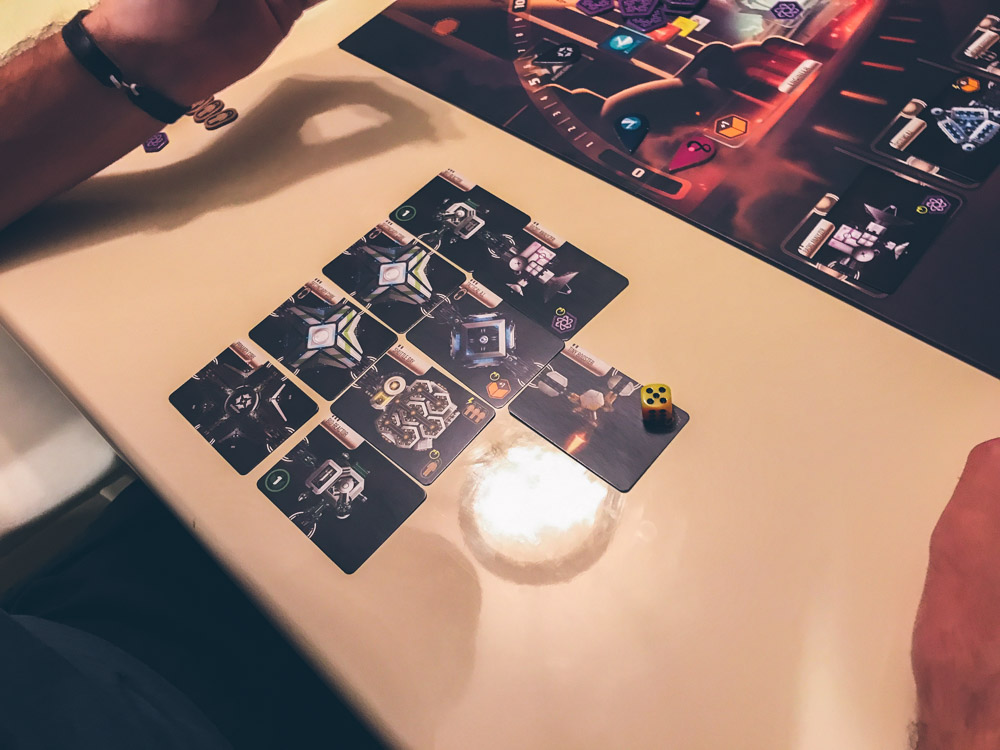 If you’re going to space, you’ll need a ship.

It all started when I stumbled upon /r/space on Reddit. Suddenly, I grew increasingly curious about the exponential distances between stellar bodies and learned of a set of probes (Voyager I and II) that the United States launched in the late 90s to explore the far reaches of our solar system. I’ve always had passing interest in science fiction—particularly Star Wars—but never thought much about the real implications of space exploration or our stellar blueprint on Earth. Skeptical friends of mine without real investment in the study of the universe might ignorantly scoff, but five minutes in Space Engine could quickly turn any regular day into an existential crisis.

I’ve found a bit of glad solace by satisfying my craving for things extraterrestrial by playing games like Mass Effect, Empyrion: Galactic Survival, Stellaris, or Elite: Dangerous. These games have more focus on the entirety of the Milky Way or further, but don’t have closer focus to our solar system, or what is realistic. Imagine my excitement when a copy of Farlight arrived in my mailbox.

Farlight puts 3-5 people around a table and gives them space-faring goals for the Sol system. Players run corporations tasked with space exploration and colonization, and must hire crew and gain science while outfitting their vessels to complete special missions and gain esteem and honor. The player gains the most victory points wins the game. 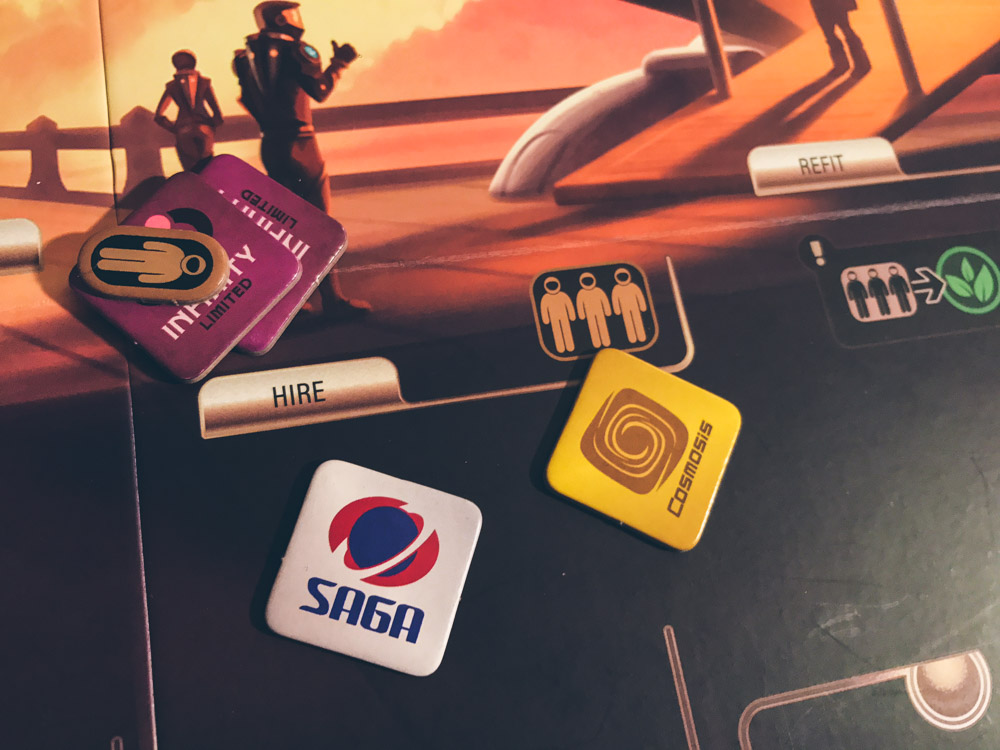 Each tile holds mystery. Anything from 0-4, plus a bonus point for using a crew member.

The crux of Farlight is all in the auction. Players take turns placing face-down tiles on action spaces along the board. These tiles range from zero to four, and once all tiles have been placed, players flip tiles and those with the highest value win the action. Actions might be simply picking up crew, increase engine value, gaining parts to add to a player’s ship, or even accepting the chance to complete a mission.

If you’ve got a group of friends unfamiliar with auction and bidding systems in games, look no further. For me, Farlight has become nearly the perfect introduction to learning auctioning mechanisms in tabletop gaming. Many bidding games put misinformed players in a bad spot when they misjudge the value of an action because the player can lose precious resources. Farlight is extremely forgiving. With no monetary resources to speak of, players who lose out on highly contested bidding locations simply take their tiles back and receive an extra crew for each (non-zero) tile they spent. Consecutive turns of losing actions can be to the demise of a player’s chance of winning, but this still compensates for low skill level. 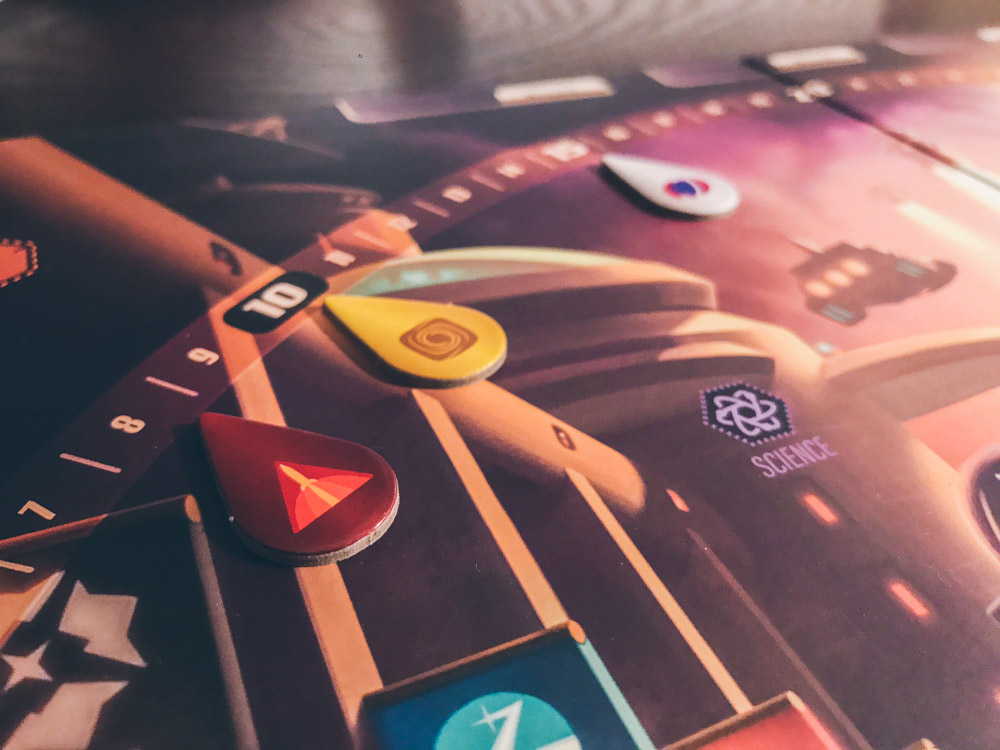 This space speedometer shows the gap in points.

The bluff of Farlight is one of the more enamoring prospects the game presents. Players need crew to grab certain ship parts, but can also spend a crew member to up a bid tile by one point. One might spend a crew with a zero value tile on a ship part that another player has voiced their desperate need for. This low bid of one doesn’t mean much, but might force the opposing player to overbid, only to later find they’ve been duped. This makes for many hilarious “gotcha” moments, but also provides a lot of depth.

Farlight has quite a bit of variability. Each game features a thick stack of ship cards and missions. While one might see some of the same cards in two different games, the order they appear makes each game noticeably different. Sometimes engine cards are scarce, which means high confrontation over a single part. Other times, bids are spread evenly on parts, but engines seem to be critical for mission success. Additionally, the unknown of what players hide underneath their bidding tokens makes each game unique. Sure, players can develop a meta for which actions and cards they tend toward, but ultimately learning how others play and bid is a key feature in what makes Farlight consistently interesting. 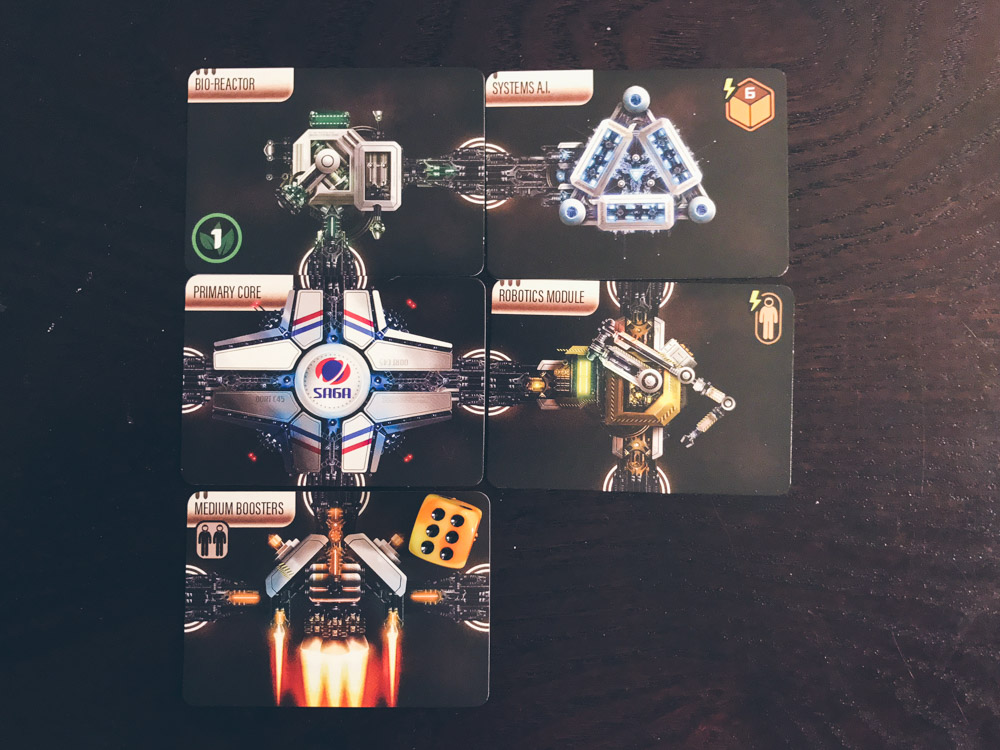 I’m notorious for building pitiful ships, but this one was alright.

Farlight does play relatively quickly, with games topping out at around 40-45 minutes. While evaluating ship parts and actions on the board takes some time, I find I usually forget to examine the state of my space vessel and which ports I have open. Like a less silly Galaxy Trucker, ship parts are added to each player’s vessel both horizontally and directionally uniform with previously attached cards. I can count 4-5 times between a few games where I only thought about my bidding tiles and not if the part I won could even be attached to my ship. There is an action to refit your ship and discard poorly placed parts, but if a player can’t attach a part, it’s tossed into the ether. This means there are plenty of ways to muck over another player’s strategies if one plays close attention to each individual’s board state.

Thematically, this is not a game of gigantic space empires anathematizing one another before declaring war. This is a game of “local” space exploration and colonization of those planets and moons within reach. While multiple players can achieve the same mission, only the first bidder gets a shot at full points, while those behind will only score half points. Each player’s corporation might not have accomplished a mission first, but corporations still unify for the goal of making our solar system habitable and approachable. This is another extremely forgiving aspect of Farlight, but continues the goal of making it noticeably accessible for new players without as much modern gaming experience. 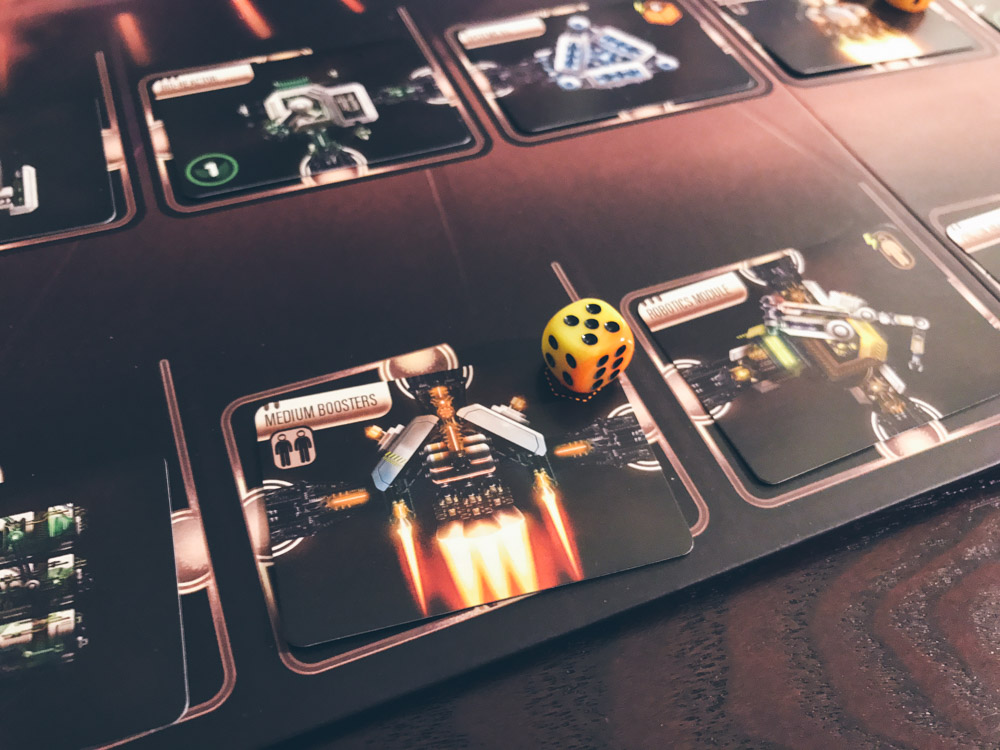 These ship parts are key to victory.

On the table, Farlight looks great. Players set out a number of ship parts and roll vibrant orange dice to determine engine strength. An interstellar speedometer of sorts decorates the center of the board, acting as a meter detailing each player’s score. Mission cards depict the launching of space colonies and exploratory trips to various moons around our solar system. One tiny notice on the board explains players can turn three crew members into bio-tech for… mission purposes.

Missions and action resolution are fascinating. Main actions (crew members, gaining science, etc.) are resolved before taking ship parts or missions. Because ship parts come before missions, players can effectively bid on missions they are currently unable to accomplish, with hopes for getting the appropriate parts or resources before attempting the mission. This makes for a lot of intrigue and risk as players try to get both a high value ship part, and be the highest value on a mission card. It’s quite common to attempt this and only get one of the two, which effectively means it was a failure. Taking risks like this is a high point of excitement for Farlight.

Farlight doesn’t solely give out points from missions, but the space industry also awards five points to three lucky winners who’ve prepared accordingly. These are things like collecting the most crew members, or having the most open ports on a ship (Vlaada Chivatl would cringe). Farlight makes an excellent case for preparation, as most games should end with scores pretty close together. If there is still a tie after the industry awards, one random leftover industry tile is drawn from the box, and the player who fulfills this award takes the cake. It’s interesting because players almost need to ready for this to happen.

I can only hope I’ll see more in the way of space exploration and interstellar discoveries in my lifetime. While I’m waiting, games like Farlight exist so I can have my introductory-bidding space cake and eat it too. 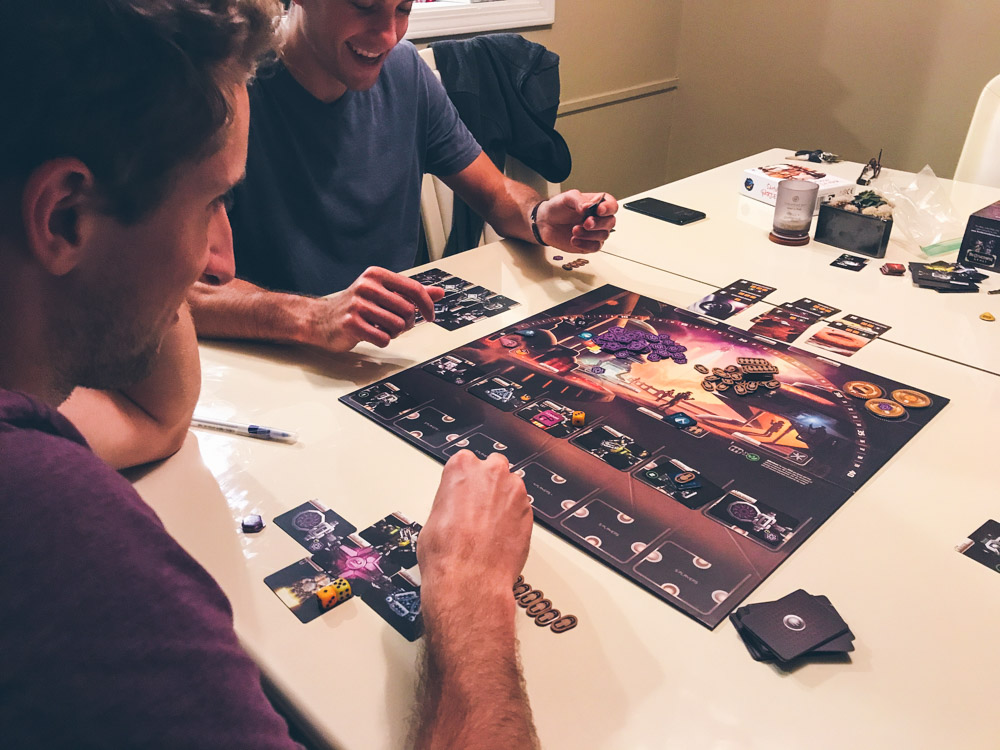 A review copy of Farlight was provided by Game Salute.

Farlight is a very good bluffing game with a great presentation, an exciting theme, and becomes one of my top recommendations for introducing bluffing/bidding/auctioning mechanics in tabletop gaming.