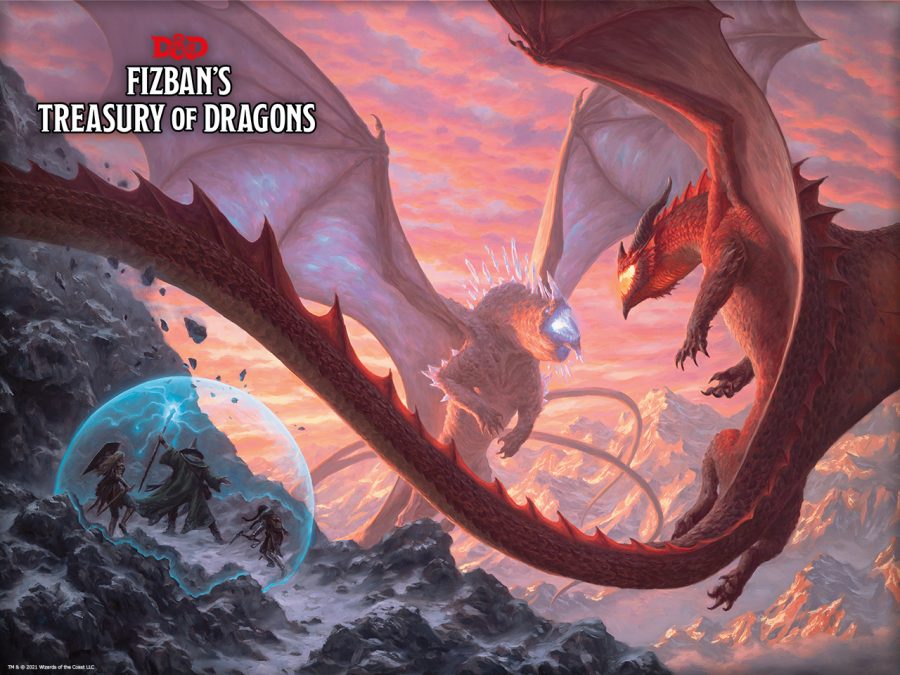 Fizban’s Treasury of Dragons is a D&D supplement book that gives much greater in-depth information for players and Dungeon Masters looking to add more dragons to their games. Players will find Dragonborn, Monk, and Ranger options as well as feats accessible to any class. DMs will find information on dragon magic, lairs, hoards, and a lengthy bestiary detailing the different types of dragons and their possible motivations. So is it a book worth hoarding, or something you could let fly on by? Read on for the review!

Surprise – this book has a lot of information on dragons and a fair amount of magic too. Many of the pictures feature different kinds of dragons in differing forms of flight, on the ground, fighting, and about to fight. There are a few pictures of humans or humanoid creatures fighting, sitting, and practicing magic as well.

Fizban himself is a bit of a mystery. The book never comes out and says it, save for a couple of the image descriptions, so I won’t ruin it for you here, but he offers several humorous asides in the form of notes in the sides and margins of the pages, much like Tasha did in her book. Fizban’s Treasury is broken down into 6 chapters, each giving readers different draconic options for incorporating more dragons or dragon-inspired options into their games.

Chapter 1 is all about character creation, and how one might add more dragon flair to their characters themselves. Players might want to make a Chromatic or Metallic, or even a new Gem Dragonborn. Also available are some subclass options, such as Way of the Ascendant Dragon for Monk or Drakewarden for Rangers. Because who wouldn’t want a Drake companion to ride into battle or just to get around? There are also a handful of draconic feats that any character could access given the optional feat rule, including Chromatic Infusion, Telekinetic Reprisal, and Protective Wings.

The second chapter is all about dragon magic, including spells, magic items, hoard items, and draconic gifts. As expected, most spells are dragon-focused, but I’d really like to be there to see someone cast Nathair’s Mischief in a game. The items are all incredibly powerful-sounding, many letting players either call on a dragon construct or use dragon scales in imaginative ways, such as the platinum scarf or the topaz annihilator (a rifle powered by a topaz dragon scale). The hoard items section was interesting to me, as I didn’t know that leaving an item in a dragon’s hoard would make it more powerful. This chapter details how weapons, items, vessels, and ornaments are all affected differently. Draconic gifts are similar to permanent bonuses/feats and can be earned when a dragon dies.

Chapters 3 and 4 are linked, giving readers insight into how to incorporate dragons into their games, and how their lairs and hoards will affect the game world and its inhabitants. DMs wanting to learn different ways to introduce them will also like these chapters, as they give many different options and viewpoints that could easily be used as plot hooks to start adventurers down a path to find a hoard or encounter a dragon.

After that, chapters 5 and 6 make up the meat of the book. Chapter 5 gives information about all the different types of dragons, and chapter 6 provides stat blocks for different dragons and draconic enemies and NPCs. Each of the entries in chapter 5 are greatly fleshed-out, with tables to roll on for traits, ideals, adventure hooks, and connections, as well as a map of an example lair, descriptions of environments, and what treasures players are likely to find.

Overall this is a great book if you’re looking to run a dragon-focused adventure, and I was pleased to learn a little bit more about dragons in the world of D&D. However there isn’t any premade adventure in this book, so DMs will have to take one of the possible plot hooks and run with it (not a terribly difficult thing to do, but definitely more work and time involved). In the end Fizban’s Treasury of Dragons would make a fine addition to any collection of D&D books, but I’d be hard-pressed to call it a “must-buy.”

Fizban’s Treasury of Dragons would make a fine addition to any collection of D&D books, but I’d be hard-pressed to call it a “must-buy.”