Fantasy Wargames in the Frozen City 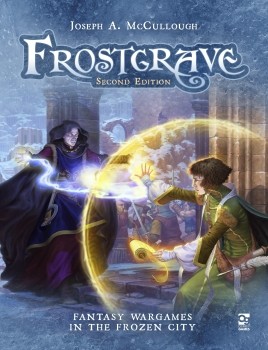 The city of Felstad used to be the center of a magic-infused empire, with all the libraries, potions, items, and workshops that a Wizard could want. One night, a foolish caster loosed a magical blizzard that engulfed the city and surrounding areas, turning them into a “frozen wasteland.”  As the centuries past, the history of Felstad turned into myth as the nearby villages coined the term “Frostgrave” for the dangerous ruins that draw in brave adventurers, some never to return.

Frostgrave is a fantasy wargame where players take control of Wizards who lead Warbands made up of an apprentice and several soldiers. In this second edition, the author has made several updates and accessibility tweaks to the rules, as well as added in twice as many scenarios as the original. So is it a blast to visit the city formerly known as Felstad, or is it best to let it go? Read on for the review! 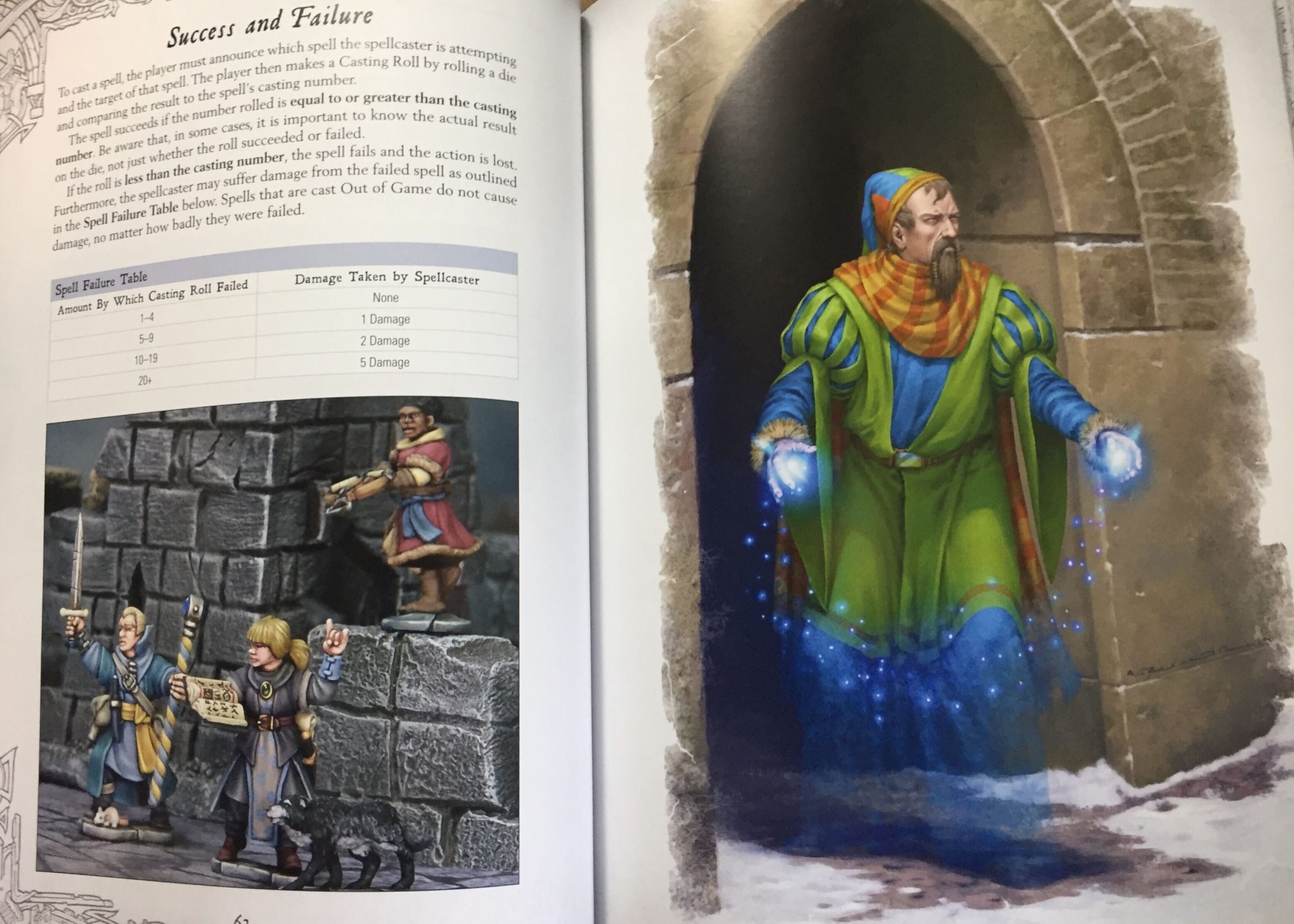 Players will keep track of wounds on paper, much like an RPG. During play PCs can be knocked out or killed, or receive various wounds after a round is over. A few of the illustrations feature blood, with characters being attacked by weapons or wild animals.

Demons and other evils

Players may find themselves fighting with various demons, imps, skeletons, or other animated constructs common to the fantasy setting. Players may also choose to make their Wizard follow various schools of spells including Necromancer, Summoner, or Witch.  One illustration in the book shows a Vampire-looking creature standing over some kind of zombie eating a raw, bloody meal.

Frostgrave Second Edition tasks players with creating a Wizard, hiring an apprentice and soldiers, and venturing out into the frozen rubble to seek riches and magical rewards. To be honest, at first glance I thought it was an RPG book, but Frostgrave is a wargame, something I have less experience with but is still an interesting and highly popular section of the larger Tabletop pantheon. To sum it up, this game is much more focused on combat than exploration or role-playing, so if the “talky” bits of your D&D games bore you to tears, this might be more up your alley.

Players start by crafting their Wizard character. Chronomancer, Elementalist, Enchanter, Illusionist, Necromancer, Sigilist, Soothsayer, Summoner, Thaumaturge, and Witch are the choices, each with their own Aligned, Neutral, and Opposed schools of magic. The further a certain school of magic is from a Wizard’s chosen field, the harder it is for them to cast. Wizards start with eight known spells: three from their own school, one from each of their aligned schools, and the final two coming from any of the five neutral schools, but they have to be different ones.

Each figure on the board in Frostgrave has a stat-line, explaining their abilities. Stats include Move, Fight, Shoot, Armour, Will, and Health. Anytime a figure makes a stat roll, they will roll a d20 and add whatever stat is being tested, to see if they reach the target number (TN). In addition to dice and their Wizard sheet, players will need a ruler, miniatures and terrain to fill up their table for a game of Frostgrave. Specific pieces are not needed save for a few scenarios in the book, but if a player had a small collection of ruins or broken castle and city pieces, they’d be off to a good start. The book has dozens of pictures of well-painted minis strategically placed in city ruins to go along with the illustrations. 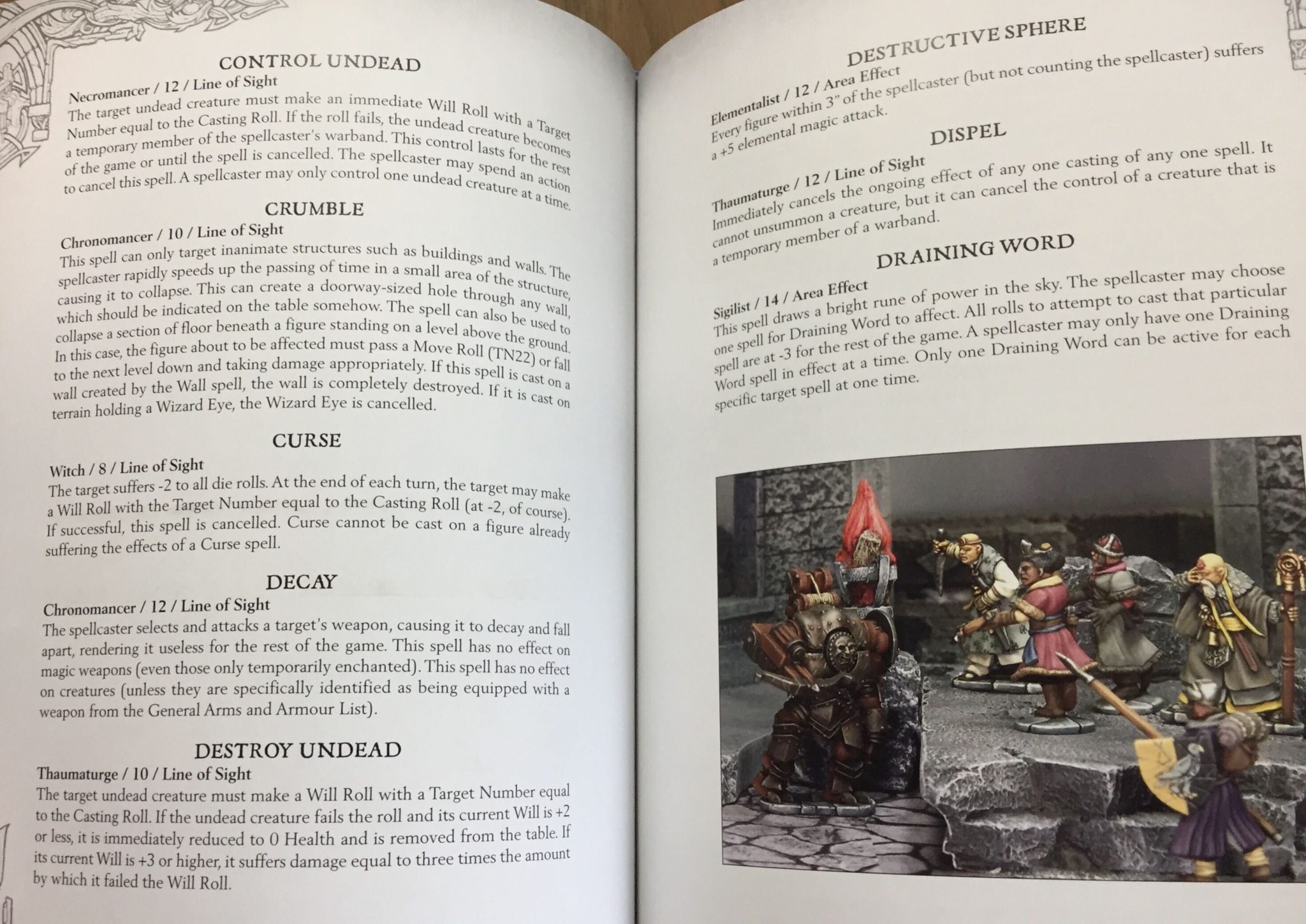 After finishing up their Wizard, players will want to hire an apprentice (who may end up as a successor should the Wizard fall) and a Warband of soldiers, who can take care of the little things like hand-to-hand combat, charging into battle, and collecting lost riches. In a Chess metaphor, your soldiers are your pawns and the apprentice is a bishop. The apprentice can do most things the Wizard can, just not as well, but it helps to have another caster in the group.

Combat – the meat and potatoes of Frostgrave – is determined by dice. The two players each roll a d20 and add the figure’s Fight stat plus any modifiers, and the highest number wins. After subtracting the opponent’s Armour stat and adding any modifiers or damage multipliers, if the final total is greater than zero, the loser of this combat takes that many points of damage to their health. If the total is zero or negative, they take no damage. The winner of the combat can choose to stay put or push themselves or the combat loser 1” away. 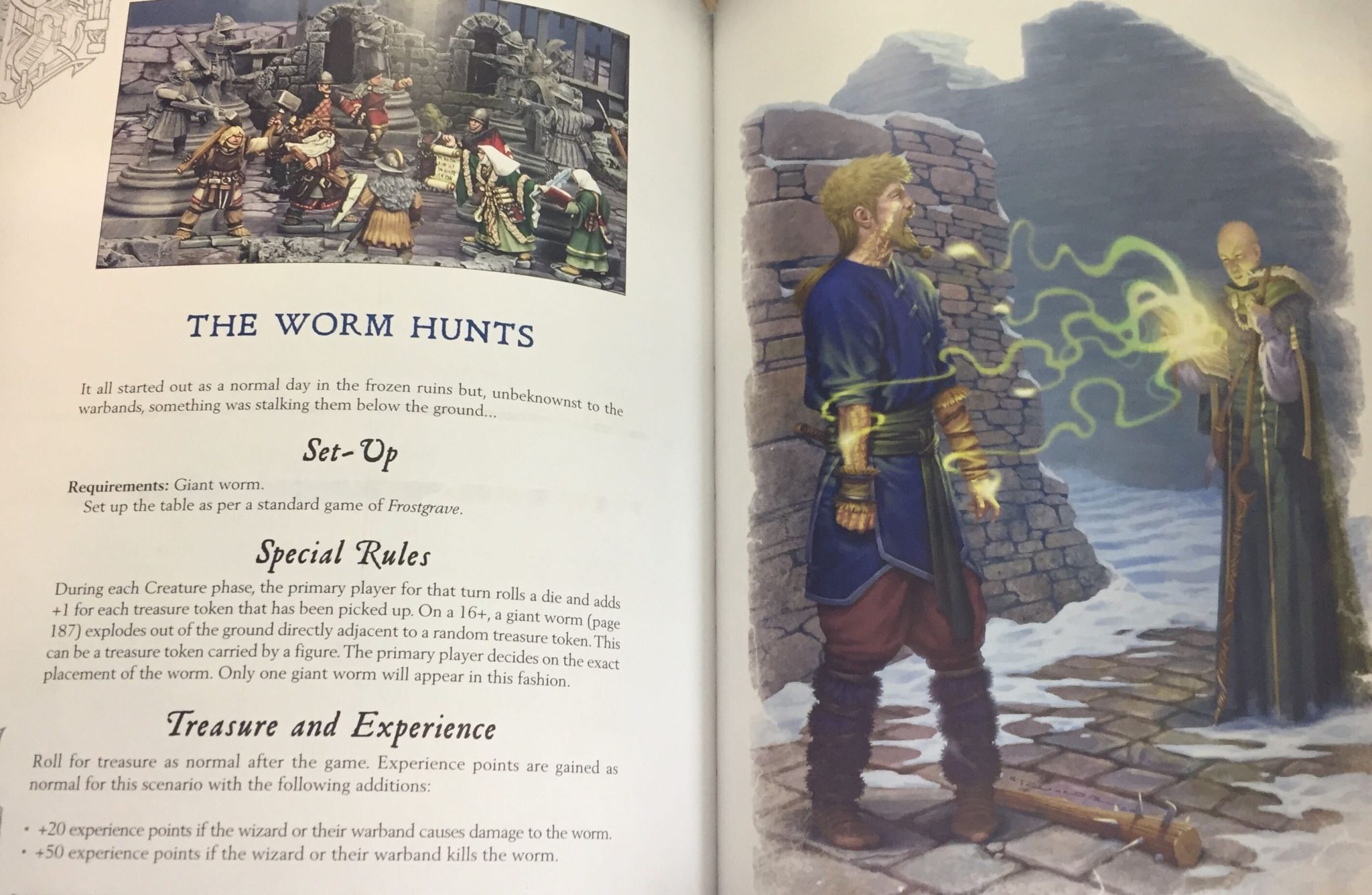 Besides the chapter on spells and their explanations, I was really looking forward to reading chapter five: Scenarios. Here the author listed the 20 different scenarios for setting up a game, with cool sounding names like, “The Well of Dreams and Sorrows,” and “The Treasure Phantasmal”. However each one ended up just being a one-page or less entry with a suggested set-up and 1-2 special rules. There is not nearly enough lore or flavor text for someone (like me) who really likes flavor text, but I kept reminding myself that it’s not an RPG book, it’s a Wargame book. Still, it would have been nice to see a little more backstory than the introduction and the occasional blue sidebar of a sentence or two. 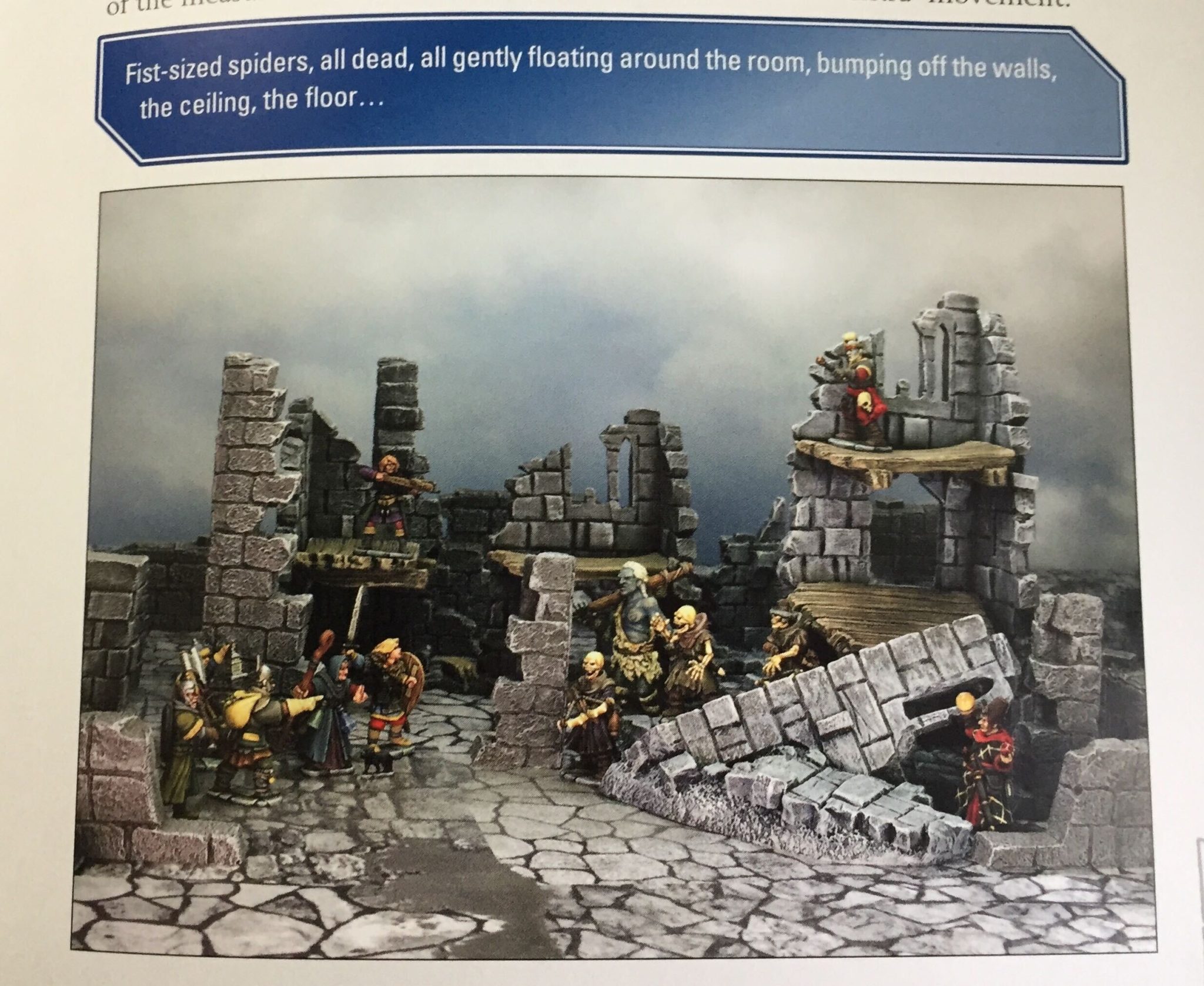 In conclusion Frostgrave Second Edition has a lot to offer if you’re looking for Wizard combat with light RPG elements. The book has everything you need, knowledge-wise, to start building your warband and getting ready for battle. After you add some terrain and minis, you’ll be casting spells in no time.

If you're looking for a Tabletop version of Spellbreak, look no further.