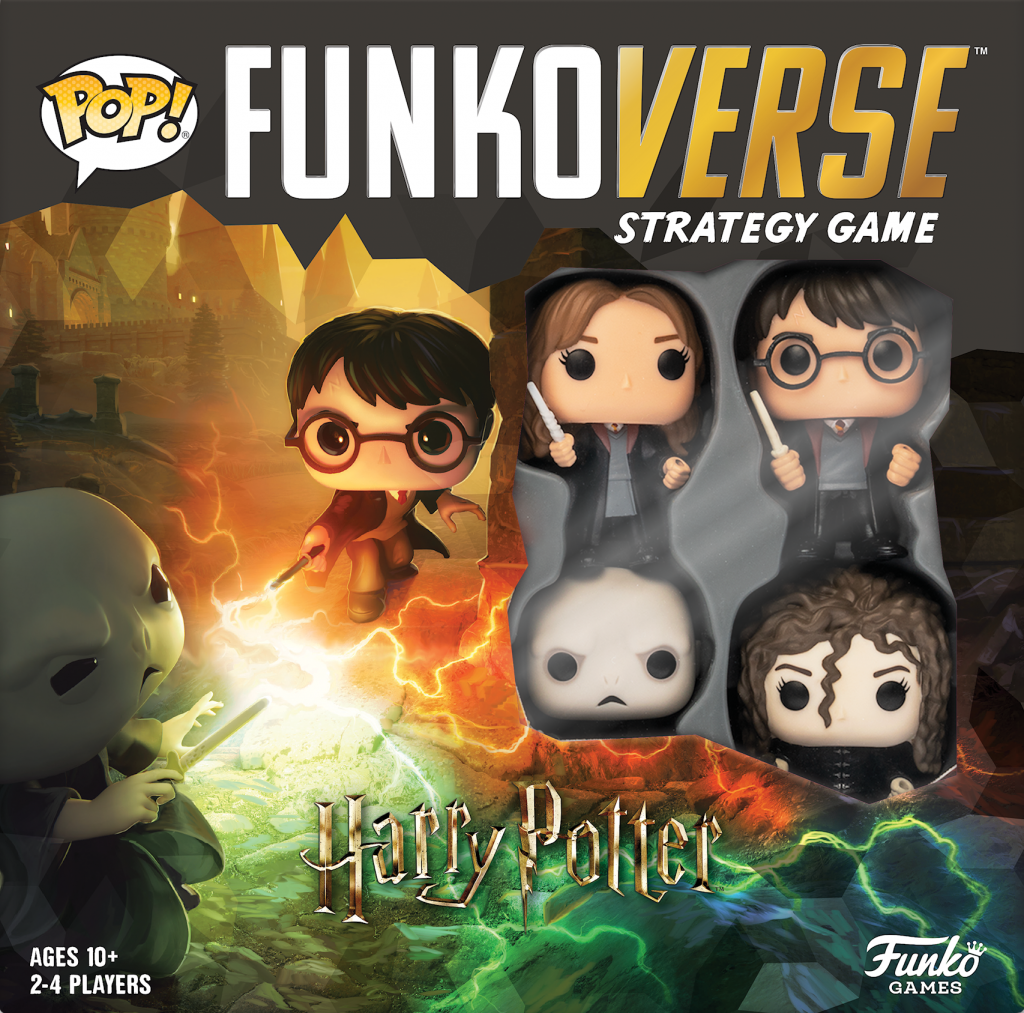 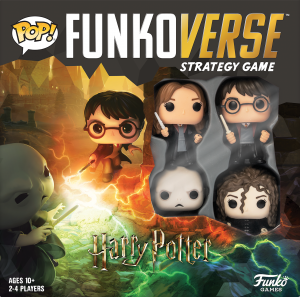 Funkoverse Strategy Game takes Funko’s much-loved Pop!s and pits them against each other in a wild tabletop skirmish! This (primarily) 2-player game allows players to mix characters from a variety of fandoms, providing great potential for customization. In addition to being an enjoyable gaming experience, it is strongly thematic and highly replayable.

Looks can be deceiving. At first glance, Funkoverse Strategy Game might seem like a soulless cash grab, meant to capitalize on the popularity of all things Funko, but it is soooo much more than that.

Funkoverse is a miniatures skirmish game in which each player controls a team of Pop! characters as they duke it out on a board. Multiple sets of the game are available, with themes ranging from Harry Potter to Jurassic Park to the Golden Girls. Whichever sets players have, they can mix and match characters to make teams that normally exist only in nerdy fever dreams. 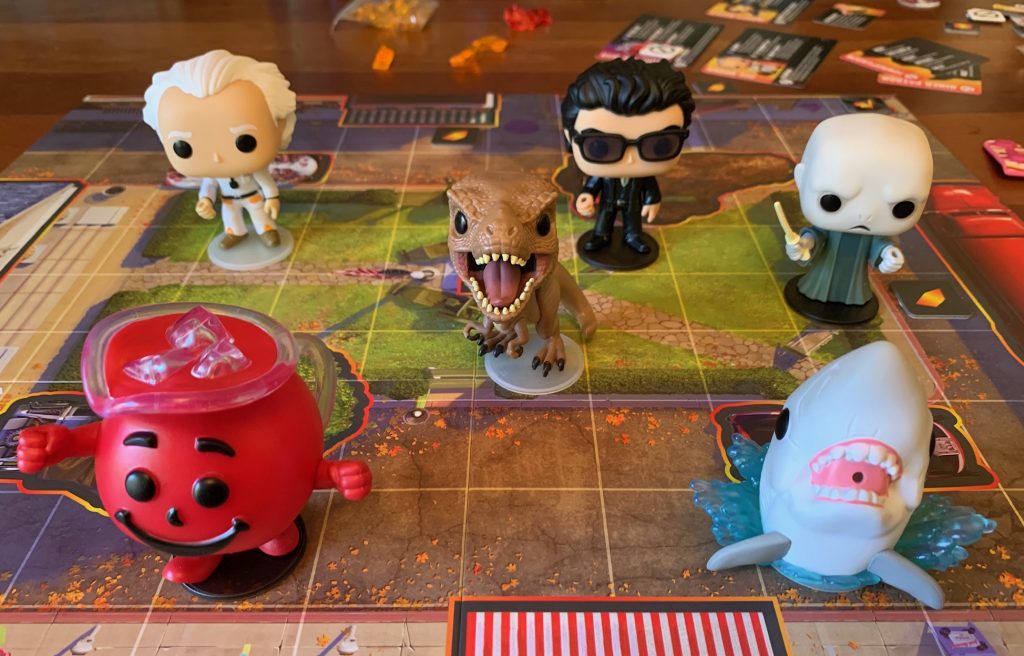 The cast of characters from an actual game I played. It was wild.

The gameplay is scenario based, so objectives can vary from session to session. One scenario, as an example, is a capture-the-flag-style race to a certain number of points, where points come from reaching the opposing flag, finding point tokens on the board, and KO’ing opposing characters. At the start of the game, players set up the board according to the chosen scenario.

The game is played over a series of rounds, in which players take turns activating their characters one at a time until all characters have been used. Each character can perform two actions on their turn, which can be:

Each character has a corresponding card that lists their unique abilities. The lower-right corner of each card also shows 2 colored dots, which represent the types of abilities that character can perform. 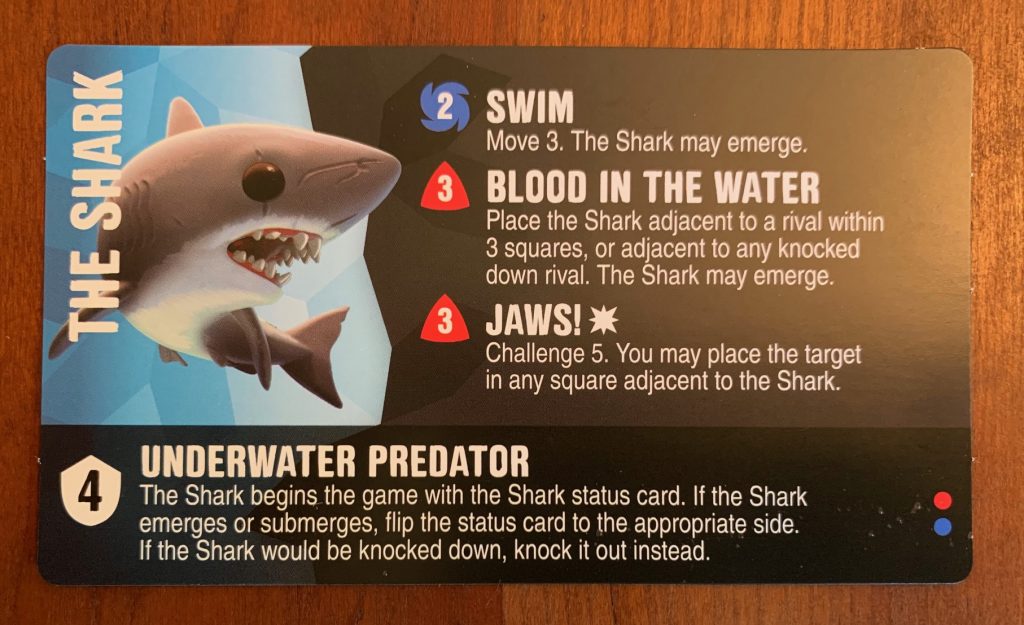 At the start of the game, players take tokens matching these dots. If a player wishes to activate an ability, they must spend a token of the required color, placing it on their “cooldown track,” on the space of the indicated number.

This is a pretty neat part of Funkoverse. When something gets placed on a player’s cooldown track, it remains there until it is pushed off. At the end of every round, everything on players’ cooldown tracks slides down 1 space. When something “falls off” the track, it becomes available to be used again. In practice, this means that if a token was used to activate, say, a 3-value ability, the token would be placed on the 3 space on the cooldown track, unavailable for the following 3 rounds. 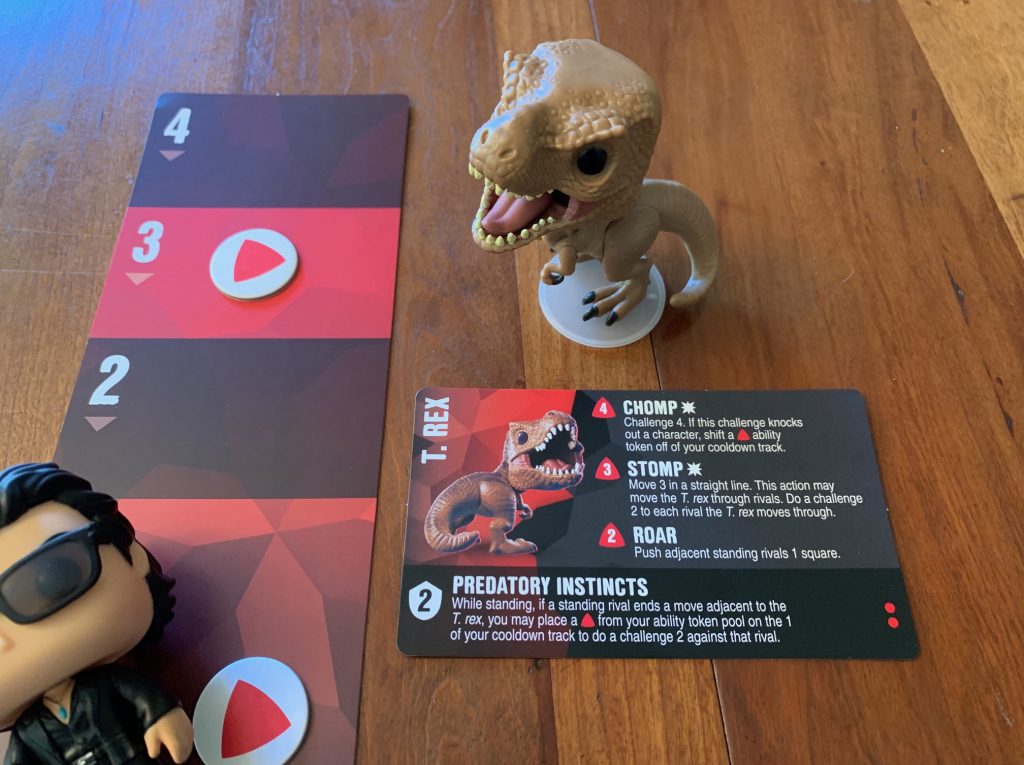 Suppose the T. Rex just used the “Stomp” ability. This required him to put a red token on the 3 space of his cooldown track; it will spend the next 3 rounds moving down the track. Thankfully, another red token is just about to fall off, so he will be able to use another special ability shortly.

When a challenge occurs, the active character rolls dice to determine the strength of the attack. Normally, 2 dice are rolled, but special abilities can modify this. The defending character then rolls dice equal to their defense value, which is shown on the lower-left of their card. 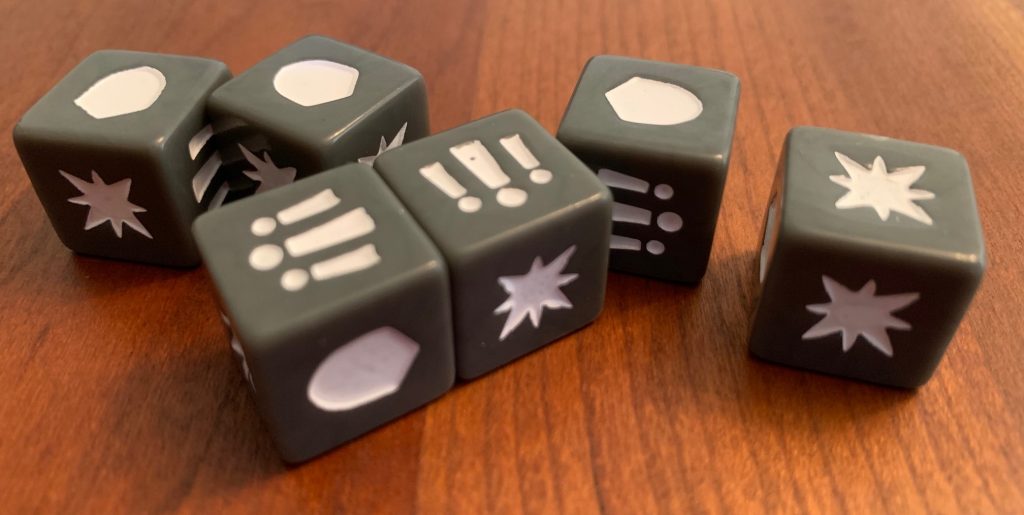 The possible die results are:

If the active character rolls more hits than the defending player rolls shields, he/she wins the battle and knocks down the opposing character. If the opponent was already knocked down, he/she is KO’ed instead and placed on space 1 of the cooldown track. 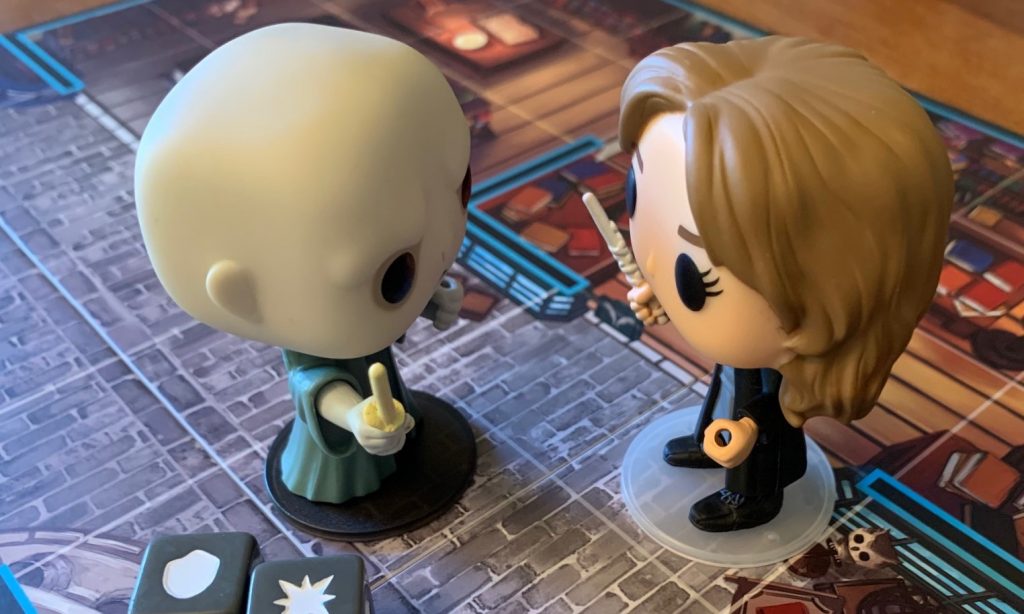 The game’s strategy largely comes from making shrewd use of special abilities. Every character has unique strengths that make them cool, and figuring out how they work in conjunction with one another is a huge part of the fun.

The game continues until a player triggers the endgame condition, which again, will be scenario specific. At that time, the winner will be decided based upon the scenario objective.

I am far from a Funko aficionado. While I have a few Pop!s on my desk, my sorry excuse for a collection pales in comparison to most fans out there. I don’t say this to be disparaging; quite the opposite. The fact is even I, a person with little buy-in to the Pop! craze, found Funkoverse to be an absolute blast. This game is hysterical, a perfect first offering from Funko Games.

What makes Funkoverse so cool is the same thing that makes Funko products cool in general: they offer something for everyone. Just as Pop!s exist for every fandom known to man, Funkoverse allows players to customize their games to their liking. If you have ever had a lengthy argument about whether the Kool-Aid Man and Voldemort could take Jaws and Batman in a fight, this game lets you find out. (Also, can I be your friend, please?) 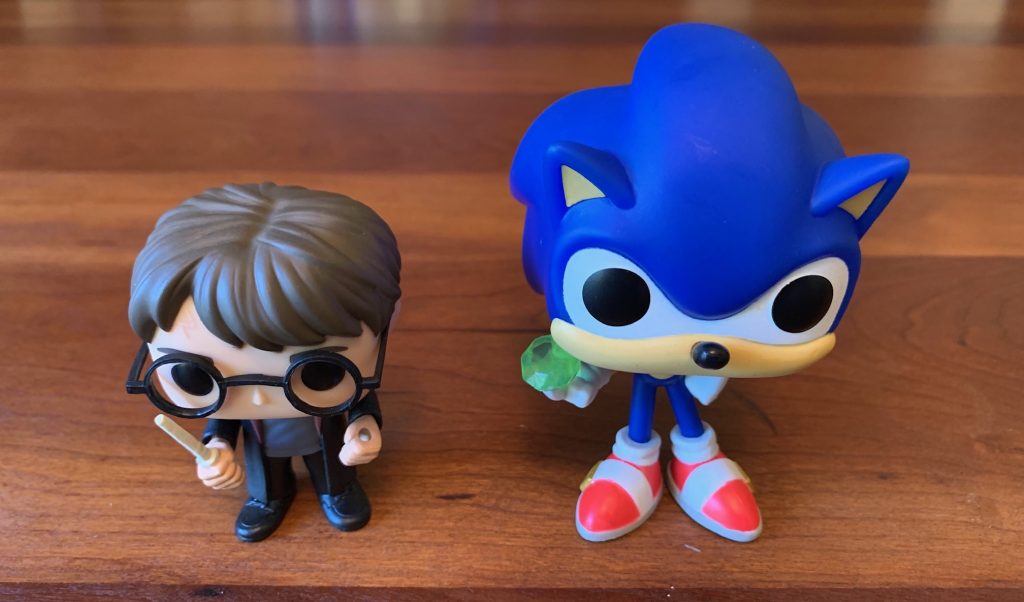 Mechanically, Funkoverse will feel familiar to anyone who has played games like Krosmaster Arena or Star Wars: X-Wing Miniatures Game. Both of these are titles I enjoy, but personally, I like Funkoverse better than either them, for a couple of reasons.

For starters, Funkoverse does away with the traditional squad-building rules that are common to this style of game. Rather than making players add up squad values to form a team, Funkoverse simply says “pick any 2 (or 3) characters.” It’s way simpler and allows players to dive into the action more quickly.

Secondly, Funkoverse‘s gameplay is super streamlined, and it moves along at a pleasant pace. In particular, I love the cooldown track idea; it’s so intuitive, I’m frankly surprised I haven’t seen it used a dozen times before.

Lastly, and most importantly, this game manages to be both hilarious and extraordinarily thematic. Characters’ abilities always suit them perfectly. For example:

And so many more like these. Thematic integration is always a huge positive for me, and this game delivers it in spades.

Funkoverse way exceeded my expectations. I am honestly blown away by how much I enjoyed this game; it gets a major recommendation from me. If you pick it up, I highly suggest getting 2 or 3 different sets, whether base games or expansions, so you can mix and match characters. After all, that is really where the fun lies.

Review copies of several Funkoverse sets were generously provided by the publisher.