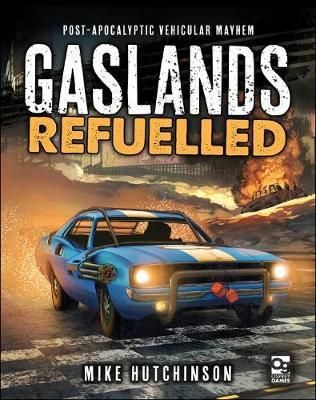 In the near future, corporations have taken over everything, and Earth is a wasteland. Gaslands is a televised sport, where the winner of this season’s races will get a one-way ticket to Mars! Players in Gaslands: Refuelled control cars or teams of cars that they move with templates based on what gear they’re in, then roll dice to see if they’re able to shift, slide, or cancel other dangerous maneuvers. Besides road hazards, players must also watch out for opponent’s cars and weapons systems, lest they may find themselves spinning out or getting wrecked! 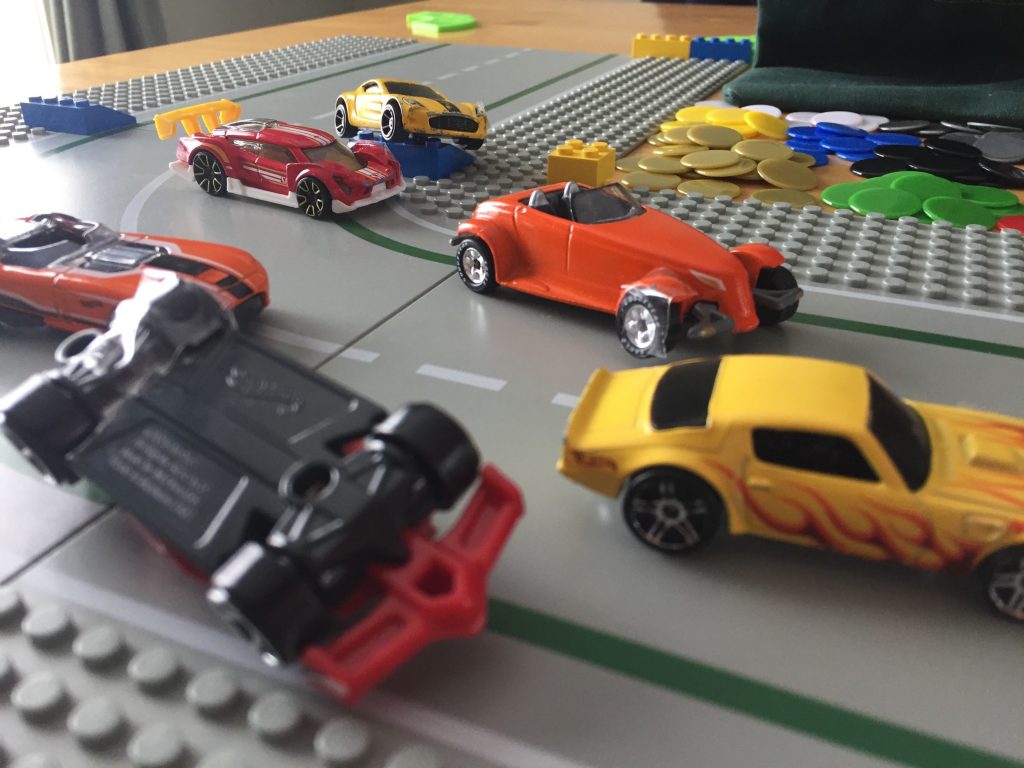 I’m kind of annoyed that no one told me about this game sooner. As in, before I amassed an armada of X-Wing Miniatures ships capable of being played by 6-8 people with 3 different factions.

Like X-Wing, Gaslands: Refuelled is a real-space game, and it operates on a similar system of using a template/ruler to move a vehicle a specific distance on the table. For the price of an X-Wing starter pack, you could buy the Gaslands rulebook, some D6’s, and a few toy cars and you’d be set to play for life (after printing the movement templates in the back of the rule book). Gaslands is a great blend of X-Wing and Formula D, and allows for players to customize and trick out their miniature rides. In case you were wondering, the “Refuelled” part of the game title refers to this being an update to the original Gaslands book, published in 2017. 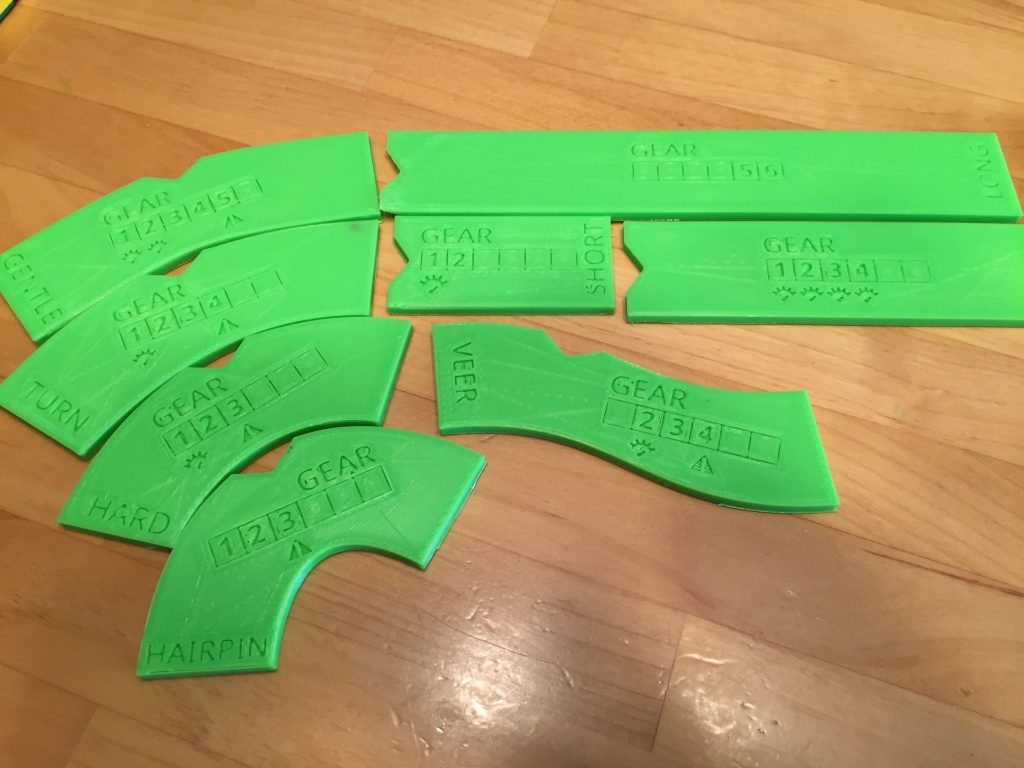 With the advent of 3D printing, it is easier than ever to set up your own templates.

In the near future, Earth is an apocalyptic wasteland controlled by Martian corporations. Racers are competing in the titular event in hopes of winning a one-way ticket to the Red Planet. The setting feels like a blend of several Arnold Schwarzenegger movies, especially Total Recall and Running Man. The theme is completely ignorable, but I enjoyed the alternate-timeline reality and how much detail was put into it. 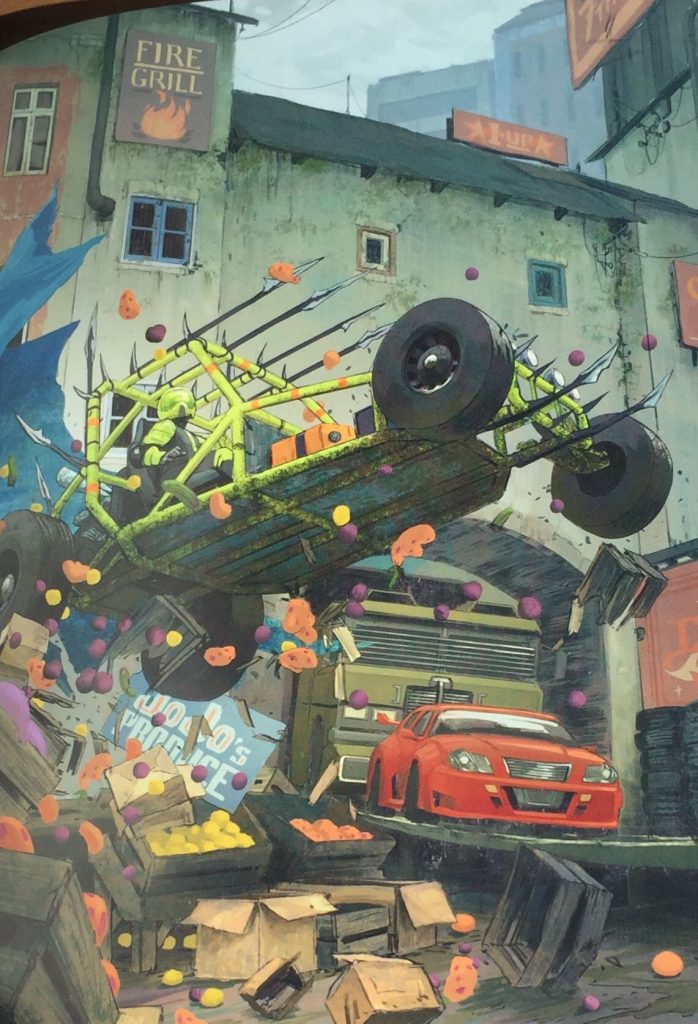 The artwork is bright and fun, and skews slightly more campy than scary or gritty.

Players activate their cars in turn, moving them a number of times equal to the gear they are in. This means a car in 4th gear will get to move 4 times, assuming they don’t shift. After picking a template, you place it in front of your car, and roll any skid dice up to your handling score. Shift dice can be helpful, but also disastrous if rolled low. Results of 1-3 give the player hazard tokens, which can lead to wipeouts and wrecks. 2 and 3 also give the player slides and spins, which can occasionally prove useful but are especially dangerous in a crowded lane. 4-6 on the dice equal Shift results, which can be used to either cancel out other results or move up or down a gear (which also gives players a hazard token). After reconciling any skid dice, players move their car to the end of the template, and resolve any collisions. This continues until all the cars have moved, then players may shoot at each other.

Shooting definitely felt skewed in favor of the attacker, as they roll for their weapons and hit on 4-6, with 6 being a critical (double) hit. Defenders get a number of D6’s equal to their current gear,  but only 6’s allow them to evade. Each car is equipped with at least a handgun for each crew member according to the rules. So a car with two crew would get 2D6 on their attack, with a 50% chance to hit; the defender would get 1D6 in first gear with a 16% chance to dodge. The advanced rules outline how much you can trick out your car – each vehicle is only allowed so many slots for weapons and upgrades, so you can’t just load up your muscle car with every weapon in the book. On average the number of slots for a car or truck is 2-3, which will allow you to have a couple of good weapons or one really big one. Some weapons are even restricted by which sponsor you choose (there are several to pick from). Sponsors imbue certain abilities and power ups on their teams or let them purchase certain vehicles or upgrades. They also add another level of world-building and flavor that I really enjoyed. 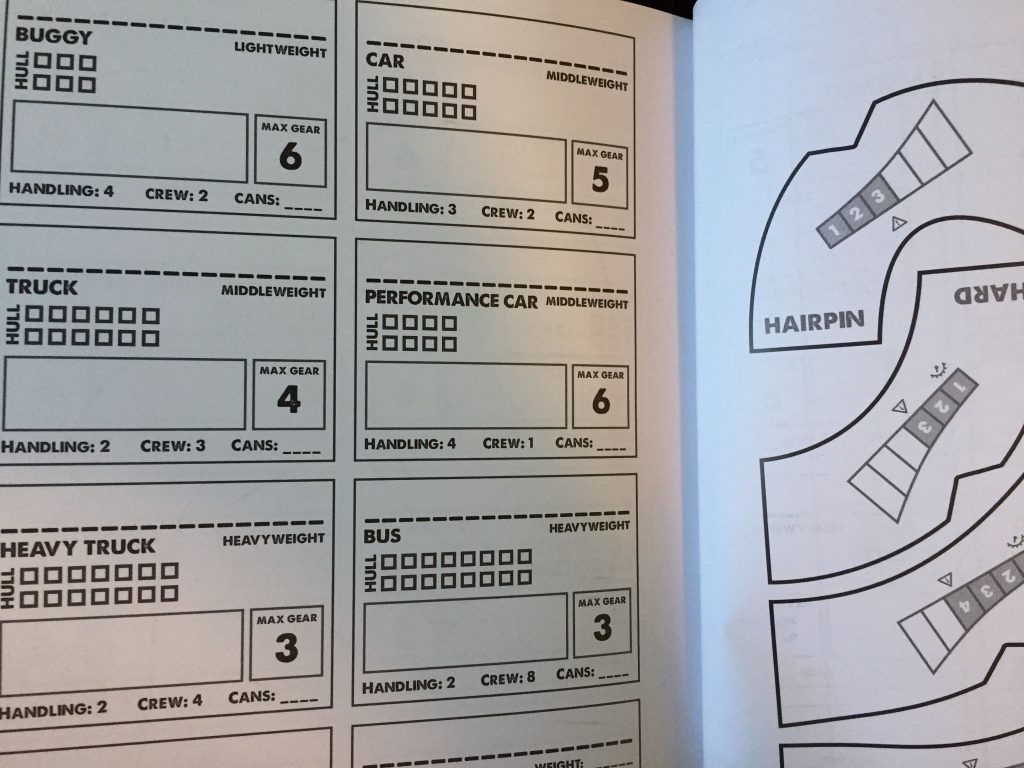 The back of the rulebook has car templates and your movement templates which can be photocopied and placed on to cardboard for a cheap option.

The rulebook itself is well-written, but it should be noted that you may want to read through it fully before inviting your friends or gaming group over to smash together tiny, tricked out cars. Only on a second read-through did I realize there were a couple rules I had messed up. Some of the fault definitely lies with the reader (me) but I would have liked to have seen some page references in the quick rules section in the back; this would have made finding answers much snappier. There is a table of contents in the front, however, which will quickly get you wherever you need to go in the 192-page tome. It’s not too hefty compared to the average RPG rulebook, but it is more than you will want to read in the 5 minutes before everyone arrives for game night. It also includes scenarios and a campaign for players to play through. As a side note, there is one particular rule that I found amazingly entertaining – The Rule of Carnage. This rule states: “In Gaslands, if a rule is unclear, choose whichever option results in the most carnage for all concerned. This is The Rule of Carnage.” 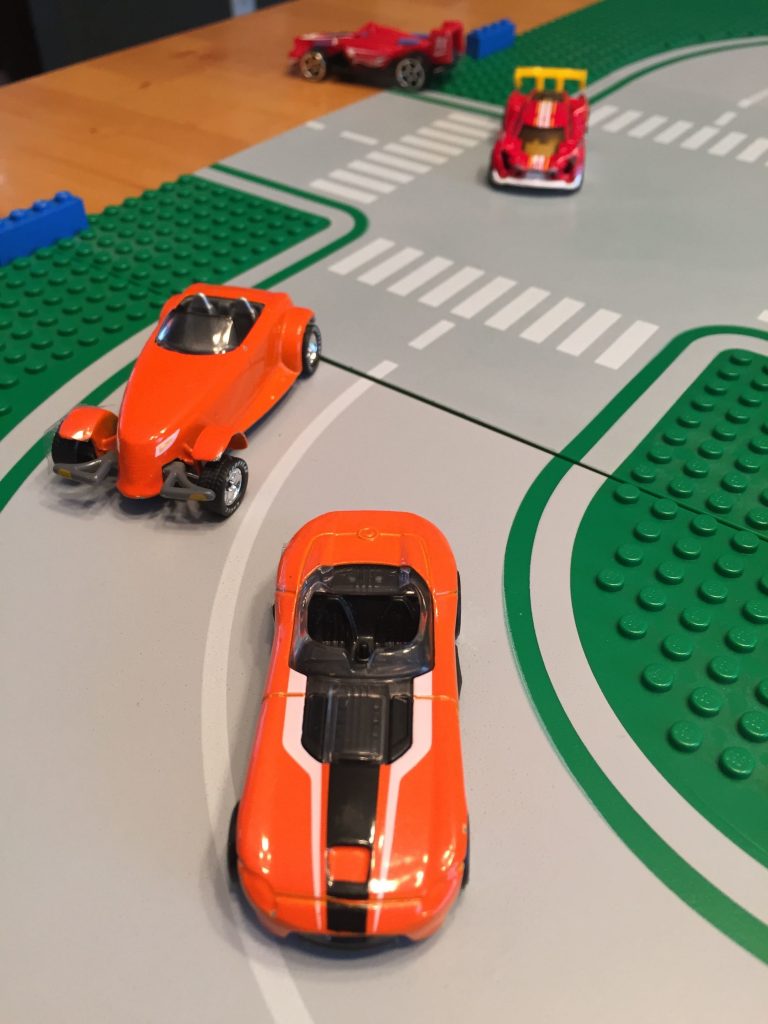 The red car isn’t confused, he just resolved a spin that he couldn’t cancel out.

One of the biggest draws to Gaslands is its minimal material requirement; all you need are some dice, toy cars, and someone with the rules and templates and you’re good to go. You could spend a few minutes or a few hours preparing your race team and cars – it’s entirely up to the players to decide how much time and effort they want to put into their vehicles. The rulebook gives players some good ideas and starting points, albeit professionally painted and tricked out, but there’s nothing stopping you from using whatever you have on hand. I just decided that Lego roads made for a good race track. The book even states that if you wanted to you could race around salt and pepper shakers. I love the utilitarianism of that, and how accessible it makes it compared to many traditional tabletop RPG’s. And what better way to celebrate the game’s dystopian sci-fi setting than racing in whatever car or scrap heap you have lying around? If you have the means, I suggest you check this race out.

Gaslands: Refuelled is a fun game, and easy to recommend. If you already have a few extra dice and toy cars lying around, then you're already halfway to playing. Being able to customize your ride and physically alter its appearance to your liking only extends the shelf life of the game, and opens it up to fans of mini-painting and customizing. Good fun, a high level of customization, and an inexpensive price point; what's not to like?