Review – Gladiator: Fight to the Finish 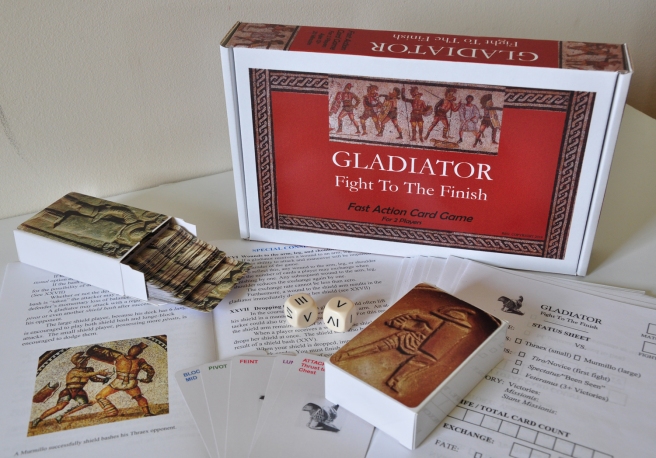 Gladiator: Fight to the Finish is a fast-paced, 2-player card game about gladiatorial combat in the Colosseum. Does this low-budget game get dragged out of the arena, or is it an unlikely victor?

After choosing their decks, the players fill out a gladiator sheet, naming their gladiator and tracking damage throughout the fight. This allows for a minor roleplaying element because the more a gladiator wins, the more a player may care about him, and the more other players may want to eliminate him. Veteran gladiators also receive some gameplay bonuses.

Each fight is played out in multiple rounds. A round consists of:

…and so on until a gladiator runs out of cards. Players can only attack or defend with cards they currently have in their hands. Here’s a short example of the back-and-forth nature of Gladiator:

Attacker: “Cut to the leg.”

New attacker (previously the defender): “Lunge, thrust to the gut.”

Same attacker (because defender played step back): “Thrust to the chest.”

When a gladiator runs out of cards, a new round begins, and the gladiators draw back up to their current health total. Fights usually end in 2 ways: a gladiator is slain, or a gladiator pleads Missio by throwing their cards on the table and holding up their index finger (just like the real gladiators did). If a gladiator is granted Missio based on the dice roll, they lose the fight but they live to fight another day.

In a tantalizing bit of deception, Gladiator allows for lies in the feint cards. As the attacker, instead of announcing what you’re actually doing (feinting), you can say, “slash to the leg.” Your opponent would usually then block, but when you reveal your feint card you get to attack again, and hopefully your opponent is much weaker now that they’ve wasted a block card.

There’s also some fun in using special attacks like shield bashing and stacking pivots and/or lunges on normal attacks. Gladiator is all about using your attack cards to their full potential and making your opponent waste as many of their defense cards as possible. The winner is usually the player who consistently maximizes their hand.

Gladiator is at its best when both players know what they’re doing. Announcing things like “thrust to the chest” or “pivot thrust to the throat” and hearing the defense of “block” or “pivot” makes Gladiator feel like a dance. Once players understand the game, these fights usually last only 10-20 minutes, but so much happens in those few, fun-filled minutes. Gladiators will lose their shields, take 3+ damage in a single round only to claw their way back to evening the odds, and weigh the risks of pleading for Missio or continuing the fight.

There is some luck in Gladiator, but the decks are meticulously balanced so that, as long as a fight lasts longer than 3 rounds, the luck is mitigated. The production quality is not as high as some other games from big-time tabletop companies, but there’s also a certain charm to a game that’s clearly a passion project. The cards will hold up to multiple shuffles, and the little artwork that is there is good, especially the art based on stone carvings of gladiators. The cards don’t need to be flashy because the game is more about the back-and-forth than looking at cards.

There are two charts that don’t come with Gladiator, but are helpful and fun enough I would recommend getting them. One includes dozens of real gladiator names for the Murmillo and Thraex gladiators, and the other includes helpful tips on different winning strategies.

The main complaint I have with this game is the rulebook. It is not as organized as I’m used to rulebooks being, and it’s wordy and repetitive in places. I found the YouTube playthrough much more helpful than the rules. However, I liked this game enough to co-create a cause-and-effect chart with David Matson, the creator, that contains just about everything players will need to know about Gladiator. After watching a short how-to-play video and reading that chart, players should be ready to play, only occasionally referencing the rulebook during their first few fights.

A redeeming quality about the rulebook is the historical gladiator bits sprinkled throughout. The passion the designer has for gladiators and the tight gameplay (once you figure it out) make this game a solid pickup if you’re into swordplay and gladiators. If the back-and-forth swordplay of Gladiator sounds intriguing to you, give it a try, otherwise, learning the rules may not be worth your time. The quick nature of the game is wonderful and the swordplay scratches my gladiator itch.

Gladiator Games kindly provided us with a review copy.

Gladiator is not for everyone, but if you enjoy swordplay and gladiators in a back-and-forth card game, it's worth checking out.