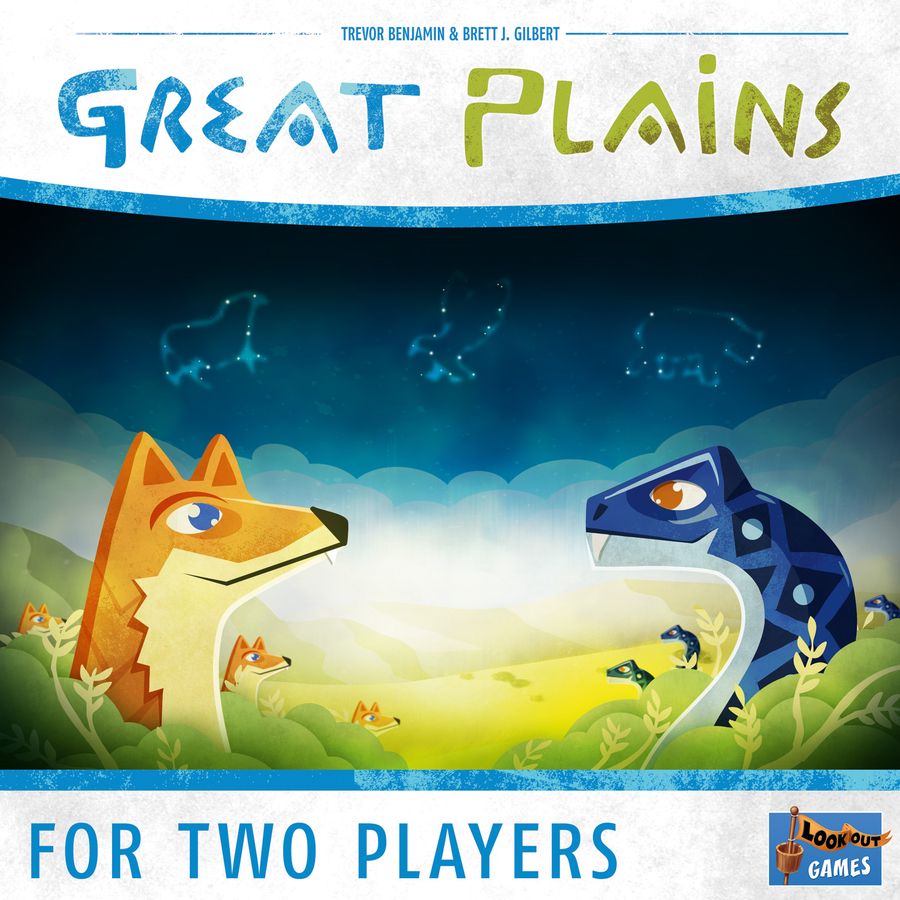 Great Plains is a 2-player game of controlling… well, the Great Plains. This abstract game features fast-moving play, simple rules, and a vibrant aesthetic. Let’s see how the gameplay is!

Great Plains combines area control with a sort of network-building mechanism as 2 players vie for dominance of the land. The game is played on a grid of 7 hex tiles, each showing a number of spaces. The spaces come in 3 types:

To set up the game, players take turns placing their cave tokens on the board. These are the starting points from which tribes emerge. Then, beginning with the player who placed the last cave, players alternate adding tribe tokens to the board until all tokens have been placed.

Typically, tribe tokens must be placed next to either a cave of their color or another like token. In this way, players form lines of pieces throughout the game (hence my allusion to network-building earlier).

Each green space bears an animal symbol. Whenever a player places a token on a green space, they collect a matching token from the supply. Once per turn, the active player may spend an animal token to do a special placement outside the normal rules.

Great Plains is a fast-moving abstract that is easy to get into. Its decisions are interesting, but not very AP-inducing, which helps the game to feel strategic without being brain-melting. The crux of the game is about balancing the need to claim meadow spaces, which provide points, with the need to claim grass spaces, which provide in-game bonuses—all the while being sure to maintain majorities.

The production of Great Plains is nice, with bright colors and attractive art. The rulebook is clear and concise, though I wish there had been a player aid card that described what each of the animal tokens did. Their abilities are not that hard to remember—there are only 3 of them—but it would have been nice for first-time players to have a quick reference.

Personally, my opinion of Great Plains is middling. I recognize that it is well designed, but it didn’t hook me and leave me dying to play again like some other 2-player Lookout titles. I would not turn down an offer to play it, but I also don’t expect to be suggesting it very often. If you like snappy 2-player games, it might be worth checking out, but I’ll probably stick to others in my collection.

If you like snappy 2-player abstracts, Great Plains might be worth checking out. Personally though, I’ll probably stick to other games in my collection.